You are here: Home / Sports / MLB / What Happened To Bobby Bonilla? (Complete Story) 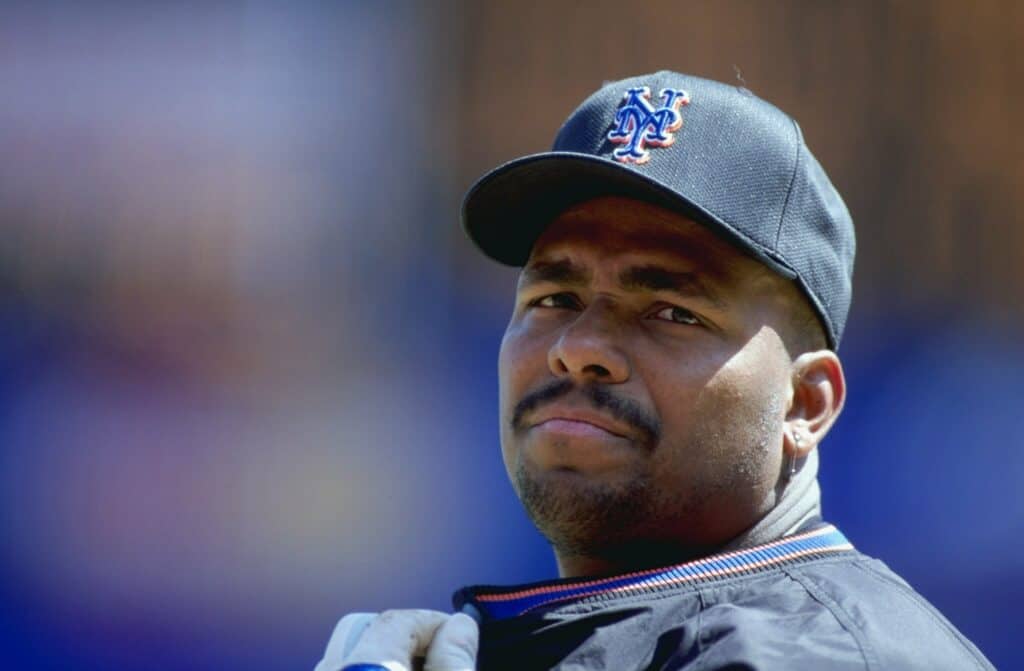 Former Pittsburgh Pirates star Bobby Bonilla was once a perennial All-Star candidate in the National League.

Now, he is forever remembered for his infamous New York Mets contract.

Because of this, his career goes largely forgotten despite being a very productive player at the Major League level.

✅ Upper deck shot at Three Rivers Stadium 🏟
✅ HR’s from both sides of the plate in the same game, twice!

Here is a look at his complete career story, and where Bonilla is today.

Bonilla grew up in the Bronx, N.Y. and quickly became acclimated to the game of baseball.

After playing in high school, he was overlooked in the draft and spent just a semester at the New York Institute of Technology.

However, he attended a baseball camp in Europe where he was recruited and signed by the Pirates.

He entered the Pirates organization at just 18 years old, making his debut in rookie ball in 1981.

It would be a relatively short stay in the minors for Bonilla who quickly showed the ability to hit at a professional level.

The next year, he played even better in double-A, hitting .264 with 11 home runs.

However, he suffered a devastating injury in 1985 when he broke his right leg, causing him to miss most of the season and stunting his growth in the minors.

Regardless of this, the Chicago White Sox selected him during the Rule 5 draft in the offseason, meaning he had to stay with the Major League club during 1986.

Just like that, without making an appearance above double-A, Bonilla was in the majors.

In his rookie season, Bonilla posted good but not great numbers.

With the White Sox in the first half of the season, he hit .269 with just two home runs across 75 games.

However, he was unhappy with the team and was ultimately traded to the Pirates at the trade deadline.

He finished his rookie campaign in Pittsburgh hitting just .240 and posting a .256 clip over the entire year.

The Pirates still saw his potential, and Bonilla hung onto a starting spot in 1987.

It was then that he broke onto the scene, slugging 15 home runs and posting a .300 batting average.

That season established him as a cornerstone in the Pirates lineup and made him a true threat at the plate.

He didn’t stop there either, as his 1988 season would be even better.

His 24 home runs, 100 RBI and .274 average was good enough to earn him his first All-Star appearance.

This started a string of seasons where Bonilla was one of the sport’s best.

However, it became increasingly clear that Bonilla’s defense at third base left much to be desired.

This move gave Pittsburgh one of the best outfields in all of MLB, pairing Bonilla with budding superstar Barry Bonds.

The 1990 season would mark Bonilla’s statement to the league that he was an MVP-candidate.

This earned him a second-place finish in the MVP voting, coming in behind Bonds.

Him and Bonds found their names in the MVP conversation again in 1991, as they finished second and third in the voting.

However, that would be his last year in Pittsburgh as Bonilla hit the free agent market that winter.

The Mets made a big splash in signing him to a 5-year, $29 million contract.

This made him the highest-paid player in team sports history, surpassing the New York Knicks’ Patrick Ewing contract signed earlier that offseason.

At first, it seemed like the contract impacted his play.

In his first seasons, Bonilla saw his average drop to .249 as he hit just 19 home runs.

He improved the next season, returning to an All-Star level with 34 home runs.

Arguably his best season came in 1995, as he hit .329 with 28 home runs between the Mets and Baltimore Orioles where he was traded during the season.

Bonilla then bounced around between different teams throughout the rest of his career, remaining productive but not quite reaching the same levels.

He did win a World Series with the Florida Marlins in 1997, where he hit a big home run in Game 7.

Bobby Bonilla pimped this bomb in Game 7 of the 1997 World Series! 😳 pic.twitter.com/SErBWRRc0K

Today, Bonilla is most known for the $1.2 million payday he receives every July 1 from the Mets.

This was a result from when the Mets bought out the remaining $5.9 million on his contract in their 2000 trade with the Orioles.

Instead of paying him out then, the Mets decided to give Bonilla annual payments of $1.2 million from 2011-2035.

As a result, July 1 feels like a type of holiday in the baseball community; it’s Bobby Bonilla Day.

It is also what Bonilla is most known for among younger fans.

The Mets’ new owner, Steve Cohen, has also suggested having an annual celebration for the day.

Where is Bonilla Today?

Besides having a special payday, Bonilla largely remains out of the limelight.

Little is known about his life today, especially as much of his coverage is dominated by his contract.

Despite this, Bonilla remains as one of the better hitters of the 1980s and 1990s.

He was a mix of power and average just before the steroid-age, playing alongside and almost matching a young Barry Bonds.

Regardless of what he did on the field, the Bonilla name will certainly be remembered by fans every July 1.

The Pirates Have A Serious Star On Defense

There May Be Hope For The Pirates In 2023

Pirates Continue To Be Greedy For Bryan Reynolds

Andrew McCutchen Has A Summer Of Milestones Ahead

Andrew McCutchen Will Enjoy A Special Homecoming In 2023

Pirates Make Another Hype Video For A Minor Addition

NHL Team Honors The Pirates In A Perfect Way

Pirates Attempt To Hype Up A Minor Offseason Signing

The Pirates Are Celebrating A Feat Thanks To Another Awful Season

Oneil Cruz Is Flashing His Power In Another League