You are here: Home / Cold Hard Facts / What Are the Names Of The Seven Dwarfs? (Explained) 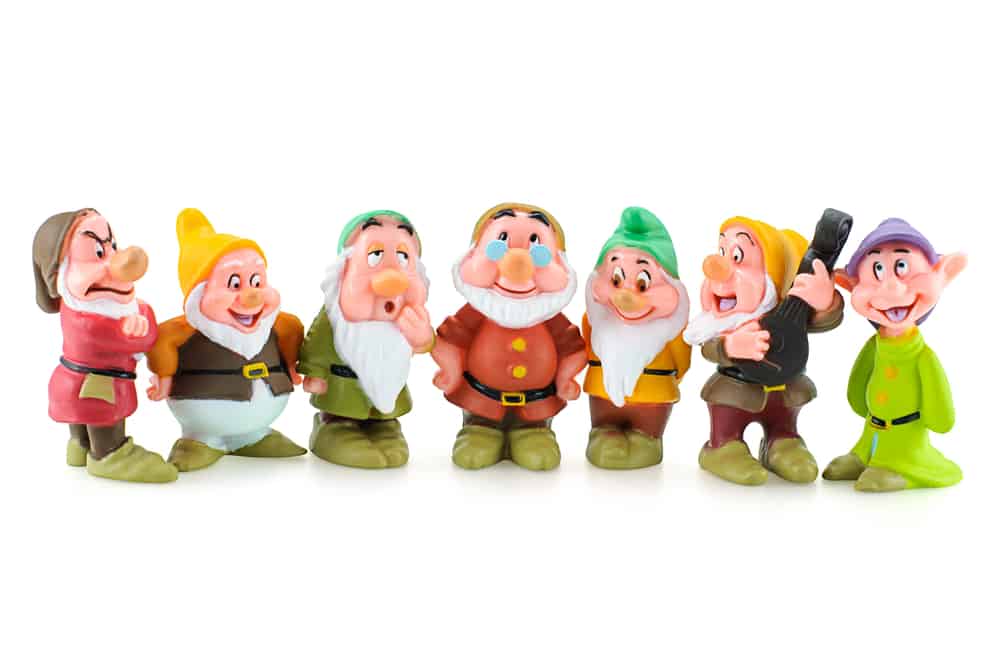 Created in 1937, Snow White and the Seven Dwarfs is a classic Disney movie that has been making people happy for more than eight decades.

The dwarfs in Snow White are often referred to and referenced when talking about different types of people.

There is a dwarf that almost everyone can relate to at some point in their lives.

As an adult, when you go back and watch the film and look at the Seven Dwarfs and all they represent, this becomes an even more enjoyable movie.

One of the most asked trivia questions about Disney movies is about the names of the seven dwarfs.

If you are curious as to what the dwarfs’ names are and what you should know about their character, then we have all the info you need.

Here are the names of the Seven Dwarfs and their personalities explained.

What Are The Names Of The Seven Dwarfs? 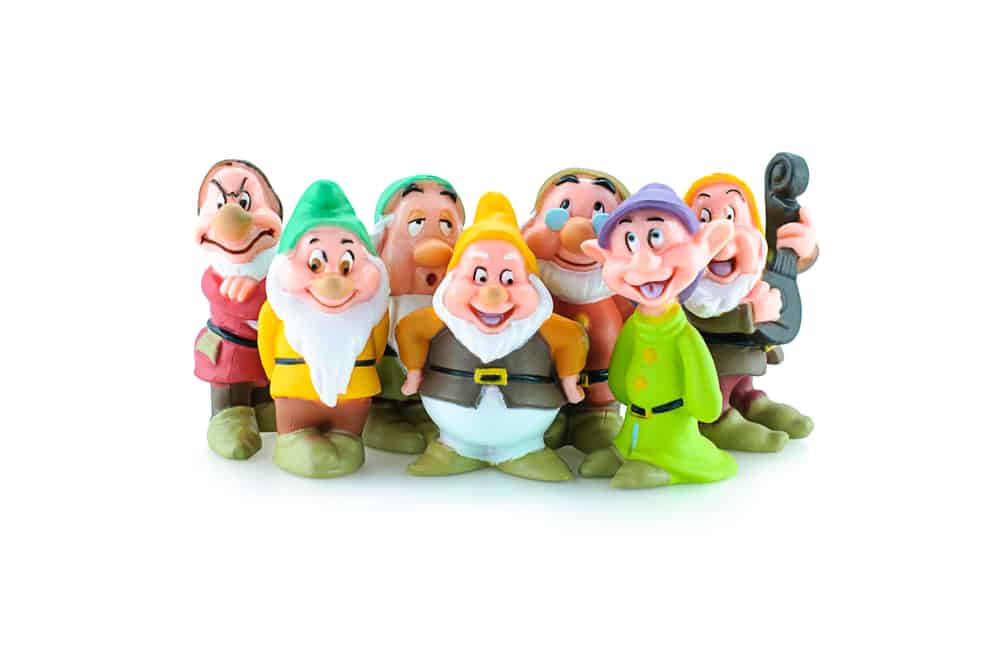 As you can imagine, these dwarfs represent a wide range of personalities, and they bring quite a bit of storyline to the movie, Snow White and the Seven Dwarfs.

In fact, most people would say that the movie would be completely different and relatively uneventful if her friends, the dwarfs, were not there to support and be with her.

The names of the seven dwarfs are not all that you need to know about these guys.

The personalities are what really make these characters so great.

Let’s look at each of these characters and what you need to know about them.

Dopey is perhaps the dwarf that almost everyone can say they like.

There is just something about Dopey and the way he looks and acts that make him stand out from the crowd.

Dopey is very easy to recognize as he wears a green outfit and a purple hat.

His outfit looks a bit big on him, and it is kind of droopy.

He is also the only dwarf that does not have white hair.

There is something about his sweet face and the way that he loves everyone and everything that makes it hard not to fall in love with Dopey.

In fact, the first time you watch this movie, he will be the dwarf that you have the easiest time remembering and latching on to.

Doc is the leader of the seven dwarfs.

He is typically considered the smartest and wisest of all of the dwarfs, and part of that is simply the way that he looks.

Doc is a smart looking dwarf with glasses, a yellow hat, and an orange/brown shirt.

The thing that you will quickly learn about Doc is that he is often dealing with Grumpy and his personality.

Doc wants things done his way, and he does not want to have to deal with issues that are brought up by the other personalities in the group.

We can all relate to this at some point in our lives.

If you were one of seven dwarfs, you could imagine there would be quite a few issues that come up along the way.

One thing that you will notice about Doc is that, even though he is the leader of the group and tends to tell everyone what will happen and when, he is still a bit flustered.

This makes Doc a little less than perfect and even more likable.

Without a doubt, Bashful will live up to his name as being quite shy.

In addition, Bashful is also very self conscious.

You will notice that he gets embarrassed rather quickly, and for almost no reason at all.

Something about Bashful’s embarrassment for just being himself makes him even more endearing as a character.

Overall, people think that Bashful is also very cute, and so does Snow White.

He is often found to be blushing and hiding his face under his beard.

Bashful thinks that Snow White is quite special, and you can tell that he loves her throughout the movie.

Of course, Snow White only has an interest in one man, and it is certainly not one of the Seven Dwarfs.

Overall, Bashful is a great character, and his sweetness makes the movie that much better.

Do you have a friend with allergies who just can’t help but sneeze?

These people always tend to sneeze at the wrong time.

Whether it be while driving, in church, while a baby is sleeping, sneezing can be the most annoying habit, and some have no way to control it.

Sneezy is one of these people.

Sneezy almost never gets a break from his sneezing.

He keeps sneezing throughout the entire movie, so much so that all the other dwarfs are completely used to the fact that sneezy is a constant sneezer.

It doesn’t seem as though Sneezy is sick in the movie, but he just happens to have a stuffy nose and some allergies.

The sneezing will be funny to watch, and honestly, sometimes you just want to get this guy some allergy medication while you are watching the movie.

Although people like Sneezy, he’s not typically one of the most favored characters.

It’s hard to like a guy that just keeps sneezing constantly!

Happy is the most cheerful of the seven dwarfs, although we have to say that several of these dwarfs have an overall optimistic attitude.

Happy is the kind of person that you will want to be.

He has an excellent outlook on life, and his overall demeanor makes him so easy to like.

Happy is the most fun to be around and has some tremendous overall character traits.

You can tell that Happy loves food, people, parties, and Snow White.

If you had the chance to spend time with any of the seven dwarfs, Happy would be the one that you would probably want to spend the afternoon with.

No matter what activities you suggested, Happy would probably agree that they were a great choice and plenty of fun to partake in.

If you are having a bad day, try and be a bit more like Happy, and your day may just turn around.

We all know that person who will not cheer up no matter what goes their way.

Grumpy is that guy who just loves to be miserable.

Although everyone has a bad day from time to time, Grumpy chooses to be pretty miserable at all times.

Grumpy has a brown hat and a red shirt, but you will quickly tell which one he is.

The face of Grumpy looks very cross, and he is almost always standing with his arms crossed and looking annoyed.

We all know people like this in our lives who just can’t turn their lives around and become more like Happy.

The thing about Grumpy is that you can tell he is not a bad dwarf.

There are glimpses of his true personality coming out in the movie where you realize that Grumpy is not mean, simply a little annoyed and over his life at times.

Although Grumpy has the least attractive personality of all the seven dwarfs, you can see that none of the dwarfs is considered to be bad or have a nasty demeanor to them.

Last but certainly not least is Sleepy.

If you have a newborn child, you may feel a little like Sleepy trying to get through your day.

It is very easy to pick Sleepy out of the crowd because he looks incredibly tired.

You will notice that he has one eye that is larger than the other, making it look as though he is always about to fall asleep.

Chances are Sleepy is not actually going to fall asleep, but this is what he looks like in every scene of the movie.

One interesting fact about the person who played the voice of Sleepy is that he also did the voice for Grumpy.

Maybe this says something about why we all feel so grumpy if we do not get enough sleep.

When you look at Sleepy, you will want to curl up and take a nap.

Which Of The Seven Dwarfs Is The Most Well Liked? 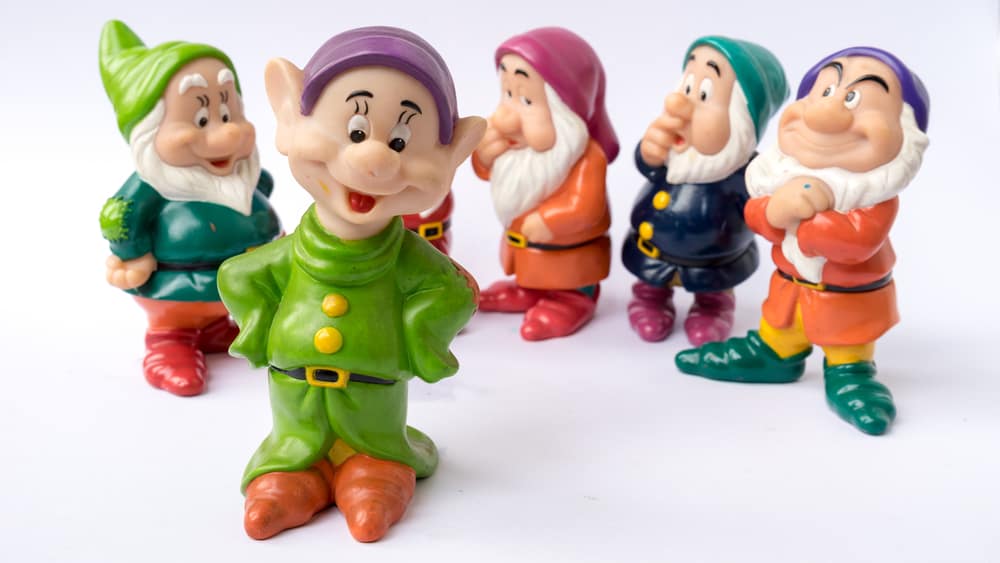 The seven dwarfs have quite a bit of personality, and the fact that each of them is so unique really is what makes the movie such a special one in the Disney lineup.

People like to align themselves to one of the dwarfs and talk about how they are just like this person.

Although there are many other personality traits and character types out there, the seven dwarfs cover quite a broad range.

The great thing for kids and families is that these characters allowed everyone to see the differences in the dwarfs and how that can relate to differences in people.

The favorite of the seven dwarfs tends to be Dopey.

Dopey has such a friendly and endearing personality that he simply is hard not to love.

If you are a fan of the way Dopey acts, chances are you have a large heart and care about people that understand and appreciate the simple things in life.

Dopey is one of those characters that can understand how important a good day is.

When comparing his personality to Grumpy, who finds negative in things, Dopey would be more likely to find the positive.

Even comparing Dopey to Doc allows you to see how Doc gets easily overwhelmed and wrapped up in situations where Dopey can all let it go.

Perhaps the thing that helps us feel most connected to Dopey is his simplicity and sweetness.

Overall, you will likely find that the dwarfs you like the most will change as you go through different stages in your life.

At certain times, you may find that you are more like Doc or Bashful, but in the end, Dopey and Happy are likely the two you will want to be most like.

Now that you are an expert in the seven dwarfs, you need to try and win some Disney trivia events.

These characters have been making people smile for many years, and it likely will continue for years to come.

People tend to love the seven dwarfs and all that they represent.

This is a movie that you will probably pass down to your kids and then quiz them about the names of the seven dwarfs at some point.

If you need to relax, have fun, and unwind, watching some sense of the seven dwarfs and their reactions is quite entertaining and enjoyable.

What Are the Names Of The Seven Dwarfs? (Explained)