You are here: Home / Sports / Urban Meyer Reacts To The Loss Of Dwayne Haskins 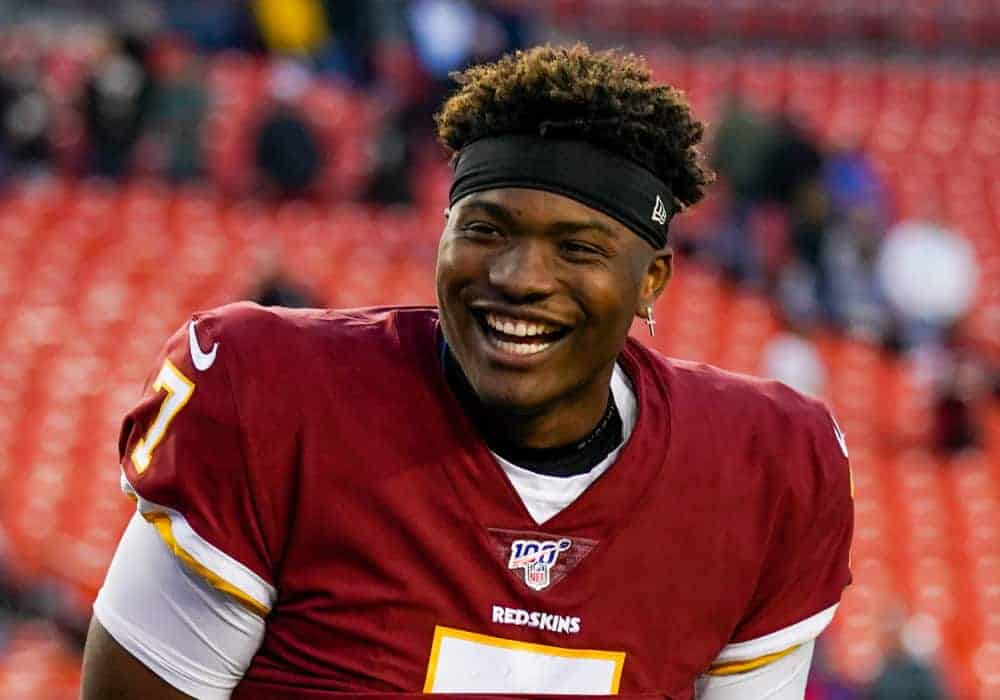 As the NCAA and NFL worlds continue to process the shocking news of Dwayne Haskins‘ death, tributes continue to pour in for Haskins.

Long before he reached the NFL, Haskins had a love affair with Ohio State University.

On Saturday, video footage of his first visit to Ohio State was unearthed.

An 11 year old Haskins declared “he was going to college here”.

Dwayne Haskins wanted to be a Buckeye from the jump. Ended up building a legacy there:

So it is only fitting that his Ohio State coach Urban Meyer published a poignant tribute to Haskins.

Posting a picture of Haskins having a tender moment with a baby in what appears to be Ohio Stadium, Meyer wrote:

“Heartbroken to hear of the loss of Dwayne Haskins Jr. My thoughts and prayers go out to his incredible family. One of the greatest QB’s in Ohio State history, but an even better son, teammate, and friend. God Bless!!”

Heartbroken to hear of the loss of Dwayne Haskins Jr. My thoughts and prayers go out to his incredible family. One of the greatest QB’s in Ohio State history, but an even better son, teammate, and friend. God Bless!! pic.twitter.com/lM9Z8LzMhe

Meyer voices the sentiments of Ohio State fans who gathered at Ohio Stadium to pay their respects and mourn Haskins.

An Ohio State fan came to Ohio Stadium to pay his respects to Dwayne Haskins just now, leaving behind an Ohio State mini-helmet and a headband. Two jerseys were already hung from the gates and flowers were placed in his memory. pic.twitter.com/MW5OHR13mQ

As Meyer said, he was one of the greatest Ohio State quarterbacks ever, but others are remembering him for his big smile and warm personality.

His smile and warmth emanate from the photo.

Heartbreaking for Dwayne and his family. This is him with Kyler back in Washington. Heavy heart today. Prayers for his family. pic.twitter.com/vBUgezVjt3

New teammate Mitchell Trubisky, who was in Florida with Haskins and other Steelers players training at the time of the accident, also referenced Haskins’ “big heart and infectious smile”.

Mitch Trubisky: "I am absolutely heartbroken, Dwayne has made such an impact on me in a short period of time. He welcomed me to his team with his big heart and infectious smile. I am so thankful to have known Dwayne. All my love and prayers are with his family." 🙏♥️ #Steelers

It will take far longer than a day to digest this tragedy.

We cannot imagine what Haskins’ wife and family members are going through.

It is sad that we were not privy to these pictures and stories while Haskins was alive, but they do honor his memory in a lovely and bittersweet way.

What Happened To Stetson Bennett?

Matthew Stafford Will Be Shocked By A Pro Bowl Fact

An NFC Championship Blowout Did Not Hurt TV Ratings

Urban Meyer Reacts To The Loss Of Dwayne Haskins