You are here: Home / World News / Siegfried Fischbacher Of Siegfried And Roy Dies At 81 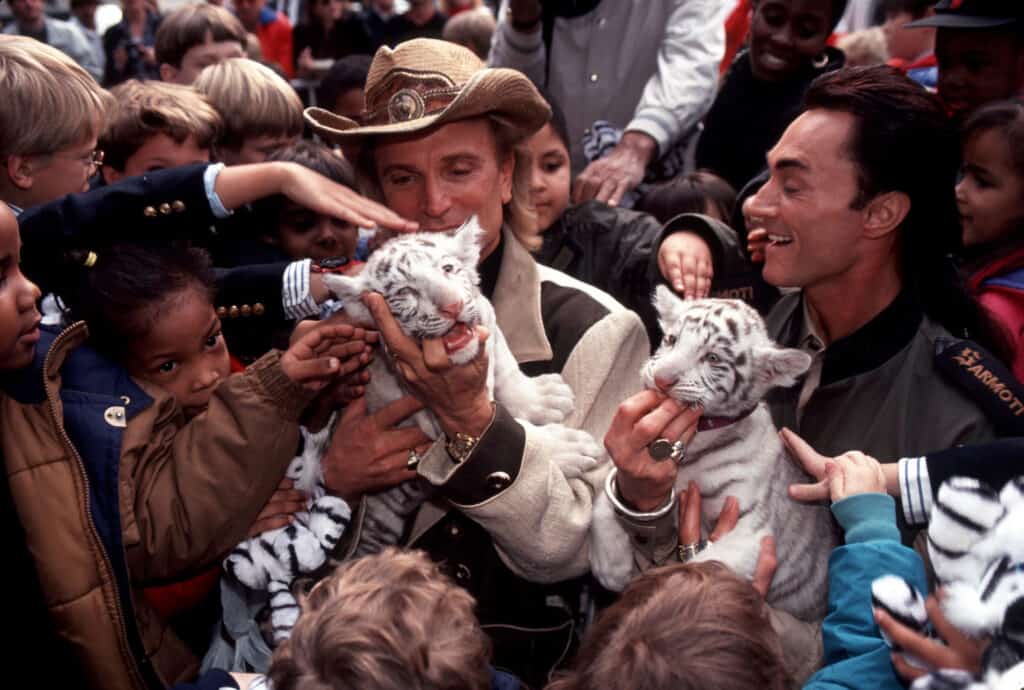 Siegfried Fischbacher who partnered with Roy Horn to create the famed Siegfried and Roy show in Las Vegas, Nevada has died.

It had been recently announced that he was suffering from the late stages of pancreatic cancer.

He reportedly had undergone a 12 hour operation in early January to remove a tumor but returned home to be in hospice care.

Siegfried died on Wednesday, January 13, 2021 in a Las Vegas hospital.

#BREAKING World-famous magician Siegfried Fischbacher, part of the duo Siegfried & Roy has died. His death comes two days after announcing that he was suffering from terminal pancreatic cancer.

His partner Roy Horn died 8 months ago of Covid-19. pic.twitter.com/TJhO9lzCZB

Siegfried was born in Germany; his living blood relative is a nun based in Munich named Dolore.

Dolore prayed over and with him via telephone up to the point of his death.

She said the prayers gave him the courage to let go.

Fischbacher died less than one year after Roy Horn succumbed to COVID-19 in May 2020.

The performers and friends were linked for a half century.

When Horn died, Siegfried said this:

“Today, the world has lost one of the greats of magic, but I have lost my best friend. From the moment we met, I knew Roy and I, together, would change the world. There could be no Siegfried without Roy, and no Roy without Siegfried.”

Horn was a waiter, and Fischbacher was a steward.

Fischbacher was fascinated with magic as a child and eventually convinced Horn that they should create an act combining animals and magic.

They toured Europe in the 60s before landing in Las Vegas in 1967.

By 1981, they were headlining their own show at the New Frontier Hotel and Casino.

The duo performed about 5,000 shows for an estimated 10 million fans during their residency at the Mirage.

“[Siegfried and Roy] put Las Vegas on the map not only as spectacular illusionists but also as breeders, trainers and caretakers of royal felines which grew to be an enormous part of their performance…Siegfried was the kindest and most loyal friend and a beautiful individual. What is calming now is to realize is that he is back with his life partner, Roy Horn, and at peace. You are loved, dear Siegfried.”

The passing of Siegfried Fischbacher marks the end of an era. Siegfried & Roy had a vision for the kind of entertainment spectacular the world at large had never before seen. We are grateful for all they meant to MGM Resorts, Las Vegas and to the world of entertainment. pic.twitter.com/9Yx6TDVfyl

During a live show, Horn was attacked and mauled by the 400-pound Siberian tiger named Montecore.

Horn endured multiple surgeries but was never the same; he suffered partial paralysis as a result of the accident.

A 2005 USDA report cited the irreparable damage was the result of a crushed windpipe and damage to the artery carrying oxygen to the brain.

A private funeral service is planned for Siegfried with plans for a public memorial to be held in the future.

Siegfried Fischbacher Of Siegfried And Roy Dies At 81