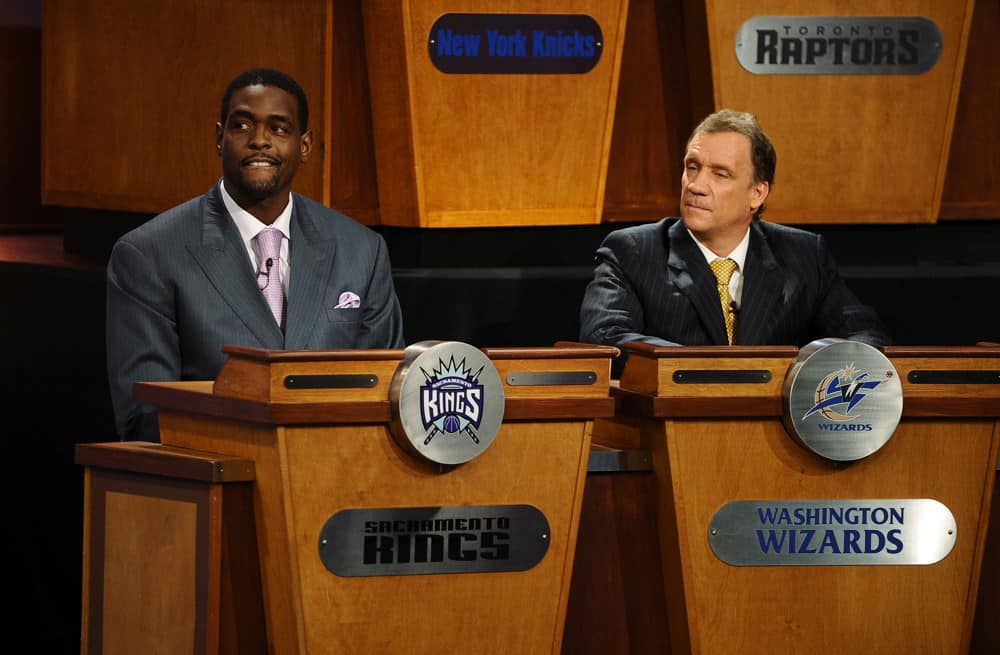 Everything is based on pre-draft analysis, college tape, and combine numbers.

These days, the label “bust” is thrown around seemingly at will, without ever giving players a chance.

That’s why it’s vital to give players time before accurately assessing their draft position.

Now three years removed from the 2017 NBA draft, we can more accurately rate the draft class.

Most players have at least 200 games under their belt – plenty of tape to get a feel for who they are as a player.

And with more accurate reads on players, it is always fun to go back and do a “re-draft”.

Try to guess what teams would do differently if given the chance.

For this article, we will be re-drafting the top 5 selections.

The 2017 draft is certainly one the Sixers wish they could get a second crack at.

Originally scheduled to pick 3rd, they traded with Boston to move up to the top slot.

Fultz, in theory, was perfect for what Philly needed at the time.

A scoring guard who could play next to Ben Simmons and create his own shot when needed.

But what unfolded was one of the weirdest occurrences in Philly sports history.

Markelle Fultz has been diagnosed with Neurogenic Thoracic Outlet Syndrome, which affects the nerves between the shoulder and neck and is treatable, per @wojespn pic.twitter.com/EdkdmSAblQ

It would be a toss-up between Tatum and Mitchell, but Tatum gets the nod because of his higher ceiling.

Slotting Jayson next to Simmons and Joel Embiid would be a scary sight for opponents.

Tatum has proven himself to be a talented isolation scoring threat, exactly what Philly has been missing in years past.

He is averaging a career-best 25 PPG this season while hitting 38% of his nearly 8.0 3PA per game.

The current Celtic has also bettered himself as a distributor with the ball in his hands.

Dope skip pass from Jayson Tatum to create the open 3 vs. the zone pic.twitter.com/sELreUQbtJ

Giving Philly a second option to initiate the offense besides Simmons.

A Big 3 of Simmons, Tatum, and Embiid would be primed to dominate the East for years to come.

This is a tough selection to re-draft.

While Ball is not as talented a player as Mitchell, Lonzo was still part of the package LA sent to New Orleans to acquire Anthony Davis.

So by that logic, this selection is more or less unconsequential.

But that’s too boring for this exercise, so we can imagine Mitchell sticks around with LeBron James and AD.

What a group that would be for Los Angeles.

Mitchell is an explosive scoring guard who is capable of going off for 40 points any given night.

He’s averaging a career-best 26 PPG this season while knocking down 39% of his triples.

Oh no big deal, Donovan Mitchell is just averaging 30.1 points in 32.1 minutes over the last 12 games. Nearly a point per minute on literal 50-40-90 shooting splits, that's all. pic.twitter.com/htYNwsfcav

Mitchell is a bit of a volume scorer, as he only shoots 44% from the field for his career.

But playing alongside the King and the Brow could lead to him becoming more efficient.

James’ playmaking and court vision would lead to a ton of open looks for Mitchell.

In return, Mitchell’s scoring ability could take some of the offensive burden off LeBron’s back.

LeBron and AD are a seamless pairing on the court.

Slotting in Mitchell would only add firepower to the Laker’s attack.

With their original selection taken in this re-draft, Boston is forced to turn elsewhere.

And given they still have a talented scoring wing in Jaylen Brown and point guard in Kemba Walker, they pass on Kyle Kuzma and De’Aaron Fox.

Instead, they opt for Bam Adebayo to help shore up what has been a shaky frontcourt for the Celtics.

While Fox would definitely be tempting, it would be hard to pass on Adebayo.

The Celtics’ frontcourt has been a glaring weakness since Al Horford left.

Bam immediately fills that gap and then some.

The 6’9″ center/forward has blossomed into a true two-way star.

His size, athleticism, and relentless motor have made him an All-Defensive team member and 19 PPG scorer.

After a bit of a coming-out party last season, Bam has continued to grow his game.

His +3.4 estimated plus/minus ranks in the 95th percentile, good for 7th among centers.

Adebayo is a clean fit on nearly any roster and would form a menacing defensive tandem with Marcus Smart.

Missing out on Tatum would hurt, but Adebayo is a nice consolation prize.

Similar to Philly, this is a selection the Suns surely wish they could get back.

Josh Jackson never panned out in Phoenix, failing to live up to his label of a two-way wing.

Instead, the Suns go with John Collins.

This is another toss-up selection as both Collins and De’Aaron Fox would be solid choices here.

But with Chris Paul currently playing terrific basketball as a “point god”, they roll with the human pogo-stick out of Wake Forrest.

Phoenix already has a solid trio with Paul, Devin Booker, and Deandre Ayton.

Mikal Bridges has filled in as a 3-and-D wing nicely.

Jae Crowder and Cameron Johnson have been solid role players at the PF position, but Collins gives them some more pop.

He would be an excellent pick-and-roll partner and lob target for both CP3 and Booker.

Collins also wouldn’t crowd the offense next to Ayton given he is a 37% shooter from deep on more than 2 attempts-per-game.

He’s a work in progress on defense, but his offensive ability would pair perfectly with the Suns’ current Big 3.

Even in a re-draft, the Kings hold true to their original selection.

Fox has the talent and potential to go higher but falls back into the Kings’ lap at 5.

Something Sacramento would be very happy about.

Unlike the first four teams in this draft, the Kings are still a lottery team.

While they have a top-10 offense, they also possess the league’s worst defensive rating.

Because of this, the Kings should still be drafting based on talent alone.

The promising play of rookie PG Tyrese Haliburton should not sway them into looking at Kuzma, Lauri Markkanen, or Jarrett Allen.

Fox is one of the fastest players in the league and an absolute blur with the ball in his hands.

He’s averaging nearly 25 PPG this season as well as 7.1 APG.

There is still work to be done on his three-point stroke, but the form is there and should come along with time.

Fox is electric in the open court and can break down defenses single-handedly.

Pairing him next to Haliburton gives Sacramento their backcourt of the future who can grow together.

1 NBA Player That Is Quietly Having A Great Season

One NBA Team Is Consistently Leading The West

2 NBA Teams That Had A Bad November

The Usual Suspects Are Currently Leading The NBA

The Celtics Are Scoring More Than They Have In Decades

The Celtics Stay Committed To A Beloved Big Man

The Clippers Are Hanging On Despite A Lack Of Leonard

2 NBA Players That Need To Be Traded At The Deadline

Is Steph Curry On His Way To Another MVP This Season?

Luka Doncic Is Leaving The Rest Of The League Behind

Re-Drafting The Top 5 Players In The 2017 NBA Draft