You are here: Home / The Cold Spotlight / Phone Only Charges When Off (Causes, Fixes) 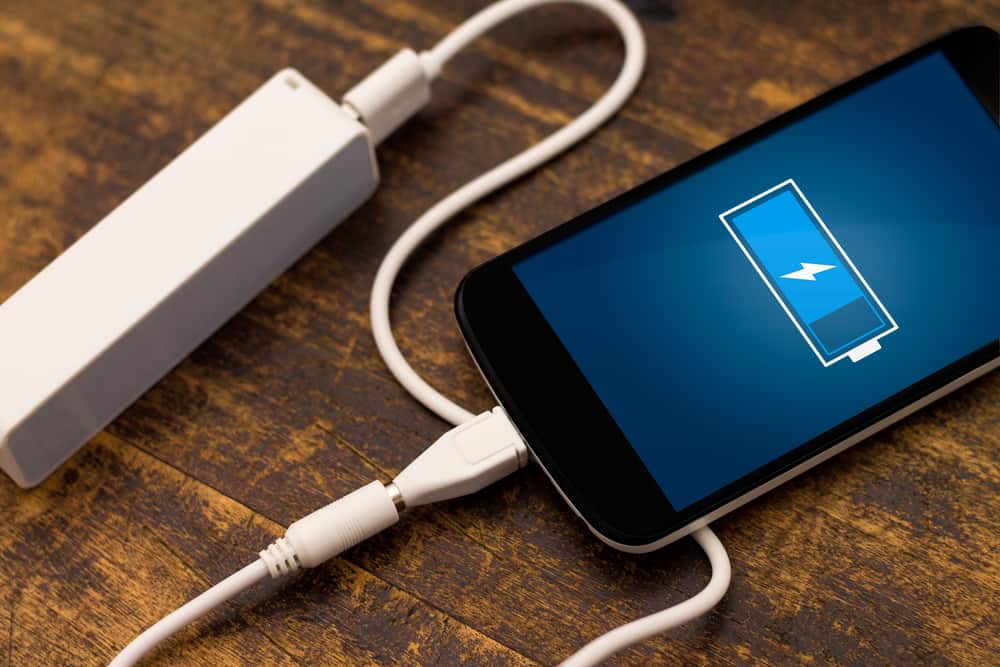 Finding out your phone isn’t charging all of a sudden is one of the scariest and most frustrating issues that can happen to anyone.

Sometimes, it’ll only charge when you turn it off completely, and sometimes it won’t charge at all.

You’ll be relieved to know that the issue could be something small like the charging cable or power source.

Unfortunately, there could also be a more serious issue with the software or the hardware, including the battery or motherboard of your phone, but they’re usually fixable.

Read on and go through the possible culprits and their fixes, one at a time, to troubleshoot your phone and hopefully solve the issue.

Why Is Your Phone Only Charging When Switched Off And How Can You Fix It? 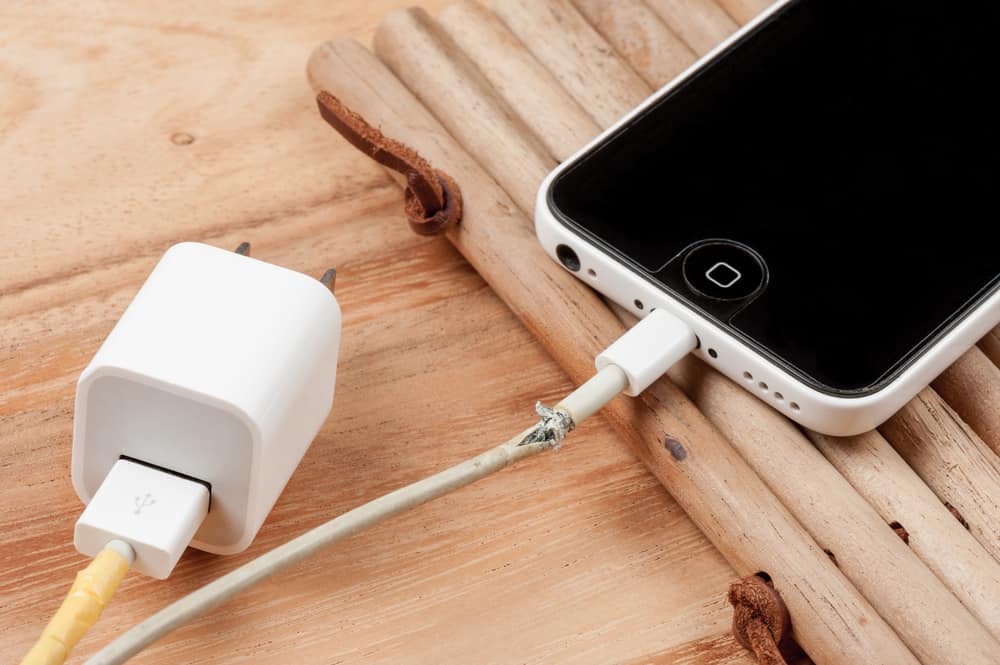 Before we start blaming your phone for the issue, let’s consider a simpler culprit.

A damaged or incompatible charging USB cable or charging brick can cause your phone not to charge when turned on because they’re not rated for the proper power delivery, and they’ll charge it at a very slow rate with poor quality.

Even when your phone is off, they won’t manage to charge it normally, damaging the phone’s battery in the long run.

The charger would be a candidate for replacement if it didn’t come with your phone or from a trusted brand.

Look for any red flags like rips, cuts, bends, or general damages to the cable or cracks and bent outlets on the brick.

Then, use a combination of different cables and plugs, including the ones you use for your phone with another device, and see if they can function well.

You can also use cables that you know for sure work with your phone.

If you determine that the cable and brick are fine, move on to the next section. 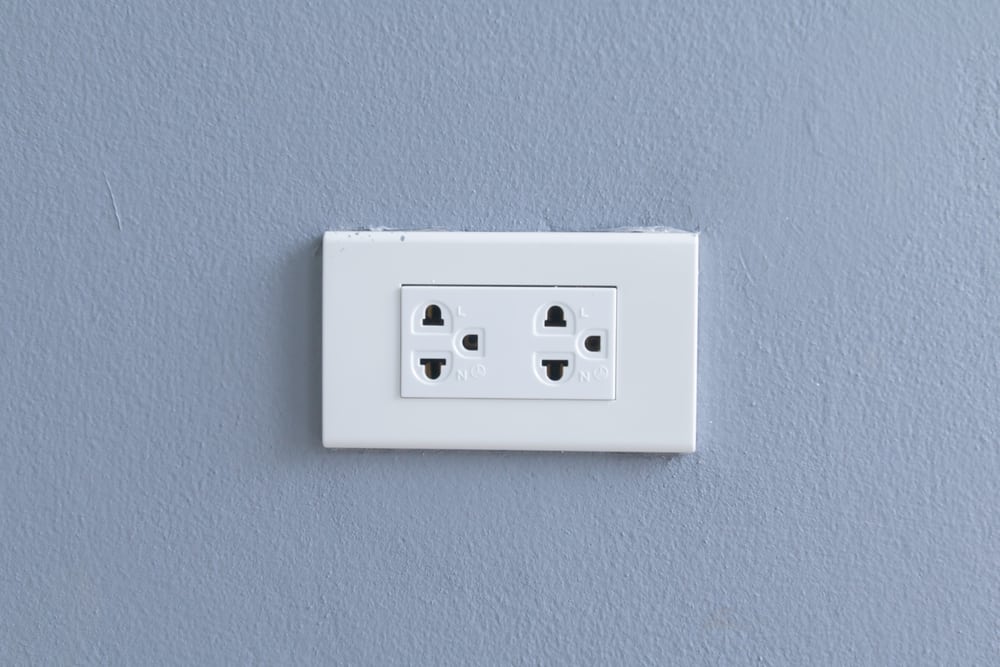 Sometimes, the problem could be with the power source you’re using for charging your phone.

If you’re using a wall socket, try plugging another device into the outlet and see if it works well.

Outlets can go bad occasionally, or a section of your house or office could be having electrical issues.

If you’ve plugged your phone into a power strip, connect it directly to the wall instead because the power strip’s ports might be dying.

Using another device for charging your phone, like a laptop or USB hub, could be causing the issue because they may not provide the juice your phone needs to charge appropriately.

Try a wall outlet instead. 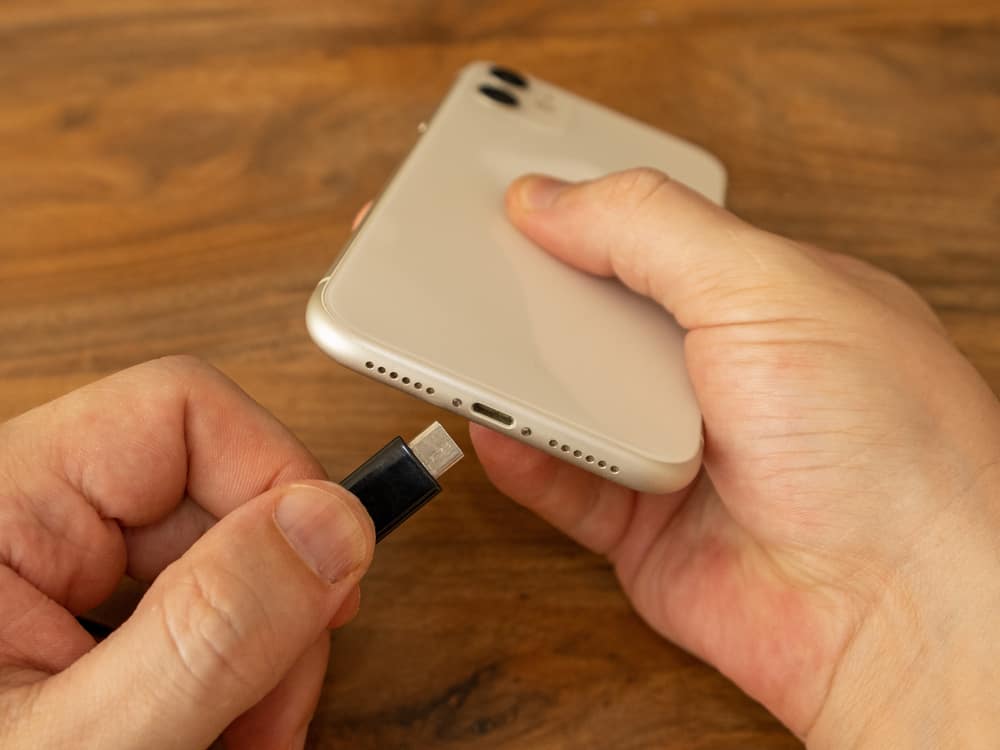 As you must know, your phone’s charging port acts as a connector between the charging cable and the phone itself.

If the port is damaged, it won’t do its job well, causing charging issues.

A malfunction could happen if the port is clogged with dust or debris, rusty, wet, damaged, or loose.

Go through the following solutions to fix the issue:

Inspect your phone’s port with a flashlight and check for dirt or outside objects covering the metal charging contacts.

Dust and debris can stop the contacts from connecting with the AC power flow correctly, causing a short that prevents the phone from charging.

When the phone is off, there’s no electricity present in it to cause a short, so your phone will start charging again.

First, try to blow into the port to remove any dust.

You can also use compressed air.

Then, get a clean and dry toothbrush to gently clean out the inside of the port.

If needed, you can do heavier cleaning with a dry cotton swab and a toothpick.

Just don’t go ramming anything too far into the outlet.

Make Sure The Port Is Dry

As a security measure, modern phones won’t allow charging if they detect any water or moisture in the USB port to protect the device against corrosion.

If your phone has experienced water damage, you shouldn’t even try to charge it for at least 24 hours before it dries.

Turn off your device while the water evaporates, and it dries out.

You can also try blowing cool, dry air into your phone’s port or dumping it in a bowl of rice as a classic solution.

Straighten Out The Pin

Some phones have a small metal pin or flap inside their charging ports.

These can bend if you’re not careful, causing your phone to have issues with charging.

You’ll need a thin flathead screwdriver or a needle to straighten it if that applies to you.

Turn off your phone and wait around 20 seconds.

Then, insert the screwdriver and push the pin just a smidge.

Don’t bend it the wrong way or go too far.

Turn the phone back on and see if the issue is resolved.

Your phone’s USB port can get loose over time due to excessive usage.

That is especially the case if you find your phone charging only at certain angles.

Unfortunately, there’s not much you can do about this other than having a reliable technician replace the port. 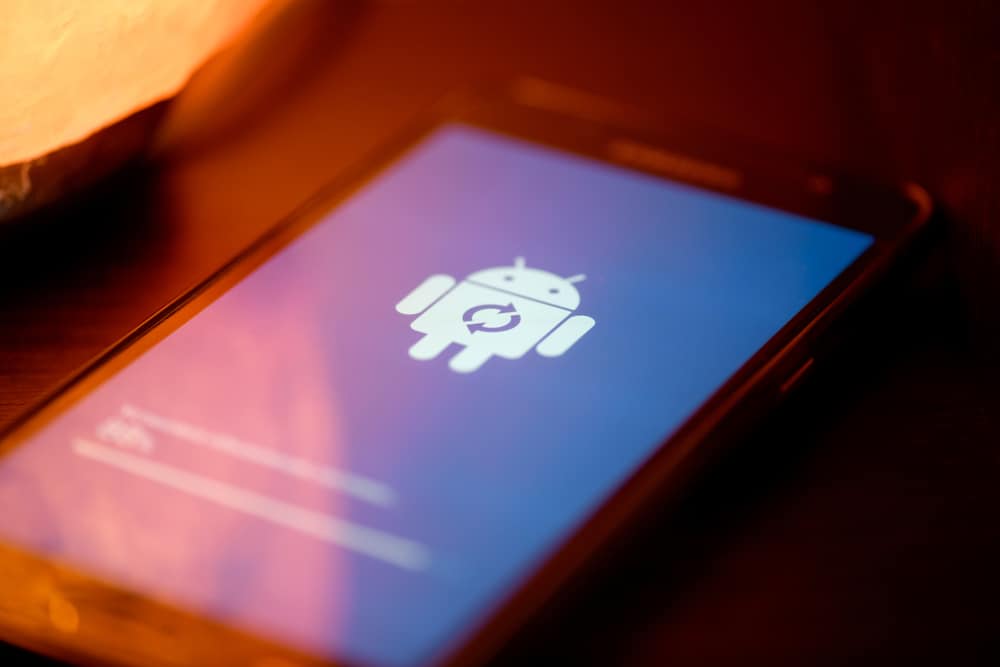 Software glitches or bugs can cause your phone not to charge when active because they can affect the charging process only when your phone is turned on.

To solve this issue, go through the following solutions one by one:

If your device is outdated, its drivers will start to malfunction, causing charging issues.

If you haven’t set your phone to download and install updates automatically, search for an update.

For an iPhone, go to Settings, tap on General, and then System Updates.

If there are any available updates, download and install them to solve the issue.

Roll Back Your Software

If the charging issue started after you installed a new update on your phone, a bug might be causing the problem.

You can try rolling back your system to the previous version if its manufacturer allows such actions.

Also, if you’re installing new updates on your old phone, it can struggle in many ways, including with its battery life.

If you can’t troubleshoot the issue, consider rolling back your phone.

Always back up your data before rolling back the system to an earlier version.

Check If Power-Intensive Apps Are Running

If you’re running multiple power-intensive apps simultaneously, such as high-graphic games, cameras, videos, and so on, you might have to cut down on usage.

Your phone is probably having difficulty charging the battery while the charging current goes straight to power your running tasks instead of the battery.

Moreover, when the phone is under pressure, it’ll start to overheat.

As a result of overheating protection design, it’ll automatically decrease the charging current, causing you to think your device isn’t charging correctly.

Sometimes a simple restart is all your phone needs to solve its issues, especially if it’s just a temporary glitch.

Push the phone’s power button for a few seconds and then tap the restart option that appears on the screen.

Wait a minute before restarting your phone, and plug in the charger to see if the problem is over.

Start Your Phone In Safe Mode

Safe mode is a sandbox environment that only allows your phone to run the software it originally had.

That means any third-party apps that you’ve installed will be restricted by safe mode.

That will help identify the issue that’s causing the charging issue.

Different phones have different ways of entering the safe mode.

Here we’ll explain how you can do it for iPhone and Samsung smartphones, but if you have a different brand, search the internet for the process before proceeding.

If there’s no issue and your phone charges normally, then a third-party app is causing the problem.

Uninstall any apps that you’ve downloaded recently and those that you don’t trust.

Restart your device and see if the issue is resolved.

Sometimes, a soft reset will resolve the issue that minor glitches cause.

The key combinations for performing the reset may differ for some smartphones, but it’s usually holding down the power and volume down keys for up to 45 seconds until your device restarts.

Performing a factory reset or hard reset is your last resort for solving software issues before starting to blame the hardware for the charging problem.

It’ll restore the phone to the default condition it came in when you first bought it, erasing all your data and downloaded apps.

Perform a backup using your phone’s backup feature, and also save all your data, including the photos, videos, and files, before proceeding.

To perform a factory reset, you’ll have to search for the process for your exact phone model because even different iPhone models have slightly different steps.

Try charging your phone in its factory default condition.

If it works, restore your phone using the backup you’ve made and see if it still charges normally.

If the factory reset doesn’t help with the issue, you have a hardware problem. 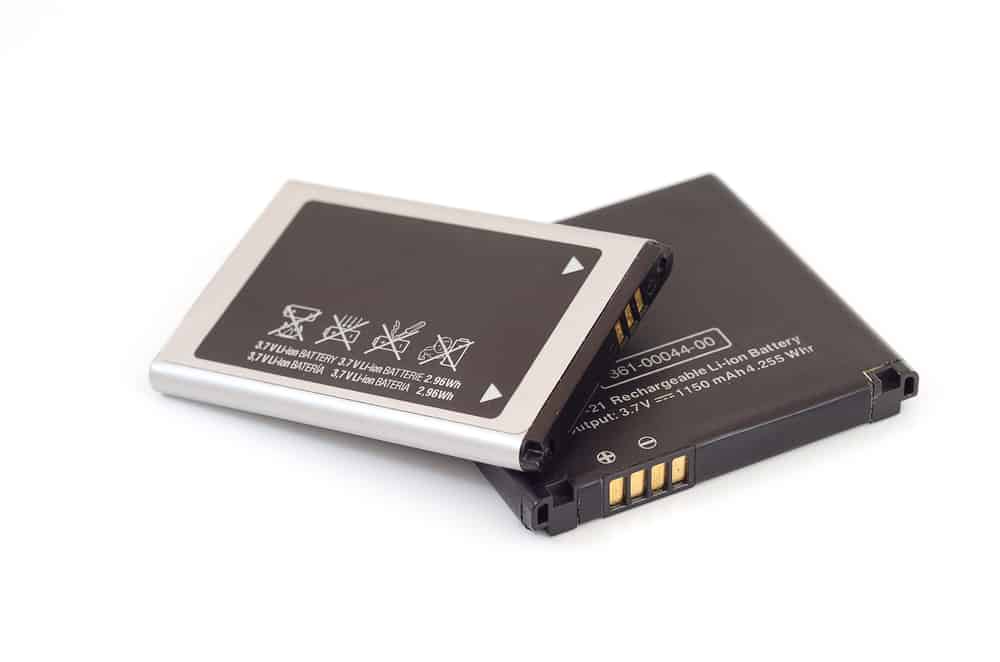 Unfortunately, charging issues can all be traced back to the phone’s battery.

If the charger, charging port, and software are fine, you need to suspect the battery has become weak after various recharge cycles.

It might be repelling the current, causing it to go to your phone directly as you use it.

Therefore, your phone only charges when switched off or not at all.

Other signs are telling you that your battery is at the end of its life, including the following:

To make sure your battery is problematic, you can download and install the Ampere app on your phone.

It’ll tell you if your battery is in good condition, how much current your phone is discharging or charging with, the available voltage, and the current temperature.

If you still own one of the rare smartphones with removable batteries, some tricks can help solve the issue.

Try removing the battery, waiting a while for it to cool down, and putting it back in.

If this doesn’t work, get a new battery and replace it yourself.

However, if you have modern phones, you shouldn’t go touching your phone’s battery. 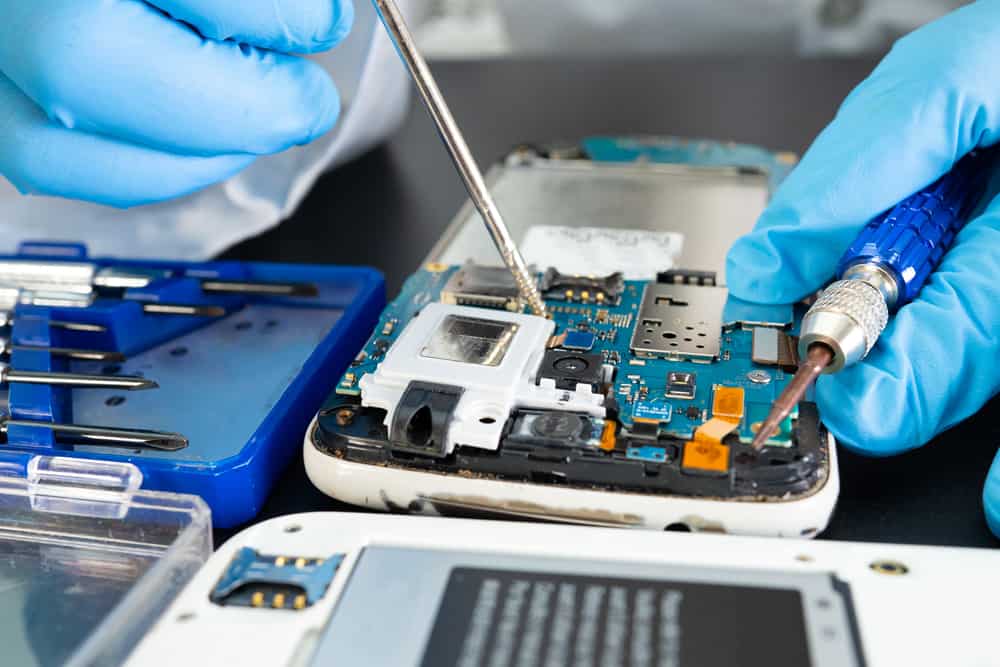 If it’s not the battery, your phone’s motherboard is faulty.

The motherboard connects all the phone’s components, and if the area that maintains the charging gets damaged, you’ll have issues with charging.

You’ll have to take your phone to a highly experienced technician for diagnosing and hopefully fixing the issue.

What If The Problem Can’t Be Fixed? 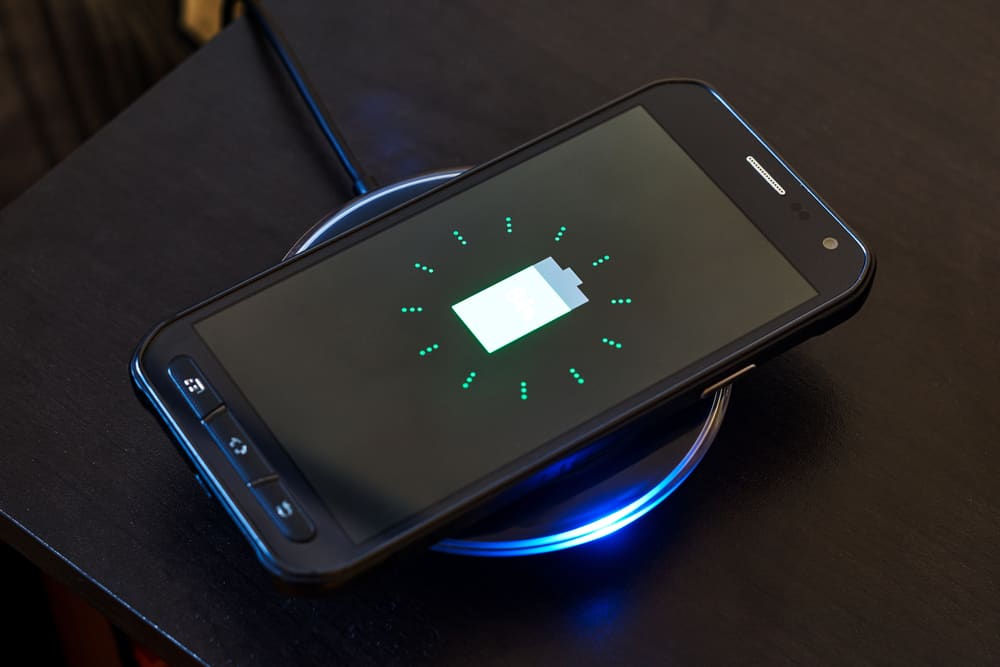 If there’s a problem with the charger, and you don’t have one at hand, or if you find out the charging port is permanently damaged, you can try charging your phone wirelessly, given your phone is compatible.

This solution may not work if there are software or severe hardware issues with the battery or motherboard, but it’s a fair shot before giving up on the phone altogether.

You can also charge your phone using another Qi-enabled device if you don’t have a wireless charger at hand.

Phone Only Charges When Off (Causes, Fixes)