You are here: Home / The Cold Spotlight / Is Walmart Cheaper Than Aldi? (Explained) 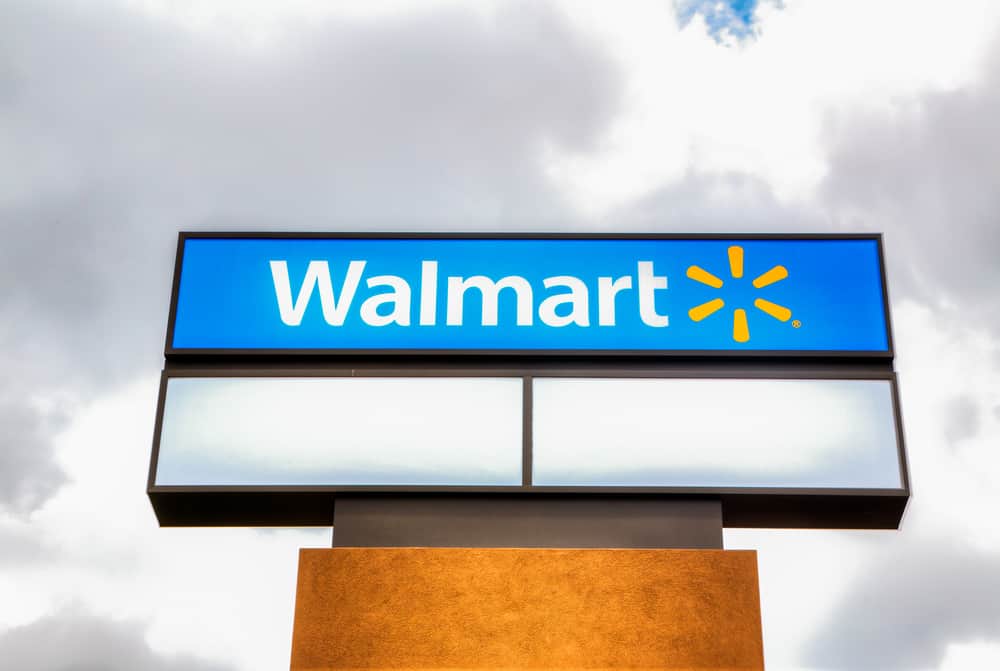 When shopping for groceries, every cent counts.

That’s why many shoppers like to compare different stores to ensure they’re getting the best deal.

When comparing Walmart and Aldi, one might first think that Walmart should have the lowest price.

After all, they tend to match prices and typically strive to have the lowest prices in the market as a general rule.

However, when comparing Walmart’s prices to Aldi’s, it may surprise you which is actually cheaper.

Here’s what you need to about whether Walmart is cheaper than Aldi or vice versa.

Is Walmart Cheaper Than Aldi? 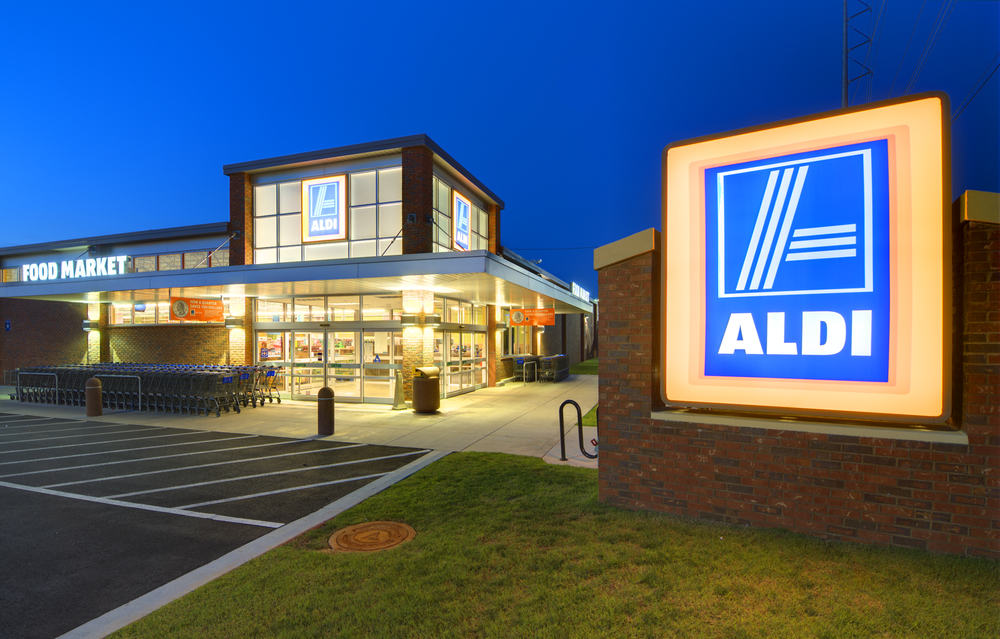 No, Walmart is not always cheaper than Aldi.

In many categories, such as chicken, produce, and snacks, Aldi consistently had lower prices than Walmart.

One should keep in mind that the price difference was typically only a few cents.

However, there were a few categories in which the price difference was quite steep.

An average grocery bill at Aldi after shopping for various food items and basic household products came to $140.90.

That’s a $25.51 difference, and that adds up quickly the more you shop.

Here’s a further breakdown of the price differences between Aldi and Walmart. 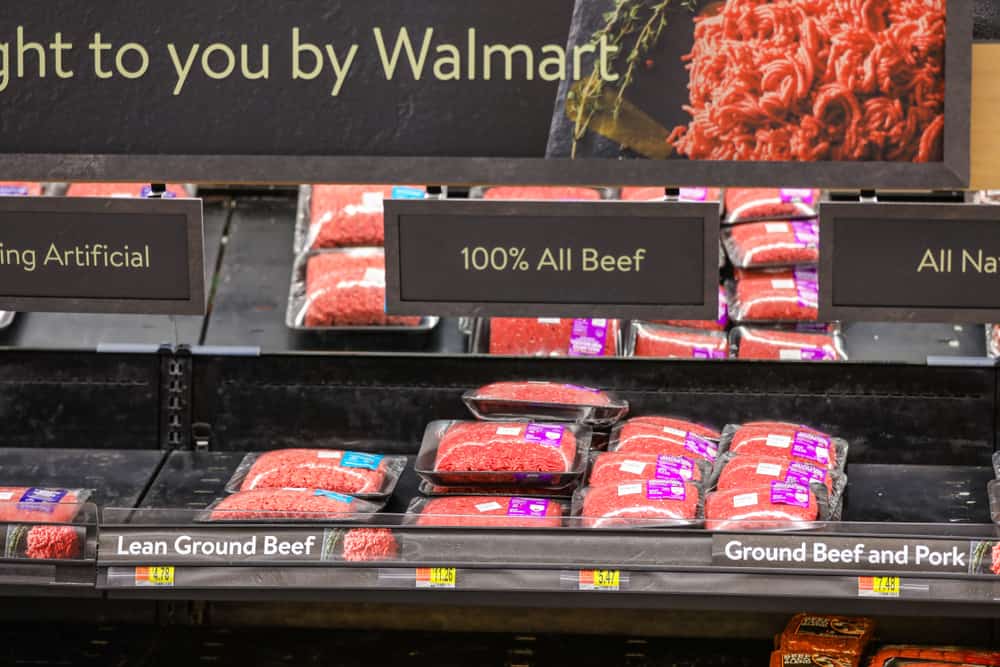 Aldi has a smaller selection of meat than Walmart.

Here are a few comparisons.

It’s also cheaper to buy bacon at Walmart than at Aldi.

However, in most other cases, Aldi’s meat selections ran a few cents cheaper than Walmart’s selection of meat. 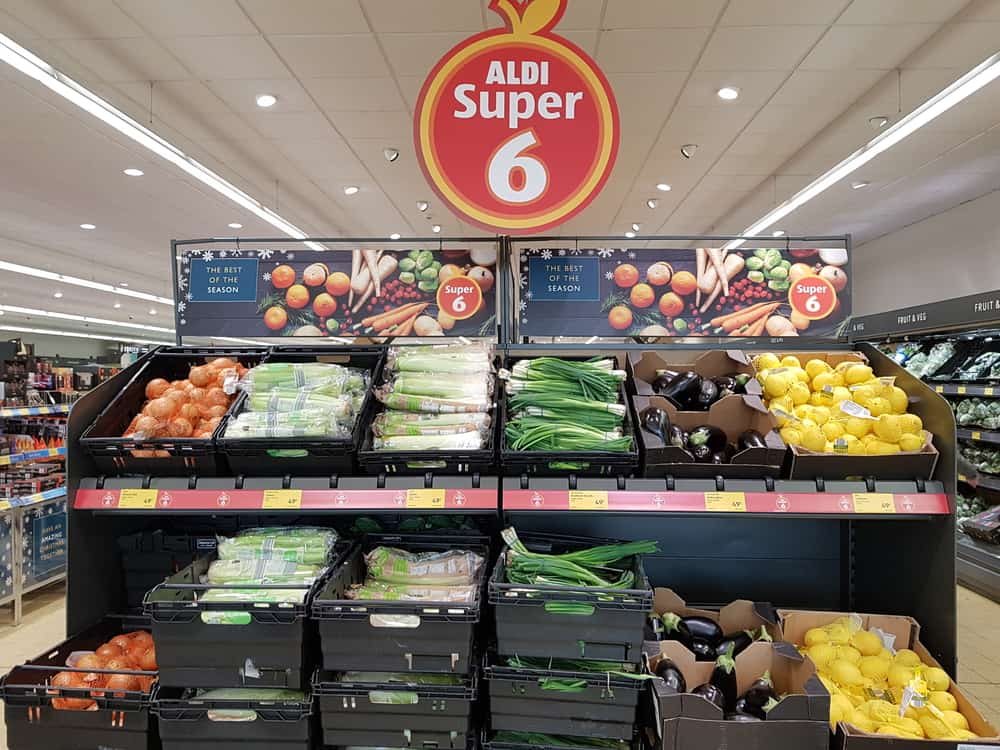 Another important part of the average shopper’s list is vegetables and fruit.

Here’s how Aldi and Walmart compare to one another.

Aldi tends to keep their prices lower than Walmart on most produce items.

Walmart does win when it comes to onions, however, and there’s only a single cent difference in their red grapes.

Produce is difficult to compare, though, since its prices change throughout the day.

In an effort to get out older produce, stores will lower the price to encourage people to buy them.

The season also dictates how expensive certain items are going to be.

Produce that is in-season is less expensive than out-of-season produce. 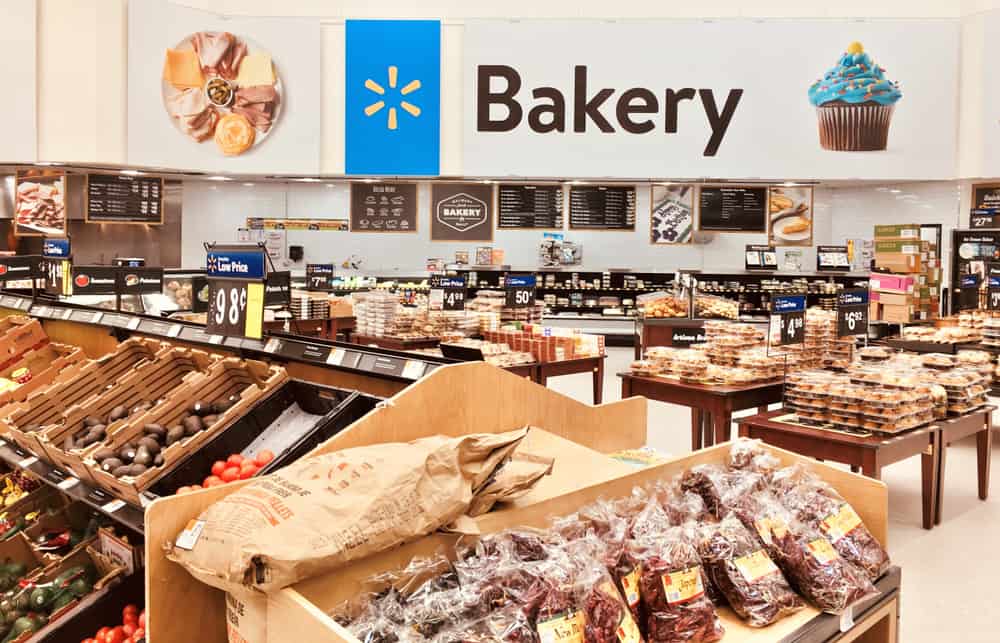 Whether you love toast or need some buns for your burger or sandwich, the bakery is another important purchase for shoppers.

Here’s how the bread and bakery prices compare between Aldi and Walmart.

As is the case with the other departments, Aldi consistently has lower prices than Walmart.

Walmart wins out when it comes to their chocolate mini donuts and gluten-free bread, but the rest of the baked goods are cheaper at Aldi. 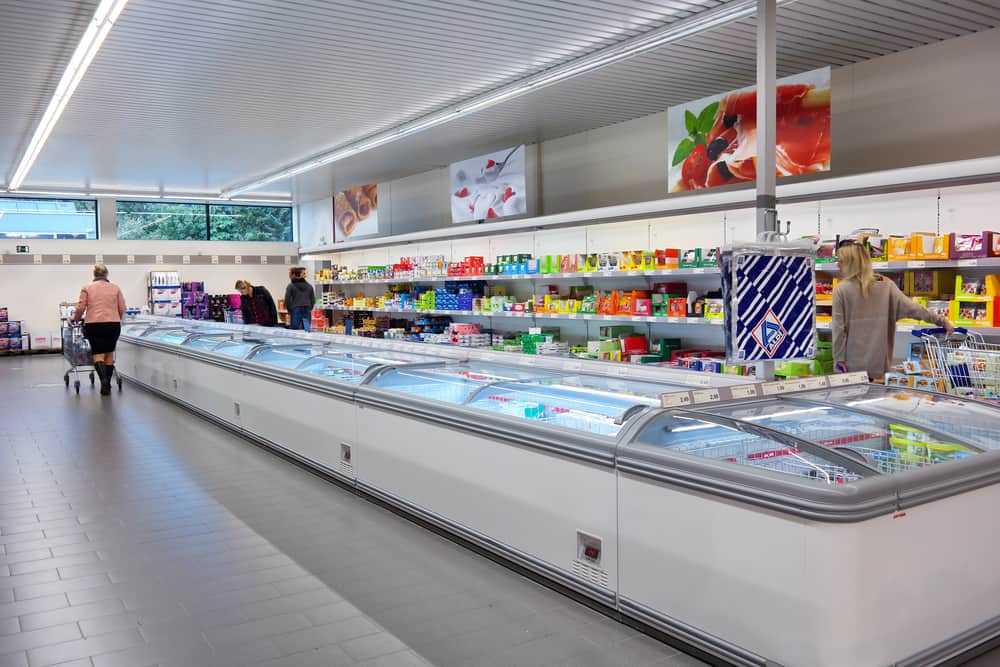 Frozen food can be a working parent’s miracle after a long day at work.

If you need to stock up on some easy meals for the family, here are how the various products compare between Aldi and Walmart.

The differences are pretty split between Aldi and Walmart with regard to frozen food, but Aldi does seem to have the cheapest prices in most cases.

In particular, they had the biggest savings on ice cream.

Walmart had the biggest savings on cooked seafood.

Only a cent difference separated them for veggie burgers. 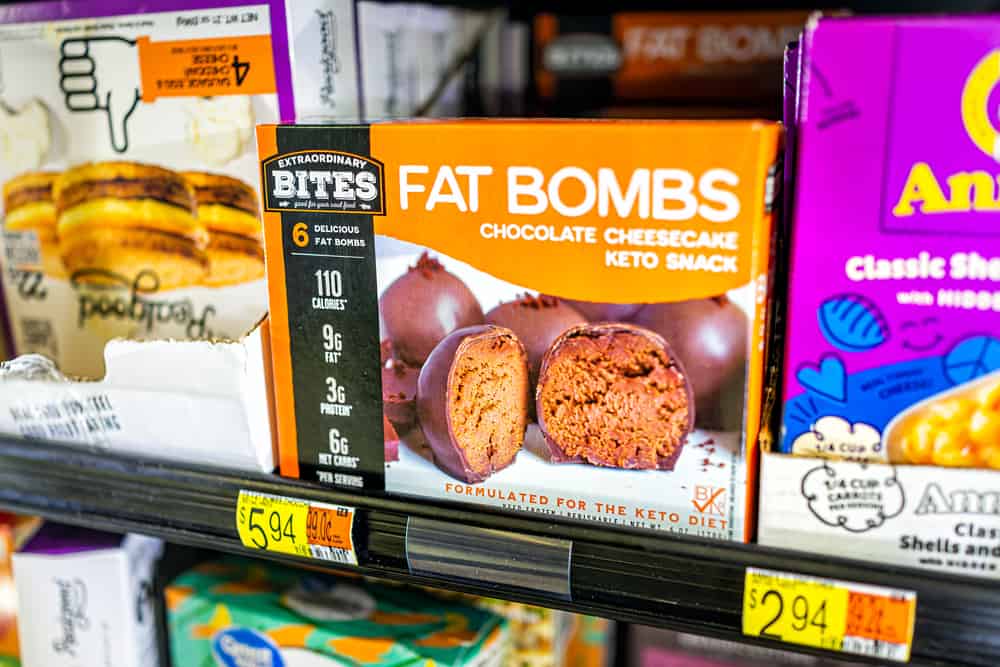 Everyone needs to snack on some food now and then.

Since snacks can easily inflate a grocery budget, it’s important to know which store has the cheapest options.

Here’s how Aldi and Walmart’s prices compare in the snack department.

The steepest difference was their dry-roasted peanuts and apple sauce pouches.

Walmart was the cheaper option when it came to salty snacks like potato chips.

If you’re a fan of dark chocolate bars, then Aldi is where you’re going to want to get your fix. 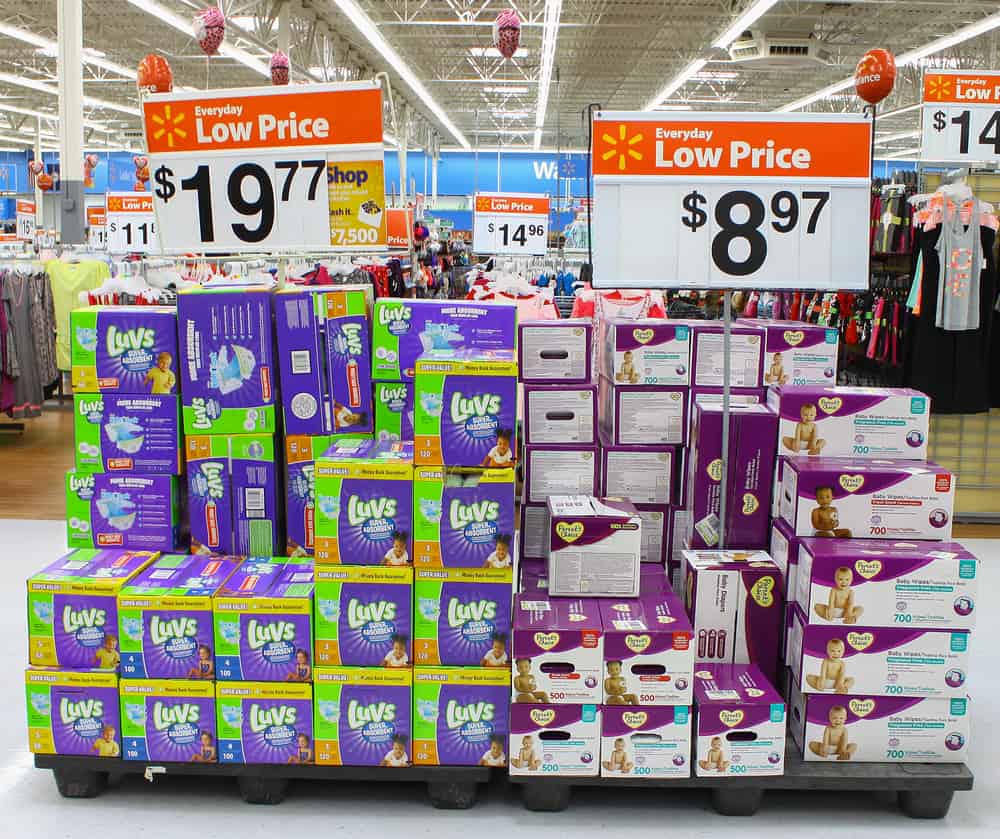 Every household has different needs, but there are a few staples among them that don’t quite fit in any one category.

Here is how Aldi and Walmart’s prices compare for a variety of goods.

One thing to note about diapers is that the per-unit price is actually the same for both Aldi and Walmart.

The math comes down to 11 cents per diaper for each store.

That said, Aldi was cheaper in most cases for the various goods.

Walmart had a clear winner in Coca-Cola.

Why Is Aldi Cheaper Than Walmart? 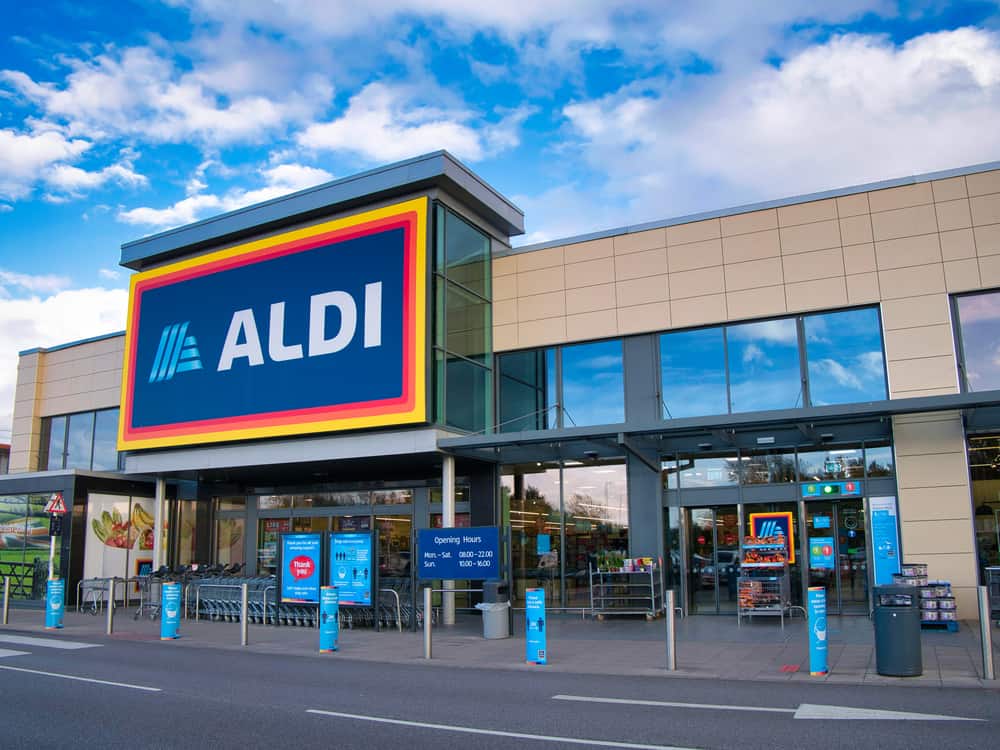 Considering that Walmart regularly advertises itself as the store with the cheapest prices, you may wonder how Aldi manages to get cheaper prices than them.

It all has to do with brands.

Aldi doesn’t carry other brands when they can get away with it.

For example, they carry some name brands like Crest and Coca-Cola because those are specific items that customers want.

However, in most cases, Aldi makes its own products.

It has its own generic brand that it makes which allows them to get the cheapest option for their product.

They don’t have to mark up their prices in order to earn a profit.

Walmart does because they sell a lot of name brands in their store.

Whether it’s Coca-Cola, Crest, Bounty, or other big-name brands, they have to buy them at a higher cost because they’re not making the product themselves.

They then have to mark that item up in price to earn a profit.

Without doing so, Walmart wouldn’t make any money.

That said, Walmart does have its own brand which produces some goods.

That brand doesn’t take up the majority of their store, however.

They still prefer to offer other name-brand products because they know customers trust and want those brands.

The problem is that they’re unable to drive that price lower to compete with Aldi’s low prices.

Aldi is cheaper than Walmart because it uses its own generic brand to keep costs low.

That allows them to sell at lower prices and still earn a profit.

What Are The Differences Between Walmart And Aldi? 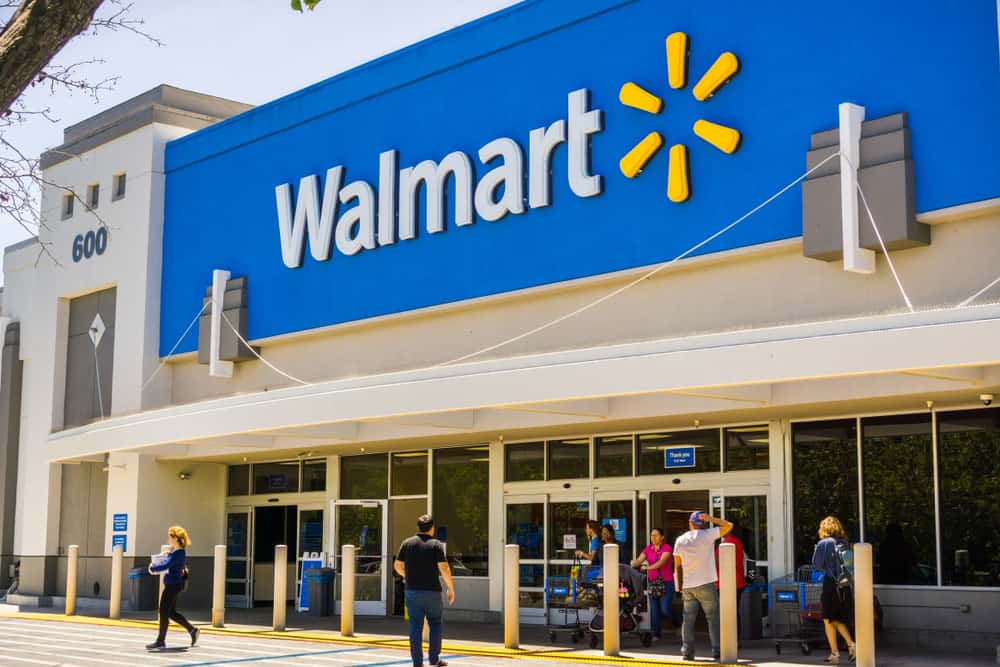 Besides their prices, there are a few other key differences between the stores.

Here are some main differences between Walmart and Aldi. 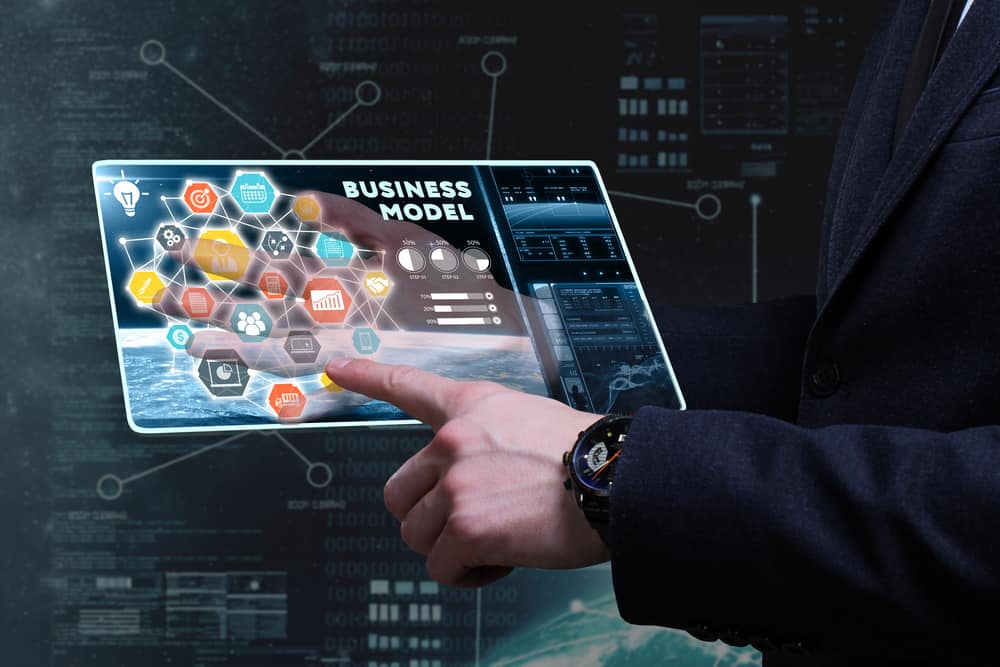 Both Walmart and Aldi use different approaches in their business.

Walmart is a supercenter and considered a retailer with frills.

That means it has tons of different departments and services within the store.

You can usually get a haircut in a Walmart along with buying your groceries, for example.

Aldi is a no-frills grocery store.

It puts its focus and investments towards its groceries since that’s the only thing it sells.

You won’t walk in and find a money center or haircut booth or even a tax booth in an Aldi.

Instead, you’ll find various groceries and products that you can buy.

Because of this, Walmart stores tend to be larger than most Aldi stores. 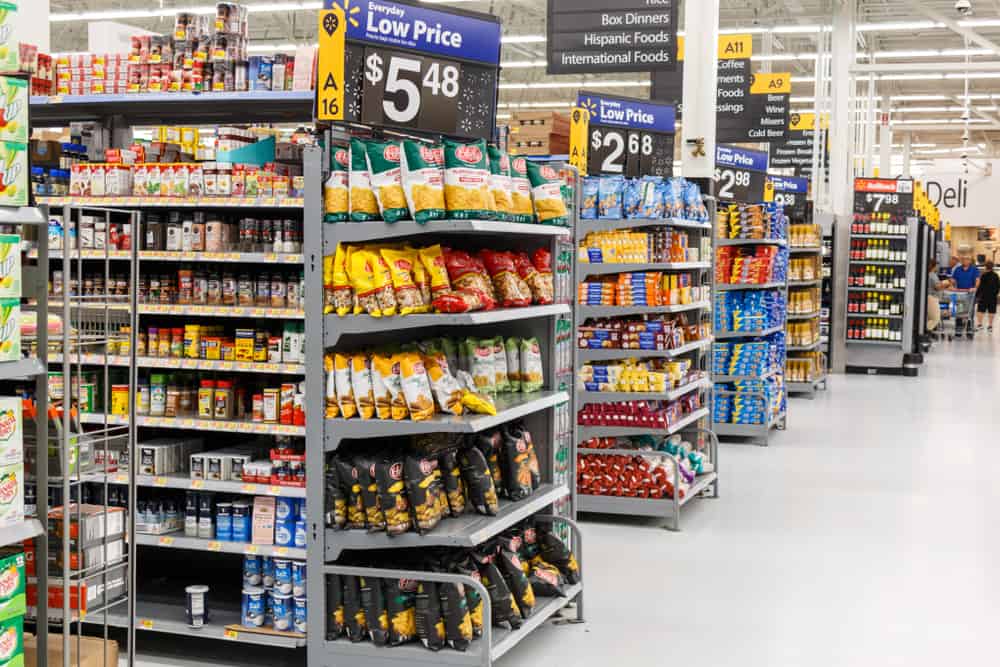 One of the biggest differences between Walmart and Aldi is their selection of brand-name products.

Walmart has a ton of different brand-name items.

They have both big-name brands and independent brands from local businesses.

Along with these big-name brands, they also have their own generic brand.

Aldi only has its own generic brand and a few other big-name brands.

They prefer having their customers buy the products that they make which is why they don’t carry that many brands.

It also helps them keep costs low, so they can sell at cheaper prices.

When shopping at either store, if you want a lot of selection between brands, then Walmart is the better option.

If you don’t mind generic brands and want cheap prices, then Aldi is the best option for you. 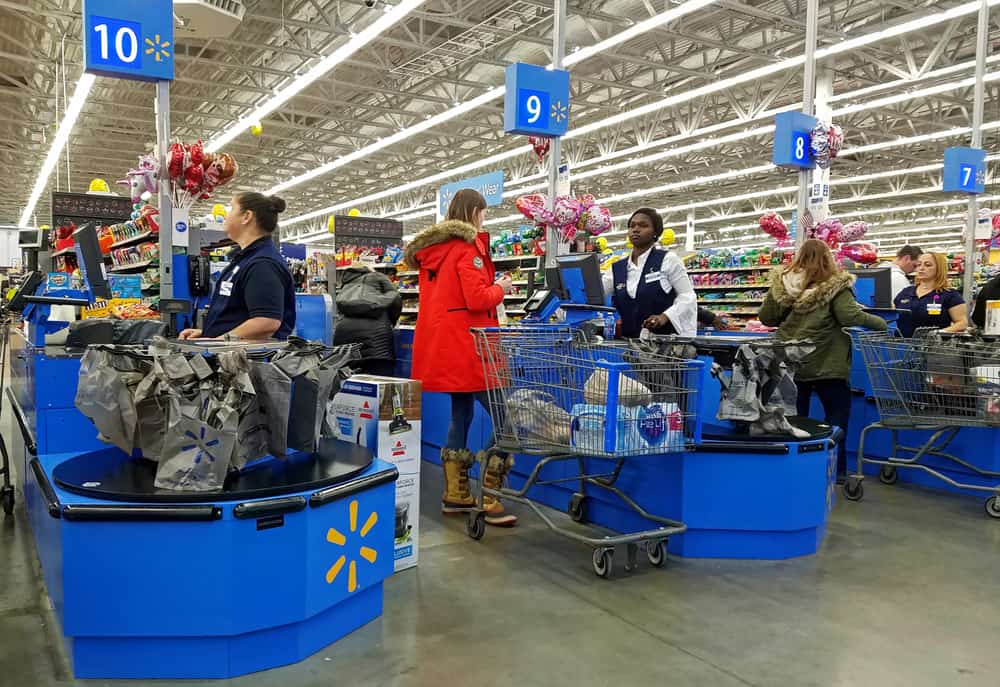 Walmart has tons of different departments within their stores that offer different services.

The most common that you’ll find in any Walmart store is the bakery, deli, and pharmacy.

At the bakery, you can get freshly baked goods and custom cakes made.

At the deli, you can find fresh meat and have them slice your order right in front of you.

Their pharmacy allows you to fill prescriptions and drop off empty medication bottles.

Walmart strives to provide these services to make your shopping experience easier.

You’re able to run several errands in a single location.

The hope is that you’ll buy something extra while you’re there.

Aldi, on the other hand, does not have a deli, bakery, or pharmacy.

They sell everything within their own departments.

They’re looking to entice you to their store with cheap prices and quality goods rather than various services. 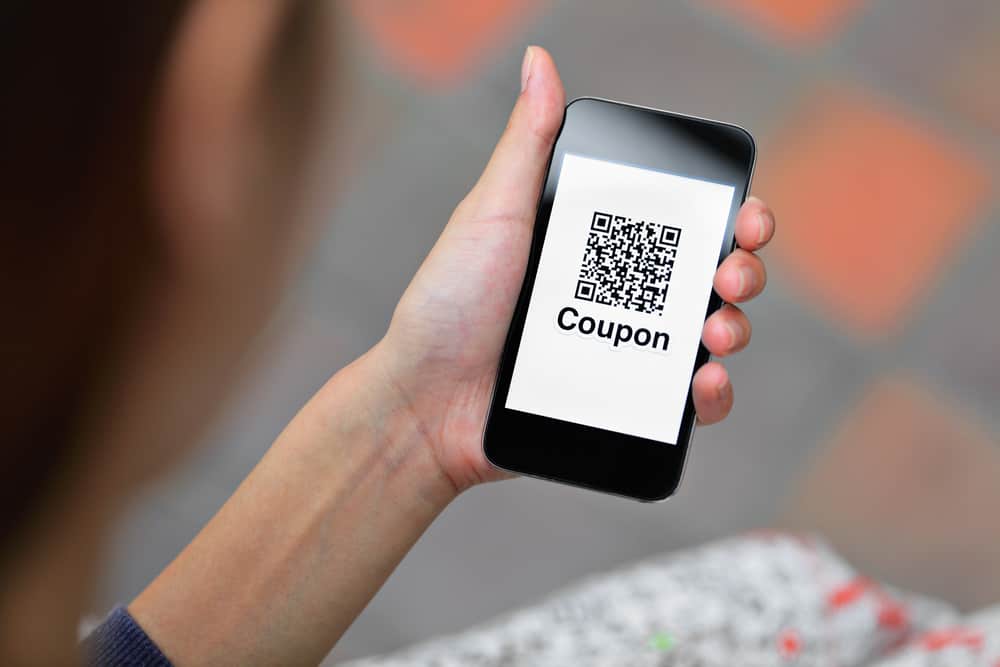 Although shopping at either Aldi or Walmart is already cheap, sometimes you want to make the experience even cheaper.

If you’re a fan of using coupons, then it is worth knowing which store gives you the best benefit.

The answer is undoubtedly Walmart.

You can find several coupons for Walmart stores daily.

They run a few special coupon programs annually and others weekly.

These coupons usually apply to bulk purchases or a certain amount off your entire order, but you can find some for specific products as well.

Aldi, on the other hand, doesn’t accept coupons.

Instead, they run various sales in their store.

Sales are similar to coupons except it usually applies to the product as a whole.

For example, if Aldi is running a sale on beans, then that means you can buy as many beans as you want at the sale price.

A coupon usually fixes a certain number on it.

For example, you can only buy two cans of beans at the price of the coupon.

If you prefer using coupons, then you’ll want to shop at Walmart.

If you like sales, then Aldi is your best store. 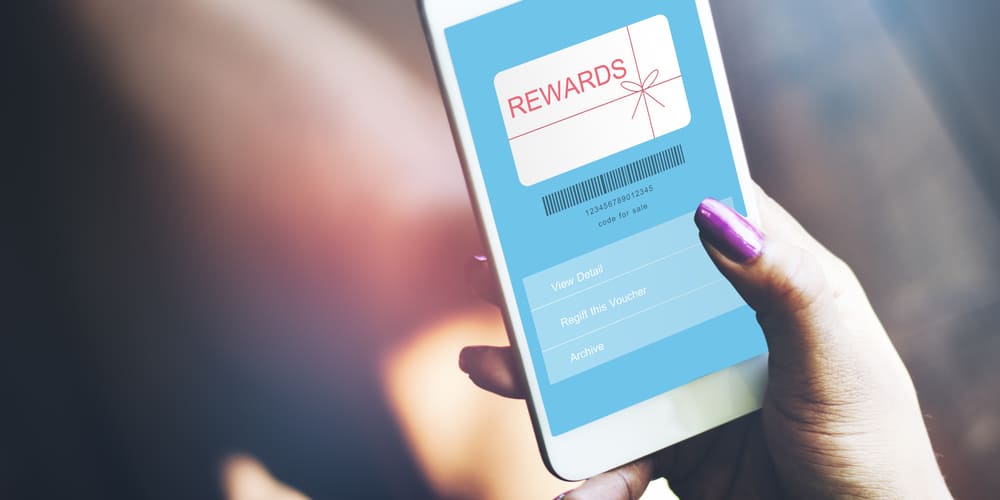 Rewards programs enable customers to save even more when they shop loyally at a store.

After they gain enough reward points, they can usually apply that to receive a special discount or item.

If you’re a fan of rewards programs, then you’ll want to shop at Walmart.

They have their own loyalty program that comes with many different benefits.

The store already gives the lowest price on its goods that it can.

When shopping at Walmart and Aldi, you might expect Walmart to have the lowest price.

In most departments, however, it’s actually Aldi that has the cheapest prices.

Aldi’s able to keep its prices low because it uses its own generic name brand products.

This is one of many differences between Aldi and Walmart.

Is Walmart Cheaper Than Aldi? (Explained)