You are here: Home / Sports / NBA / Is Rajon Rondo A Hall Of Famer? (Full Argument) 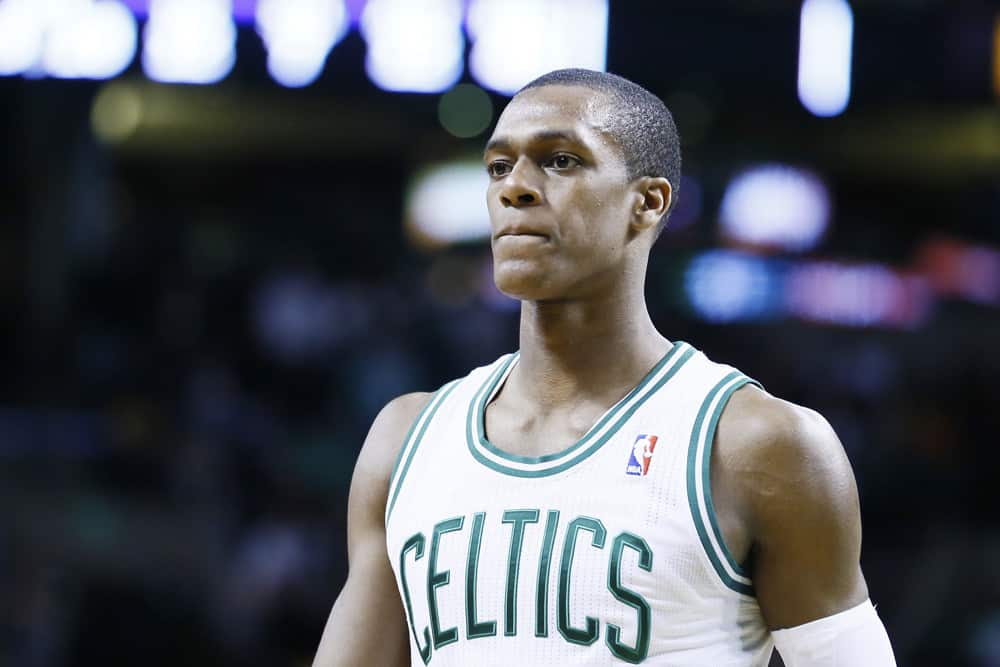 After being the floor general for the great Boston Celtics teams that paved the way for what we now call “Super Teams”, Rajon Rondo has been a bit of an afterthought in the NBA world.

This is likely due to the fact that this year’s Atlanta Hawks are his sixth team in eight years.

Rondo has gone from a four time All Star from 2009-2013 to an NBA journeyman leading many to believe that his best years are behind him.

However, his name has started to bounce around some NBA circles as a future Hall of Famer after winning his second title with the Lakers this past season.

While this may sound crazy at first, the argument for Rajon Rondo and the Basketball Hall of Fame is not as far-fetched as one may believe.

Basketball Reference uses a Hall of Fame Probability algorithm to predict an NBA player’s chances of being inducted into the Naismith Hall of Fame.

According to its calculations, Rondo has a 60% chance of making it into the Hall.

While that may seem pretty low, it is more than some players who look to be on their way there such as Kawhi Leonard (57%) and Klay Thompson (51%).

What is even more shocking is the amount of players who are in the Hall of Fame whose probability is even lower than Rondo’s.

Rondo showing the WORLD why he’s a future Hall Of Famer!!! Carry on…

Cheeks played 14 seasons in the NBA for the Sixers as well as a few other teams at the end of his career.

His career totals include averaging 11.1 points, 2.8 rebounds, and 6.7 assists per game.

He, like Rondo, was a four time All Star to go along with being a five time All Defense selection and winning one NBA Title with Philadelphia in 1983.

Cheeks was selected to the All Defensive Team one more time than Rondo, but the former Celtics floor general led the league in assists three times and steals once, and he was also selected to an All NBA team in the 2011-2012 season.

Those are all things the Sixers point guard never accomplished.


Oh yeah, and he also has one more title than Cheeks as well.

Both players were known to be pass and defense first point guards who struggled to shoot the ball from the outside.

If Cheeks was voted into the Hall of Fame, it is hard to not consider Rondo.

The Case Against Him

The biggest case working against Rondo is his recent short stints with teams.

He has been delegated as of late to more of a reserve role, and some coaches and teammates have pointed out that the point guard is difficult to work with and can be high maintenance.

Are the Boston Celtics looking to trade Rajon Rondo because he is too high maintenance? http://t.co/I54U7XmS #FOX25

This significantly hurts his case as the Basketball Hall of Fame is normally willing to induct players who had relatively modest numbers but played significant roles on great teams (Cheeks, Dennis Rodman, Dennis Johnson).

If Rondo’s Boston years are the last thing fans and writers remember about him, he would certainly be welcomed into Springfield.

Unfortunately, these years as a back-up who can sometimes cause team chemistry issues are on the forefront of their minds.

Despite this, Rondo should be inducted into the Hall of Fame after he retires due to the simple fact that his body of work is as good if not better than so many who have come before him.

The Basketball Hall of Fame is not just reserved for the league’s best scorers and most popular players, it is reserved for players who had great careers.

Is Rajon Rondo A Hall Of Famer? (Full Argument)