You are here: Home / Sports / NFL / Is Pete Carroll Overrated? (3 Reasons Why He Is Not)

The Seattle Seahawks are consistently in playoff contention.

Each year, the team seems to thrive around quarterback Russell Wilson who can engineer his own highlight reel.

Is the well-oiled machine known as Seattle a function of the great players or their coach Pete Carroll?

And is Pete Carroll overrated?

Pete Carroll has a lot to do with Seattle’s consistency over the years, and he is not overrated.

Here are 3 reasons why is not overrated. 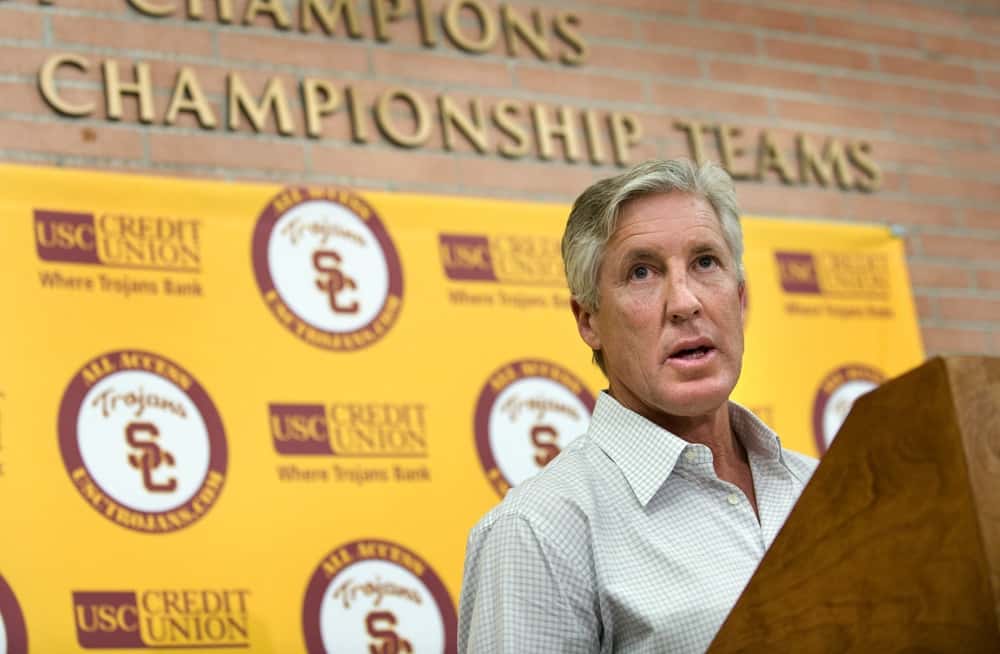 There are plenty of coaches that hop from the NCAA ranks to the NFL who have very little success.

Those who do find successful careers rarely have coached championship teams in both college and the professional level.

Pete Carroll is one of three coaches who has done it.

The other two are former Dallas Cowboys coaches Jimmy Johnson and Barry Switzer.

Johnson won a National Championship with Miami in 1987 and followed it up with back-to-back Super Bowl victories in 1992 and 1993.

Carroll was a two time National Champion at the University of Southern California (USC) in 2003 and 2004.

He won Super Bowl with the Seahawks in 2013.

2. One Bad Play Call Away From Another Super Bowl Title

Pete Carroll is really one play away from being a back-to-back Super Bowl Champion.

His Seahawks should have won the 2014 Super Bowl, but he made what some have called the worst play call in the history of the NFL.

With 25 seconds left in the game, the Seahawks had the ball on 2nd down and goal on the Patriots’ 1-yard line.

The Seahawks were trailing the Patriots 28-24, and running back Marshawn Lynch was in the prime of his career.

Instead of calling a run play for Lynch, Carroll called a pass play that was intercepted by Patriot Malcolm Butler.

The Patriots ran out the clock and won the Super Bowl to the shock of Seattle Seahawk fans.

3. Longevity and Vitality Make Him Among The Best In the NFL

Carroll has had two stints in the NFL between his time at USC.

He has been back in the NFL since 2010 with the Seahawks.

Pretty amazing run for Pete Carroll in Seattle. Over 11 years, Seahawks have made the playoffs 9 times, won playoff games in 7 of those years (this year would make it 8), and won 5 division and 2 conference titles, along with winning Super Bowl 48.

Not bad for a "college" coach. https://t.co/tKDCDexJSk

Carroll’s NFL record is 155-103-1, and he is in elite company among the top 20 winningest coaches in NFL history.

He has done all of his and is only 69 years old.

When asked about his 10 years at Seattle, Carroll said:

“Coming back to it now, in these 10 years I’ve had a blast. This is really fun. I’ve loved the relationship with the players, which I always really cherished in the NFL because the guys were always so serious and they love playing. People think that they’re big hotshots and that they’re hard to deal with. They’re not like that. They love what they’re doing and they care so much and they compete so earnestly. Lots of times you feel like you’re pasting things on the college kids: You put sticky notes on them and stuff so they remember things. The relationship [with pros] is in a different stage of their lives. So I’ve always loved the league for that, and I’ve loved the league for how competitive it was. You’re going against the best in the world and you can’t ask for more than that if you really want to compete. So that’s always been fun and then this has been a marvelous place to work and to live and to represent.”

Sean Wagner-McGough of CBS Sports recently ranked Pete Carroll as the 8th best coach in the NFL prior to the 2020 season.

“If this list was based on wins and losses alone, Pete Carroll would rank closer to the top,” Wagner-McGough writes. “In his 10 seasons as the Seahawks’ coach, he’s posted a 100-59-1 record (62.8 percent). He’s taken them to two Super Bowls, one of which they won. He’s missed the playoffs only twice. Since he got Russell Wilson, he’s missed the postseason once. With Wilson, Carroll’s Seahawks have never finished worse than 9-7. Carroll was always a lock to make this list. If coaches are judged on wins and losses (spoiler alert: they are) then Carroll is one of the best coaches in football.”

Top 10 coaches in the NFL
(According to @seanjwagner)

Eagles Take Home An Impressive Honor For Their Offseason Work

Is Pete Carroll Overrated? (3 Reasons Why He Is Not)