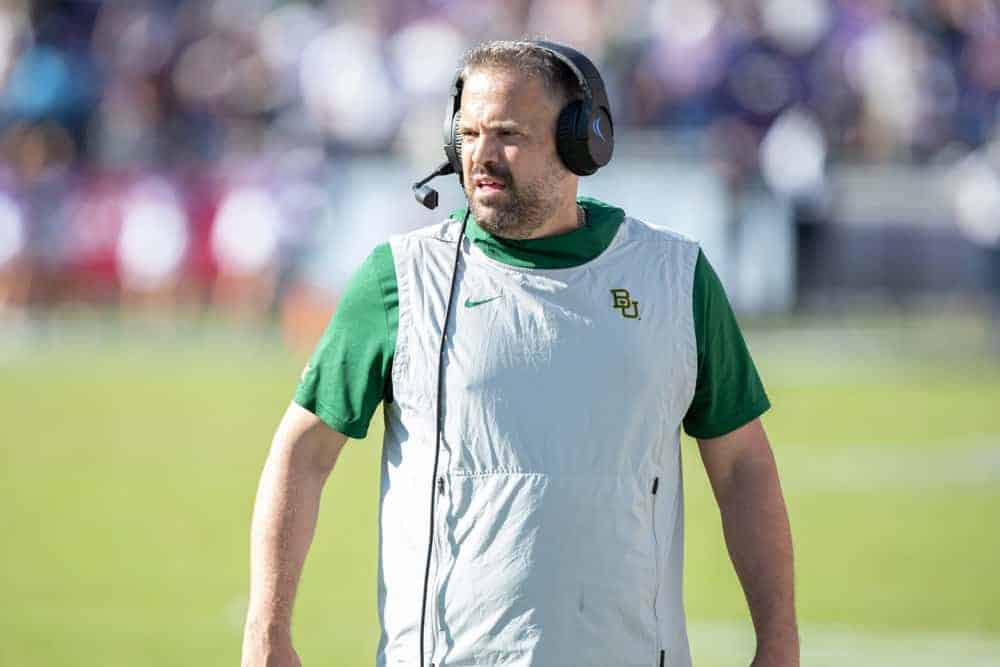 Among the crop of rookie coaches to enter the NFL head coaching ranks this year is Carolina Panthers head coach Matt Rhule.

Rhule succeeded in the NCAA by turning failing programs around at Temple and Baylor.

Could a renowned “fixer” of college football programs succeed in the NFL?

Or is Matt Rhule overrated?

Rhule’s first coaching job was at the University of Temple where he coached from 2013-2106.

He won only 2 games in his first year, but the program was a mess.

The Temple football program had never won 10 games in a year before then.

Rhule turned around the program in a hurry and was known as a great recruiter.

He was able to lure future NFL players such as Tavon Young, Robby Anderson, Tyler Matekevich, and Haason Reddick.

Rhule started coaching at Baylor in 2017.

The program was on the verge of trouble after getting hit with the death penalty from the Art Briles scandal.

Rhule won only one game in his first year at Baylor.

This put him on the radar of many people in the NFL for a head coaching job.

Rhule’s Contract With The Panthers

He signed a seven-year, $60 million dollar contract to coach the Carolina Panthers.

The Panthers are betting that he can be a fixer because they are paying him big money.

This was a mind-boggling dollar figure given that his only NFL experience was as assistant offensive line coach for the New York Giants in 2012.

Rhule walked into a Carolina franchise with very little success in the playoffs, only 6 division championships in 25 years.

Given the money and pressure put on Matt Rhule, people will be expecting instant gratification and success from this Carolina Panthers team.

Arguably, Rhule should get a pass this year.

The pandemic and his roster have limited what he can do.

And no one expected Carolina to turn into a contender so quickly.

2020 is a rebuilding year for the Panthers.

Christian McCaffrey is a building block, but he is routinely challenged with injuries.

No surprise, but Panthers' RB Christian McCaffrey officially will be out tonight vs. Packers as he recovers from his quad injury, per source. Even with two games left after tonight, McCaffrey still wants to play again this season; question is whether the Panthers let him.

Rhule says he "absolutely" believes Teddy Bridgewater is the QB for this team as they look to rebuild despite the late game struggles.

Jury Remains Out On Rhule

It’s too early to tell if Rhule will succeed or be a bust.

If he can translate his college success to the pro level, he will.

Not every college coach is cut out for the NFL, look at Chip Kelly as a prime example.

Anyway, he needs draft picks and time to build a team.

And then he can be judged.

It remains to be seen how patient the Panthers will be.

The franchise is celebrating its 25th year in the NFL, and none of those previous teams hoisted the Lombardi Trophy yet.

Speaking of Super Bowl Champions, Rhule’s team can take solace in being a formidable opponent to the Chiefs this season.

The Panthers lost a close one to the Chiefs 33-31.

The Carolina Panthers team became an NFL expansion team in 1993 and played their first season in 1995.

5 coaches preceded Ruhle with the Panthers.

The franchise’s best seasons were in 2003 and 2015, both seasons concluded with trips to the Super Bowl.

And both teams lost.

The 2003 team was heralded as one of the toughest defenses in the NFL, and 2015’s team had Cam Newton at his absolute best leading the offense.

John Fox led the Panthers to the 2003 Super Bowl; whereas, Ron Rivera led the 2015 to the Super Bowl.

The Panthers are counting on Matt Rhule to build a team that once again leads them to the Super Bowl and wins the first ever Super Bowl Championship for the franchise.

What Happened To Stetson Bennett?

Matthew Stafford Will Be Shocked By A Pro Bowl Fact

An NFC Championship Blowout Did Not Hurt TV Ratings