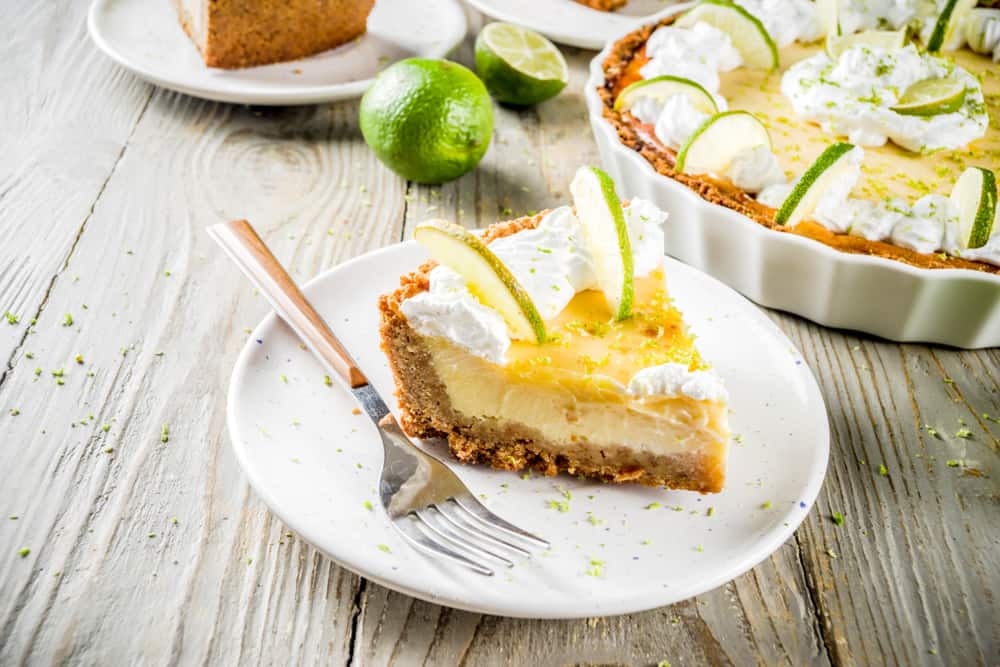 It mixes sweetness with a bit of tartness to make a light and refreshing type of dessert.

Because key lime pie is so light and airy, and sometimes uses similar ingredients, you may wonder if it qualifies as a type of cheesecake.

If you’re a fan of cheesecakes and key lime pies, here’s what you need to know about both of them.

Is Key Lime Pie A Cheesecake? 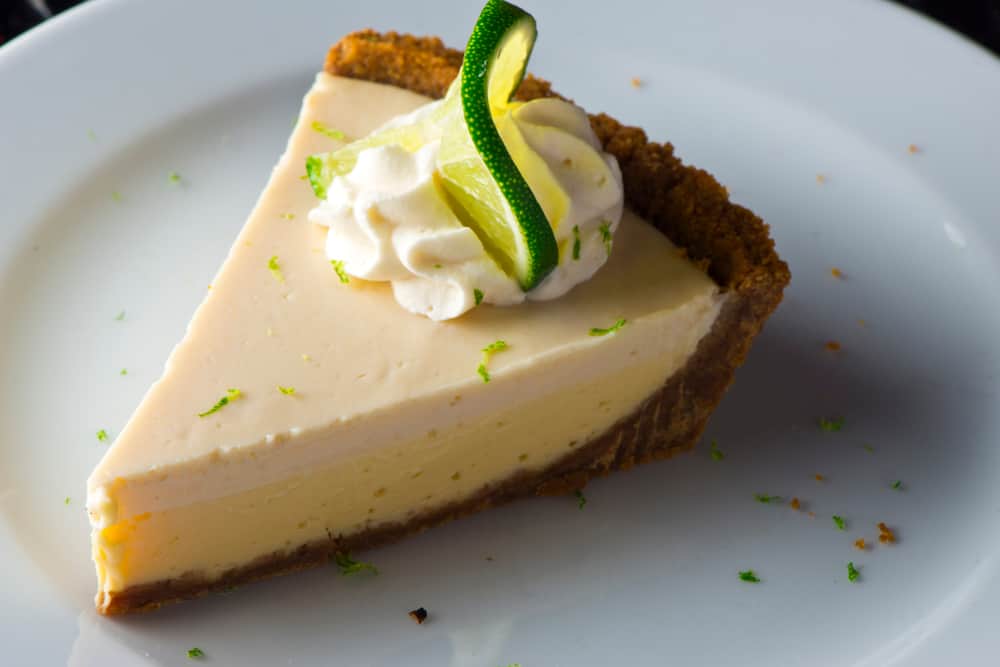 No, key lime pie is not a cheesecake.

A cheesecake doesn’t always use some sort of crust.

It does sometimes go on top of something, similar to frosting a cookie, but it doesn’t use a pie crust. 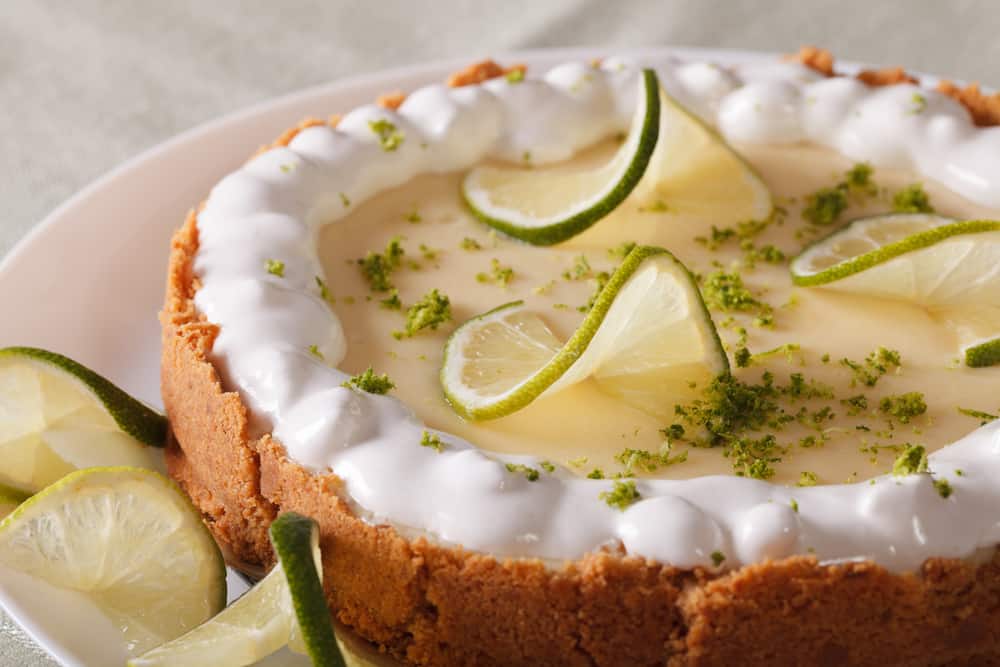 You can easily turn a key lime pie into a key lime cheesecake by switching up some of the ingredients.

A key lime cheesecake will have all the same delicious flavors as a key lime pie, but it will also taste like a cheesecake.

It also tends to be a bit thicker than a key lime pie.

Finally, it has more height than a key lime pie.

If you want to make a key lime cheesecake, it’s relatively easy to do so.

You’ll need a total of nine ingredients to make the actual cheesecake parts.

Here are the steps you need to follow to make a key lime cheesecake. 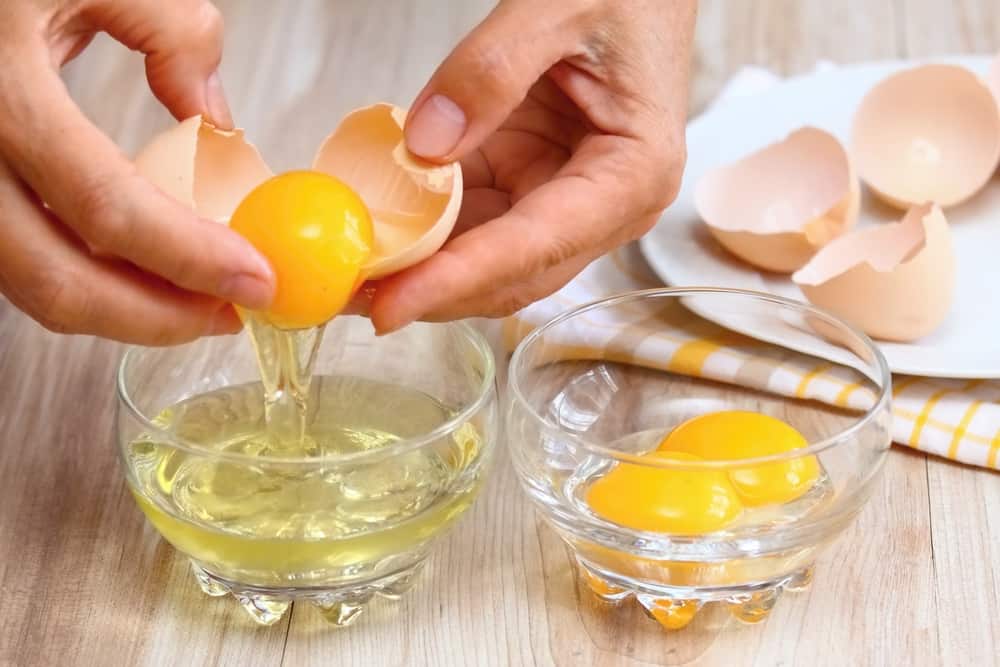 The first thing to do is to make your curd.

To do so, you’ll need to whisk the curd ingredients together.

Those ingredients are egg yolks, key lime juice, a bit of salt, and some sugar.

Put those ingredients into a saucepan and whisk them together.

Once the ingredients get whisked together, you’ll want to add some butter.

Then put the saucepan on the stovetop.

Set the stovetop to medium heat.

You’ll want to whisk the curd throughout this process.

Once it starts to thicken, you’ll need to remove it from the heat.

You’ll know it’s at the right thickness when it turns opaque.

Remove the curd from the saucepan by spilling it through a mesh strainer into a bowl.

At this point, you’ll need to let the curd cool for some time.

You can speed up the process by lining a bowl with parchment paper, then sticking it into the fridge for 30 minutes. 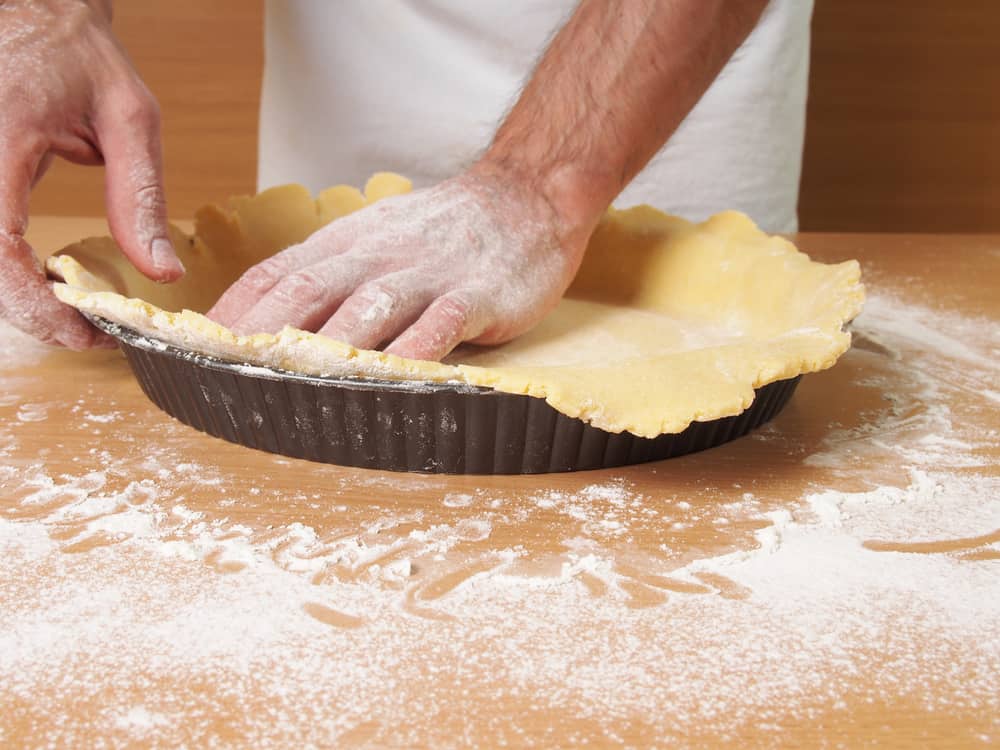 Making the crust is relatively simple.

You’ll need to take your graham crackers and stir them together with sugar.

You’ll then need to add butter to the mixture and stir some more until you make the graham crackers moist with it.

Once everything mashes together, you’ll need to get out a springform pan the size of the cheesecake that you intend to make.

9″ is usually an ideal size.

Then take the mixture and press it into the bottom of the pan hard.

You’ll also want to layer the crumbs along the sides of the pan.

Once it’s lined with crumbs, you can set the pan aside and wait for the curd to cool. 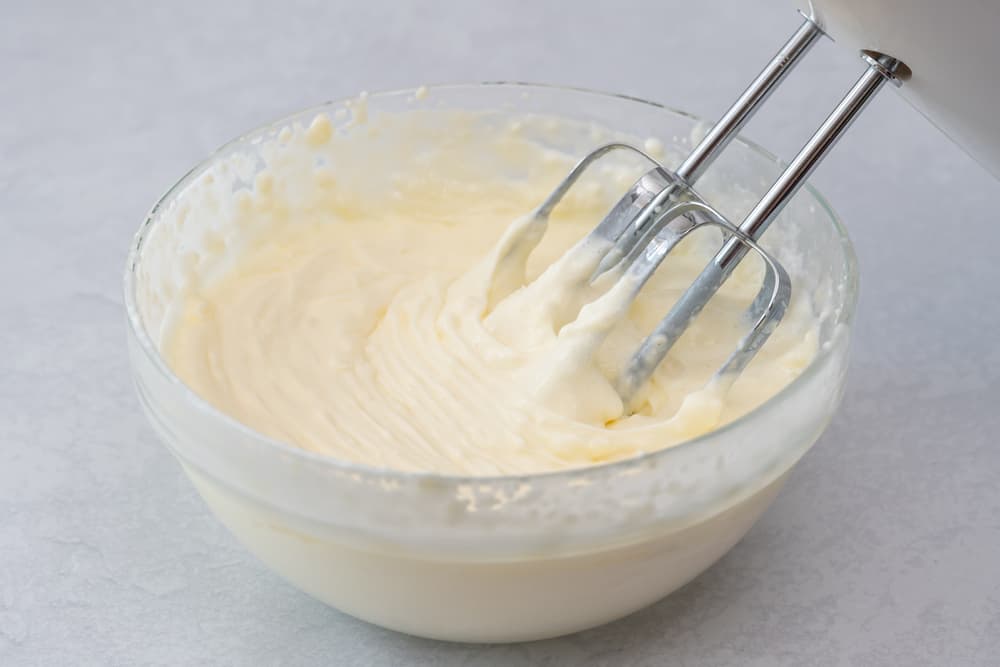 The final step is to make the cheesecake part of the dessert.

You’ll need to start with a mixer.

Add cream cheese and granulated sugar into the bowl and start mixing.

You’ll want to mix the ingredients until everything mixes into one substance.

Then you can add sour cream and mix that until it’s also fully blended into the rest of the mixture.

Since you don’t want to leave any clumps of sour cream behind, it’s worth taking a spoon to scrape the sides of the bowl.

Then mix again to ensure everything gets mixed together.

If you’re using an electric mixer, then you’ll want to set it on a low speed for the next part.

For standard mixers, just be aware that you’ll want to gently mix during the next step.

You can now add your cooled curd to the bowl and mix it in with the rest of the ingredients.

Keep the mixer at a low speed while you add eggs next.

You’ll need to put two eggs into the mixture, but you’ll want to mix each one separately.

As with the sour cream, make sure you scrape off any ingredients on the sides or bottom of the mixer to ensure everything gets mixed thoroughly.

Your cheesecake is now ready for baking.

You’ll want to set the oven at 325 degrees Fahrenheit.

With the oven set, you can pour the batter into the prepared pan from before.

Make sure to make it as even as possible.

Then put the pan inside the oven and let it bake for 50-60 minutes depending on the power of your oven.

Once the middle stops jiggling, the cheesecake is ready to take out of the oven.

Let it cool for about an hour at room temperature.

Then you can put it in the fridge for six hours.

After that, your key lime pie cheesecake is ready to eat.

What Type Of Pie Is Key Lime Pie? 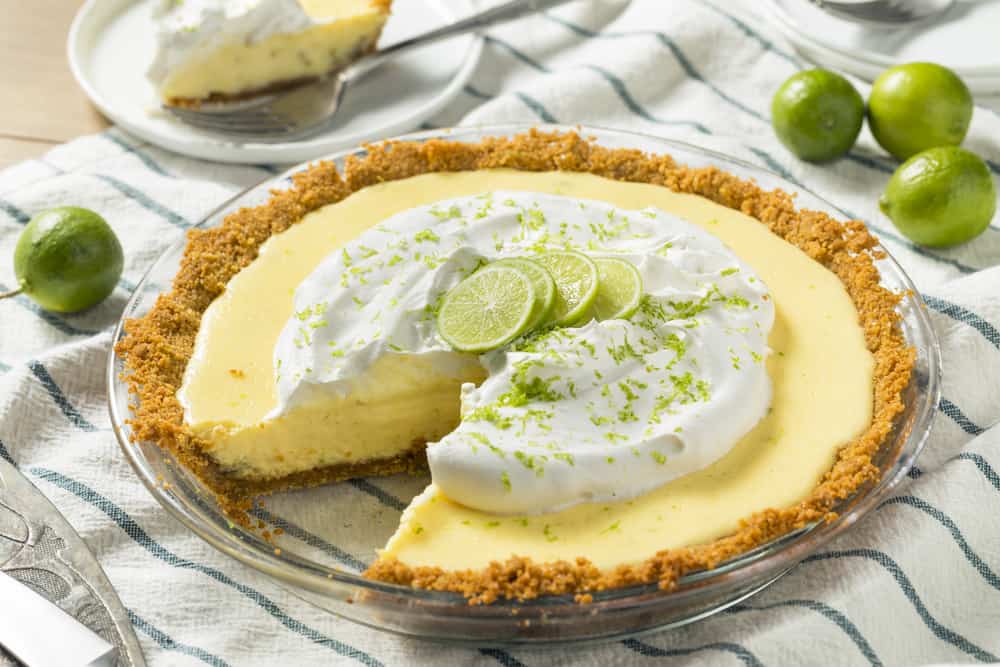 Key lime pie is an American dessert that uses yellow custard, a graham cracker crust, and a whipped cream or meringue topping.

One reason that key lime pies became popular there was that it was rare for those who lived in the Keys to get fresh milk.

They also didn’t have reliable refrigeration for some time since they were so far from the major cities in Florida.

Because of that, they had to use sweetened condensed milk as a staple rather than fresh milk.

It became essential there.

Limes were also quite popular in the Keys.

However, a series of hurricanes made growing them commercially impossible.

The Keys are often in the path of hurricanes and tropical storms.

The force of those storms tore lime trees up.

Because of that, most key limes are grown privately.

Gardeners then make key lime pies for their own enjoyment, to sell at farmer’s festivals, or to sell to restaurants. 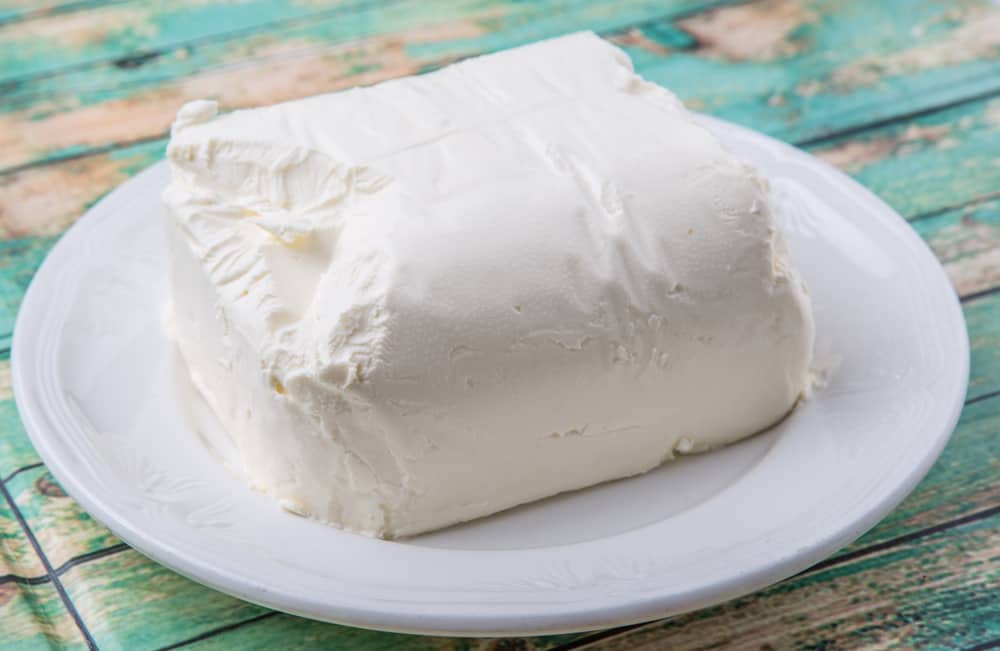 The cream cheese gives the pie the sort of creaminess that you might expect in a dessert.

Besides adding a creamy texture to the pie, the cream cheese also gives the key lime pie a delicious flavor.

As such, it’s a staple ingredient of the recipe.

While you can replace cream cheese with other ingredients, if you want a traditional key lime pie, then you’ll need cream cheese. 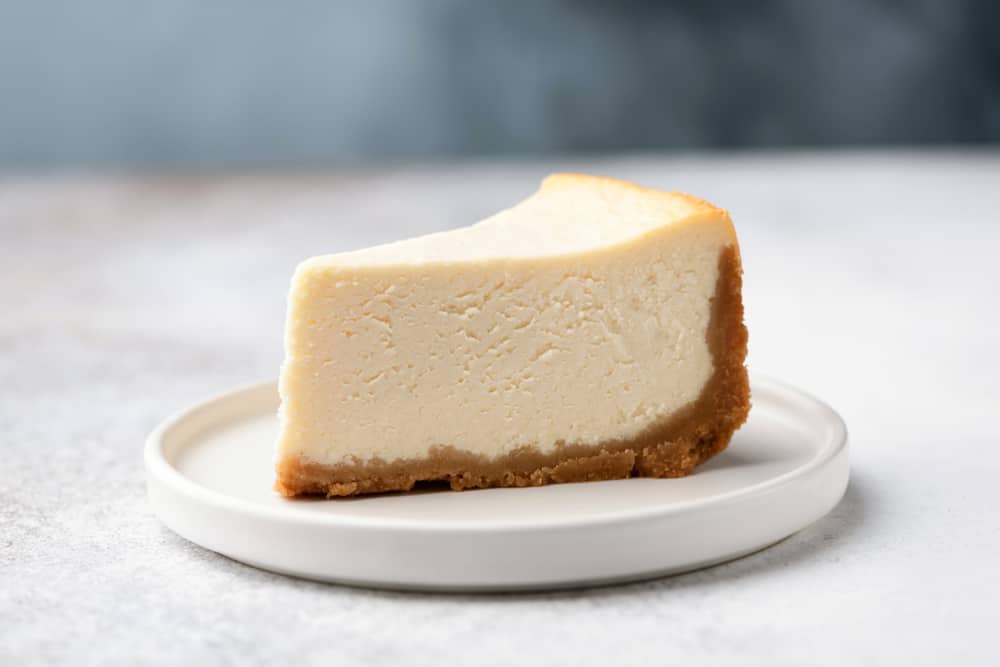 Cheesecake is a type of custard that you bake and usually put on some sort of pastry or cookie.

There are several different types of cheesecakes.

Each one uses a different type of cheese.

The type of cheese used determines the flavor, appearance, and texture of the cheesecake.

Not very many other types of dessert use cheese as an ingredient.

They used fresh cheese that they pressed into patties.

Then they pounded those patties into flour and added honey.

They’d then use a grill to cook the cake.

It wasn’t until medieval Europe that cheesecake emerged in its tart form.

The English used a pastry base to cook their cheesecake.

In Medieval Europe, there were two main types of cheesecake.

One used curd and the other used ruayn.

They also started using egg whites and rosewater in the ingredients.

Because the English enjoyed cheesecake, it was eventually brought over to the American colonies.

It was in the 1930s that curd got replaced as the primary ingredient for cheesecake.

In its place, a softer and fluffier type of cheese got introduced: cream cheese

Cream cheese transformed cheesecake into a light and airy dessert.

Since then, bakers have delighted in making different variations of cheesecake with cream cheese as its base.

Why Is A Key Lime Pie Called Key Lime? 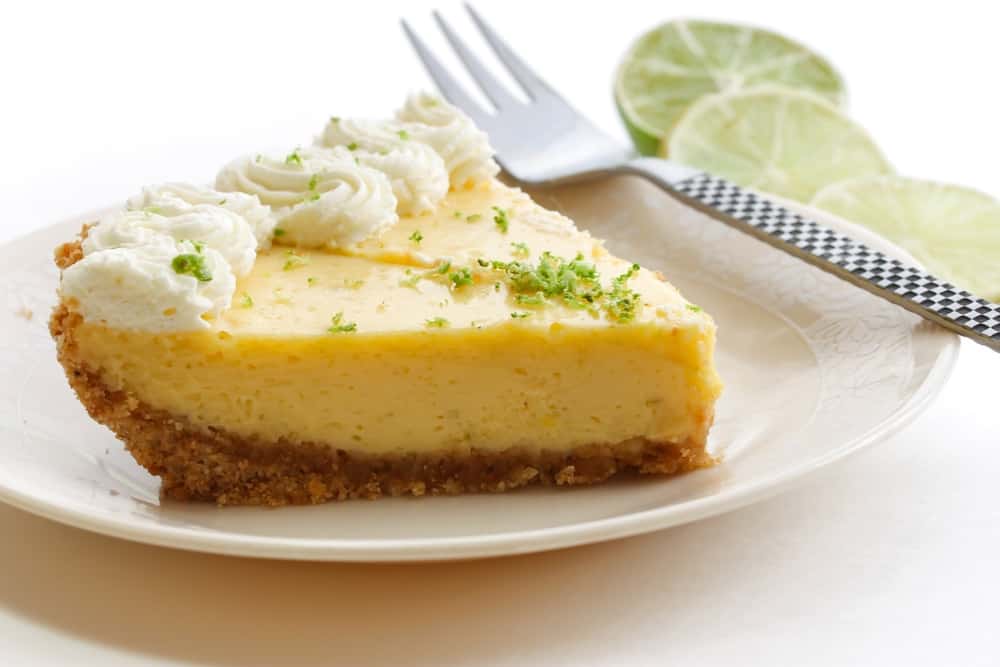 Key lime pie receives its name from the type of lime that it uses.

The Florida Keys are responsible for the invention of the key lime pie.

Because the Florida Keys are close to the tropical center, it has an environment in which limes grow well.

Those who lived in the Keys started to make a pie out of them.

However, because the Keys were still primarily cut off from the rest of Florida, they didn’t have a reliable source of fresh milk or refrigeration.

To make their milk last, they had to use sweetened condensed milk.

They used that to make their key lime pies.

As such, the key lime pie took its name from its place of origin, the Florida Keys, and the main type of fruit used in it, key limes.

What Flavor Is A Key Lime Pie? 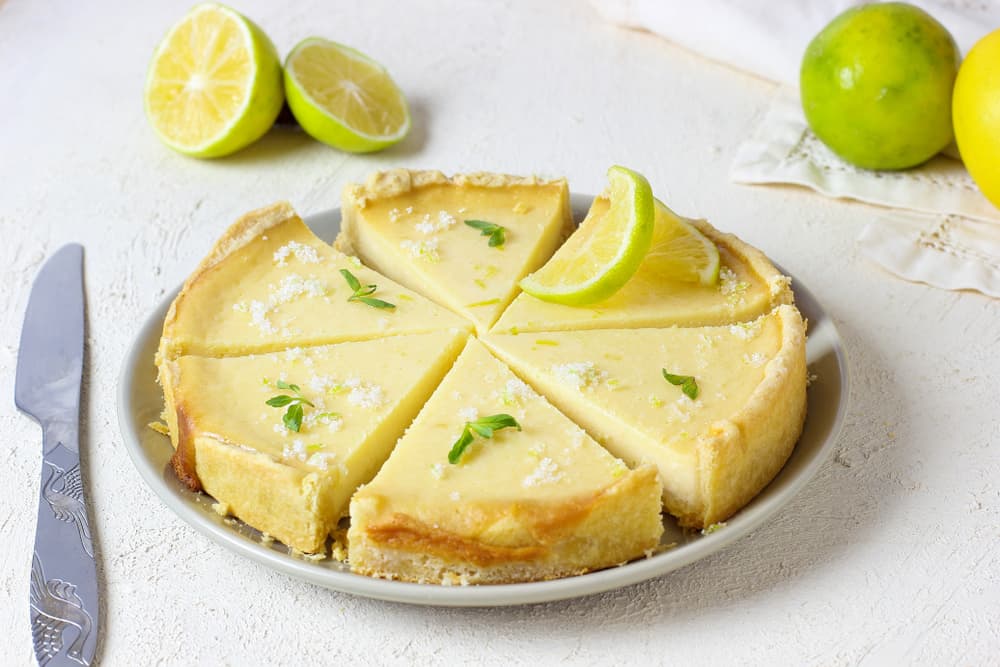 If you’ve never tried a key lime pie before, you may wonder what it tastes like.

The best way to describe the flavor of key lime pie is sweet, tart, and with a twist of citrus.

It’s a very light pie, but it is very flavorful, too.

The pie gets its sweetness from the cream cheese and condensed milk.

Its tartness comes from the lime.

The flavor of the citrus also comes from the lime since limes are a type of citrus fruit.

If you’re a fan of a flavor that’s both sweet and tart with a lean towards citrus, you’re sure to love key lime pies.

What Are The Different Types Of Cheesecake? 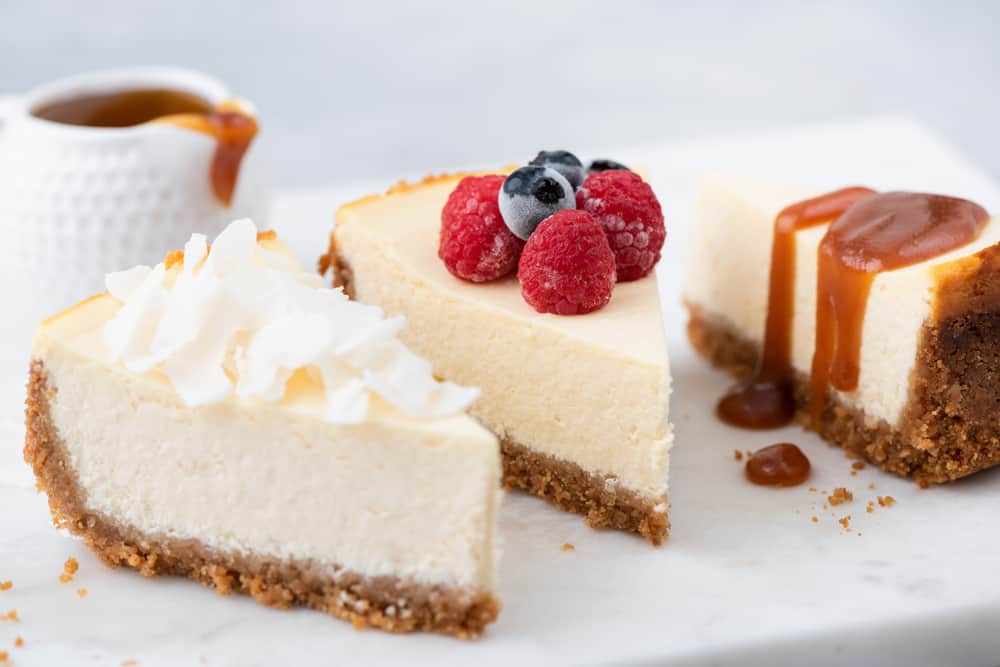 While you may think that one cheesecake is the same as any cheesecake, that isn’t the case.

There are several different types of cheesecakes.

One of the most popular types of cheesecake is the New York Cheesecake.

It’s best known for its smooth and creamy texture.

Cream cheese is one of the primary ingredients, but some bakers will also use heavy cream.

A few also use sour cream.

Another main type of cheesecake is the Philadelphia Cheesecake.

It’s similar to the New York Cheesecake except that the result is usually fluffier.

When you bite into the cheesecake, it feels softer.

A final type of cheesecake is the Chicago Cheesecake.

This one is also quite sweet, but the main difference is that it uses a shortbread crust rather than graham crackers.

The main difference between the two is the crust.

You can follow the recipe above to make your very own key lime pie cheesecake.