You are here: Home / The Cold Spotlight / Is It Weird to Give A Guy Flowers? (Explained) 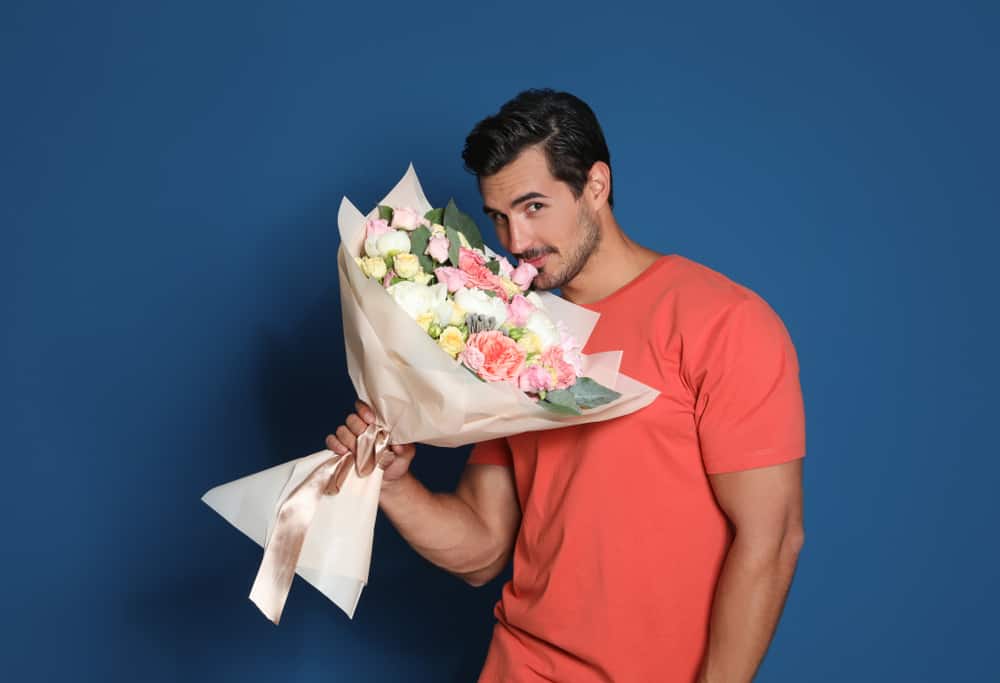 If you have a sweetheart, you may be looking for ideas of what to give to him as a gift.

You may have already given him a watch, some hobby-related items, or even new clothes.

It may be time to think outside of the box.

One of the gifts you may be considering giving to him is flowers.

Is It Weird To Give A Guy Flowers? 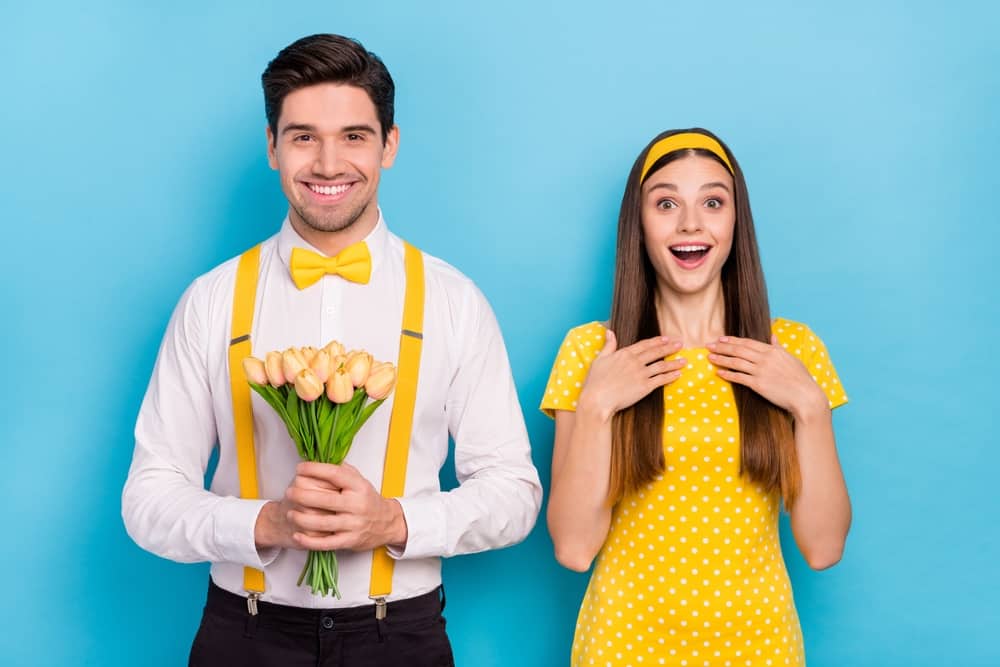 No, it’s not weird to give a guy flowers.

It may seem weird at first since society wants to push the idea that guys only want masculine gifts.

However, flowers can be as masculine as they are feminine.

That’s because there are all sorts of different flowers.

There are delicate, soft flowers with more feminine shades.

Then there are carnivorous or thorned plants that are essentially the punk rock variants of the plant world.

Flowers can make a gift for just about everyone regardless of if they’re a guy or not.

5 Reasons To Give A Guy Flowers 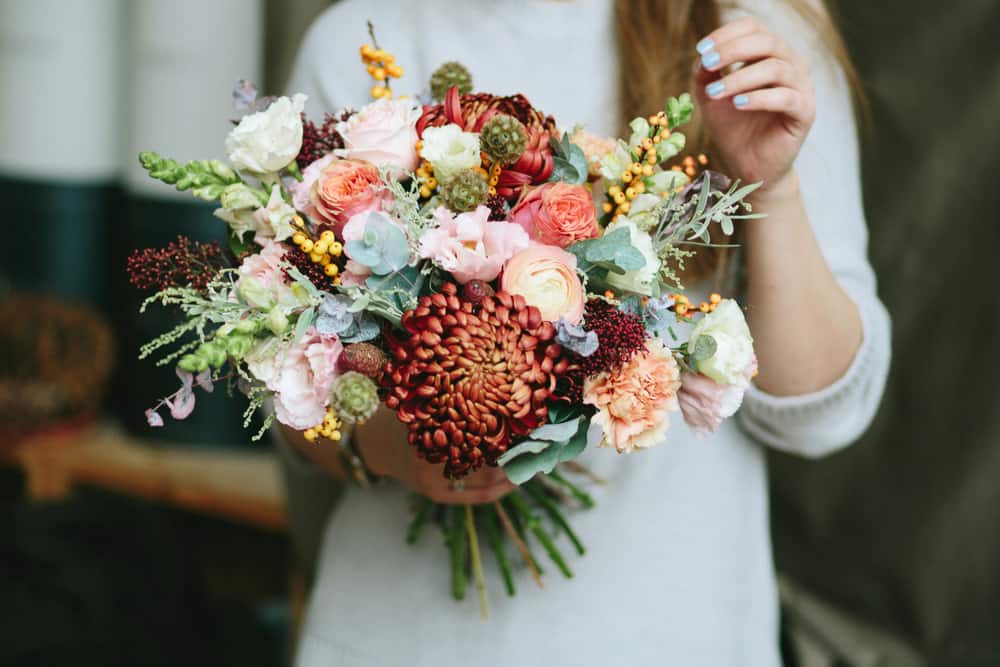 You may still be on the fence as to whether you should give a guy flowers or not.

The last thing you may want to appear as to the guy is weird.

As such, it’s worth considering the different reasons you should give a guy flowers.

Here are five reasons you should give a guy flowers.

1. Shows Him You Care 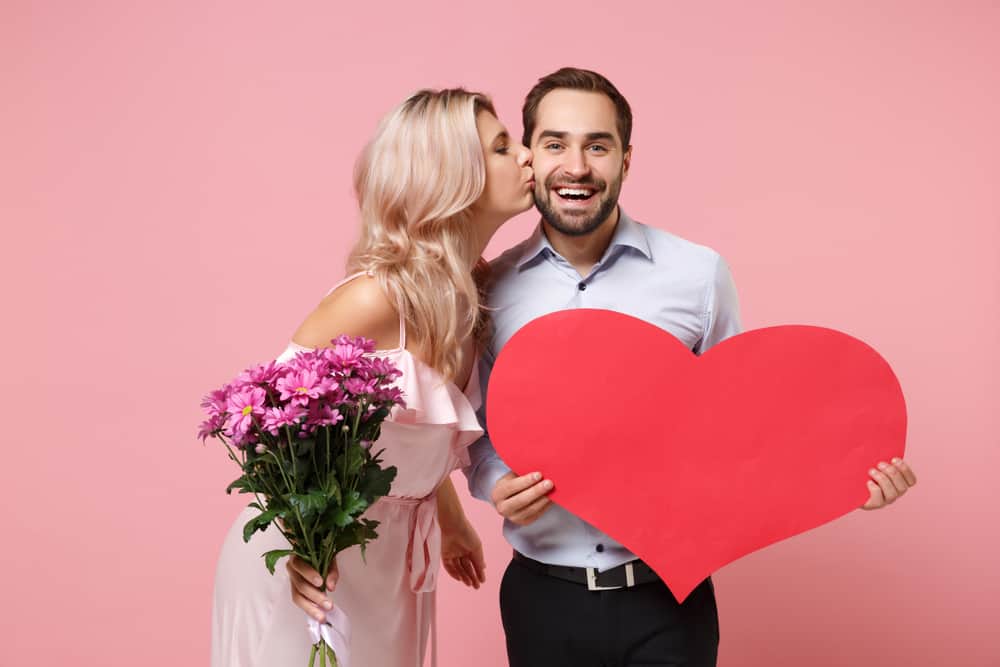 One of the best reasons to give a guy some flowers is that it shows that you care about them.

Flowers are a typical gift to give someone to show that you’re thinking about them.

You had to go out of your way to find a plant that you think they’d enjoy it.

Since you put so much thought into the gift, they’re bound to feel cared for and special.

You might even take some flowers from your own garden.

That can make them feel even more special since it might make them think that you grew those flowers specifically for them.

Guys should feel just as cared for as girls.

Society might try to push a different perspective, but some guys are just as insecure or sensitive as girls.

At the end of the day, it isn’t the flowers that matter.

It’s the emotion behind giving them flowers that matters.

You should give a guy some flowers because it shows them that you care about them. 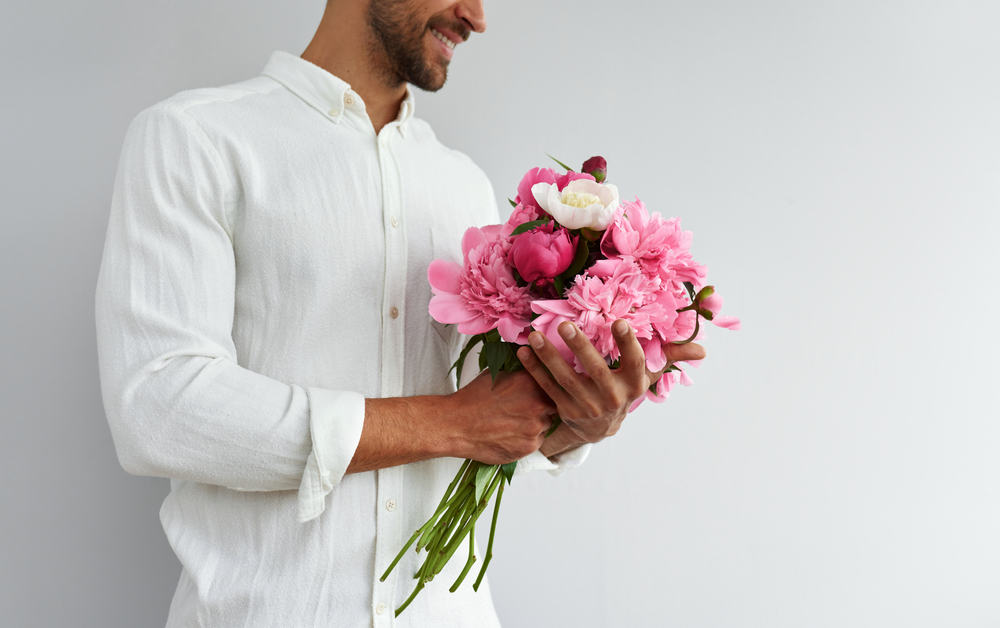 Perhaps another great reason to give a guy flowers is to disrupt gender stereotypes.

The current gender stereotype is that flower gifts typically go to girls.

That’s because flowers are often perceived as feminine or girly.

They shouldn’t have gender stereotypes associated with them.

By giving a guy some flowers, you’re basically disrupting that stereotype.

When it comes to stereotypes, it’s not always a bad thing to disrupt and break down some of them.

By giving a guy flowers, you’re setting a new standard.

It might encourage him to give flowers to some of his male friends, too.

A simple gesture could be another nail in toxic masculinity’s coffin. 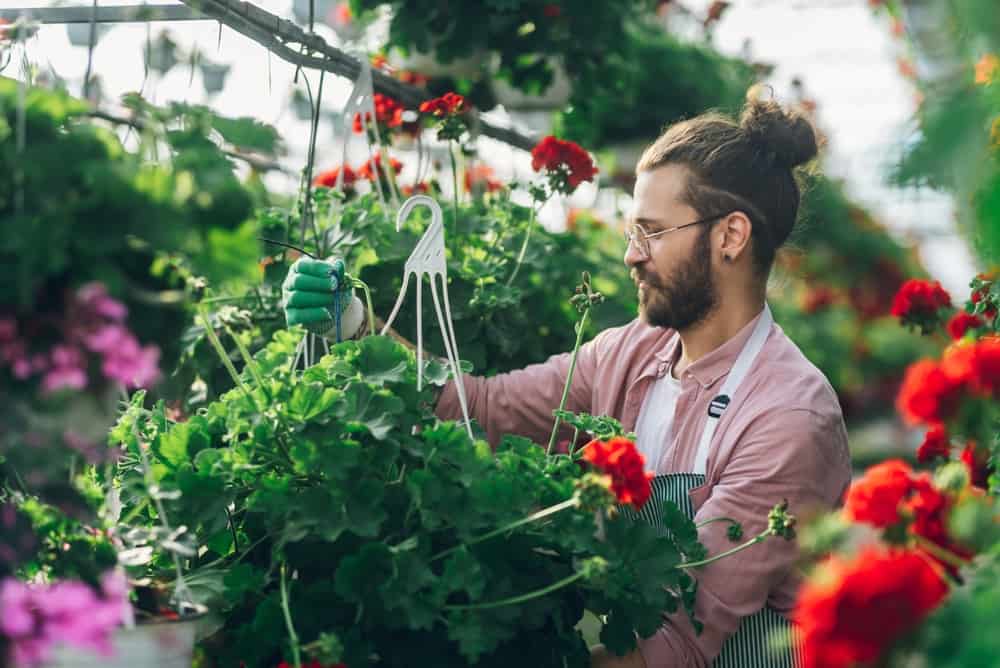 By presenting a guy with flowers, you might also make them realize that they have an interest in gardening.

Perhaps they never gardened before.

If you give them flowers, then they’ll need to take care of them.

They might find that they enjoy the work and process of watering the flowers and ensuring they receive enough sunlight.

They might want to try out gardening as a whole.

The next thing you know, they have a large garden around their home or just outside their apartment filled with different plants.

It even has a few health benefits like exposure to Vitamin D and some cardio exercise.

They might find themselves healthier and happier after starting a garden.

Since flowers and plants can really liven up a place, their home might be all the more beautiful for it, too.

All that began with a simple gift.

You should give a guy some flowers because it could introduce them to the incredible world of gardening.

4. He Happens To Enjoy Flowers 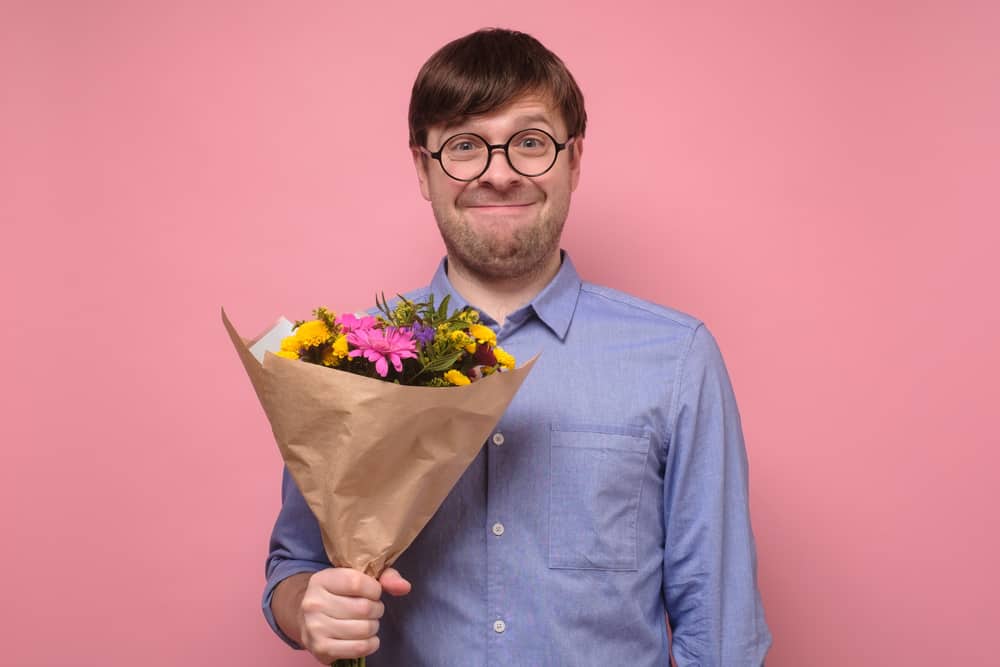 Everyone has different likes and dislikes whether they’re a guy or a girl.

The guy to whom you want to give flowers might just happen to actually love flowers.

They might have a proud green thumb or just appreciate the aesthetics of flowers.

As such, giving them flowers is a no-brainer.

They’re going to love the gift.

Guys who have an interest in botany, the outdoors, or even just beautiful aesthetics are likely going to love receiving flowers.

It goes with their hobbies.

If you know a guy who enjoys flowers, then you should definitely give them more flowers. 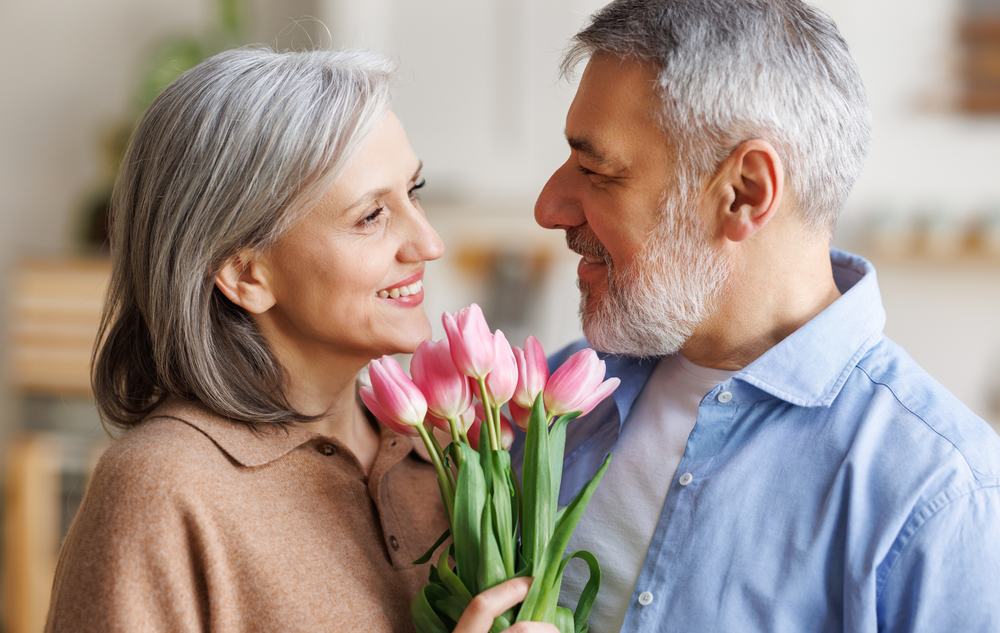 A final reason to give a guy flowers is that you have a romantic interest in him.

Flowers are usually associated with romance.

It’s a romantic gesture to give someone flowers.

While it’s more common for guys to give girls flowers, nothing is stopping you from buying a bouquet and presenting it to your boyfriend or husband.

You might not even have a relationship with them yet.

Giving them flowers can be a way to demonstrate your interest in them.

It’s also a useful indicator to see how they respond when you give them flowers.

If they have a positive response, then you know that they have an open mind.

If they have a negative response, then it might suggest that they have a fragile ego or strong opinions about gender stereotypes.

That might not be something you enjoy or appreciate.

Giving a guy flowers can be a great way to show them you’re romantically interested in them as well as to see how they react to the gift.

3 Reasons You Shouldn’t Give A Guy Flowers 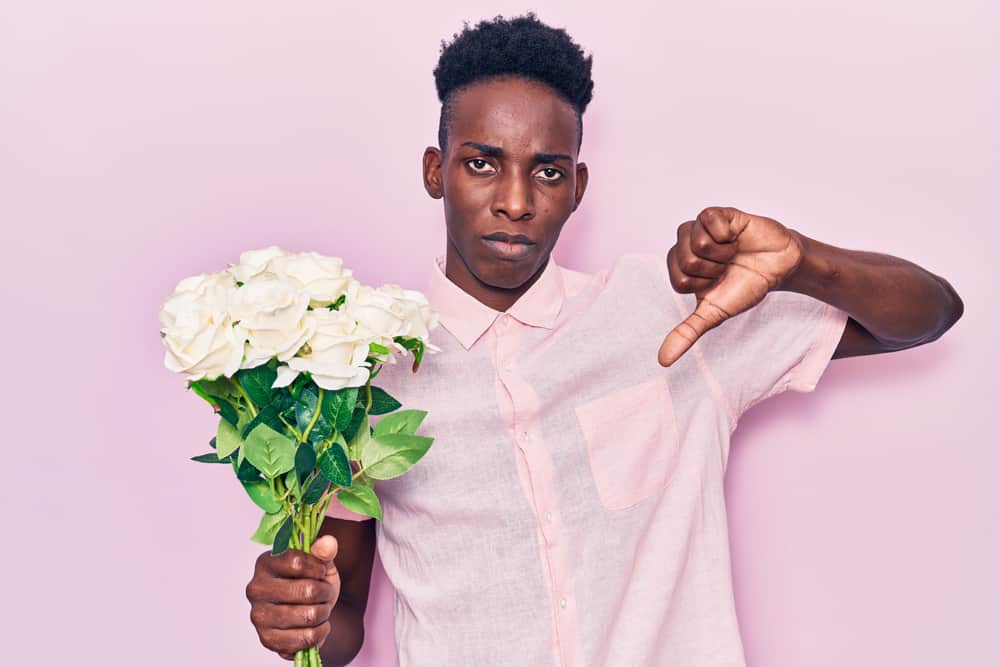 While there are plenty of reasons to give a guy some flowers, there are some situations where giving them flowers might not be a great idea.

To ensure you’re safe and don’t accidentally offend anyone, it’s worth considering why you shouldn’t give a guy flowers.

Here are three reasons you shouldn’t give a guy flowers.

1. He Doesn’t Care For Plants Or Gardening 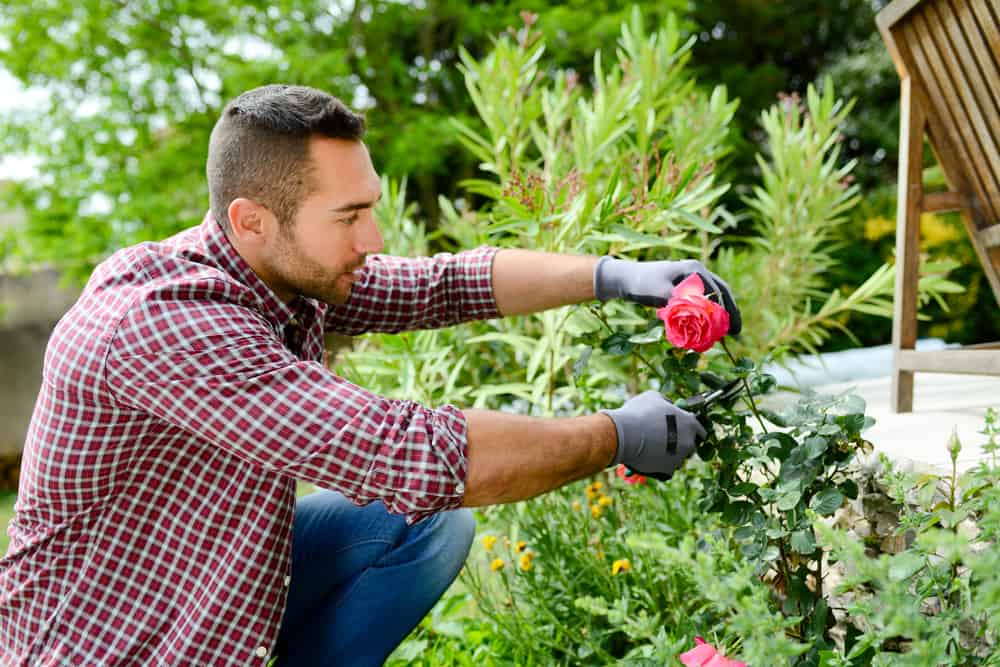 One reason you shouldn’t give a guy flowers is that he’s expressed to you before that he doesn’t really care for plants or gardening.

It just isn’t one of his interests.

If you were to give him flowers anyway, then he might thank you, but there’s a good chance that your flowers are just going to end up in the trash or tossed outside.

It’s like that with any kind of individual who has certain hobbies and dislikes.

If you were to give them something that they genuinely don’t care about, then they’re going to do anything with your gift.

They might be polite and thank you, but the gift doesn’t exactly move them.

They might even think that you’re out of touch with them.

Like any sort of gift, it’s worth first determining if the individual has any sort of interest in the gift.

If they don’t, you might want to find a gift that’s more appropriate for their interests.

You shouldn’t give a guy flowers if he has absolutely no interest in plants or gardening.

2. He Has Fragile Masculinity 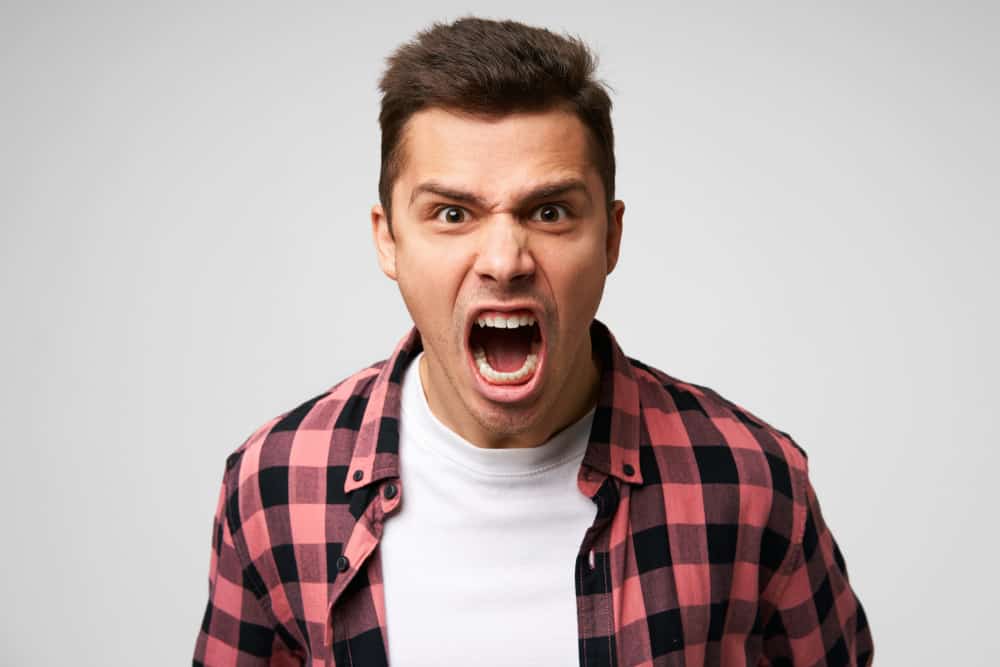 Another reason you shouldn’t give a guy flowers is if he has a fragile grasp of masculinity.

He may be so insecure about his masculinity that giving him flowers could upset him.

He might think that you’re making fun of him and become quite offended.

Such individuals could benefit from therapy, but that’s a decision that they have to make on their own.

You can usually tell if a guy is insecure about their masculinity.

They tend to overcompensate.

They might act more aggressively in certain situations or double down on stereotypical hobbies or interests based on gender.

Since it might endanger you, it’s best not to give flowers to someone who suffers from insecurity. 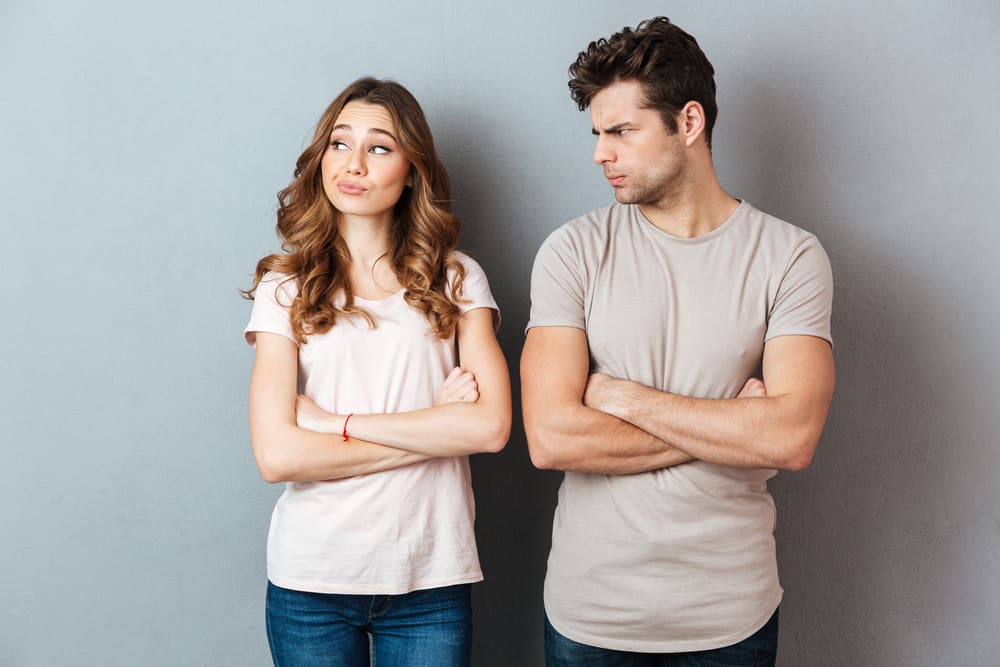 A final reason you shouldn’t give a guy flowers is that you’re not actually interested in them romantically.

The problem with giving someone flowers is that it does have different meanings.

The most common meaning is that you’re attracted to them and want to pursue something romantic with them.

However, giving someone flowers can also just mean that you care about them and you’re thinking about them.

You mean it as a friend and not as a potential romantic partner.

There’s a chance that the guy might think you’re giving them flowers because you want to date them, however.

That might put you in an awkward situation because you might have to turn them down and correct their perception of the gift.

It could completely ruin the gesture of care that you were trying to give to them.

If you think the guy might believe you’re coming onto them, then it might be a good idea to avoid giving them flowers.

For a guy, flowers can be a wonderful gift.

However, there are some situations where giving them flowers could prove to be more of a headache than it’s worth.

Is It Weird to Give A Guy Flowers? (Explained)