You are here: Home / The Cold Spotlight / How Tall Is Woody Harrelson? (His Real Height)

Woody Harrelson was brought into the spotlight during his time on the hit sitcom Cheers, making a name for himself as the naïve country bumpkin, Woody Boyd.

Harrelson is one of the most versatile actors in Hollywood, capable of playing a lovable buffoon or a terrifying killer.

This popular actor was able to ride the wave of success that came from Cheers to expand his career across both television and film.

How Tall Is Woody Harrelson?

Woody Harrelson is 5’9.5” and is the most popular actor of the three Harrelson brothers.

Harrelson was born in Midland, Texas on July 23rd of 1961, and is still known for his strong southern accent, despite having grown up in Lebanon, Ohio.

Woody Harrelson’s love of theater started from an early age and eventually led him to get a degree in both Theater and English Arts from Hanover College.

Following his graduation, Harrelson spent a short time performing in New York before being cast in the role of Woody Boyd on Cheers.

Despite Harrelson winning an Emmy in 1989 for his performance as Boyd, he struggled to get a footing in the world of film until after Cheers ended.

In 1991, Harrelson starred in his first widely-seen film, Doc Hollywood.

As Harrelson has aged, the roles he chooses to take on become more serious in tone, like The Highwaymen from 2019 or The Glass Castle from 2017.

One of Woody Harrelson’s most recent films is Triangle of Sadness, a dramatic comedy starring Charlbi Dean and Harris Dickinson.

Harrelson also starred in the Netflix comedy film The Man from Toronto alongside Kevin Hart.

When Woody Harrelson isn’t filming a new movie or making a guest appearance on popular television shows like The Simpsons, he is an avid supporter of the legalization of marijuana and is an outspoken environmentalist.

Harrelson once climbed the Golden Gate Bridge to put up a sign that read, “Hurwitz. Aren’t ancient redwoods more precious than gold?” as a form of protest in response to CEO Charles Hurwitz’s quote “He who has gold, makes the rules.” 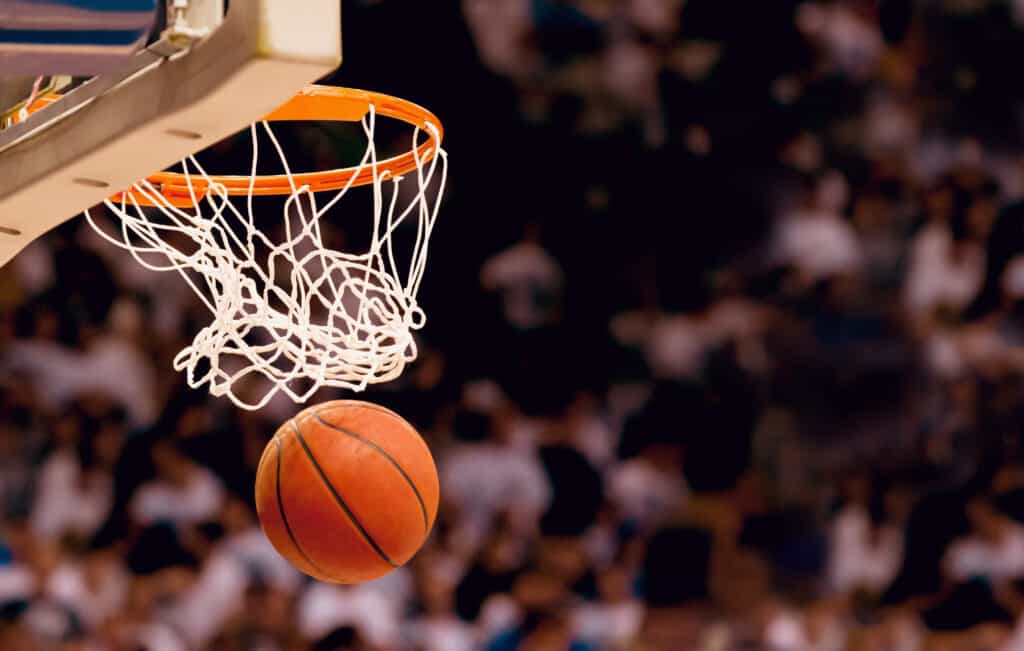 No, Woody Harrelson can’t dunk a basketball in real life despite having seemingly pulled it off in his early hit film, White Men Can’t Jump.

Harrelson appeared in the classic underdog story with five-time All-Star, Marques Johnson, who was more than willing to admit that Harrelson’s famous dunk was achieved through a little movie magic.

Marques Johnson was impressed by how athletic both Wesley Snipes and Woody Harrelson were when he arrived on set, but it was clear that neither of them was a true basketball player.

At first, Snipes couldn’t make a layup and had to work hard to play well enough to film.

Between Harrelson and Snipes, Woody Harrelson was the better basketball player and impressed Johnson with his shooting skills.

Despite his shooting skills, Wesley Snipes doubled down on his belief that the title of the movie was true and even made a bet with Harrelson that he couldn’t do it.

Never one to turn down a bet, Harrelson tried his best to prove Snipes and the movie title wrong like his character.

However, Snipes ended up being right and director Ron Shelton ordered the set crew to lower the net.

Woody Harrelson was firmly against lowering the net, but Shelton reportedly told him that they “didn’t have all night.”

When Harrelson left for his trailer and was out of sight, Shelton lowered the net down to 9.5 feet instead of the full 10 feet without telling Harrelson until years after filming the scene.

All Harrelson knew when he went to film was that he still had a bet to win between Johnson and Snipes, triumphantly slamming the ball through the hoop.

The slam dunk may not have been fully authentic, but the pride on Harrelson’s face was as genuine as could be.

What Band Was Woody Harrelson The Lead Singer For? 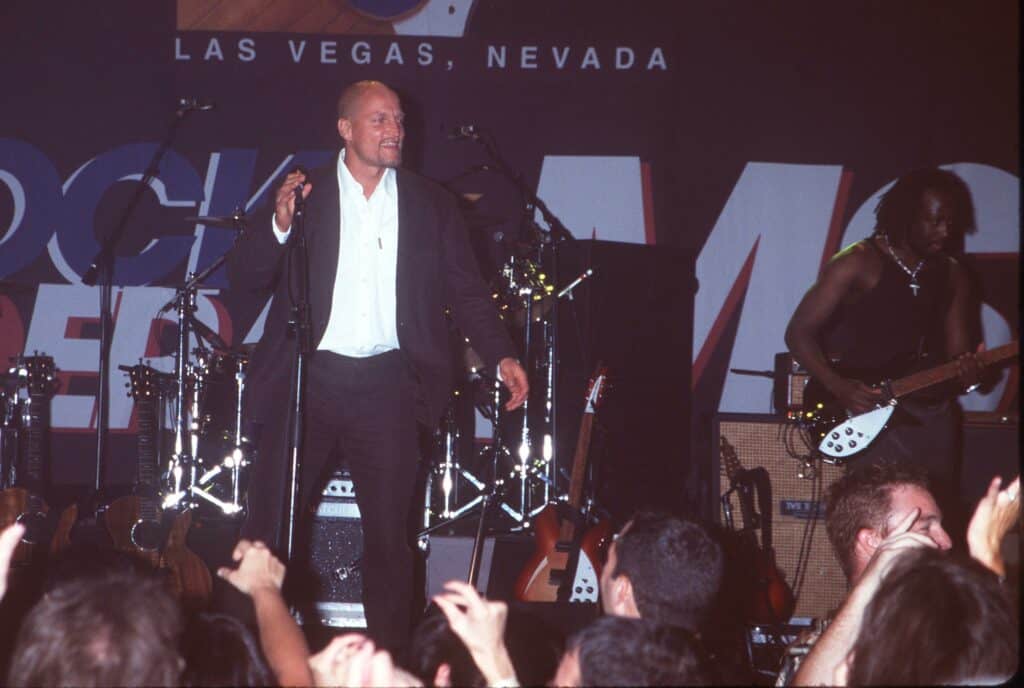 Woody Harrelson was the lead singer for Manly Moondog and the Three Kool Kats, which was his band made up of Los Angeles musicians who wanted to discuss the major problem surrounding them during the early 1990s.

Some of their song topics included the destruction of the Amazon Rainforest, the Persian Gulf War, and the failing state of the American educational system.

When on stage with his band, Harrelson wasn’t the actor people had gotten to know through the 1980s.

His alter ego, Moondog, would take the stage in vibrantly colored outfits and sing about his fear for the state of the world if future generations didn’t do something to change.

After finding that people were heavily opinionated on these topics, Woody Harrelson decided to switch up his act.

When people would show up to one of his shows, they were expecting a comedy show from the name.

Between mixed marketing and the response received from his tour, Manly Moondog and the Three Kool Kats have never performed as a group since.

Did Woody Harrelson Own An Oxygen Bar?

Yes, Woody Harrelson used to own an oxygen bar and yoga center that was located in Los Angeles, California.

Oxygen bars were inspired by the “air stations” that could be found in overcrowded cities like Beijing or Tokyo, where flavored oxygen would be dispensed through cans or gas masks.

These oxygen bars and stations promise to improve energy levels, increase stamina, make you more alert, or even make you more physically desirable.

These early-2000s fad bars of the past could be found in outlet malls all over the country and even started the trend of oxygenated products.

The belief that these types of bars or products would help improve your health was based on the idea that about 21% of the air we breathe is oxygen, and providing the body with pure oxygen to breathe would help the user burn energy and clear their body of waste.

Despite how hot this trend became, medical professionals were quick to disprove the advantages of breathing in pure oxygen as a healthy person.

Shortly after the oxygen bar myths were busted, rumors began to circulate that the higher amounts of oxygen patrons were consuming would rust their lungs.

However, doctors were quick to dispel this myth as well and instead stated that the oxygen level provided by these bars was too gentle to do serious harm.

In the eyes of oxygen bar owners, it was less about the health benefits and more about the lifestyle.

Owners like Lissa Charron saw their oxygen bars in the same way people look at bottled water companies, simply offering their patrons a choice in the type of air they breathe.

To Whom Is Woody Harrelson Married?

Woody Harrelson is married to Laura Louie, whom he met on the set of Cheers when she became his personal assistant.

Harrelson was once married to Nancy Simon, the daughter of legendary playwright, Neil Simon, but their marriage only lasted a year before the pair divorced.

Louie was so good at her job that she convinced the other cast members to get personal assistants as well.

Harrelson originally wanted to keep his relationship with Louie purely professional because he couldn’t admit to himself that he was falling in love with his personal assistant.

After three years of working together, Woody Harrelson decided to write Laura Louie a song as a way to express his emotions and performed it for her privately.

Not only was Louie moved by this romantic gesture, but she had also felt similar romantic feelings six months after working for Harrelson.

After dating for years, the couple decided to tie the knot in 2008 and have three daughters together that Harrelson has referred to as the couple’s “goddess trilogy.”

Their eldest daughter is Deni Harrelson, who was born in 1994.

Zoe appeared in the short film, U2: Song for Someone, in 2015 and led a Ted Talk at her high school after years of being homeschooled.

Woody Harrelson chose to homeschool his children so he wouldn’t have to worry about the quality of their education.

He saw the opportunity to show his daughters the world first-hand as a way to better bond and educate his daughters.

The youngest of the three Harrelson sisters is Makani Harrelson, who was born in 2006.

Harrelson raised his family in Maui, Hawaii, but he recently relocated his family to Austin in his home state of Texas.

How Tall Is Woody Harrelson? (His Real Height)