You are here: Home / The Cold Spotlight / How Tall Is Tom Brady? (His Real Height)

Tom Brady is one of the most famous quarterbacks and players in the history of the National Football League.

Although his life has drastically changed off of the professional football field, Brady continues to play his hardest despite getting ever closer to 50 years old.

While this Tampa Bay quarterback has retired and come out of retirement multiple times, Brady is now more focused on his career in the National Football League than ever.

How Tall Is Tom Brady?

Tom Brady is 6’4” and is a seven-time Super Bowl champion.

Not only does Brady have Super Bowl rings to his name, but he was also named Most Valuable Player in five out of the seven Super Bowls he won.

I always forget how tall Tom Brady is. 😳 https://t.co/pT704cnaaJ

I'm the same height as Ronaldo, Tom Brady's height scared me seeing how tall he is https://t.co/KpvxIK7jx3

Gives you a sense of how tall Tom Brady is. Both supposedly 6’ 4” https://t.co/HIfENG9w1Q

How tall is @tomecurran if Brady is 6'4" and he is looking up like this? No way is Tom E in the back on a chair! pic.twitter.com/7jO7hkWo8d

Brady was born to Galynn and Thomas Brady on August 3rd of 1977 in San Mateo, California, where he would later attend Junipero Serra High School before moving on to the University of Michigan in 1995.

This star quarterback wouldn’t make a name for himself until 1997 when he served as the backup for Brian Griese in the National Championship game which the Michigan Wolverines won 12-0.

Brady shared the role of the Wolverines’ quarterback with Drew Henson from 1998 to 1999, but he was still able to rack up a 20-5 record and a 2-0 record in Bowl games.

By 2000, Tom Brady was drafted into the National Football League by Bill Belichick and the New England Patriots as the 199th player selected overall in that year’s Draft.

Brady served as a backup quarterback during his rookie year behind Drew Bledsoe.

When Bledsoe suffered an injury on the field, Belichick replaced Bledsoe with Brady and changed the history of the New England Patriots forever.

Tom Brady remained with the New England Patriots until the 2020 season when Brady made the sudden switch to the Tampa Bay Buccaneers.

Is Tom Brady The Oldest In The National Football League?

Yes, Tom Brady is the oldest active player in the National Football League at 45 years of age as of the 2022–2023 season.

The oldest player in the National Football League’s entire history was George Blanda, who was a quarterback and placekicker who retired in 1976 at 48 years old after having played 26 seasons in the professional league.

According to Statista, the average career in the National Football League is only 3.3 years across all types of players and only increases to 4.44 years for quarterbacks.

Brady has been playing for 23 seasons and would have to play until he’s 49 years old to beat Blanda’s record.

Like many other older athletes, Brady hopes to show both fans and league officials that older players are just as valuable as the young talent they bring in every year.

There are only a handful of active professional football players who are 40 years old or older at this time, including James Peters, punter Andy Lee, kicker Robbie Gould, and punter Dustin Colquitt.

As these players age, they prove why teams shouldn’t dump a player solely due to increasing age.

James Peters may be best known for playing alongside the Philadelphia Eagles, he is currently playing for the Dallas Cowboys.

Why Did Tom Brady And Gisele Bundchen Get Divorced?

Tom Brady and Gisele Bundchen came to the difficult decision to divorce after 13 years of marriage because Bundchen felt that Brady was unable to properly balance his life as a professional quarterback and as a family man.

There were rumors of the celebrity couple’s troubled relationship for months before Brady and Bundchen’s official divorce announcement and the finalization of their divorce on October 28th of 2022.

In their individual divorce announcements, each expressed their gratitude for the time and children that they shared.

Two years before their divorce, in 2020, Tom Brady admitted on Howard Stern’s Sirius XM show that his lack of attention for his family during football season was causing problems in his marriage.

Brady knew that his wife didn’t appreciate that, even in the off-season, he seemed too busy either training or making business deals to be an active participant in the household.

Problems in his marriage became even worse when the quarterback said that “the only time” he could find peace was on the football field.

While he did later note that football and family were major contributors to his finding peace, his wife didn’t appreciate his wording.

Tom Brady wasn’t the only one to publicly discuss problems within his marriage and home life.

Gisele Bundchen did multiple interviews on how having a seven-time Super Bowl champion husband can be stressful.

According to an interview that Bundchen did with ELLE when she was the cover model for the magazine, Gisele had done her part as a wife and mother.

It was a struggle to have to move around the country with her children, but she did whatever it took to support her husband’s career.

Both parties have since moved on from one another, with both Brady and Bundchen finding new partners.

Is Tom Brady Going Back To The New England Patriots?

No, Tom Brady hasn’t publicly said anything about returning to the New England Patriots, but multiple close sources claim fans of the legendary quarterback shouldn’t be shocked if he does make the move.

Rumors about Brady returning to the Buccaneers started up shortly after The Athletic’s Jeff Howe brought up the idea of Brady and former coach Bill Belichick coming together again for the historical reunion.

This theory has been heavily debated from both the perspectives of Howe being right and Howe being completely wrong, but Brady himself hasn’t said a word.

One of the first close sources of Tom Brady’s to speak out about the topic was former teammate Matt Light when he was a guest on the Boston-based radio interview series The Greg Hill Show.

Matt Light worked with Brady for 11 years as his left tackle, and the duo remains close friends to this day.

Light claimed that fans shouldn’t “put anything past him” because Brady “wants to win, and he knows how to do it.”

At this time, the Patriots are not looking to add a new quarterback to their team because they have Mac Jones, and the Patriots believe that this young athlete will lead the team into the next great era following the Brady era.

Even if the New England Patriots didn’t have Jones, it’s still unlikely that the Patriots would have the cap space to support a player like Brady.

Most football fans are expecting Brady to retire for real or trade to a brand new team before ever returning home to his original team or Bill Belichick.

What Kind Of Major League Does Tom Brady Own? 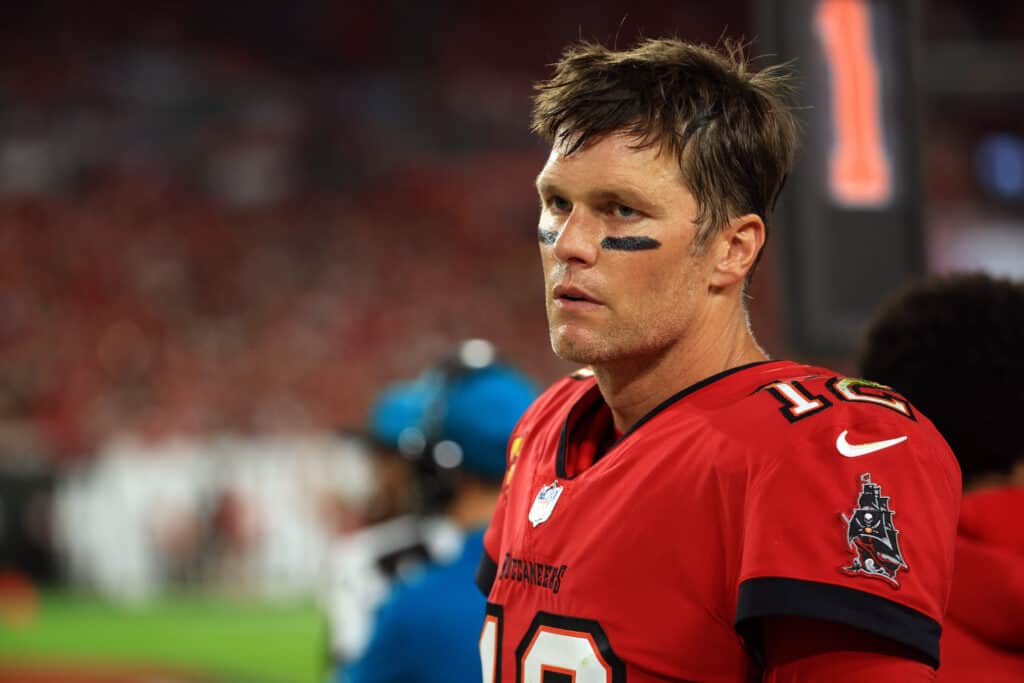 Tom Brady is now a part-owner of Major League Pickleball and has brought an expansion team for the 2023 professional pickleball season.

Major League Pickleball founder Steve Kuhn has been incredibly pleased with the attention brought to the new league with champions of their respective fields like Brady, Kim Clijsters, LeBron James, Draymond Green, and Kevin Love.

Since these all-stars have joined the ownership team for Major League Pickleball, the league has been able to expand from 12 teams to 16 teams.

In recent years, pickleball has increased in popularity among younger people, and Kuhn is looking to bring even more players to the sport.

The initial increase in pickleball players was inspired by the 2020 Covid-19 pandemic, where pickleball was one of the few Covid-safe sports to play.

Steve Kuhn has an initiative that he calls “40 by 30,” where he hopes to expand the sport to have 40 million pickleball players by 2030.

To win a pickleball match, an opponent must reach 11 points with a two-point cushion in a similar fashion to other racket-based games like tennis or badminton.

Pickleball courts are 20 feet by 44 feet, making them approximately the same size as a badminton court.

Like badminton, pickleball can be played in singles or doubles.

With the creation of a professional league, more colleges and high schools may attempt to grow their own pickleball leagues.

What was once seen as an activity for retired people is quickly becoming a popular game among young people.

With the pickleball scene still in its early stages, only time will tell if it becomes a great American pastime.

Does Tom Brady Own A Restaurant?

No, superstar quarterback Tom Brady doesn’t own a restaurant, but there is another man named Tom Brady Jr. who owns a restaurant in Ann Arbor, Michigan called Jim Brady.

With the talent of executive chef Ian Hockenberger, businessman Brady has combined a fun 1950s atmosphere with Michigan-themed fine dining.

The mixup between Tampa Bay Buccaneers’ Tom Brady and the restaurateur of the same name has caused some slight business problems for the Jim Brady franchise.

Like many modern business owners, Brady Jr. relied on Facebook to bring in customers who may not normally know they exist.

When Brady Jr. first got the notification that he had been flagged for impersonation, the 54-year-old business owner was frustrated because he had been named Tom Brady longer than the football player.

In an attempt to get his account back, Tom Brady Jr. sent Facebook whatever information they asked for and was still denied an appeal.

The Brady family has owned the Jim Brady restaurants for three generations, going back to 1954.

Although the restaurateurs and the celebrity quarterback share the same name, there is no relation between the families.

The Tampa Bay Buccaneers quarterback may not own any restaurants, but he is known for having an incredibly strict diet and has all of his home meals prepared by a personal chef named Allen Campbell.

Roughly 80% of all the foods that Tom Brady consumes are organic vegetables and whole grains, such as beans, quinoa, or millet.

When Brady does eat meat, he prefers grass-fed steak, wild salmon, duck, and the occasional serving of chicken.