You are here: Home / The Cold Spotlight / How Tall Is Steph Curry? (His Real Height)

Steph Curry is one of the most talked about active players in the National Basketball Association, with many fans partially pinning the Golden State Warriors’ recent string of successes on the popular point guard.

While some professional basketball fans may have their qualms with Curry, there’s no denying that Curry has been able to continually evolve as an athlete.

How Tall Is Steph Curry?

Steph Curry is 6’2” and serves as the point guard for the Golden State Warriors, with many fans seeing Curry as the face of the NBA.

Stephen Curry is one of 18 different players in NBA history to record at least 40p/10r in a Finals game.

With a listed height of 6 feet 2 inches, he's the shortest player to do so.

And at 34 years old, he's the second-oldest player to do so, trailing only LeBron James (35). https://t.co/wmYh6EIV3P

Same Height, pretty equal athleticism/strength. Yet Curry is clearly better. Why is that? Skill.

Stephen Curry is the Greatest and most Skilled Point Guard of all time. https://t.co/FEsTApxynE

Stephen Curry is the 10th player in NBA history to win multiple MVP Awards and a Finals MVP Award.

He joins Michael Jordan and Magic Johnson as the only guards to do so.

With a listed height of 6 feet 2 inches, he's the shortest player to do so by four inches. pic.twitter.com/dpGnUqsdcn

Steph Curry is a second-generation National Basketball Association player, with his father, Dell Curry, having played for the Charlotte Hornets in North Carolina.

Curry was born in 1988 to his basketball-playing father and his educator mother.

With his father having spent 15 years in the National Basketball Association and his mother being a standout volley player at Virginia Tech, athleticism was in young Steph Curry’s blood.

Even after Dell Curry retired, he remains a broadcaster for the Charlotte Hornets to this day.

Following high school, Curry attended Davidson College and was a major player for their team.

Across the three seasons Curry played for Davidson, he appeared in 104 games with an average of 25.3 points, 4.5 rebounds, and 3.7 assists.

Since making his professional debut in 2009, Curry is recognized as one of the best shooters in the National Basketball Association.

In 2013, Curry broke the single-season record for three-pointers with 272.

Curry would quickly go on to break his own record two years later with 286 three-pointers, only to set a new record in 2016 with 402 three-pointers.

The player to have scored more three-pointers than Steph Curry is Hall-of-Famer Ray Allen.

Does Steph Curry Have A Brother?

Yes, Steph Curry has a younger brother named Seth Curry who plays for the Brooklyn Nets.

As the brother of a superstar point guard, son of Charlotte Hornets icon Dell Curry, and the son-in-law of Doc Rivers, Seth Curry has a lot of influential athletes in his family.

After attending Duke University, the younger Curry tried his best to follow in the footsteps of his brother and father only to go undrafted in 2013.

Rather than letting his younger brother’s dream die, Steph Curry had the Golden State Warriors sign Seth Curry to a non-guaranteed contract.

While the younger Curry brother was on The Draymond Green Show, Curry acknowledged how his older brother’s influence helped get him through the door of the National Basketball Association.

Although Steph Curry could get his brother into the professional league, it was up to Seth Curry to prove that he deserved to be there.

The Curry brothers would go on to play six games together before the Warriors decided to waive Seth Curry.

Following his release from the Warriors, Seth Curry bounced around the National Basketball Association and the G League.

It would take Seth Curry nine seasons before he was truly ready for the professional league, with even Curry acknowledging how much incrementally better he got with each year of experience.

Since joining the Brooklyn Nets, Curry has reached new heights in his career and is finally able to show off his shooting skills like his older brother.

Although there is a lot of pressure on Seth Curry to reach the same heights as his father and brother, Curry uses the constant comparison to help shape who he will become as a player and a teammate.

His main focus at this time is helping improve the state of the Brooklyn Nets with Kevin Durant.

Yes, Steph Curry has been married to Ayesha Curry since July 30th of 2011 after having known each other for nearly a decade.

This celebrity couple first met while attending the same church when they were only 14 and 15 years old.

Young Steph Curry was the boy all the other girls at church had a crush on, and Ayesha didn’t feel that she even had a chance with him.

In 2008, Ayesha Curry moved from Charlotte, North Carolina to Los Angeles, California to pursue her career in modeling and acting.

Although her parents had a strict “no athletes” rule when it came to Ayesha dating, the pair casually reconnected and began dating when they were 18 and 19 years old.

Steph Curry was able to charm his future wife with his silly nature.

The couple had their first kiss in Ayesha Curry’s parents’ driveway, which would later be the exact spot where Steph Curry proposed in July 2010.

To make it a surprise, the families pretended to host a cookout and instead were able to watch the proposal from inside the house.

When the couple got married in 2011, their wedding ceremony at Ballantyne Resort was attended by nearly 400 loved ones.

Three years later, on July 10th, the couple expanded their family by one with their daughter, Ryan Carson Curry.

Their third child, Canon W. Jack Curry broke their trend of having daughters and even came earlier than the couple was expecting.

After 10 years of marriage, Ayesha and Steph Curry decided to renew their vows as a family of five.

Riley officiated their ceremony while Ryan and Canon escorted their mother through the family’s backyard.

Does Steph Curry Own Under Armour? 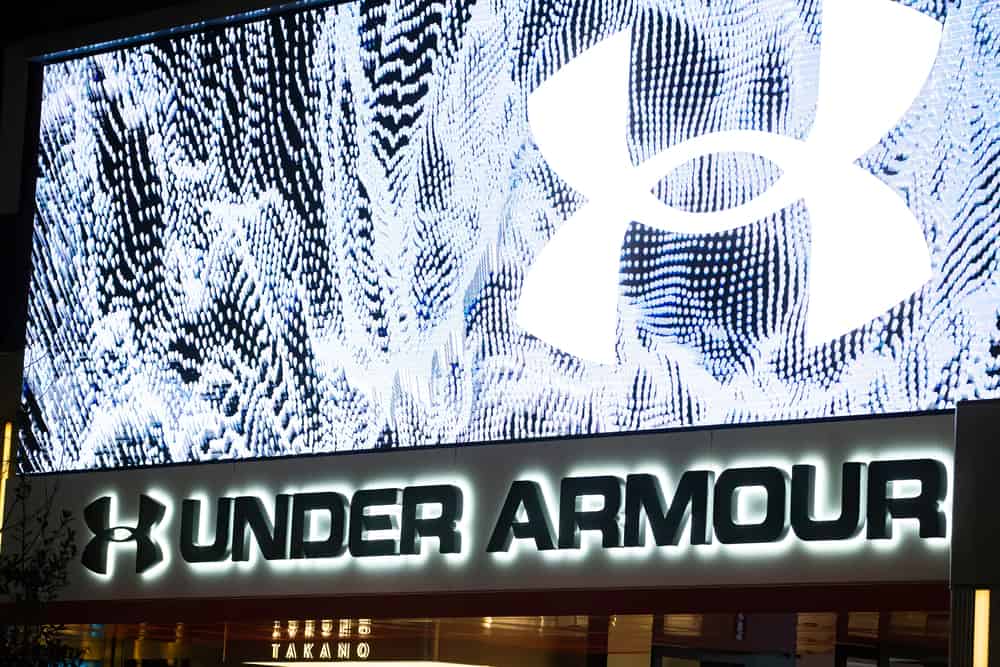 No, Steph Curry owns a subsidiary of Under Armour called Curry Brand and works as a spokesperson for both brands.

Although Steph Curry may not own Under Armour, he and the brand have penned a lifelong contract that is reportedly worth $1 billion.

Similar to Michael Jordan, Curry is hoping to use his successful career in the National Basketball Association to bring awareness to his clothing brand.

Not only is Steph Curry willing to be the face of the Curry Brand, but he also plays an active role as CEO.

Curry’s relationship with Under Armour started when he was just an endorser and this relationship has evolved into an entire business.

Even while on the professional court, fans can spot Curry sporting one of his shoes.

One of Curry’s most iconic pairs of shoes includes his “Lucky Lilac” Curry 4 FloTro, but Curry is known for frequently changing shoes mid-game.

By creating his own shoe brand, Steph Curry is able to ensure that his shoes are exactly what he needs on the court.

Similar to how the Jordan Brand has become a major part of Michael Jordan’s legacy, Curry hopes that his Curry Brand will be something that continually grows in popularity with both basketball fans and fellow players well after he retires.

Not only is this Golden State Warriors star looking to make a name for himself in the clothing industry, but he also frequently uses the Curry Brand to collaborate and highlight other African-American-owned companies.

Even if the Curry Brand doesn’t work out for the point guard, Curry still has a lifetime contract that is “potentially worth more than $1 billion,” according to Rolling Stone.

Like Michael Jordan, Under Armour is expecting Steph Curry to remain popular long after he retires and wants to lock him in ahead of time.

What Do Steph Curry’s Tattoos Say?

Steph Curry’s tattoos are different biblical references that are written in Hebrew, inspired by Curry’s deep passion for his faith.

On his right wrist, Curry has a line from First Corinthians 13:8 that says “Love never fails…”

Curry dedicated his wrist tattoo to his wife Ayesha Curry, who has an identical tattoo on her right wrist.

This double-meaning tattoo is both a reference to the love that Curry has for God and the love he has for his wife, proving once again how deeply entwined the two types of love are for Curry.

On Curry’s left wrist, he has “TCC 30,” which is a reference to both Curry’s jersey number and the most important aspects of how he lives his life.

Steph Curry has the symbols “><” on his inner left bicep which refers to John 3:30, which states “He must become greater; I must become less.”

On Curry’s inner right bicep, he has the word “Woe” written out.

Curry shares both of these bicep tattoos with his wife Ayesha Curry, who has the same tattoos in the same location.

The couple also shares identical calf tattoos for their three children, which include the 3-D outlines of a Wolf for Canon, a Butterfly for Ryan, and a Unicorn for Riley.

The final tattoo that Steph Curry currently has is the letter “A” on his ring finger for his wife Ayesha.

By having a tattoo for each of his family members, Curry can feel like he has a small part of his family with him wherever he goes.

While Curry isn’t the most tatted-up player in the National Basketball Association, he puts a lot of thought and passion into the tattoos he does get.

Is Steph Curry An Author?

Yes, Steph Curry is a children’s book author and released his first book, I Have a Superpower, in the fall of 2022.

As a father, Curry was excited to publish a book that parents could read to their children before bed to inspire them toward greatness.

The moral of I Have a Superpower is to help children understand that they don’t need to be the strongest or the best at something to make a big impact in the lives of others.

He wants to help future generations understand that achieving their dreams takes a lot of hard work and dedication.

Steph Curry was inspired to add “author” to his resume by his children’s love of reading and hoped to create a book they’d love reading before bedtime.

I Have a Superpower was published by Unanimous Media and Penguin Kids.

This story is best recommended for children between the ages of four and seven years old and features colorful art by Geneva Bowers.

Shortly after the book was released, Unanimous Media co-founder Eric Peyton announced that there would be another book coming from Curry and that I Have a Superpower would see a multilingual release.