You are here: Home / Cold Hard Facts / How Often Do Beekeepers Get Stung? (Everything To Know) 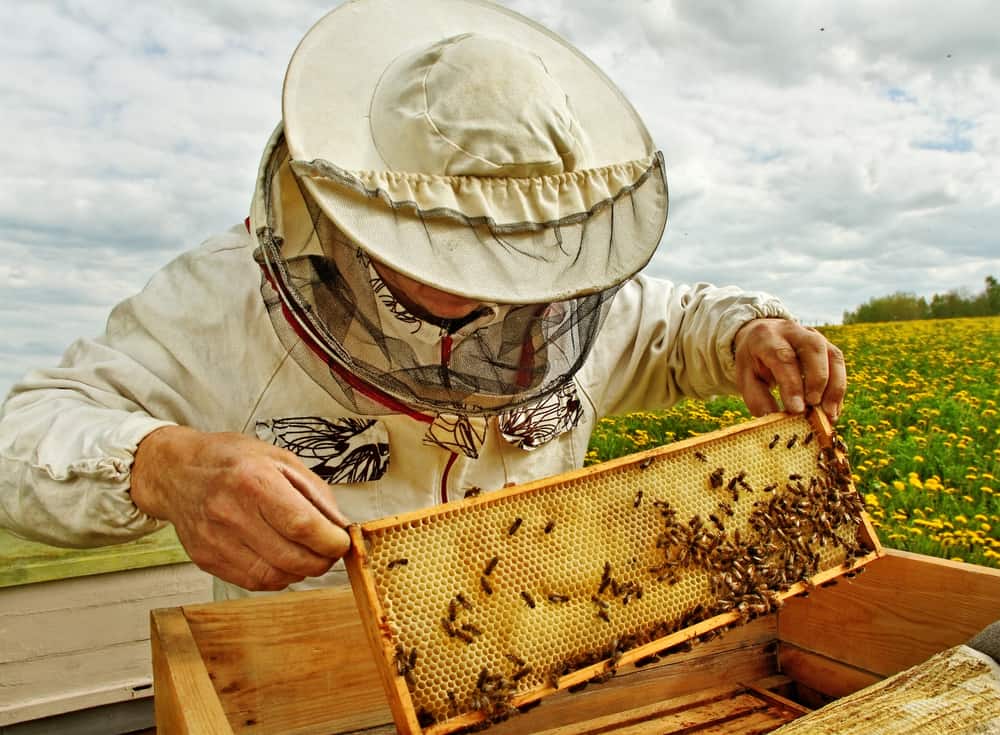 Beekeeping can be a rewarding job.

You’re self-employed, and you get to learn a lot about nature by interacting with it one-on-one.

Bees are only really interested in getting the job of making honey and pollination done.

Without bees, we will not have food crops and many other things we need to survive as a species.

Do beekeepers get stung a lot?

How Often Do Beekeepers Get Stung? 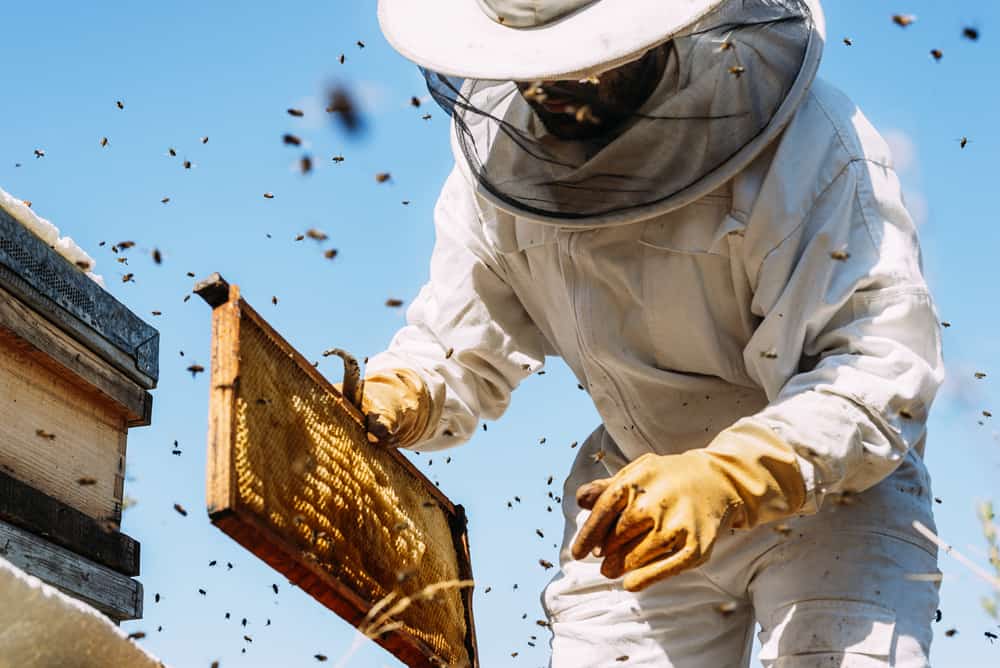 Beekeepers only get stung a few times in a solid year.

There’s a good reason for that.

First, the bees are not there to sting.

Many people misunderstand the motives of these beautiful little winged creatures.

Most of their importance goes unnoticed because they have a stinger, and it hurts enough from one bee.

You can imagine the pain from multiple stings!

However, the truth is that they’re small and vulnerable, and because their job is so important, they have to have a defense.

The beekeeper will have to develop a tolerance to stings.

Professional beekeepers will tell you that it hurts a lot the first few times.

Over time, the pain isn’t as bad.

The one tip for newbie beekeepers is to keep an epi-pen on hand in case there is a bee allergy.

Even if you think you aren’t allergic to bees because you’ve been stung before, it’s important to know two things.

One, your body chemistry changes over time, and your hormones do as well.

New allergies can develop, even to a favorite food.

It’s the same for insect stings and bites.

The other point is there could be a swarm attack for some reason.

It’s rare, but it can happen and stings from multiple bees can cause a reaction where just one bee’s sting wouldn’t.

What most people don’t know is that the bee has to preserve that stinger.

Once a bee stings, it can’t grow that defense method back.

Honeybees will not be able to remove the stinger from you.

When they pull away, the bee leaves behind its abdomen and all that is in it.

It will then die.

The trauma is not one it can recover from.

Another reason a honeybee may sting is that a rogue swarm of wasps is attacking it.

They both have stingers, but they aren’t best friends.

If you block their food access or swat them as well as make any nervous or fast movements at the hive, they may sting.

Does it really protect the bee?

No, but the trauma to the perceived attacker will do two things.

It could possibly run off other attackers, and for sure, it will alert the other bees to hightail it out of there.

Nature has some fantastic defenses.

It also has a great way of working in the circle of life to encourage things to grow.

This is why there’s such a hyped campaign to save the bees around the world.

This is part of the reason beekeeping is such a hot profession right now.

Why Are Bees In Danger Of Extinction? 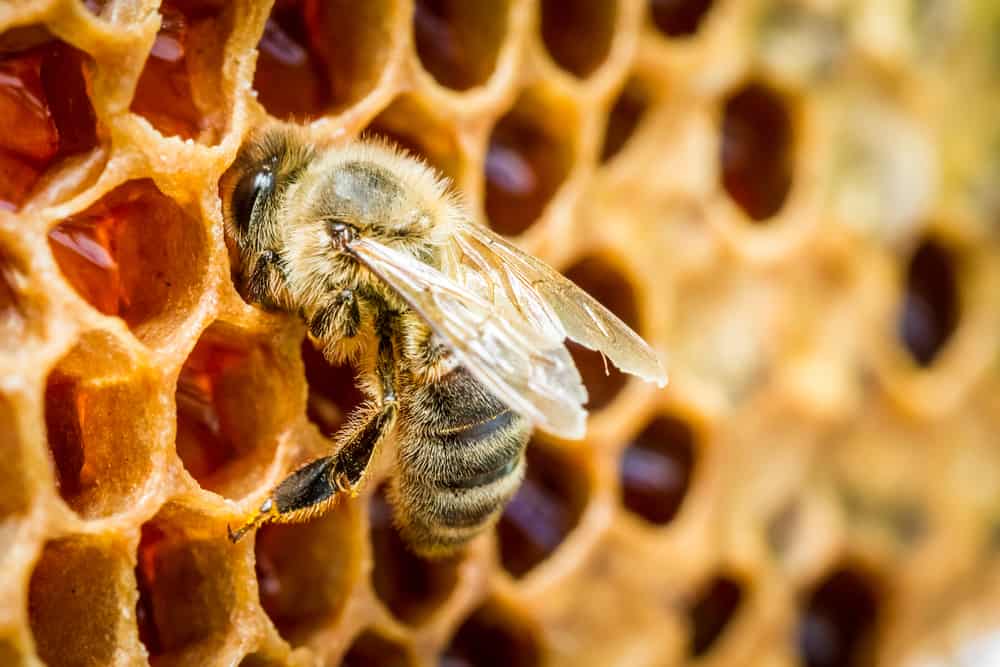 There are numerous reasons the bee population has dropped 38%.

That’s too close to half to be comforting.

First, nature has a rhythm, and the bees, like many other creatures on the planet, have a specific time they eat, pollinate, mate, procreate, and travel to do these things.

When the climate is messed up, that rhythm goes off.

They come too late or too early to pollinate because some flowers are blooming too early, too late, or not at all.

The second reason, which is related to the first, is they are confused due to the non-organic engineering of crops.

Anything we do to our food sources affects the animals.

Bees are delicate in nature.

They can’t adapt to climate changes easily, and they don’t migrate north as much anymore.

Their habitats are also being destroyed in order for people to move in.

They have had some luck lately, though.

There are laws that govern the bee extermination process.

In many places, if you have a hive on your property, you can’t exterminate them.

That includes cars or any other property.

You must call the Department of Agriculture and or your local authorities to get the right people to relocate the beehive with minimal damage to the property and the bees.

How Do I Prevent Getting Stung By A Bee If I’m A Beekeeper? 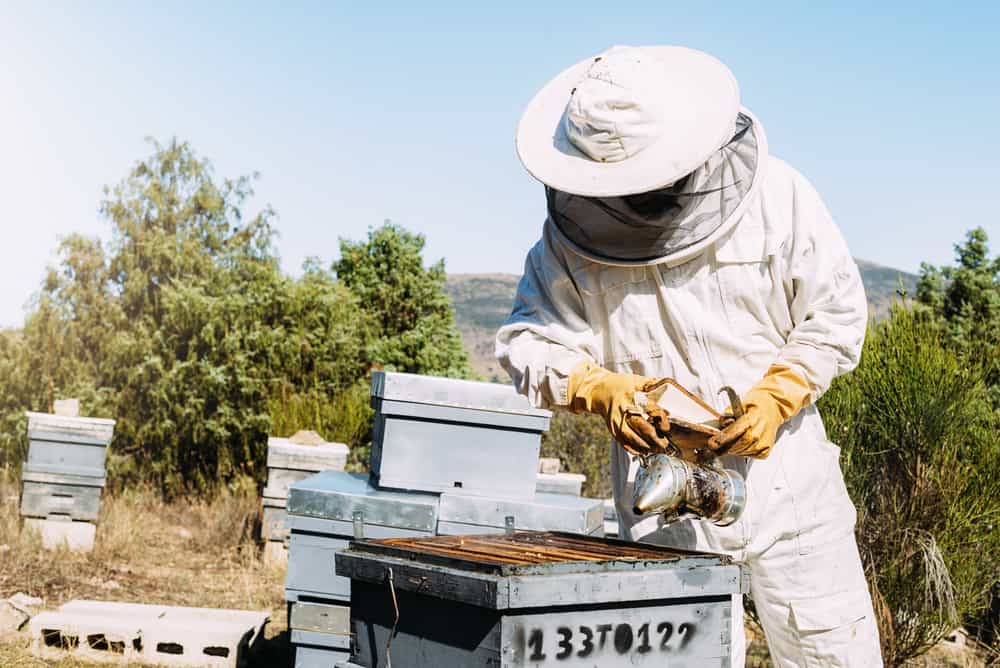 Taking precautions to prevent getting stung is a smart move.

There are several things you can do as a beekeeper to make sure you have done all you can to prevent stings, at least at any regular pace.

What Do I Do If I Get Stung As A Beekeeper? 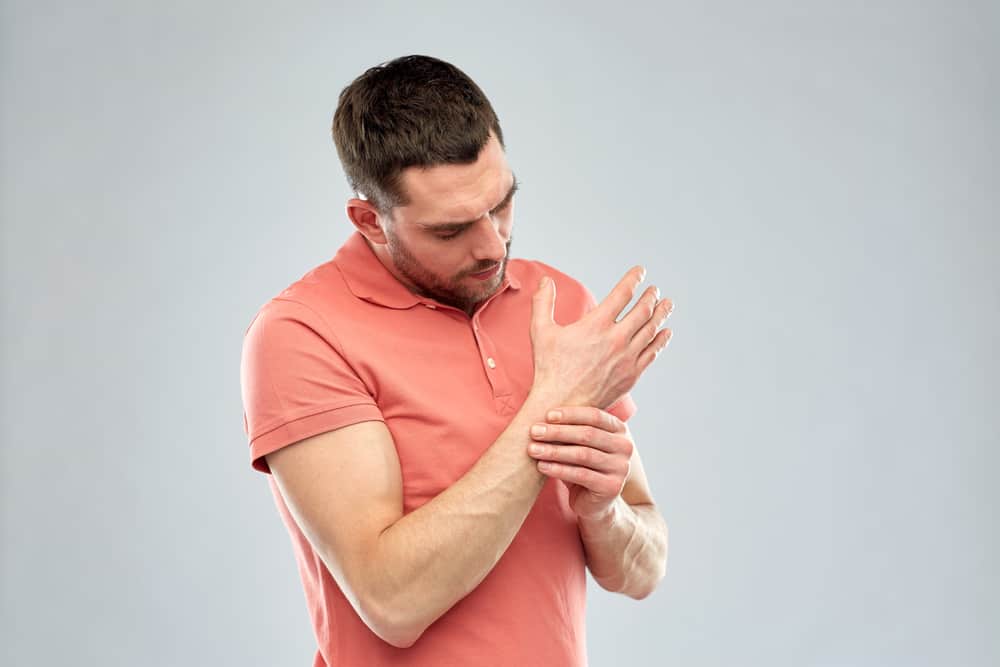 If you are allergic, you don’t know if you are, or you are a newbie beekeeper, keep an EpiPen with you at all times, and use it as directed immediately upon getting stung, even before you remove the stinger.

If you don’t know how to use an EpiPen the right way, ask the pharmacy you get it from, and Google it to be sure.

Look for any tips before you ever approach a hive.

Next, use a sterile knife or something that is flat and has an edge.

It’s been suggested that your credit/debit card works well.

Never use fingers or anything that will squeeze like tweezers because there is a venom sack attached to the stinger.

You can prevent the venom from entering your bloodstream by removing the stinger without squeezing.

Do Experienced Beekeepers Still Get Stung? 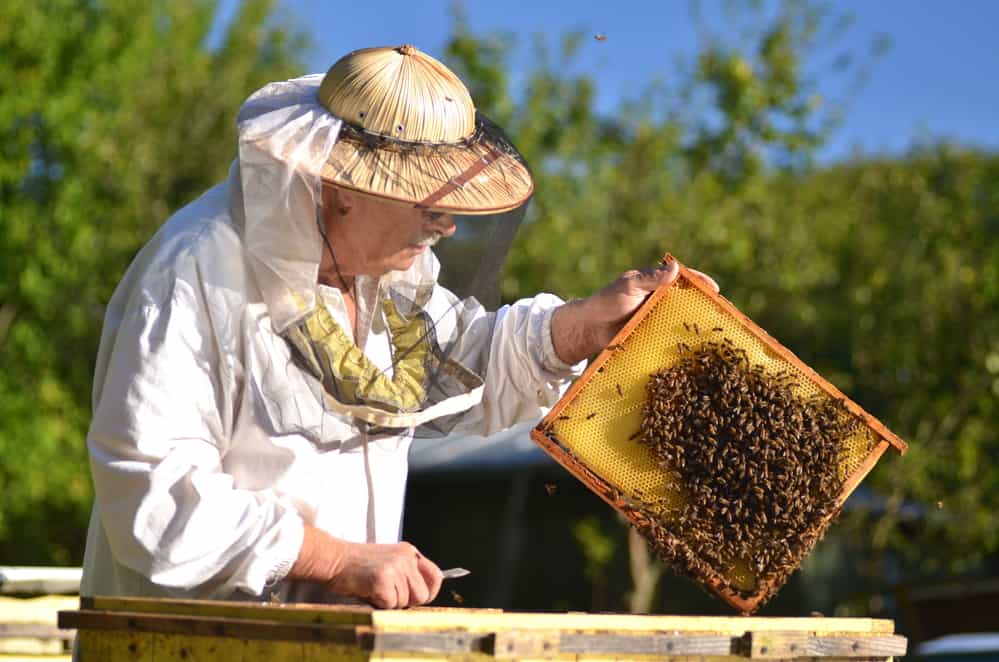 The short answer is yes, with one caveat.

The ones who have worked with one hive for years and years are used to the way those bees act.

They know how to behave with those bees, and the bees are far less likely to attack the beekeeper because they can anticipate when that may happen. 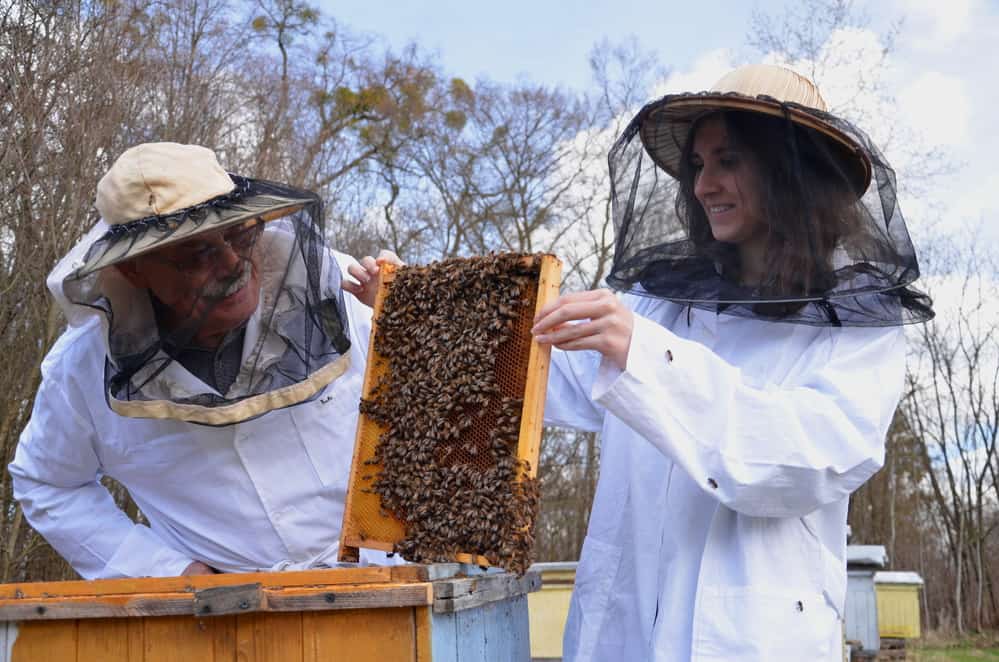 Becoming a beekeeper is a commitment that is not to be taken lightly.

After all, you will be in charge of living creatures.

There is a process to becoming a beekeeper, and those doing it can consider it both an honor and a privilege to serve the planet in this way.

As a beekeeper, you could work for a commercial farm or privately and sell the byproducts of the bees.

That would consist of wax, honey, and Royal Jelly.

The work gets a bit harder working for a commercial farm because you are responsible for keeping that beehive healthy and productive, as you would with your own, but you also have to keep it profitable.

Some work in research only.

That means they won’t be concerned with the commercialization of the bee byproduct.

They move hives to different environments and attempt to understand the effects a change in climate will have on the bees.

This helps them prevent or find solutions to some of the dangers the bees face like Hive Collapse Syndrome and various parasitic conditions that also render hives extinct.

Average Salary Of A Beekeeper 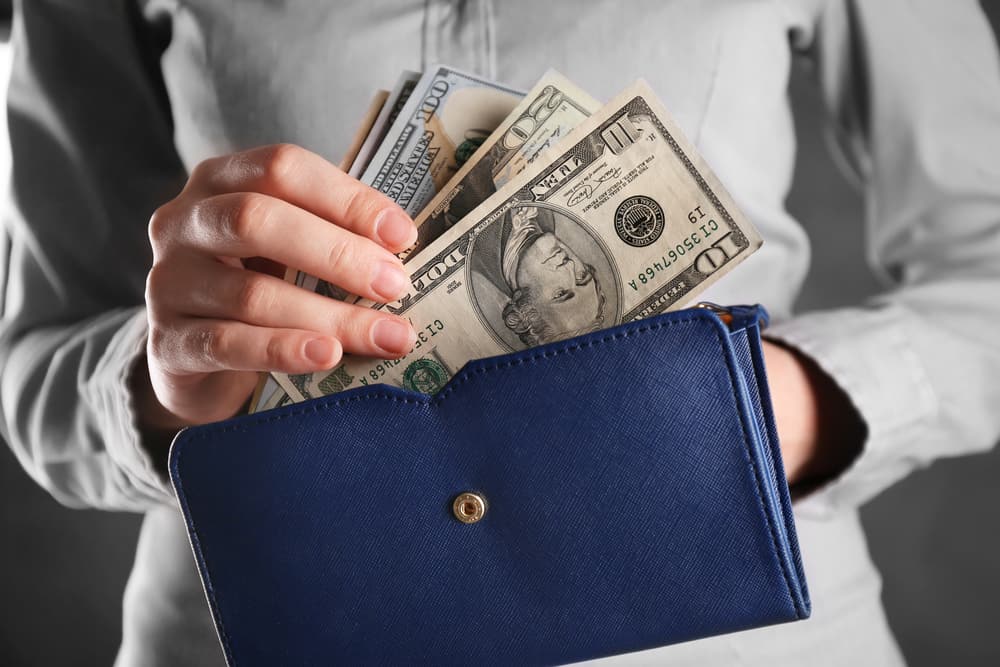 The salary for a beekeeper in the US hovers around $46,000 per year.

The job is worth the salary, and in fact, it may be worth more as it’s a hard job with multiple hazards and discomfort.

Not to mention you are responsible for these creatures’ lives, health, productivity, and profitability.

What Will The Demand For Beekeepers Be In The Future? 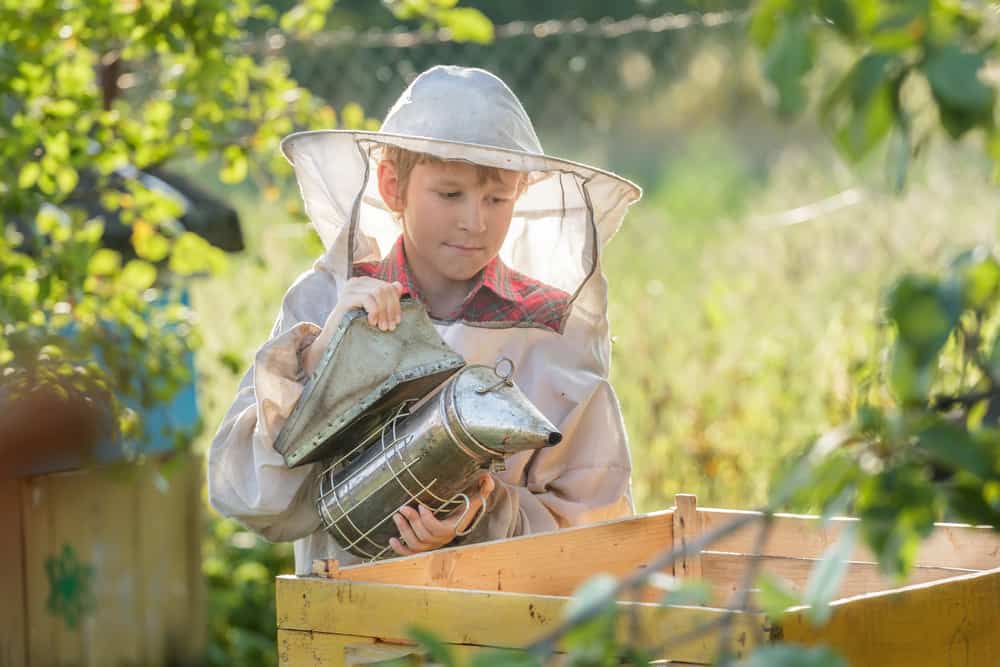 There aren’t statistics available for beekeeping as a whole.

However, it is considered an agricultural position.

Agricultural positions are expected to decline.

Machines are successfully taking the positions that people used to serve.

With technology getting more sophisticated, this is unlikely to change.

The beekeeping industry should stay in demand due to the hands on, human touch that is needed for the job.

How much beekeeping will expand or not is not yet known.

In conclusion, the beekeeping industry is needed.

It should be seen less as a thing to profit from, and more as a service to the planet and our ultimate survival.

It’s a hard job, and those who do it must have patience, a love for the bee, and a keen mind for science and detail.

The beekeeper must be steady handed and possess the ability to lift up to 55 pounds without much issue.

If a bee box is dropped, that spells trouble for both the beekeeper and the bees.

The beekeeper should enjoy and be okay with working in all types of weather, and of course, the joy of nature. 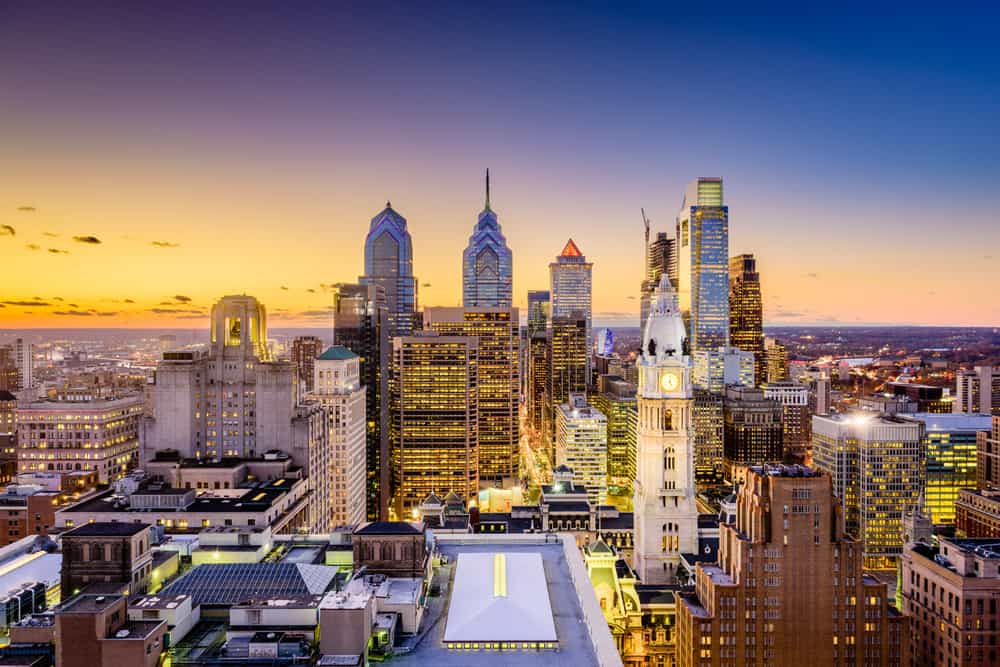 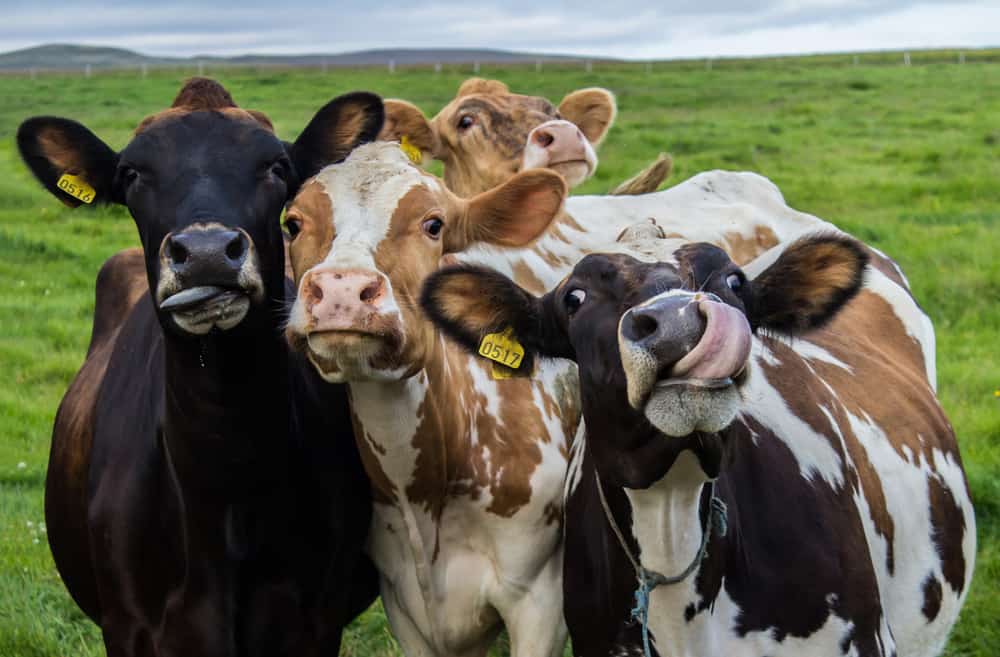 How Often Do Beekeepers Get Stung? (Everything To Know)