You are here: Home / The Cold Spotlight / How Much Money Do You Start With In Monopoly? (Amount) 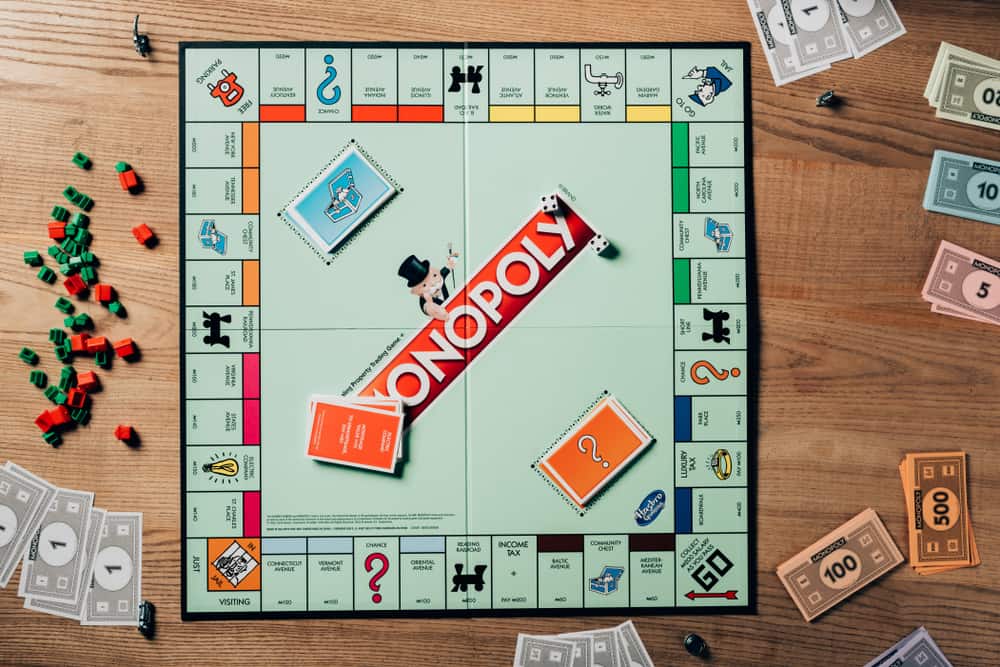 Monopoly is a game of wealth and calculated risk.

It’s actually a great teaching game that allows the players to learn how to get comfortable with handling money and taking a productive financial risk.

Monopoly was a great family pastime before the advent of video games, and it could be addictive.

You can get lost in investing and enjoying the race to buy, sell, and rent property.

It’s still around today, and it remains a fun challenge all over the world.

How Much Money Do You Start With In Monopoly? 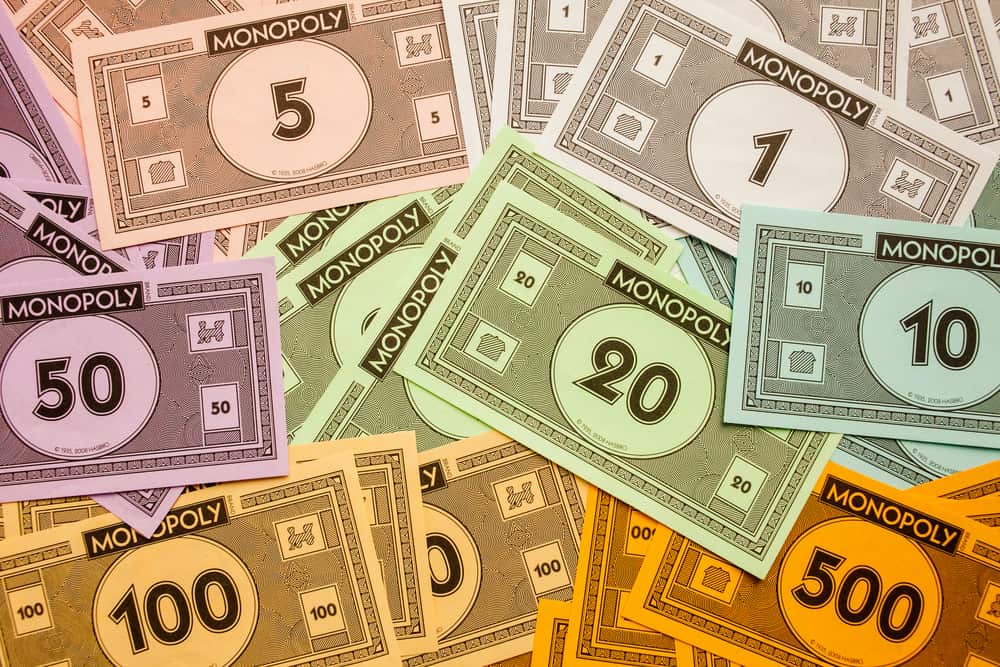 Each Monopoly player begins with $1,500.

The bank keeps the remainder.

For fewer than five players, the banker will remain the banker and a player.

If there are more than five players, the banker can focus on that role and not be a player, or they can be a banker and auctioneer.

The banker keeps all the deed cards and all the real estate and completes the transaction when a player rents or buys.

They are also in charge of paying salaries and collecting rents, mortgages, and income tax.

What Is The Object Of Monopoly? 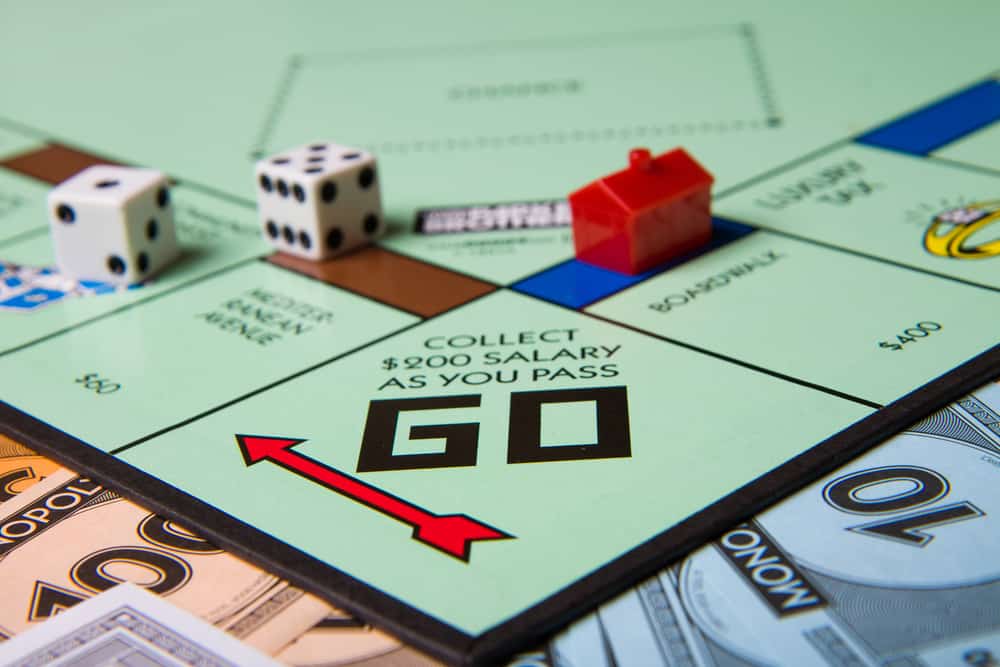 Each player is in a race to become the richest person on the board and bankrupting the whole lot of their competitors.

The goal is met by acting strategically to buy, sell, and rent properties to gain more wealth than the other players.

There are a variety of challenges along the way, even the possibility of going to jail temporarily until you score a “get out of jail free” card.

That gives the other players the chance to gain some financial steam and surpass you.

You still have a chance, though, if you can use that “jail time” to strategize your next move.

What Should My Monopoly Game Come With? 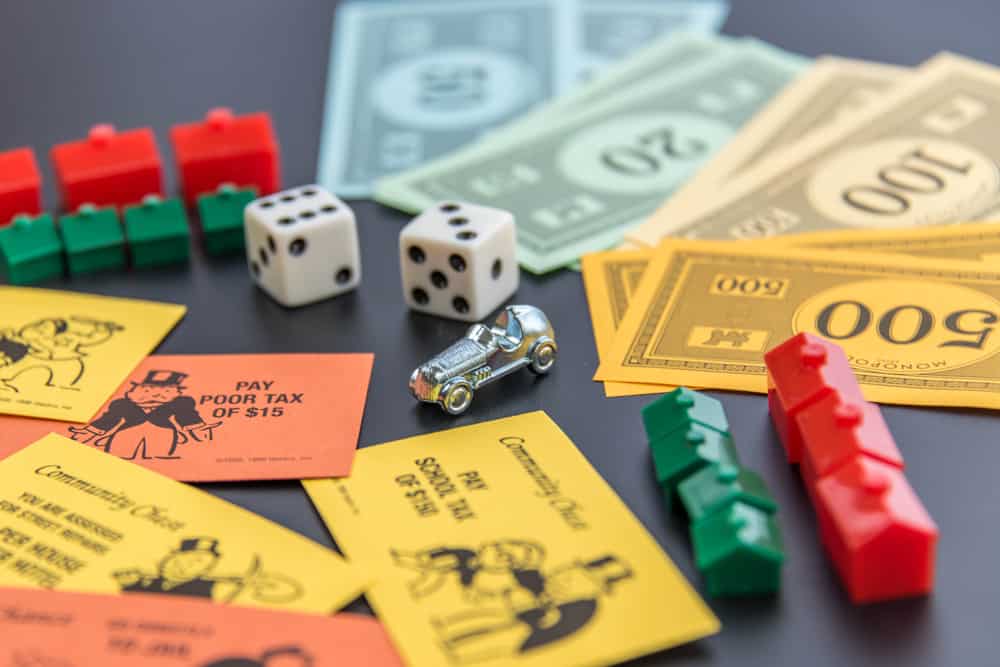 A Monopoly game consists of one playing board, 32 houses, 12 hotels, two dice, play money in several distinctive colors, community chest cards, and the deed cards for all the properties as well as silver-colored playing tokens in different shapes such as a shoe, a dog, or a car, among others.

Monopoly is an old game.

It’s stood the test of time and has been remade in so many commemorative and artistic forms.

There are wooden playing sets that are as good as a collectors’ chess set.

Sometimes people will buy used games, and some of the pieces may be missing.

If you have all the pieces named above, you have a complete Monopoly set and are ready to play.

How Do You Buy Property In Monopoly? 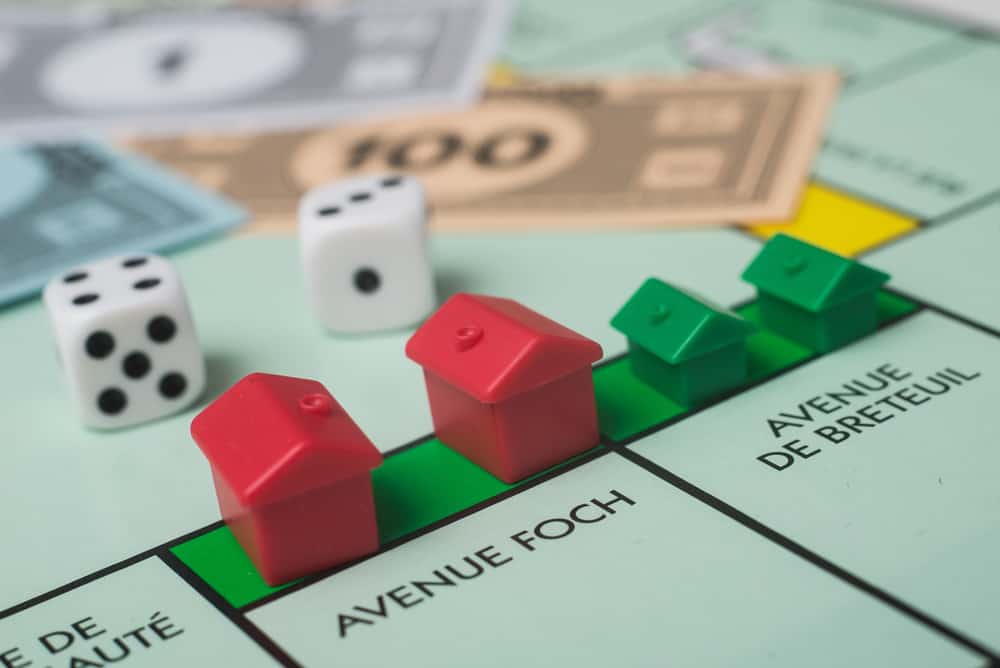 The way you buy a property is by landing on it after rolling the dice and moving your game piece the number of steps indicated by the dice.

If you land on a property that is not owned, you may purchase it at the price that’s printed on the deed card and the relevant space on the game board.

You pay the bank, and the banker gives you the deed card.

You place that deed card face up in front of you for everyone to see.

The deed cards are color-coded because the properties are in groupings that may be all red, for example.

Each grouping of properties will have a colored stripe.

For instance, Pennsylvania Avenue has a green stripe, and so forth.

This makes it easier to keep track of who has the “monopoly” on those properties.

Hence, the reason that the game is called “Monopoly”.

There’s another option to obtain some property apart from buying it.

If you roll the dice and land on a juicy piece of property, maybe one that you’ve had your eye on for the last hour, you can decline to buy it and decide to bid on it.

The rest of the players also have the same chance to bid, and like any other auction, it will go to the highest bidder.

When Must You Pay Rent In Monopoly? 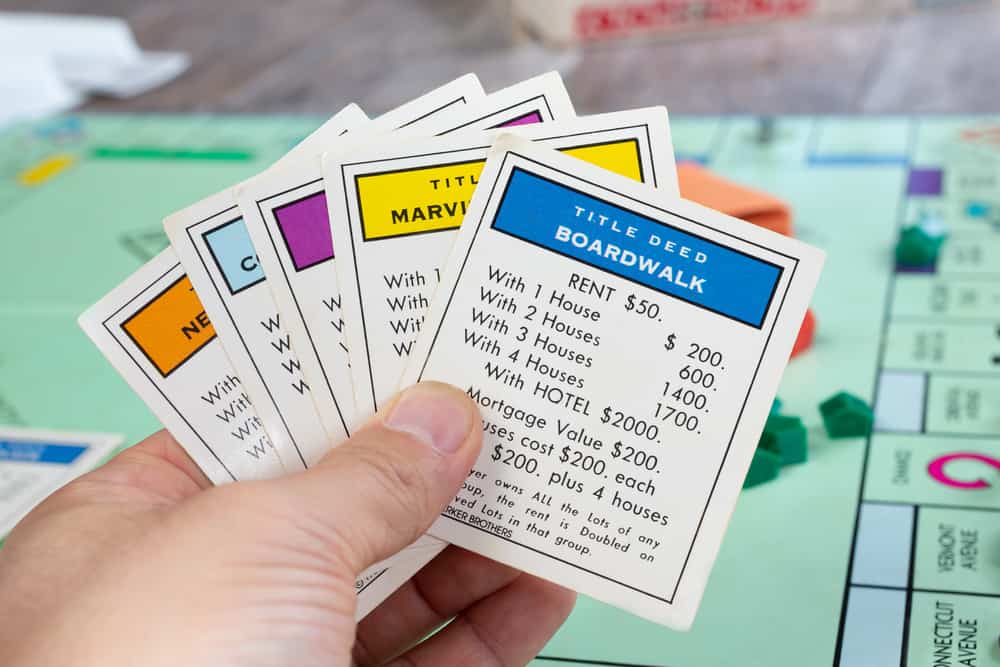 When you roll the dice and land on a property that someone already owns, you must pay rent on it in the amount indicated on the deed card.

It’s not a voluntary choice to rent or not to rent.

The only exception is when the property is mortgaged.

You’ll know a property is mortgaged when the card is turned upside down in front of the owner.

The color grouping comes in handy here for the person who has a lot of properties in a specific color group.

If a player lands on one of your grouped properties, you can charge double rent if the property is not mortgaged.

It can still be rented at double the rate if other properties in the same group are mortgaged.

You can only charge that double rate if the unmortgaged property is not improved, meaning no houses or hotels on it.

If it is, then the rent can be much higher, which is another advantage for the player who holds the most properties in a grouping.

One important note: You will lose your chance to collect rent if you, as the landlord, fail to ask for it before the next player rolls the dice.

When You Pay Rent In Monopoly—Recap 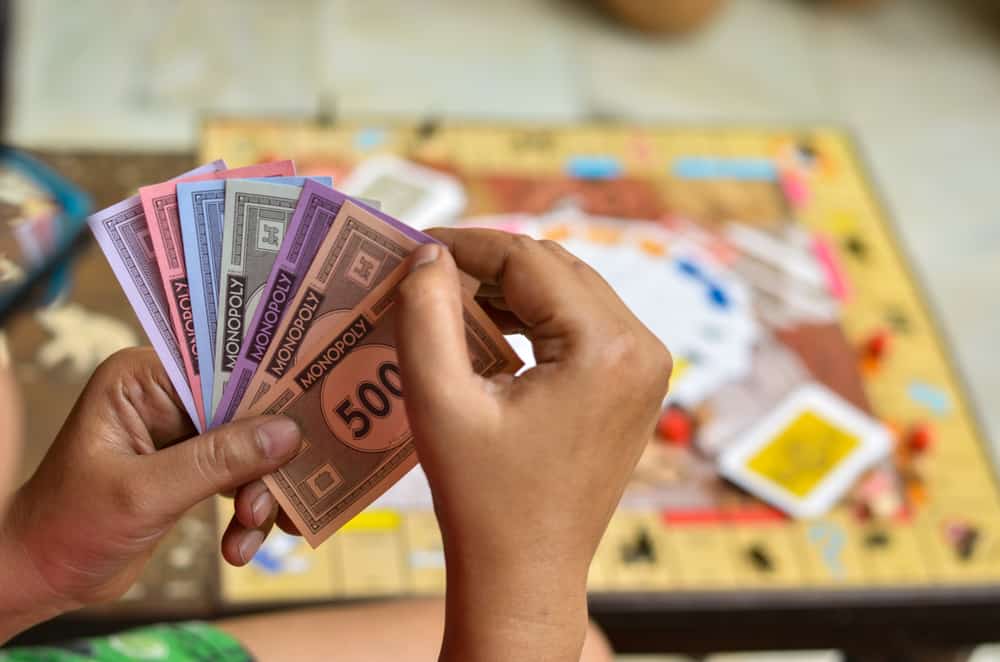 When you own a property that is unimproved, meaning with no hotels or homes on it, you may collect rent on those properties.

You must ask for the rent from the player who just landed on it before the next player rolls the dice, or you lose the right to collect it.

If your property is improved, meaning with hotels or homes, you may charge a higher rent when another player lands on it.

How Do You Set Up The Playing Board And Prepare To Play? 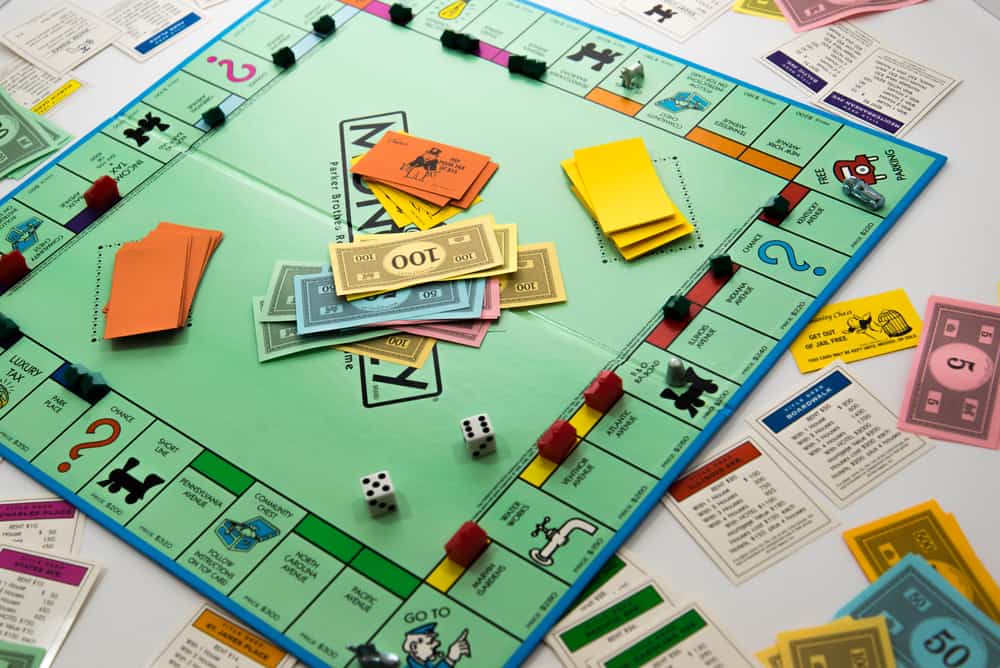 How Do You Play Monopoly? 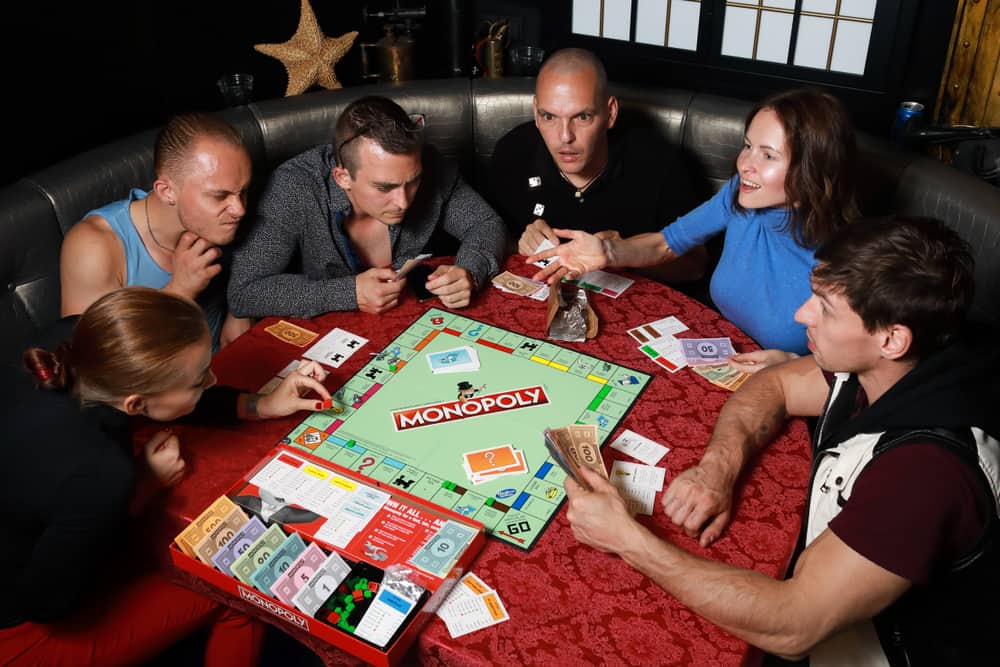 You play monopoly as a game of chance by rolling a dice and moving your token around the playing board and buying as many properties as you can.

You circumvent the challenges along the way and take advantage of the luck you have on the way in order to gain more full sets of properties and bankrupt everyone else to win.

Monopoly is a simple game with a lot of excitement if you like to challenge yourself to see how financially strategic you can be.

If you like investment in real estate and want to dream a little while you buy or develop properties for play money, then this may be an enjoyable experience.

The game goes on, and players may become bankrupt and have to retire from the game.

That leaves fewer players to compete with you.

This can happen when you owe more than you have, and you must relinquish your money and properties to either the bank or one of the other players depending on who you owe.

How Do You Win In Monopoly? 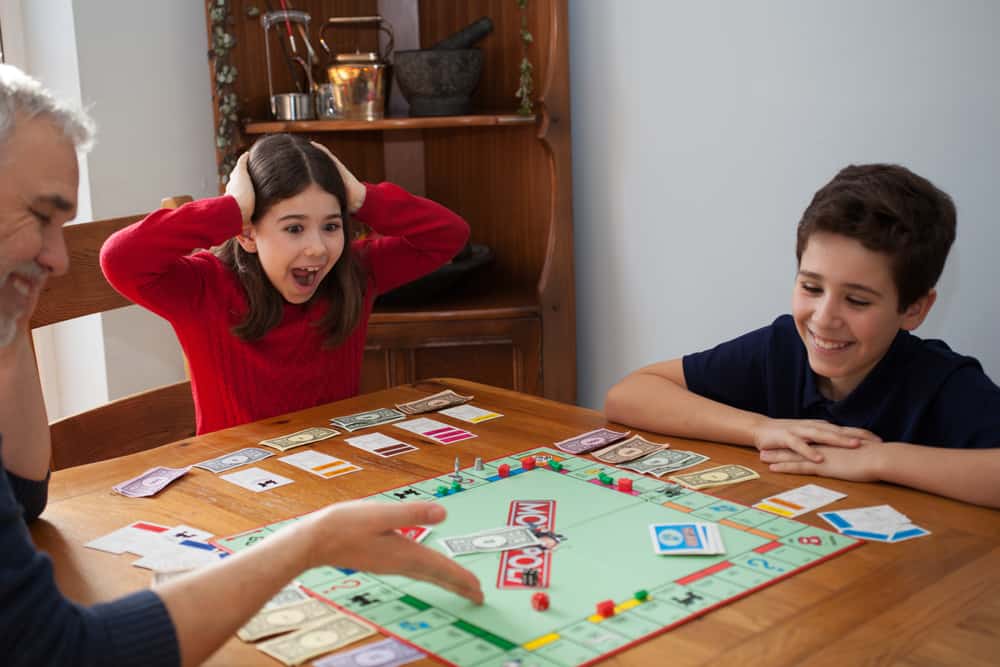 Winning takes place when the last player has bankrupted everyone at the table and has all the money.

The issue with winning Monopoly is that it may take forever to do that.

If you play with at least five people, and you play by the traditional rules, it should take around 90 minutes for someone to win.

However, you could drag the game out until everyone is so tired, they stop playing.

In popular board game forums, this is one of the most common conversation threads.

It’s really up to the players and how serious they are about winning.

Some people play just for time with family and friends, and they really like the fact the game is long for that reason.

There are also tournaments centered on this game, and those players take the competitiveness very seriously.

Monopoly is a game of chance and risk.

It’s a game that’s so versatile, both kids and adults can take part.

It provides the potential of learning about business, transactions, real estate, and investment.

How Much Money Do You Start With In Monopoly? (Amount)