You are here: Home / The Cold Spotlight / How Much Does A Roll Of Quarters Weigh? (Explained) 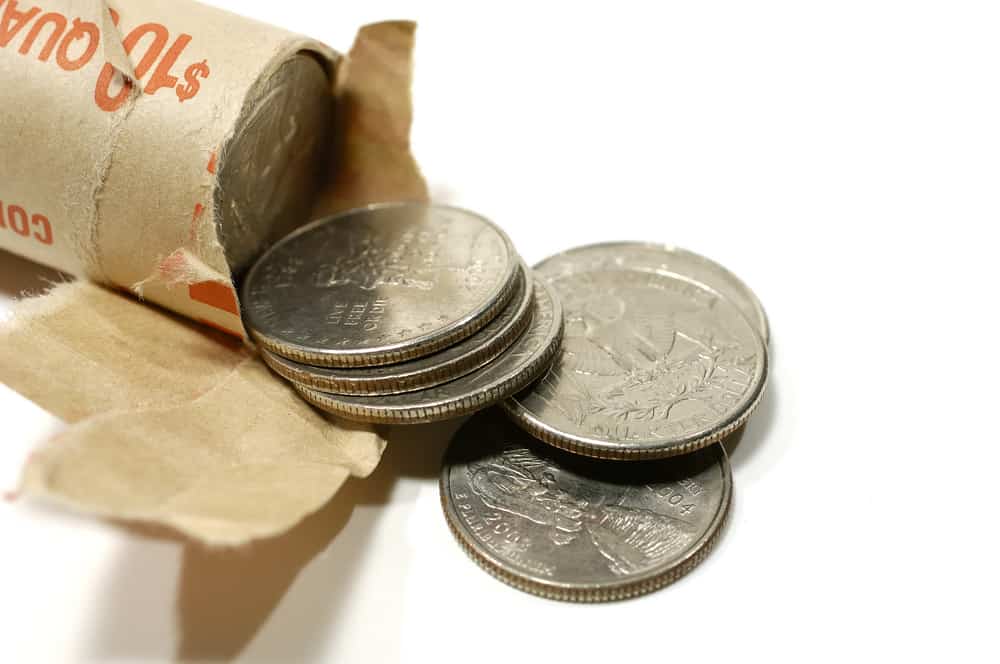 The recent generations may think they’re ready to leave coins in the past, but financially smart people know the worth of a physical dollar.

People are missing out on hundreds of dollars by not keeping track of their coins like quarters, nickels, and dimes.

Gathering and turning in all of the coins that you find lying around can earn you enough money to treat yourself to something nice, pay for your gas, or cover the occasional trip to the grocery store.

Coin rolls are the best way to keep track of how much money you have at home.

How Much Does A Roll Of Quarters Weigh? 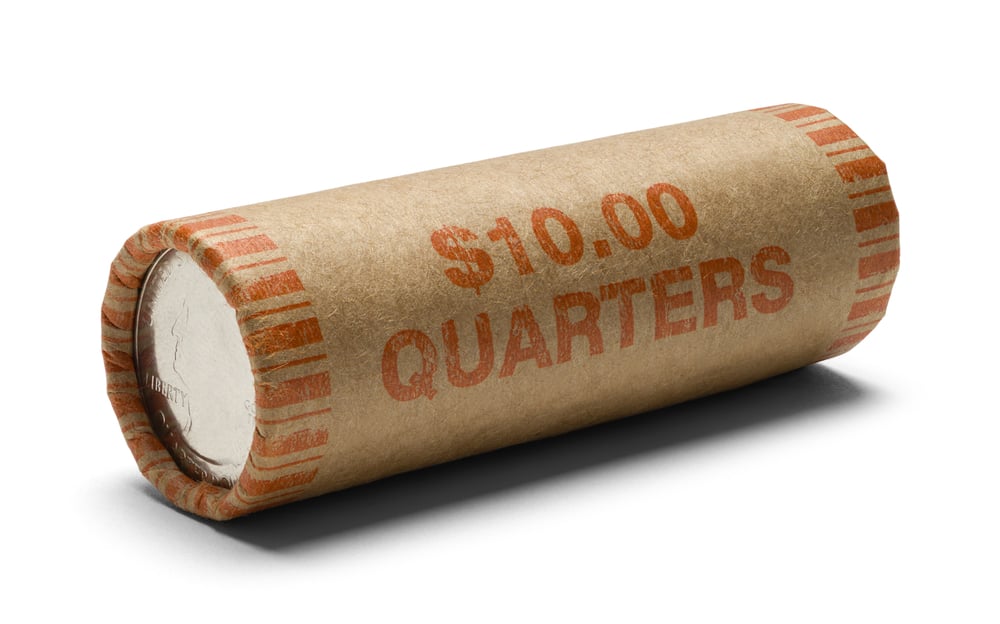 A roll of quarters weighs eight ounces or 226.8 grams.

Each quarter made after 1965 weighs exactly 5.67 grams, and a quarter roll is meant to hold 40 quarters.

This doesn’t include the weight of the rolling papers or the box itself.

When American coins are first minted, they are completely uniform.

Age and use cause them to lose their uniformity.

Coins travel through many different hands and are used frequently, with little to no care about the age of the coin.

Quarters are made with a diameter of 24.66 millimeters and a thickness of 1.75 millimeters.

The uniformity of quarters makes it easier for machines to recognize them.

That’s how a gumball machine can tell the difference between a quarter and a penny.

American coins weren’t a uniform size until 1792 when the Coinage Act of 1792 was passed.

Quarters were once much bigger. If the quarters were made of pure silver, they could weigh 6.01 grams.

Standard silver quarters had to be slightly larger at 6.74 grams.

Although the art of rolling coins may seem outdated to younger generations, it is a great way to keep physical money on hand without it becoming messy.

How To Roll Your Coins 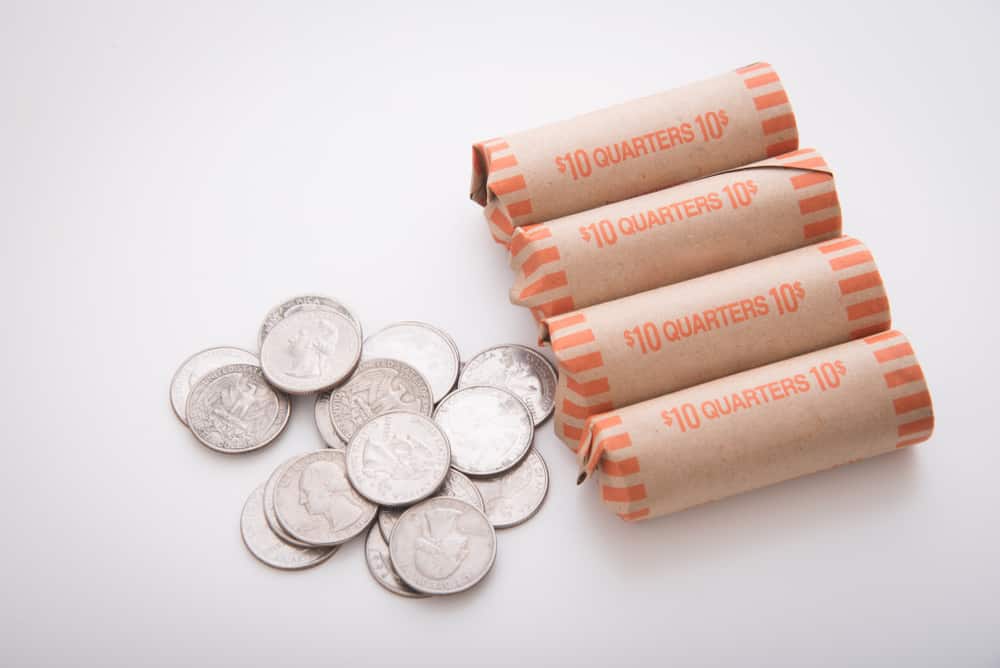 Coin rolls can help you sort out your money, so you can more easily turn it into the bank or carry it around with you.

You can find coin rolls at your local bank, dollar stores, or groceries stores.

They can also be found at some office supply stores.

There are two types of coin rolls.

The flat coin rolls are the cheaper option.

You have to fold both ends of these rolls to make the coins stay inside.

The slightly more expensive option is the pre-rolls, which are better for those who don’t have dexterous hands.

Start by folding a few of your rolls to slip your coins into before you start filling them with coins to help speed up the process.

If you are rolling multiple kinds of coins, you’ll want to sort your coins into piles.

It’s faster to work on one type of coin at a time, rather than bouncing between the coins.

On each roll, you should see how many coins are meant to be in each roll.

Most rolls come in different colors which represent the types of coins, but you can also tell by the diameter of the coin roll.

You’ll want to make sure that you are filling each roll with the exact number of coins specified on the roll.

Overfilling coin rolls means you get less money when you turn them into places, and underfilling them means you wouldn’t have enough to get the full value of the roll.

Once you are done filling the roll of quarters, fold the open end or ends shut.

If you’re worried about them spilling, you can add tape at the end.

Are Coin Rolls Worth It? 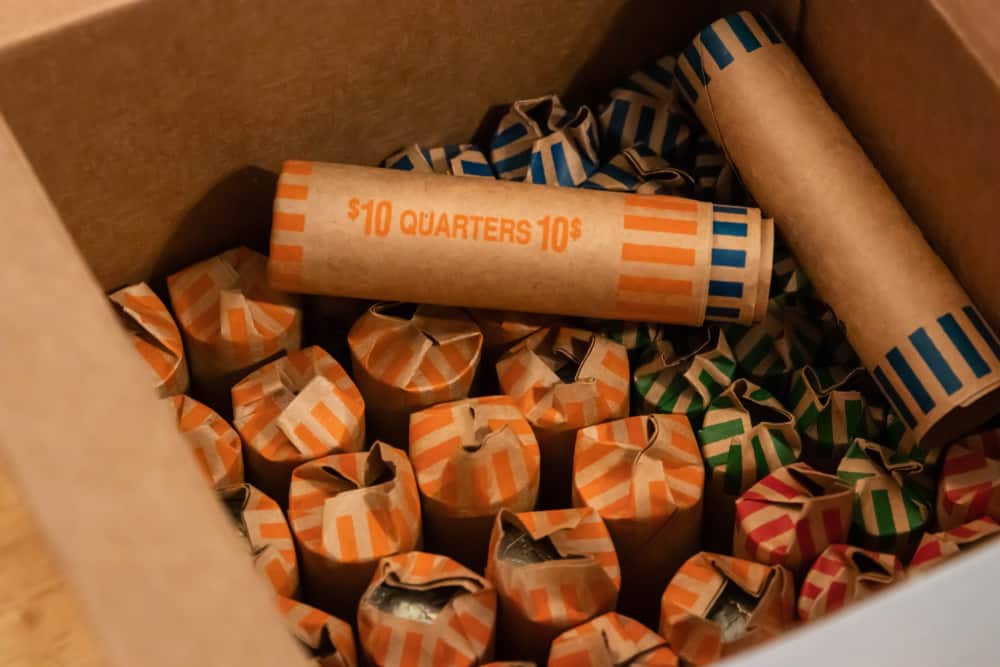 Coin rolls still have their place in the modern era.

While more people are turning to cash cards and virtual wallets, there are still a lot of situations where you’re going to need physical money.

Most people just keep spare change in their car, but leaving loose coins around your car is messy and disorganized.

Coin rolls are the best way to store your physical money without making a mess of your space.

Quarter rolls are especially important because of all the situations in which you may only be able to pay in quarters.

Although many cities are modernizing their parking meters, not all of them have parking meters that accept electronic payments, cards, or even dollar bills.

Special occasions like going to an arcade are perfect for coin rolls if the machines accept quarters.

However, those who are only keeping their coins to cash them out later may want to invest in modern coin-counting methods.

You can buy coin jars that read how much money in coins is put into the jar, totaling the dollar amount on a small screen on the lid.

You can also just keep your coins in a plain plastic jar and turn them into a coin-counting machine at your local grocery store.

Coinstar is the most common type of machine that you’ll see at stores like Kroger or Meijer.

It is important to remember that when you use machines like Coinstar, they take a percentage of all the coins that you turn in.

While each machine will have a different fee, the average fee is about 11.9%.

You can choose to be given a no fee electronic gift card through Coinstar, but your choices are limited.

You may also choose to donate your coins to a charity that Coinstar supports.

Why Do Quarters Need To Be The Same Size? 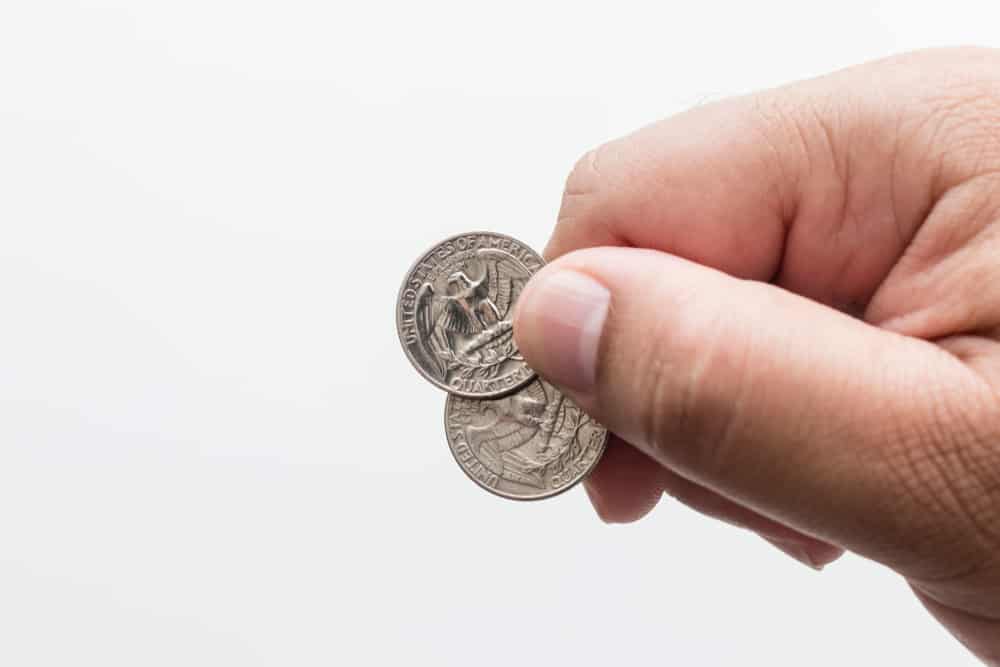 Quarters need to be the same size because their weight is where their worth comes from.

Modern quarters are made out of 75% copper and 25% nickel, with the nickel simply acting as a coating for the copper.

When quarters were first introduced to the American economy, they were made out of pure and standard silver.

There were many different types of coins circulating around the market before Congress created the United States Mint in 1792.

Trying to work with all the different coins from different economies made trying to price things a nightmare, which is why most people chose to trade goods with local store owners and neighbors.

By regulating which coins had what value, it helped normalize the different economies that were happening in the nation.

Even when the United States Mint was able to regulate the value and size of their coins, there were still more types of coins in rotation than what is in rotation today.

By having quarters of the same weight, both the people and the government were getting the proper amount of silver that they were promised.

Eventually, the United States government decided to change the materials of their coins with the Coinage Act of 1873.

The government realized it was too expensive to make their coins out of such fine materials, so they steered coins away from their use with this new act.

This act also made American coins the only legal tender.

During the 1960s, there was a major silver shortage.

The Coinage Act of 1965 was the act that created the quarters we know today. 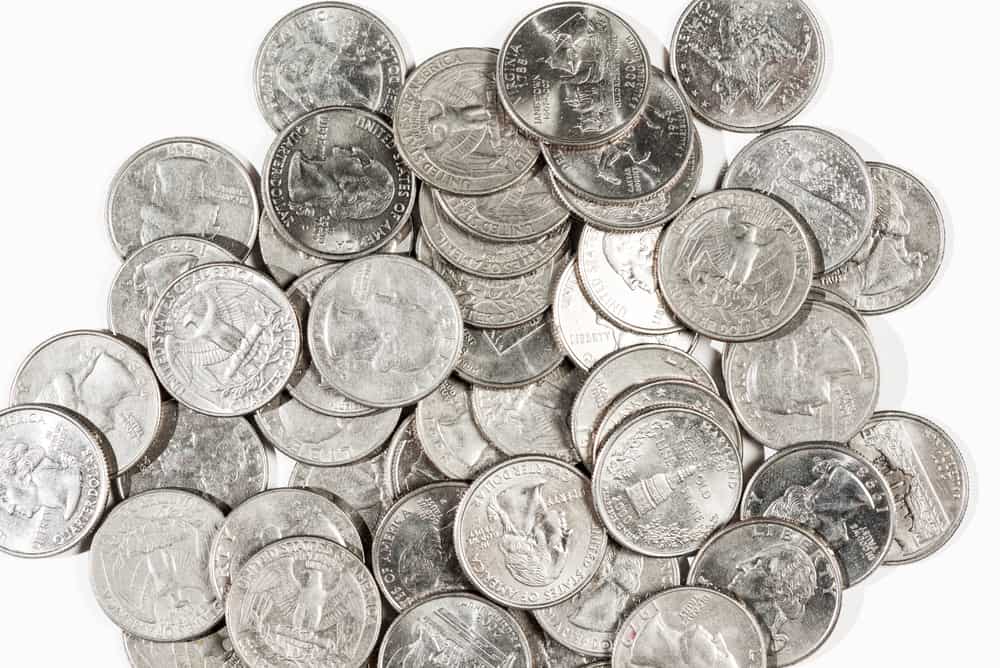 The quarters that are worth 25 cents are the ones that were minted after 1965, but coins minted before 1964 contain silver and can fetch a higher price in the silver and gold market.

Some people will hunt down these coins as a hobby which is called coin roll hunting.

Coin roll hunters like to gather rolls of coins that have been sitting around in people’s houses to see if any of the coins were minted in 1964 or before.

Some people like to buy their coin rolls from the bank and carefully examine each quarter to see if they’re valuable.

While looking for silver coins, you may also come across other kinds of rare coins as well.

Coins with defects, such as text being misprinted, will also boost the value of coins.

Anomalies in some coins can make them worth hundreds or thousands of dollars.

A silver quarter can be worth $3 to $5 depending on the quality and age of the coin.

The 1932 Washington quarter can be worth more than $100 if it has a mintmark.

These quarters were the first coins to have President George Washington on one side.

Before George Washington was on our quarters, it was Lady Liberty who had her face and her body on the side of the coin over the years.

The quarters with Lady Liberty on them can fetch thousands of dollars.

The most expensive quarter that you can find is the 1796 Draped Bust quarter.

On one side, you have Lady Liberty’s side profile that goes down to her shoulder and chest.

The other side has a small eagle surrounded by decorative vines.

The starting price of this coin is $10,000 if it is in good condition for a coin that has been around for 225 years.

Don’t Underestimate The Value of Change 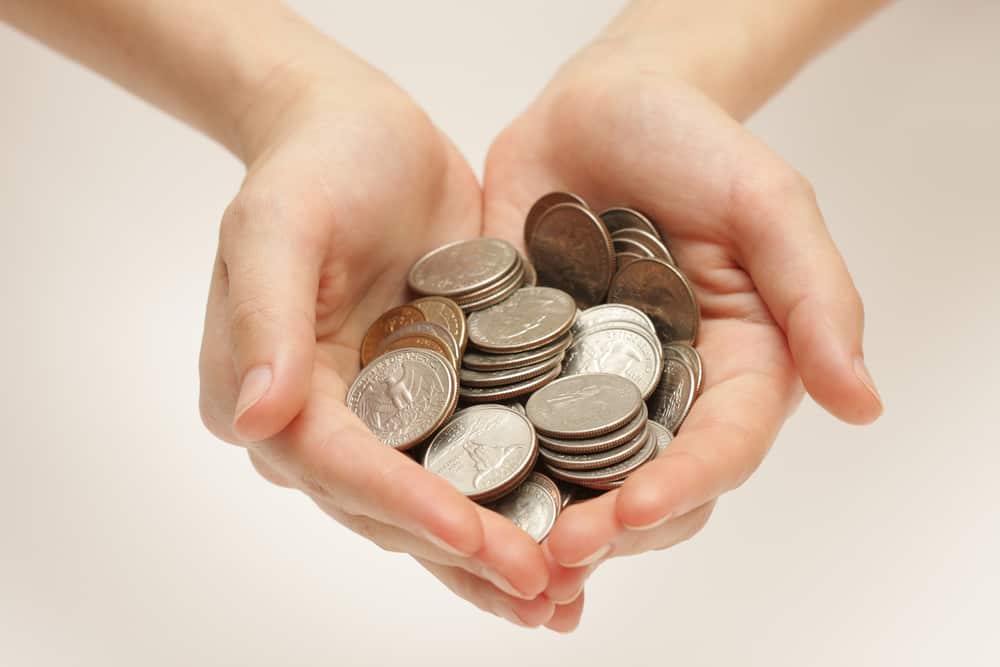 Quarters aren’t ready to be discontinued quite yet because they’re still incredibly useful for paying different types of machines.

Quarters also have the potential to be worth much more than their face value.

Keeping all of the quarters you see lying around can create a mess, which is why coin rolls are so incredibly useful.

Make sure to inspect your quarters before sliding them into a coin roll because you don’t want to miss out on a potential fortune.

Although there may be more efficient alternatives to earning money from all the coins you find, you won’t lose as much money when you turn coin rolls into the bank instead of using a coin-counting machine.

Although younger generations may believe that physical money is going out of style, they should learn the usefulness of physical money when you need it outside in the world.

Virtual wallets and cards won’t work when the power is out.

There are many reasons that physical money will never fully go away.

How Much Does A Roll Of Quarters Weigh? (Explained)