You are here: Home / The Cold Spotlight / How Many Face Cards Are In A Deck? (Explained) 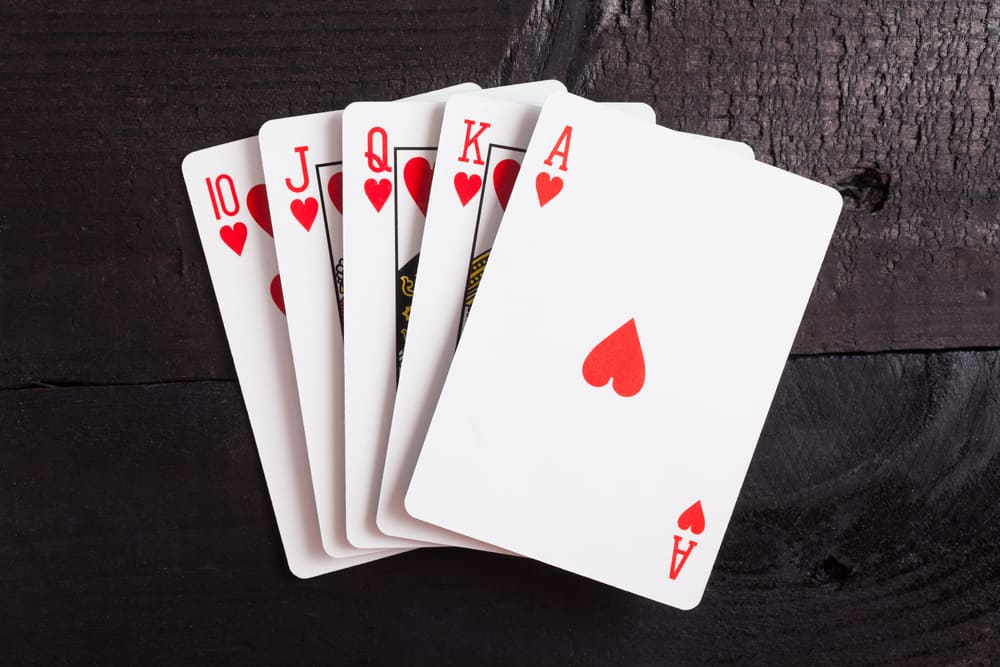 People worldwide use playing cards to pass the time, have fun with friends, and improve cognitive function.

You probably know that a deck of playing cards contains a total of 52 cards, excluding jokers.

However, do you know how many face cards there are?

Face cards represent a winning hand in many games, and you may need to know how many are in a deck to help you anticipate your next move.

How Many Face Cards Are In A Deck? 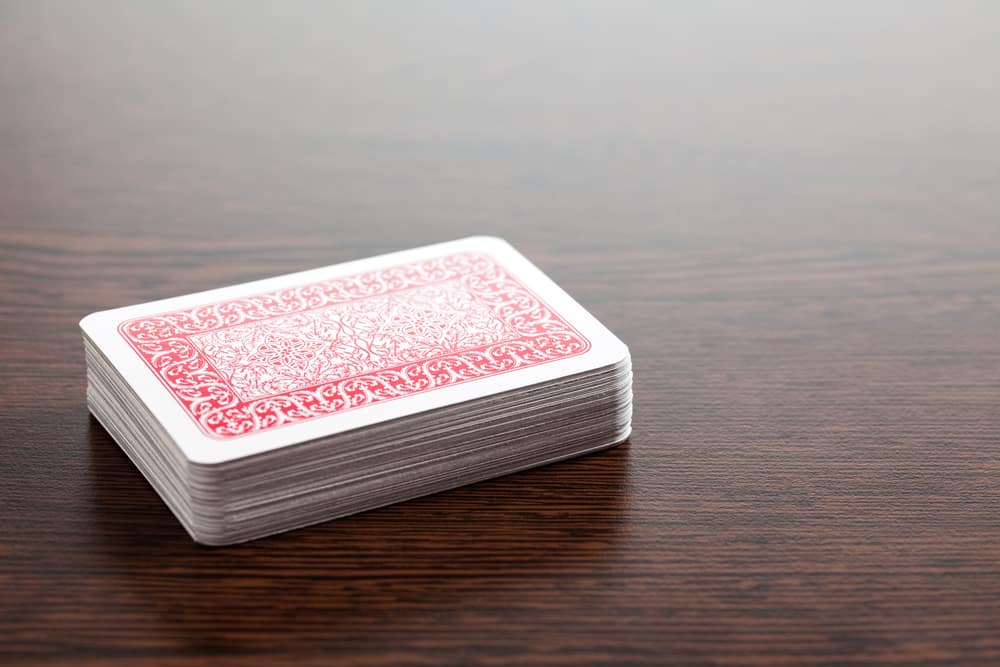 In a standard deck of 52 cards, you will find 12 face cards: four jacks, four queens, and four kings (in order of rank).

Some people call these 12 cards “The Court”.

You will also find 36 numbered cards (four each of numbers two through 10) and four aces.

Some people consider aces face cards, but the term “face card” only applies to the jacks, queens, and kings.

The deck contains a face card in each suit (clubs, hearts, spades, and diamonds), and you will find 13 cards in each suit, including the face cards, number cards, and the ace.

While not included in the total of 52 cards, you may also have two jokers, sometimes used as a wild card to spice up gameplay to certain games.

If you just opened a new pack of cards, be sure to remove the jokers if they don’t fit into your game.

You may want a face card to complete a desirable hand, but are you sure that your hand will beat the other players if you get the card you want?

While not applicable to all games, we will cover the card rankings for some of the most popular games, such as Five Card Draw Poker (from low to high): 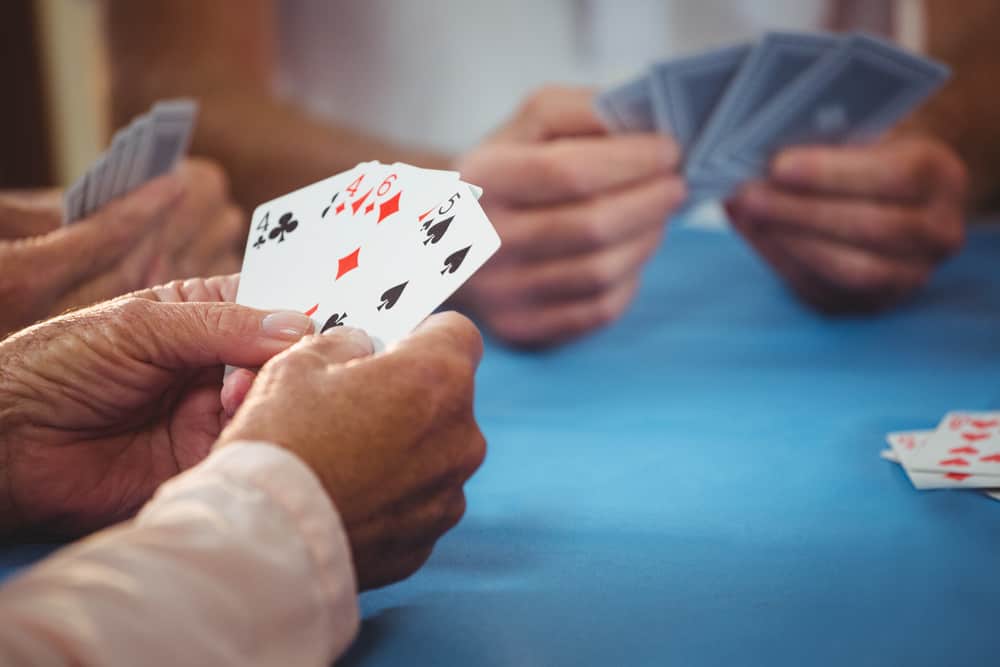 As part of ordinary society and seemingly since the beginning of time, it’s hard to think of a time when people didn’t enjoy playing cards with each other for fun and gambling purposes.

We may not know the exact history and origin of playing cards, but evidence indicates people played cards hundreds, possibly even more than 1,000 years ago.

The Tang dynasty played drinking games with cards or used cards to represent money while gambling.

However, these games didn’t use the same 52-card deck we use today.

The first solid evidence of a 52-card deck comes from the records of a German monk named Johannes.

Hand-crafted artisanal cards became popular in the affluent crowds of Italy until Germans developed inexpensive cards that depicted everyday life and were designed to be affordable. 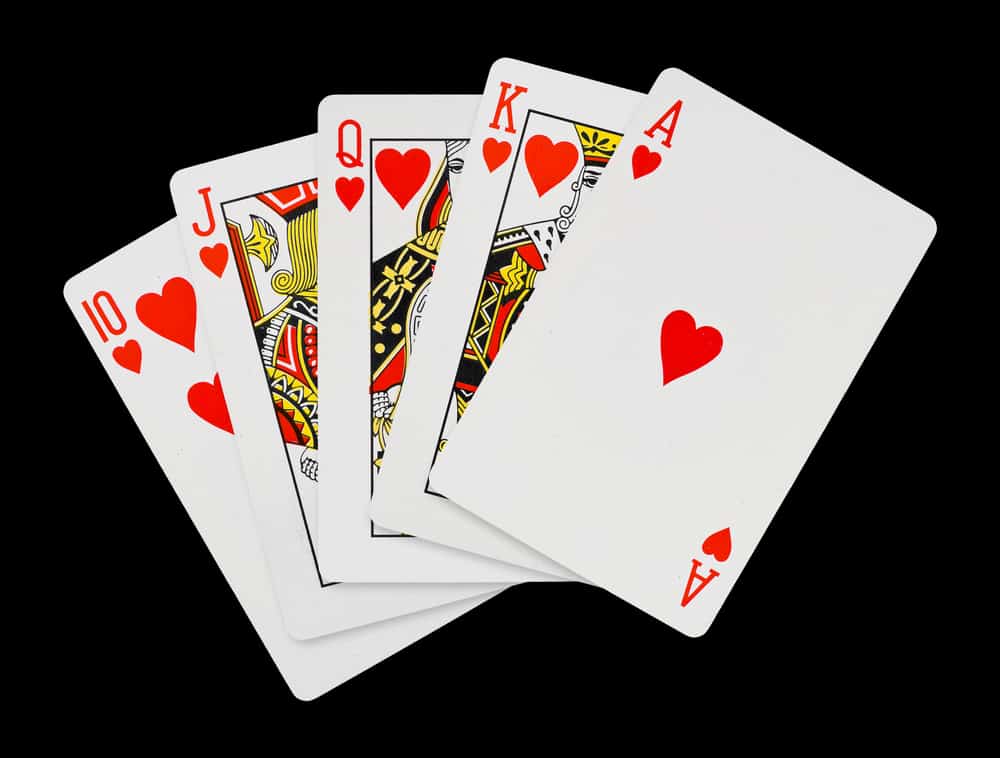 A lot of thought went into the cards we use to play drinking games.

When you know the thinking behind the seemingly arbitrary figures, you may appreciate the complexity and longevity of the system.

Have you ever wondered exactly who the characters on your playing cards were?

Well, many people believe that the cards represent specific people.

At times, this may have been true, especially in 16th century France.

However, the truth is that the figures don’t definitively represent one particular person.

That doesn’t mean that people haven’t tried to put a name with each face.

Each face card is associated with royalty and other famous characters throughout history and literature.

While some people debate who’s being depicted in one or two of the cards, the findings are relatively consistent.

See the following guesses about who each face card represents:

While interesting, you shouldn’t use your playing deck as a historically accurate reference for what any of these people looked like.

The cards don’t necessarily represent the legacy of each character, either.

The King of Hearts represents Charlamagne (or possibly Charles VII).

The card obtained the nickname “Suicide King” since the card depicts a sword through the king’s head.

However, Charlamagne and Charles VII both fell to illness after long lives.

The figure on the card also doesn’t have a mustache, while most depictions of Charlamagne have prominent mustaches, though Charles VII does not appear to have a mustache.

It’s not just the face cards that have symbolic meanings.

The four suits represent the four elements showcasing the ancient appreciation for elements of nature:

Some other fun symbolism found in playing card imagery include: 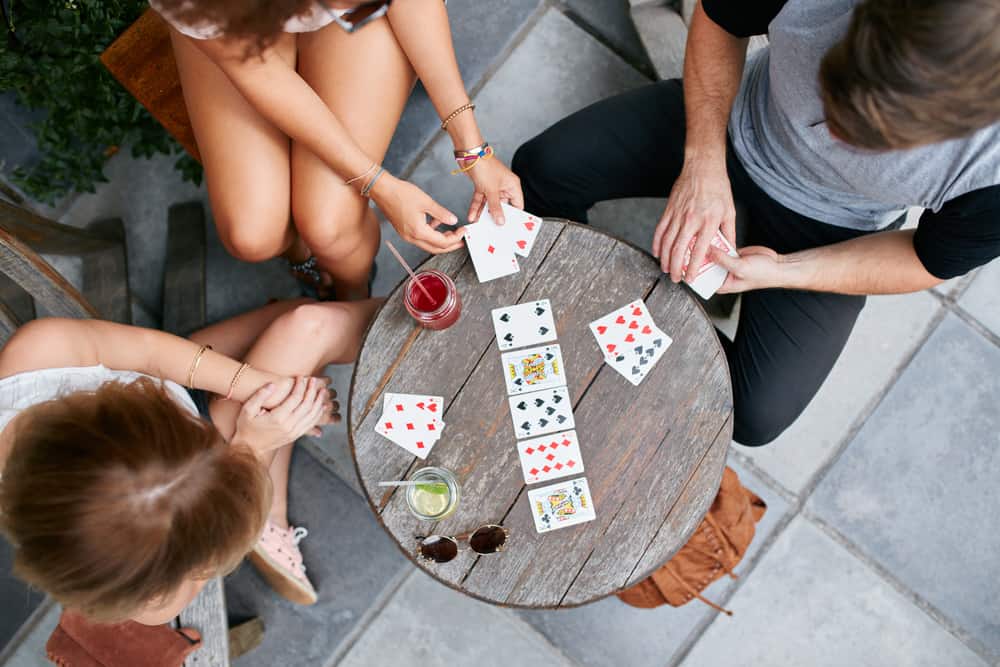 Most people play cards with a standard deck of playing cards that follow a traditional appearance and cars, as we explained them.

However, there are style variations that might look a bit different.

A transformation deck adds a bit of flair to the common imagery we all know by allowing the deck designer to manipulate the pips on the cards.

Pips are the characters that indicate the rank and suit of the card (e.g., the seven spade shapes on the seven of spades card).

A transformation deck may enhance the pips to make them larger or even transform them all together to be paw prints or pieces of candy.

A proper transformation deck keeps the pips in their original positioning.

Semi-transformation decks give the designer more freedom to change the placement of the pips.

Card games are fun, and novelty decks add to the fun with unique images replacing the traditional pictures.

Usually, this applies to every card, but it sometimes only applies to the face cards.

You can find novelty decks for just about any category you can think of, from The Simpsons-themed playing cards or custom-made cards that represent the whole family.

A novelty deck can be a promotional tool for a business or make a great souvenir from a landmark or travel destination.

Not all decks look the same as they do in America.

Some countries use completely different suits than the ones we are familiar with.

The difference is especially evident in Europe.

France uses the spades, hearts, clubs, and diamonds we use.

However, Italian/Spanish cards and German/Swiss cards use different suits altogether.

You should still be able to play any game you would normally play as long as you clarify which suit matches the suits you know.

Whenever games of chance are afoot, people try to manipulate the results.

However, after some basic tricks no longer satisfied the audiences, magicians needed help from special card decks.

Marked decks have special indicators to help magicians identify the specific card required to pull off a trick.

Casinos regularly suffer from fraud, so they take special precautions to ensure they eliminate the likelihood of fraud.

Casino decks usually have a hole punched into them.

The holes in the cards indicate that the deck has been put into play.

Casinos also change decks regularly based on their policies.

These include some casinos changing decks after every game.

Casinos will also shuffle multiple decks together to ensure as much variety as possible. 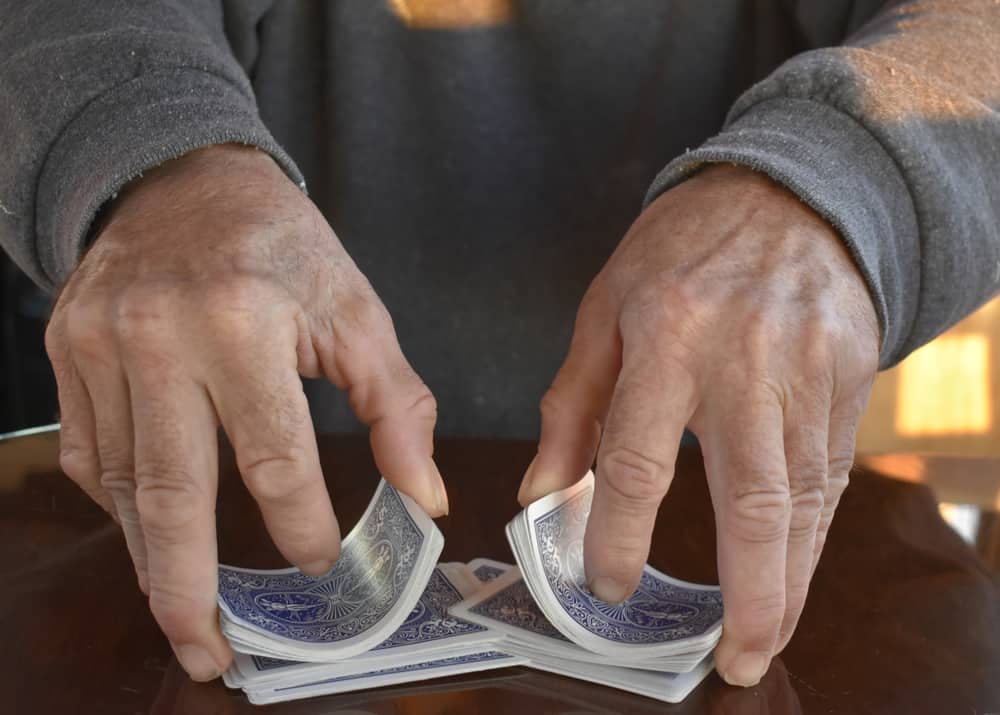 It’s not enough to know how many face cards are in a deck, but you must also know the probability of receiving the card(s) you need.

If starting from a fresh 52-card deck, the probability of receiving a face card comes to 6/26 (roughly 23%).

Some situations may call for a face card of a specific color.

If you absolutely must have a face card of one specific suit, you have a probability of 3/52 (5.8%).

Working from a full deck, you have a 50% chance of picking either a red or a black card.

You have a 25% chance of picking any specific suit.

Keep in mind, these numbers assume that you will start with a full deck of cards.

(The inaccessible number can be written as 8.06e+67, and it’s referred to as 80 Unvigintillion.)

This number is not necessarily practical since most games don’t require a specific order of specific values and suits for all 52 cards.

To make the numbers more applicable to everyday card playing, consider the possibilities of a mere two cards.

What is the possibility you pick two aces in a row?

There are a total of 2,652 possible outcomes when picking two cards out of a deck of 52 cards.

Order counts in this example.

To calculate the probability of picking up two aces in a row, you have a 2/26 (7.7%) chance of picking an ace on your first attempt.

If you picked up an ace against the difficult odds, you would then have a 3/51 (5.1%) chance of picking up a second ace on your second attempt.

To determine the likelihood of both of those things happening, in this order, you multiply your odds together.

To help illustrate the point that the odds are slim, we will use the same example.

As you incorporate more cards, the possible outcomes and likelihood of reaching those outcomes diminish.

For example, there are 2,598,960 possible outcomes when picking cards for a 5-card draw.

Some people guess the probability of receiving certain cards based on the cards that have already been played.

In these situations, you need to remain aware and use your short-term memory.

Whether you like to play poker at the high rollers’ table or relax playing solitaire by yourself, learning about your deck of cards will help you win your game and learn about strategy, problem-solving, and statistics.

Now that you know how many face cards are in a deck, all you have to do is learn how to win.

How Many Face Cards Are In A Deck? (Explained)