You are here: Home / The Cold Spotlight / How Long Does It Take To Watch All The Harry Potter Movies? (Explained) 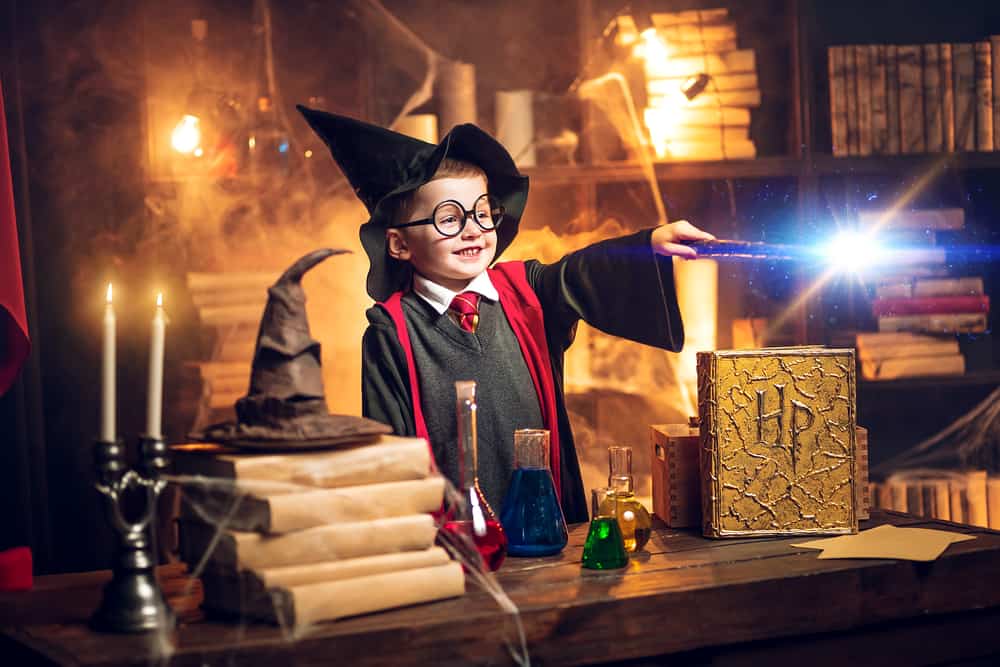 The Harry Potter franchise is one of the most successful stories of popular children’s books made into films, having spawned a variety of movies, video games, and even an entire theme park.

These books and films truly make young and old viewers alike long for the world of magic.

Harry Potter fans are known for being incredibly dedicated to the franchise, earning their fanbase the nickname, Potterheads.

It’s not abnormal for fans to create multiple-day movie marathons out of watching all the films in order, but it’s also no small feat.

How Long Does It Take To Watch All The Harry Potter Movies? 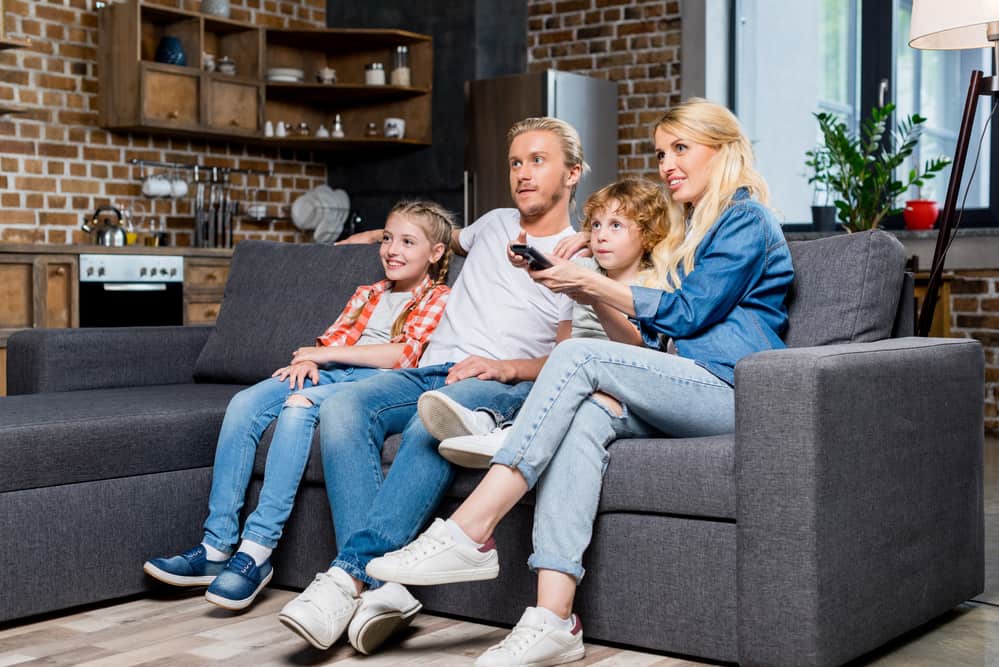 It takes nearly 20 hours to watch all the mainline Harry Potter movies back to back, making it incredibly difficult to binge all the movies within 1 day.

There are 8 films in the original Harry Potter series and 3 movies from the spin-off series Fantastic Beasts.

Each of the mainline films is over 2 hours long, with the first film in the franchise Harry Potter and the Sorcerer’s Stone coming in at 2 hours and 32 minutes.

Harry Potter and the Chamber of Secrets is the longest film in the franchise, at 2 hours and 41 minutes.

The third film, Harry Potter and the Prisoner of Azkaban, is 2 hours and 22 minutes.

Harry Potter and the Goblet of Fire is the second longest mainline movie at 2 hours and 37 minutes.

The second shortest film is Harry Potter and the Order of Phoenix, which is 2 hours and 19 minutes.

Harry Potter and the Half-Blood Prince is 2 hours and 33 minutes, making it only a minute longer than the original film.

Although the book Harry Potter and the Deathly Hallows receives the most screen time, its movies are shorter.

Where Can You Stream All The Harry Potter Movies? 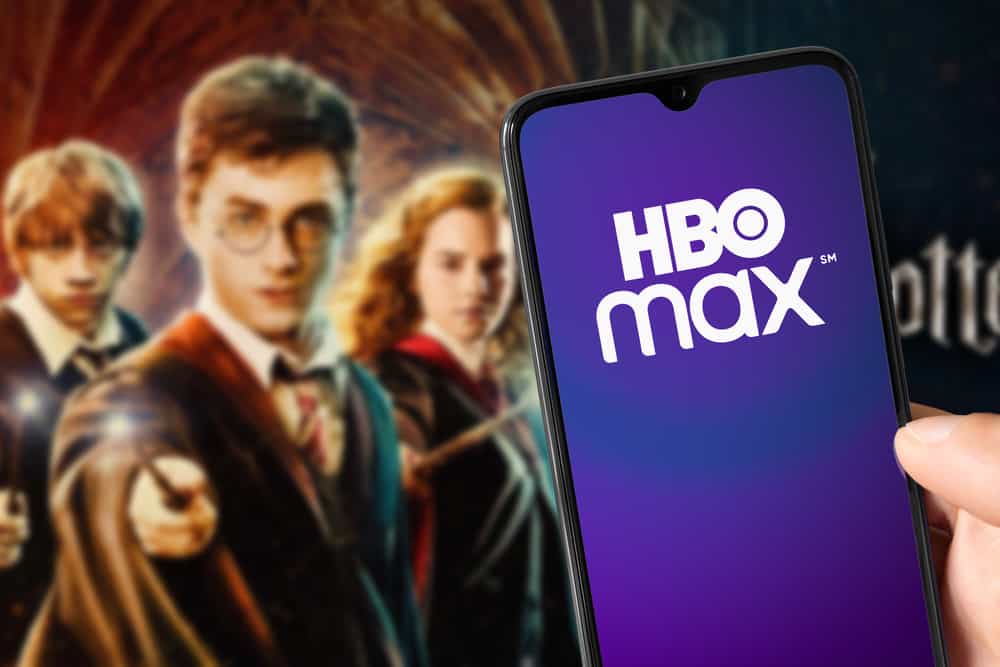 Those who are looking to stream all of the Harry Potter movies will be able to find them on the free streaming application Peacock, with the films previously appearing and reappearing across multiple streaming sites.

Up until recently, both the Harry Potter mainline movies and Fantastic Beast movies could be found on HBO Max, but HBO Max has since lost the rights to the mainline films to Peacock.

Since their introduction to HBO Max, there are rumors that the streaming platform is looking to make its own live-action spin-off series of sss own.

HBO Max also has the rights to the Harry Potter 20th Anniversary: Return to Hogwarts retrospective special, with the main cast playing a lead role in reminiscing about their favorite childhood memories of filming these beloved movies.

The last day to watch Harry Potter on HBO Max was August 31st of 2022, and the mainline films can now only be found on Peacock.

Some fans and HBO Max subscribers have been frustrated with the fact that HBO Max only had the mainline Harry Potter films for a little over a year.

Those who don’t want to chase down the franchise as it hops between streaming platforms should consider investing in a box set of DVDs.

You can purchase all 8 mainline films on Amazon, or rent them individually.

Although some consumers may have believed that the time for DVDs and physical media was over when streaming and higher-level internet-based services improved, the struggle that comes from juggling streaming platforms has led more consumers to reconsider their opinions on DVDs.

For now, the mainline films and spin-off films have been separated from their counterparts.

Fans can use the free tier of Peacock to relive at least some of the magic. 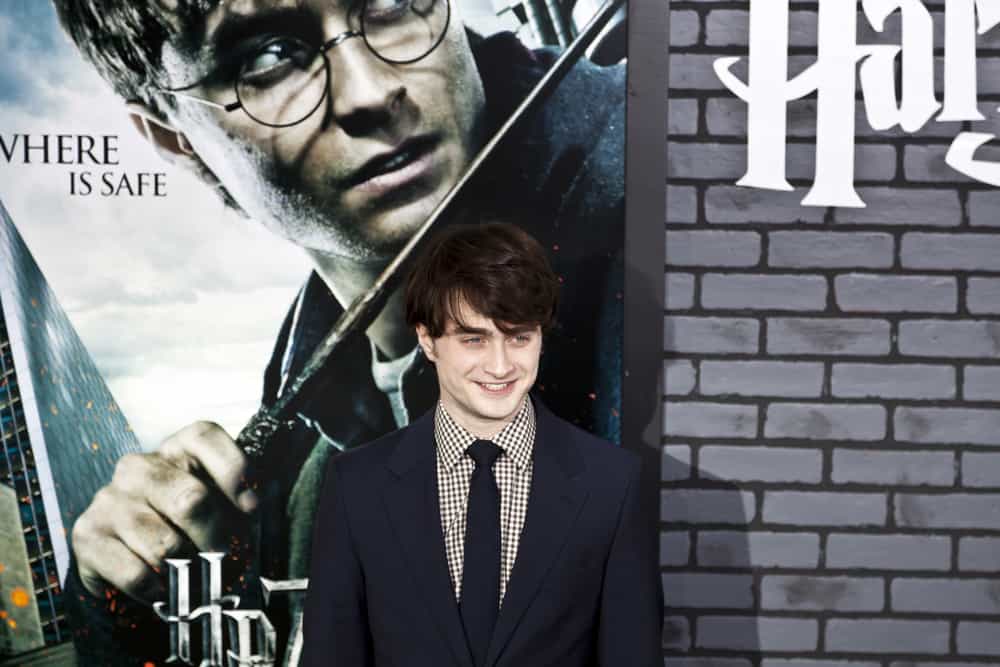 The majority of Harry Potter fans consider Harry Potter and the Prisoner of Azkaban to be the best film of the franchise.

This film played a crucial role in the way that future Harry Potter films formulated themselves, which was a major problem as both the cast and target audience were aging.

At this point, the books were growing much longer and not all the content from the books could fit into the already long runtime of the films.

The solution chosen by the production team was to drop any story detail that didn’t come from Harry Potter’s perspective.

Harry Potter and the Prisoner of Azkaban was one of the first films to follow all that director Chris Columbus had set up, making both the characters and their surroundings less whimsical and more gritty.

What fans appreciate about this film the most is the way that it allows you to feel the magical world around Harry Potter and his friends.

The tactile direction of the film and the cinematography is some of the best that the franchise has to offer.

This was also the first film to feature Michael Gambon as Professor Dumbledore following the passing of the original actor Richard Harris.

Daniel Radcliffe did an excellent job of showing a Harry Potter who was starting to mature and see the world around him for what it truly was.

Harry Potter and the Prisoner of Azkaban features one of the fanbase’s favorite characters, Sirius Black who is played by Gary Oldman.

Between Sirius Black and Remus Lupin, Potter was finally able to find the father figure he was looking for even if it was only for a limited amount of time.

Most fans consider Harry Potter and the Chamber of Secrets to be the worst film out of the franchise.

Are The Harry Potter Movies Scary? 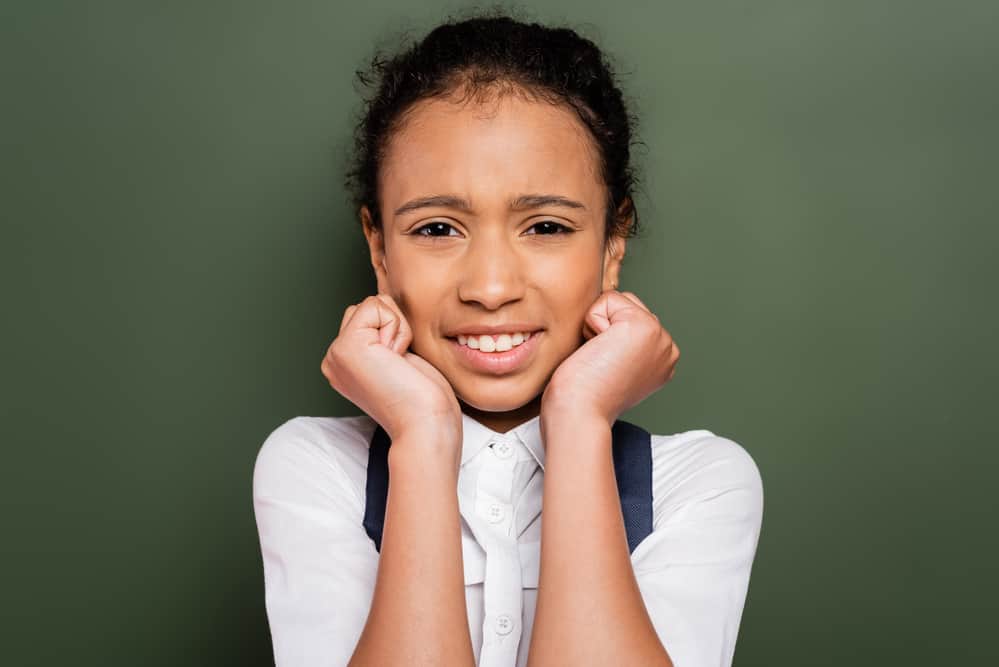 Yes, the Harry Potter Movies are known to have scary scenes in them that would easily frighten younger viewers.

Most fans consider Harry Potter and the Deathly Hallows Pt. 1 to be the scariest film out of the franchise.

Although some viewers may believe that the film moves too slowly, that’s part of what makes some scenes terrifying.

Viewers have to sit back and watch as Harry Potter and his friends are tortured in multiple ways and nearly killed on multiple occasions.

The scariest scene in Harry Potter and the Deathly Hallows Pt. 1 is when Nagini bursts out of Bathilda Bagshot’s corpse.

Another scene that is hard to watch is when Bellatrix carves “Mudblood” into Hermoine’s arm.

Harry Potter and the Prisoner of Azkaban is loved by fans for the way it started the series on a darker tone that lasted throughout the rest of the franchise.

Thanks to having some of the best cinematography in the franchise, this film constantly gives the viewer an eerie feeling like they’re constantly being watched.

The Dementors are more sinister than ever in this film, especially with the way they’re able to skulk around corners with their withering hands.

Some younger viewers may also find Remus Lupin’s werewolf transformation to be disturbing.

Harry Potter and the Chamber of Secrets is famous for having one of the creepiest and skin-tingling spider scenes in movie history.

Although Aragog may not want to hurt Harry or Ron when he’s first introduced, the sight of this giant, talking spider is more than enough to send shivers down your spine.

Harry Potter and the Goblet of Fire is best known for being scary thanks to Lord Voldemort’s rebirth scene.

Lord Voldemort starts as a skeletal, serpentine-like creature and eventually becomes the noseless monster fans know him as today.

What Is The Best Age To Introduce The Harry Potter Series To Children? 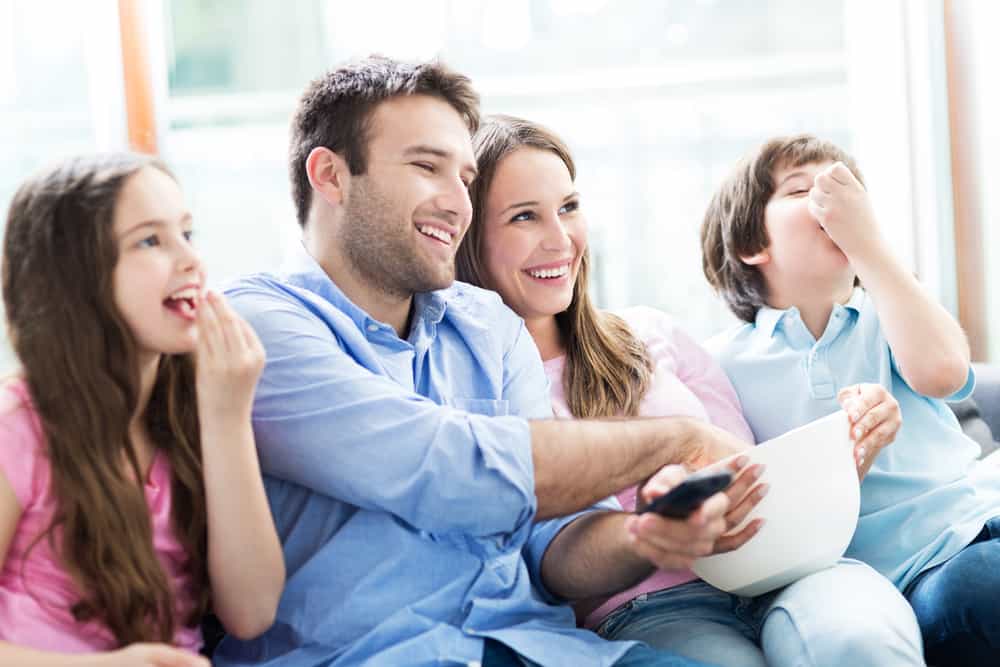 The best age to introduce children to the entire Harry Potter franchise is at least 12 years old, but there is related content that can be enjoyed by younger ages.

The Harry Potter franchise is meant to be a franchise that young readers can grow up with.

The earliest age that you can reasonably introduce your children to Harry Potter is between 7 years old and 9 years old.

At this age, your children should be safe to enjoy the first 3 mainline books and spin-offs such as the first Fantastic Beasts and Where to Find Them and Quidditch Through the Ages.

Once the movies begin to become darker, it’s best to wait to introduce them to the series until they’re 10 or 11 years old.

They can also likely watch Harry Potter and the Prisoner of Azkaban.

For those young fans looking for even more content outside the books and movies, 10 and 11-year-olds should be able to appreciate games such as the Lego Harry Potter Collection or the minigames found on Pottermore.

By 12 years old, your child should be able to handle both the contents of the book series and the film series.

Some younger viewers may need their parents for the mature films, such as the Harry Potter and the Deathly Hallows films. 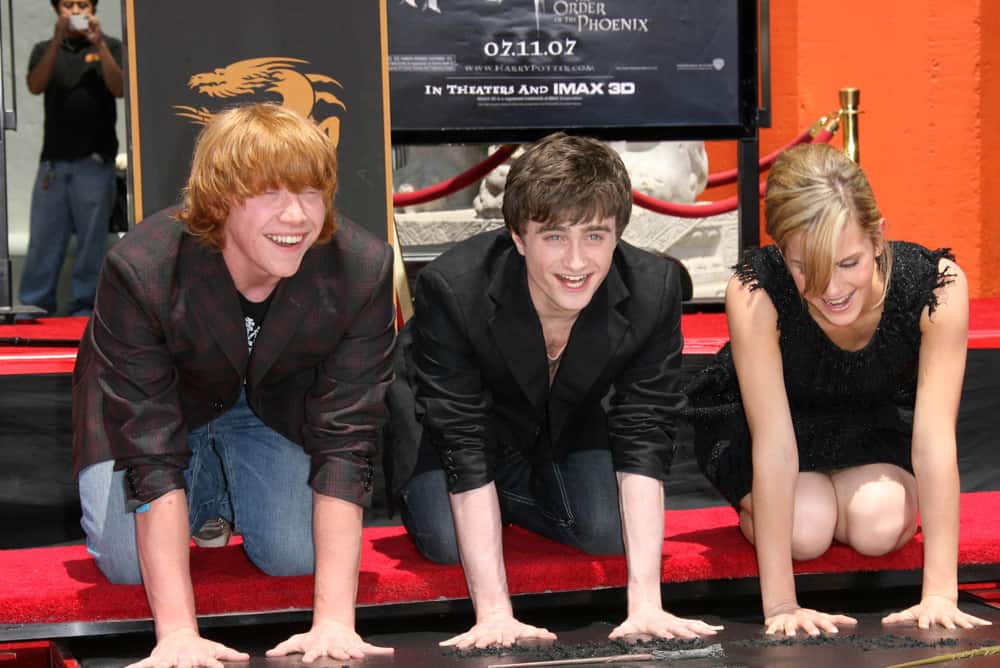 Yes, the Harry Potter cast have remained friends over the decades and are frequently seen supporting one another.

Even though filming for the mainline franchise may have ended in 2011, different groupings of the Harry Potter cast have been seen together all over the world.

In December of 2014, Matthew Lewis had a mini cast reunion with Bonnie Wright and Tom Felton.

By March of 2015, Tom Felton had met up with Rupert Grint, Bonnie Wright, and James Phelps.

Wright went to support Daniel Radcliffe in July of 2016 during the run of Radcliffe’s play Privacy, where she met her old co-star backstage.

The actress felt that Radcliffe did an incredible job showing the importance of ensuring that Google and other internet-based services aren’t spying on you.

Felton posted a selfie he took with Lewis and Emma Watson while they enjoyed a night on the town, captioning the group selfie with “#hogswartsalumni” in April of 2018.

He and Lewis were hanging out again in August of that same year, with Felton handing a jokingly exhausted Lewis a Slytherin bag in an attempt to “convert” his former co-star.

Daniel Radcliffe received even more support from his former co-stars when he released his play The Lifespan of a Fact.

Tom Felton was one of the first co-stars to see Radcliffe perform live and felt that his on-screen rival was “fantastic” on stage.

Evanna Lynch and Scarlett Byrne performed together on Dancing With the Stars during the 27th season of the competition show.

The pair danced as part of a trio alongside Keo Motsepe to Little Mix’s Black Magic.

When Do The Harry Potter Movies Take Place? 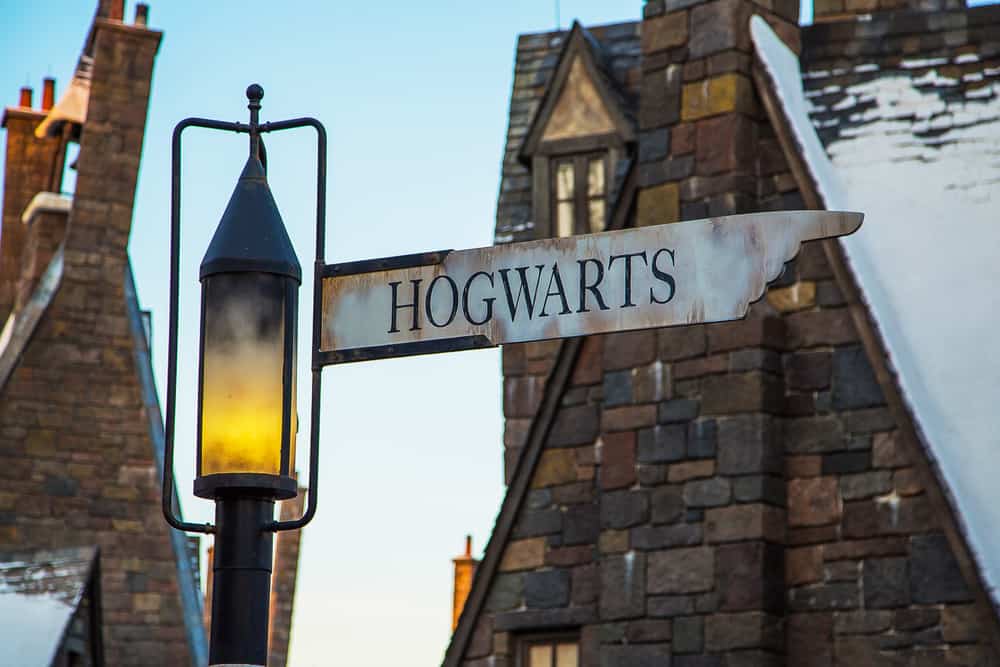 The mainline Harry Potter movies take place during the early 2000s, marking one of the biggest differences between the books and movies.

The books were originally set in the late 1990s, but the movies wanted to be more modern.

The last book was published in 2007, and the last film was released in 2011, which makes matters even more confusing.

Fans who pay close attention to the tombstones from Harry Potter and Deathly Hallows Pt. 1 will notice that the tombstone states that Harry’s parents died in 1981, which would have only been accurate for the books.

This inconsistency is considered to be a mistake made out of “laziness.”

How Long Does It Take To Watch All The Harry Potter Movies? (Explained)