You are here: Home / The Cold Spotlight / How Long Does It Take For Water To Boil? (Explained) 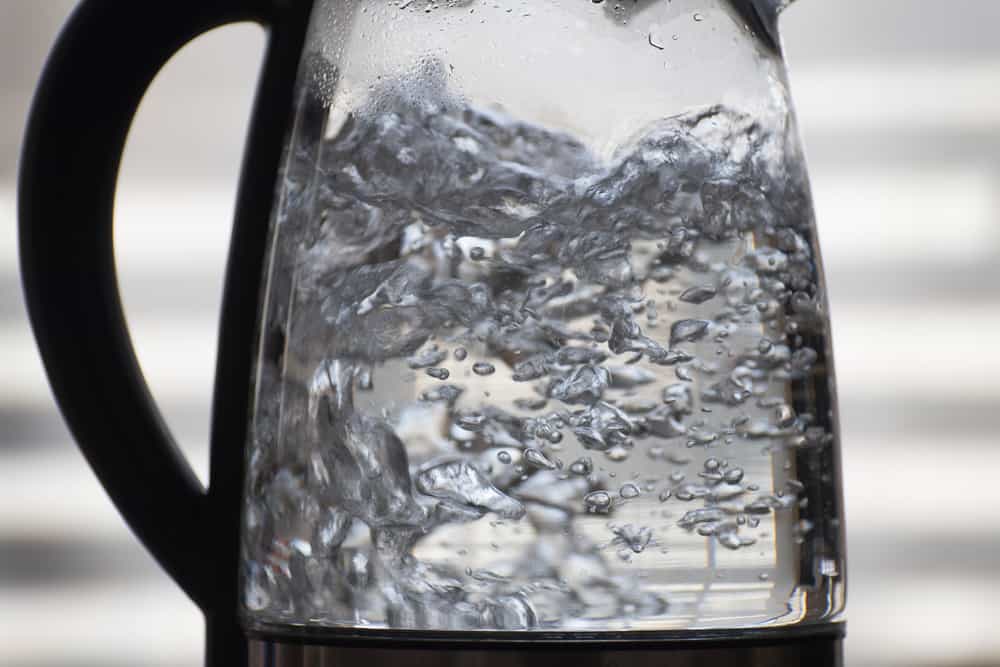 They say a watched pot never boils, and this can sure seem true when waiting for water to boil — it seems to take forever!

However, water will eventually boil, and with enough patience, you’ll be able to use your hot water to cook spaghetti, pour tea, or anything else you need.

Boiling rates are also useful information to have for drinking safe water and using it safely around your home.

How Long Does It Take For Water To Boil? 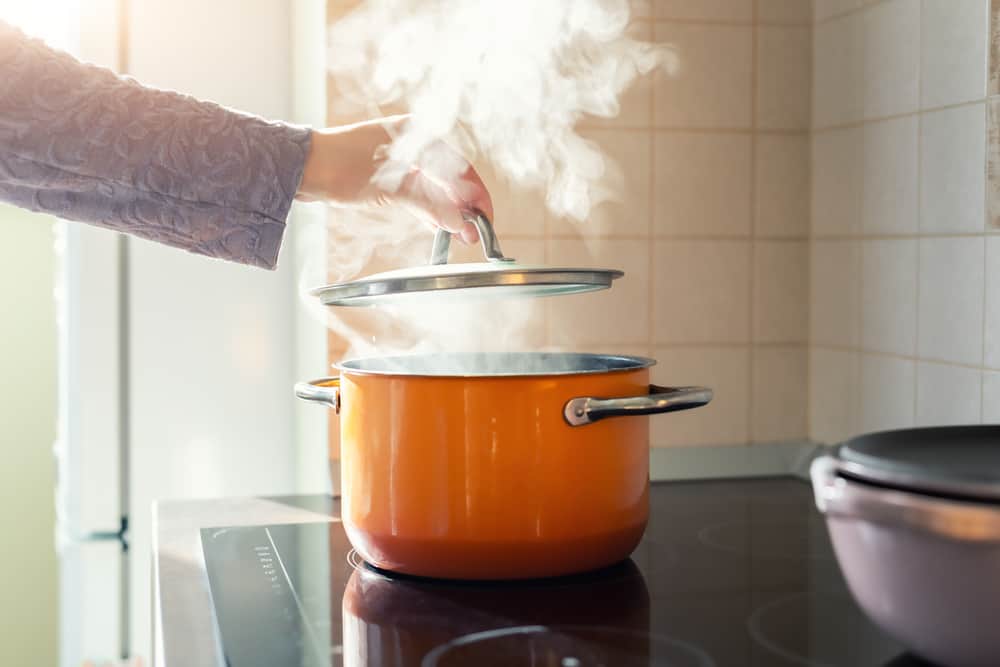 Water usually starts to boil in 5 – 10 minutes when heating it over medium to high heat.

Factors that affect boiling time include the starting water temperature, the temperature of the heat source, environmental factors, containers, and more.

H2O starts to boil, and evaporate, at 212 degrees Fahrenheit at normal altitudes, but this doesn’t always happen at the same rate of speed.

The size of the container holding the water has a lot to do with how fast the water will boil.

Different size containers hold different volumes of water, so, for instance, a smaller pot can only hold a limited amount of water, while a larger pot can hold a substantially larger volume of water.

Because there is less volume to heat, obviously, a smaller pot full of water will boil quicker than a larger pot.

It takes more time for heat to reach and distribute itself throughout the abundance of water molecules in a larger pot, especially those in the middle.

On the other hand, heat is able to quickly reach all the water molecules in a smaller pot and be more effective faster.

In addition to the volume of water in the container, the surface area of the container plays a big role in heating.

In turn, the heat reaches more water quickly and changes the state of the molecule.

This is why the same amount of water will boil faster in a skillet than in a soup pan.

More water comes into direct contact with the heat in a uniform manner.

Why Does Container Material Matter? 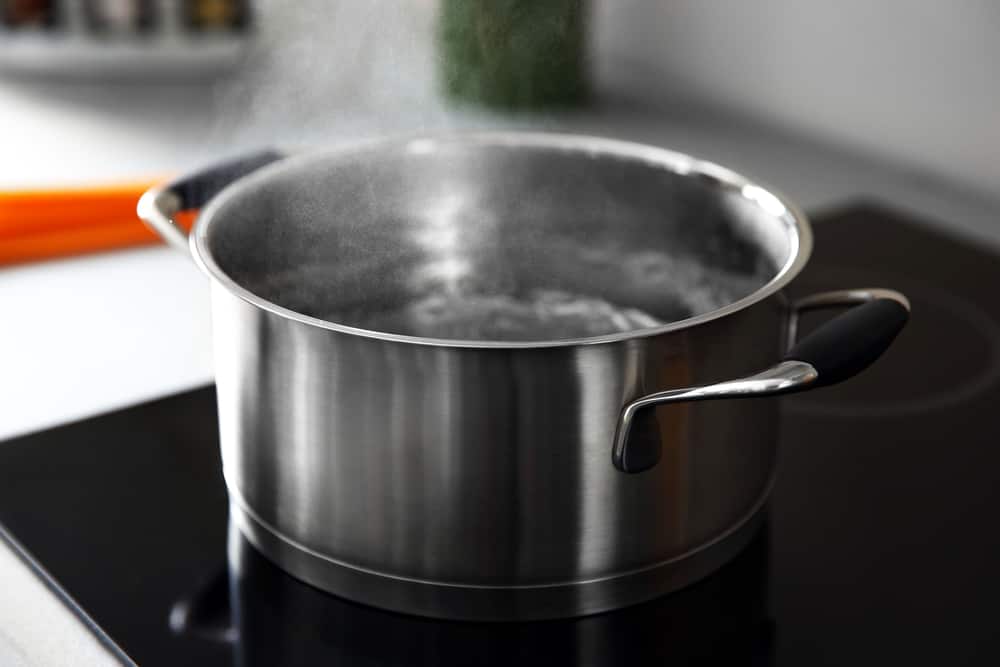 In addition to the size of the container, what the container is made out of also affects how fast it can boil water.

Some materials conduct heat better than others, lessening the amount of time it will take its water contents to boil.

Glass and plastic are both poor conductors of heat, making the process of boiling water in them that much longer.

On the other hand metal containers, like cast iron, aluminum, and stainless steel are great at conducting heat, making boiling times less than others.

How Do Temperatures Effect Boiling Rate? 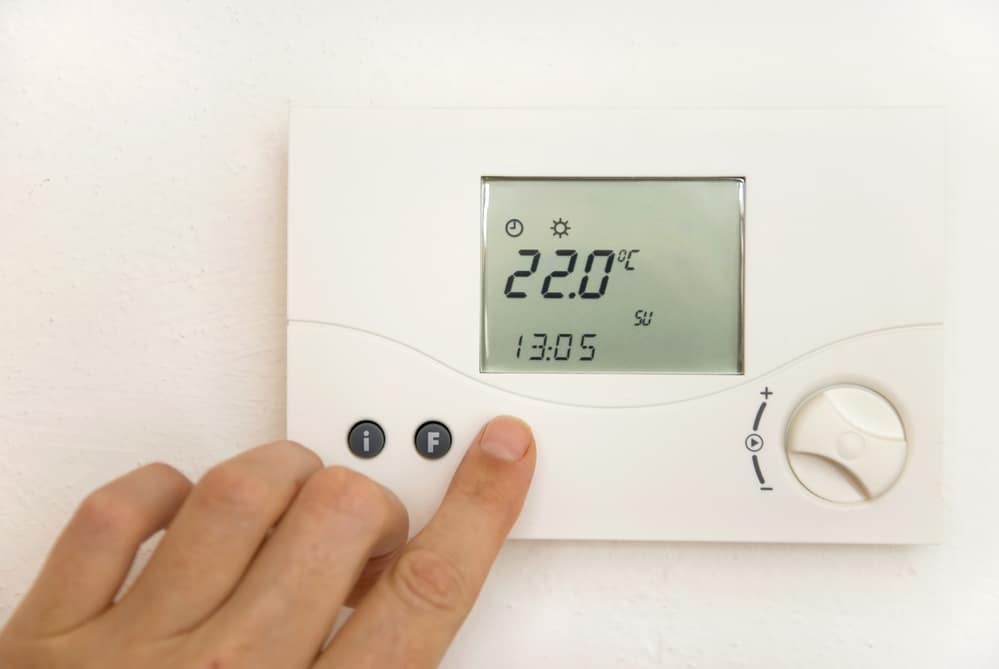 Cooking times for things like pasta are determined assuming that you’re using room temperature water to start with.

Room temperature water is considered to be around 68 degrees Fahrenheit.

So, if the starting temperature of the water is above or below that, boiling times will be affected.

If water is already starting at a hotter temperature, it will take less time to get to the boiling point of 212 degrees Fahrenheit.

If water is starting colder, it will take longer for the water to reach the boiling point.

The other temperature to consider is the heat source.

Simply, the hotter the source, the quicker the water will reach the boiling point.

Heat sources are not all made equally and each one emits different temperature levels.

For instance, a direct flame will probably heat the same amount of water faster than a stovetop. 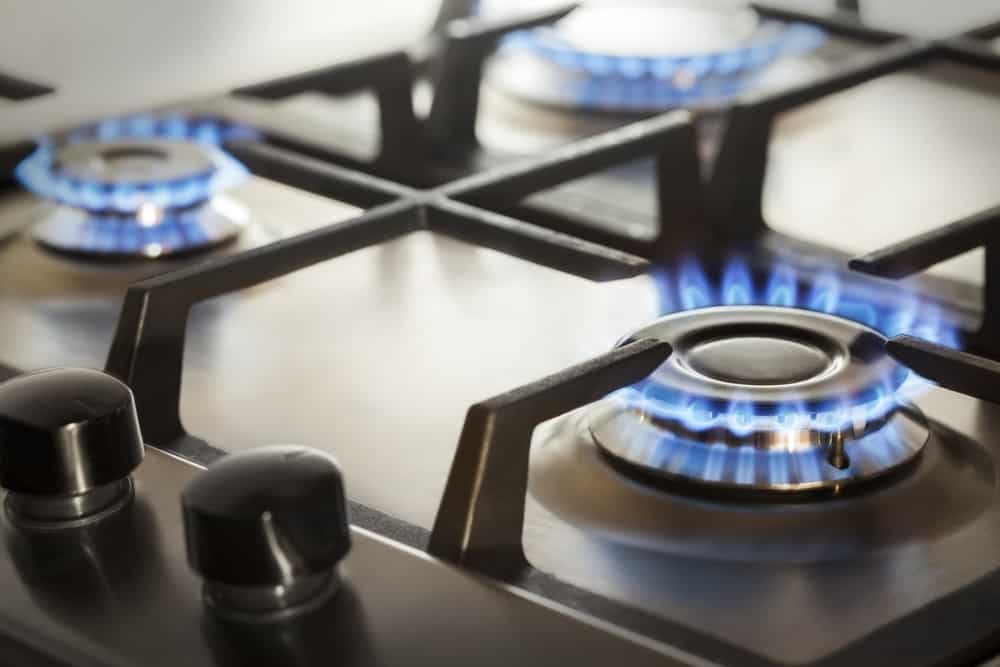 Home stoves are made to only reach a certain level of heat, so boiling rates will vary based on those levels.

This is because fires can generate hotter temperatures than most home stoves.

However, the exact temperature of a fire can change drastically and consistency is hard to maintain.

You might end up burning off all your water before you can even use it.

This is due to a number of reasons.

The main reason is that electric stoves produce a more even heating surface that’s able to distribute heat better across the bottoms of pans, pots, or kettles.

Gas stoves tend to leak heat out of the sides of the burner since the flame is open and not encased.

Heat can easily escape from the burners, failing to heat the intended source.

However, gas stoves make it much easier to control the heat.

Electric stoves stay hotter longer, as they take a while to cool off.

Gas stoves are much better at lowering their heat faster.

In essence, it’s easier to burn food items on an electric stove as opposed to a gas stove.

The extra heat of an electric stove will also contribute to faster water evaporation, drying out your food faster.

Induction stoves are appliances that are fairly new to homes but are great at heating things quickly, including water.

They work when “electricity is passed through a copper coil which then creates magnetic currents that creates heat.”

The heat then transfers directly through the coil to the pot or pan, heating it almost instantly.

Because no heat is wasted this way, induction stoves greatly cut down on boiling times.

In fact, they cut the time it takes to boil water by 50%.

So, if it generally takes your electric stove 10 minutes to boil a pot of water, then it will take an induction stove only 5 minutes.

Plus you can directly control the heat level and temperature on induction stoves, giving you consistent heating results.

What Other Outside Elements Affect Boiling Rate? 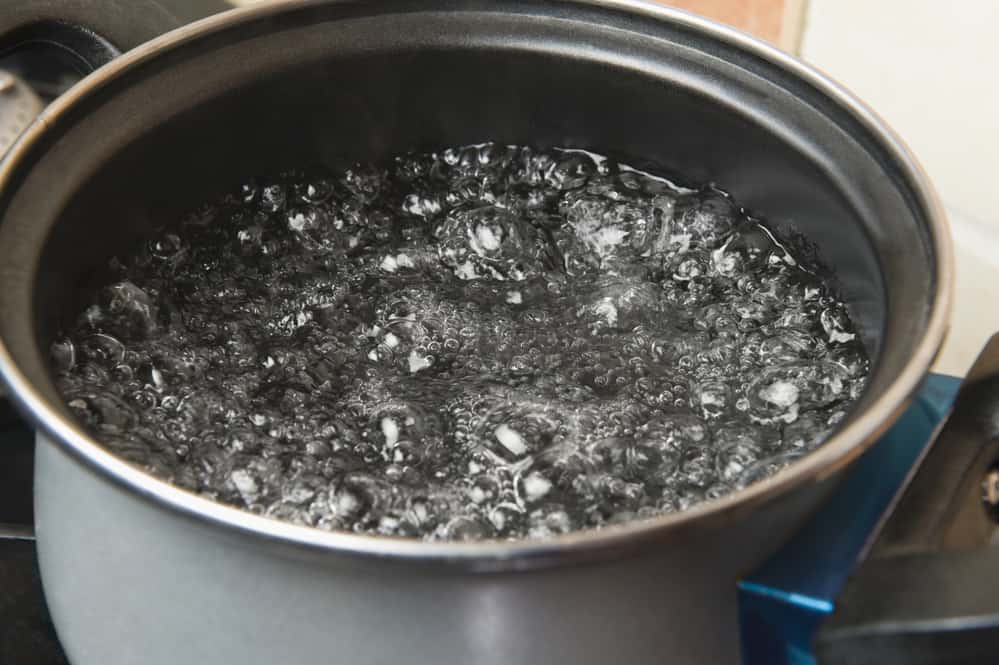 One major influence over boiling temperatures that people often fail to recognize is altitude.

According to the USDA Food Safety and Inspection Service:

This means water boils at a lower temperature when you reach 3,000 feet above sea level, and water and other liquids evaporate quicker.

A good rule of thumb to determine boiling points in higher altitudes is to lower the point by 1 °F for every 500 feet above sea level.

For the sake of food preparation, cooking times will be longer to compensate for the lower boiling point.

This is because foods that cook using boiling or simmering water will be cooking at a lower temperature.

Unless you use a pressure cooker, water cannot exceed its boiling point.

Turning up the heat in high altitudes will only cause your water to evaporate quicker.

Covering your pot of water in high altitudes will help conserve the original volume, as the low humidity in higher altitudes will often cause quicker evaporation as well.

How Do Pressure Cookers Heat Water So Fast? 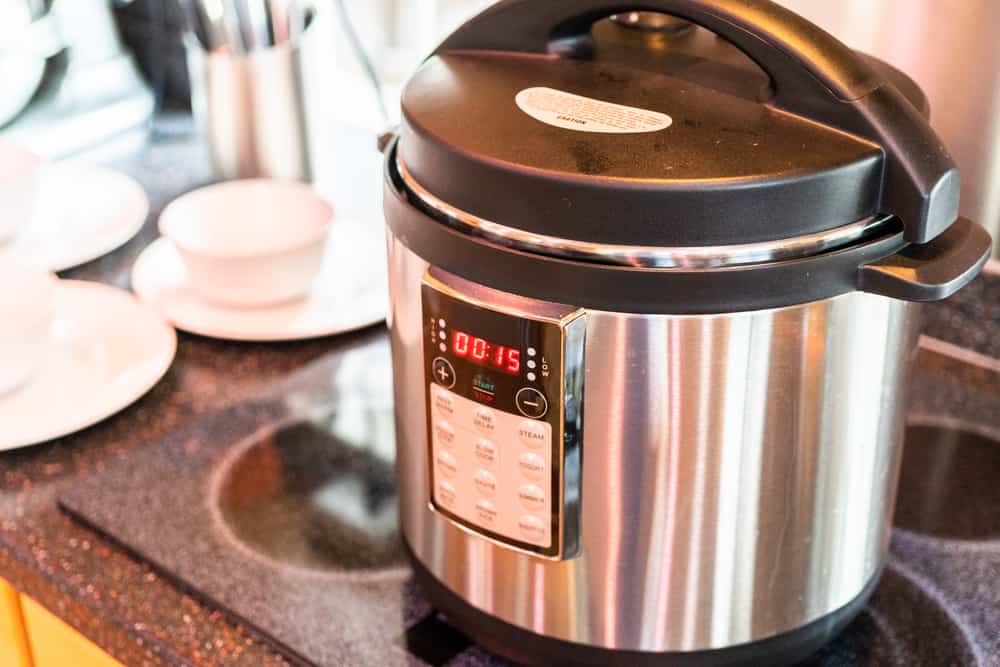 Like induction stoves, pressure cookers can boil water much faster than traditional methods.

Pressure cookers work by trapping steam in a sealed chamber.

The pressure inside the chamber raises as more steam is produced, increasing the normal boiling point to over 212 degrees Fahrenheit.

Because it traps the steam inside, you won’t lose much water volume to evaporation (until you open the lid, of course).

“In a standard American pressure cooker, the pressure reaches 1 atm or 15 psi (pounds per square inch) above standard atmospheric pressure*, or 2 atm, which is typically the maximum pressure limit on most cookers. At 30 psi, the boiling point of water is about 250°F.”

The water itself never really boils, in a traditional sense, inside of a pressure cooker, but instead boils into steam.

Because the steam is trapped, it settles above the contents of the pressure cooker.

However, in higher altitudes, as with boiling water, the way a pressure cooker operates is different.

The boiling point of water in a pressure cooker will be closer to 244.8°F.

This is almost 6 degrees lower than what it would take to boil at sea level.

What’s The Difference Between A Simmer And A Boil? 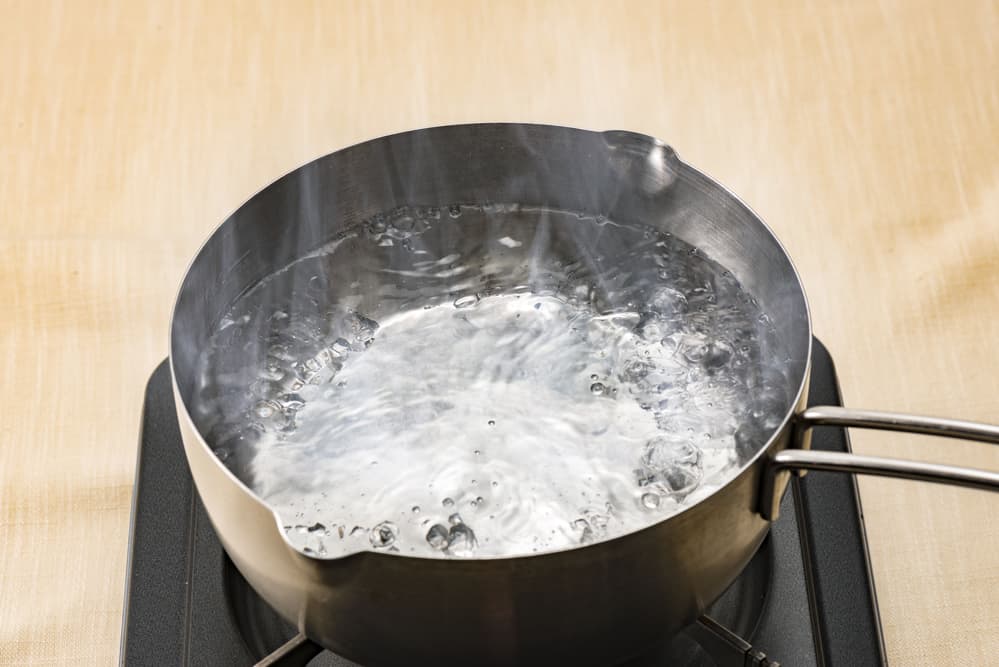 Water temperature and the amount of water molecule movement are the biggest differences between a simmer and a boil.

As we’ve learned, the temperature of the water must reach 212 degrees Fahrenheit before it will start to boil.

Once it boils, water molecules move around rapidly, bouncing off of each other and around the container.

This causes a lot of movement to take place inside the container.

In this case, rapid bubbling will occur as well as evaporation.

A simmer happens when water temperatures rise to between 195 and 211 degrees Fahrenheit, much lower than the boiling temperature.

When water heats to these temperatures, its molecules don’t move quite as fast and don’t quickly evaporate.

Simmering, often called a “gentle boil,” is better for cooking some items, as you’ll be less likely to burn them.

Simmering can occur when a boil is turned down in temperature or when water temperature slowly rises over time.

What Should You Do If You Come Under A Boil Water Advisory? 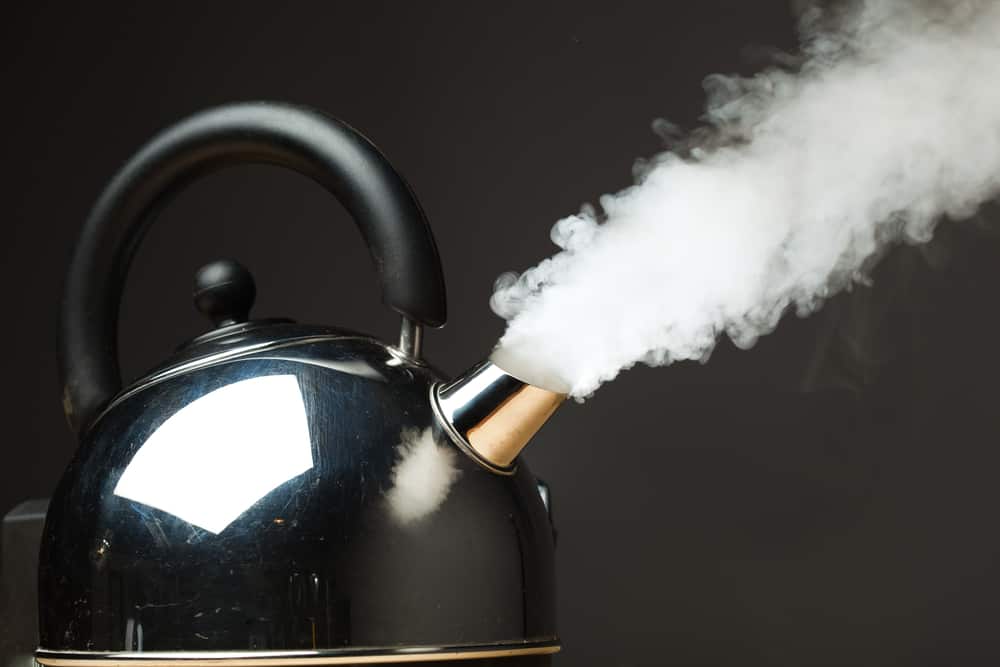 Every so often, drinking water sources become contaminated by a number of contaminants.

When this happens, the city or county you live in will post a Boil Water Advisory.

This means that it’s best if you drink bottled water or boil your tap water before consuming it or using it for any cooking.

Depending on the contaminates, some advisories even recommend using previously boiled water to bathe, wash your hands, or brush your teeth.

To safely boil your tap water for use, it’s recommended that you boil the water for at least one full minute at a full rapid boil, before letting it cool down.

Once it’s cooled down, it should be safe for drinking and other needs.

This includes water from any filtered water source in your home as well, such as from the refrigerator.

If you are in higher elevations, 6,500 feet or above, the CDC suggests boiling your water for three minutes.

How Does Boiling Water Make It Safe? 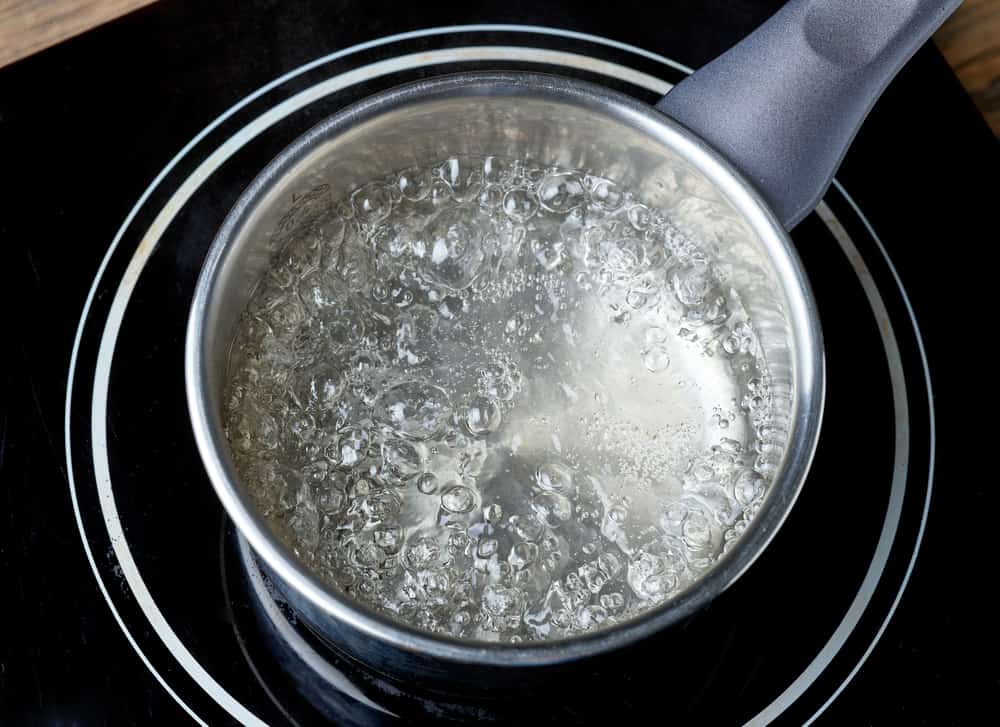 Sometimes harmful substances can invade water supplies, like during a Boil Water Advisory.

Boiling contaminated water works by killing off or inactivating bacteria, viruses, protozoa, and other pathogens that may be present in the water.

The heat damages the structural components of the pathogens, taking away their ability to survive or perform as normal.

Contrary to popular belief, boiling water does not technically sterilize it, however.

Instead, it pasteurizes the water.

This means it kills contaminants that are dangerous to humans while sterilizing kills all organisms within the substance.

For water to be safe for human consumption, it should be boiled at pasteurized water temperatures for a certain amount of time.

For water, that temperature is actually lower than the boiling point of 212 degrees Fahrenheit.

Water can start to pasteurize at temperatures as low as 131 – 162 degrees Fahrenheit.

Each pathogen is killed off at a different level, so to reach full pasteurization, the exact temperature will change.

The time of heat exposure also determines the effectiveness of pasteurization, but times seem to fall between 1 minute and 20.

Reportedly, 99.999% of waterborne diseases can be rendered ineffective after 5 minutes of exposure to 149 degrees Fahrenheit.

How Long Does It Take For Water To Boil? (Explained)