You are here: Home / The Cold Spotlight / Do Hawks Hunt At Night? (Everything To Know) 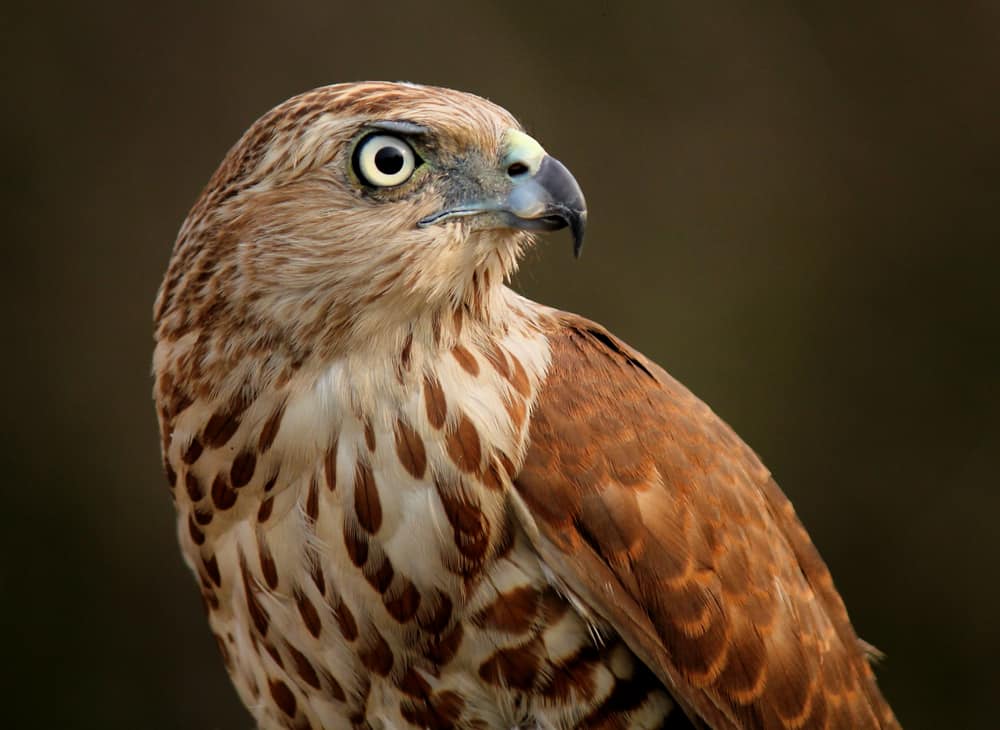 There are 200 different species of hawks across the world.

One of the common traits that all hawks share is when they begin to search for prey.

Do Hawks Hunt At Night? 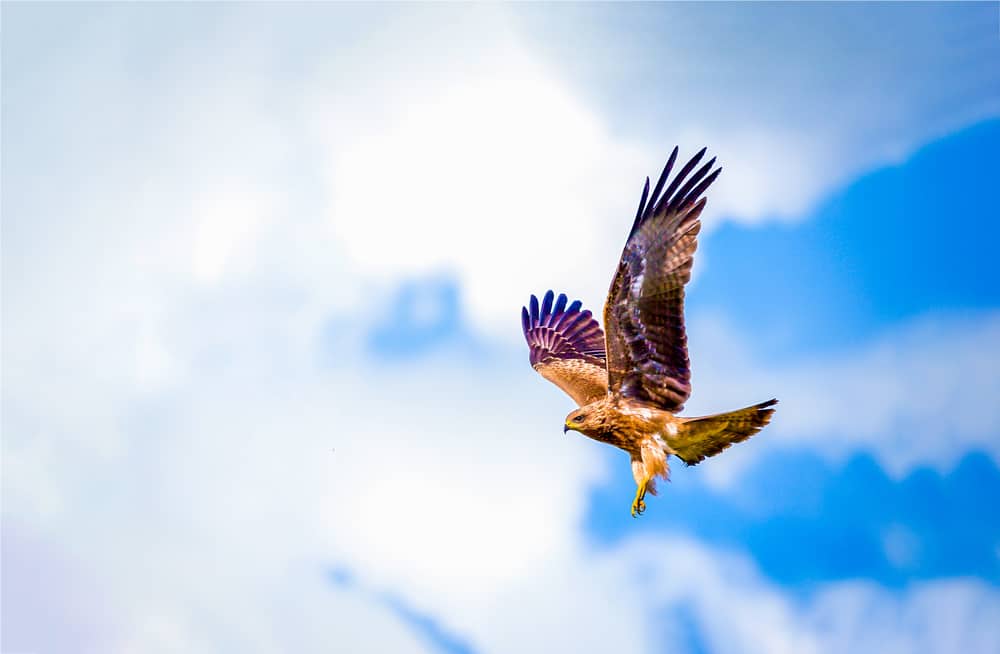 Although some hawks prefer to wait until dusk begins to seep in before they begin their hunt for prey, hawks do not hunt at night.

Hawks hunt during the day, making them diurnal.

Unlike owls or many other nocturnal animals, hawks cannot see at night.

Hawks rely most heavily on their sight to find prey, making it prohibitively difficult for hawks to hunt at night. 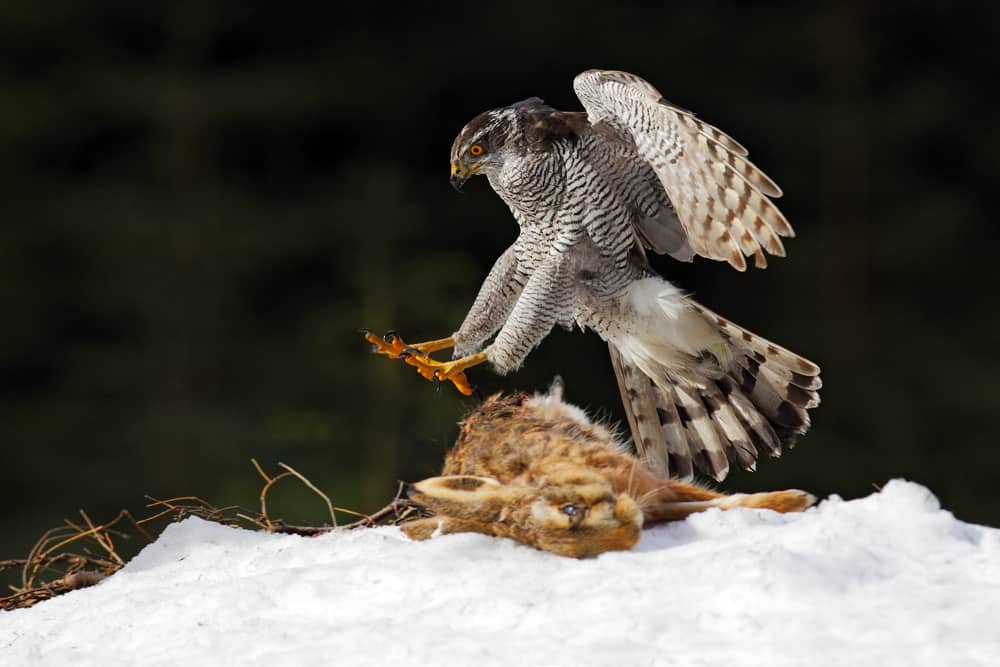 Hawks are no one-trick-ponies when it comes to their hunting.

The hawk has quite a few tactics to choose from in order to catch its prey.

The sharp talons and beak of a hawk aren’t their only lethal feature.

Their intelligence can prove to be just as fatal for their prey.

One hunting tactic of the hawk is to soar much higher than its prey and then swoop down once its target has worn itself out from trying to get away.

This hunting method is for aerial prey like robins and doves.

The Red-Tailed hawk adds its own twist to hunting style.

To speed up the process of tiring out their prey, the Red-Tailed hawk will let out a blood-chilling screech in order to make their prey try harder to run away.

To capture prey like squirrels and rabbits, hawks may choose to soar lower to the ground.

This allows them to quickly swoop down and pluck small mammals off of the ground.

For more cautious animals that live in holes, hawks may choose to hover above the holes by flapping their wings to maintain a certain altitude.

Once the prey comes out of its hole, the hawk pounces on the prey, squeezing it with its sharp, powerful talons.

If a prey animal is hiding for a long period of time, the hawk may choose to perch on a branch, allowing it to hide from its prey.

When the prey feels it is safe to come out, the hawk takes advantage of its position and swoops down quickly. 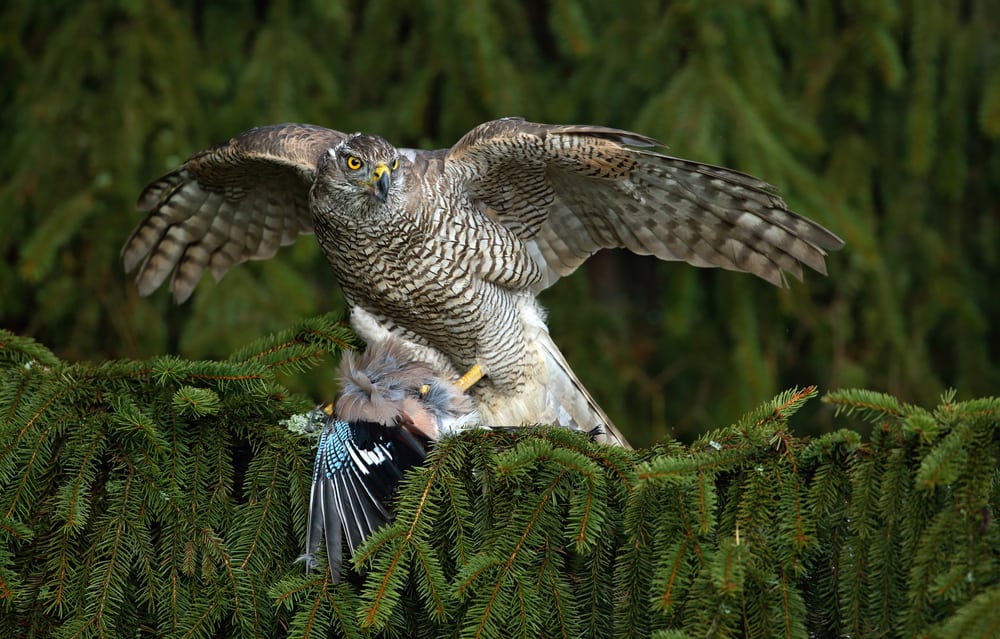 Hawks are elegant, yet fearsome predators in the wild.

Different species of hawks have different diets that are heavily influenced by their habitat.

Almost all species of hawk eat small birds such as robins, blue jays, and doves.

Some hawks are more practiced at the stealth and speed necessary to catch them, like those who belong to the genus accipiter.

Birds that belong to this genus tend to be extremely accurate in the sky, making them excellent aerial hunters.

This can include forest rodents like rabbits, chipmunks, and squirrels.

The bigger the species of hawk, the bigger prey it’s willing to go after.

There have been countless cases of hawks going after people’s small dogs.

There are even a few species of hawk that eat reptilian and amphibian prey.

Common prey could be snakes, lizards, frogs, and even crabs and crayfish.

The Swainson’s Hawk eats most insects, such as locusts and beetles.

Keep Your Pets Safe From Hawks 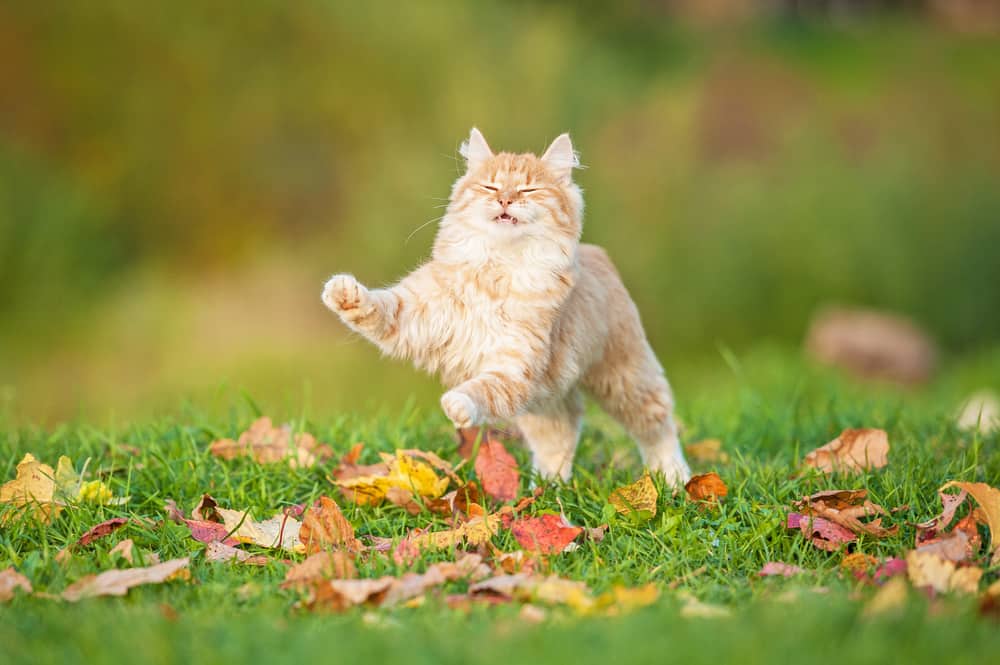 Hawks might seem to be singling out your cats and small dogs for dinner, but they see no difference between your small pet and other small mammals like forest rodents.

Hawks and other birds of prey are the reason you should always accompany your pet while going outside.

Any pet smaller than sixty pounds is at risk of being killed by a bird of prey.

If your pet is under twenty pounds, they are considered to be at a much higher risk of being killed and taken away by hawks and other birds of prey.

However, it isn’t difficult to deter hawks from going after your pet.

If you are looking for a safe way to give your pet some alone time outside, then you should consider building a covered enclosure.

Make sure your enclosure has a roof, a shelter for your pet to hide in, and fully fenced sides.

If an enclosure is not an option for you, the area you let your pet out in should have a canopy with plenty of trees to block the view of hawks.

Bringing out multiple pets at once and setting up shiny, silver streamers around your yard also helps to deter hawks.

If a hawk becomes a problem for you and your pets or livestock, contact your local wildlife organization for the steps you should take for your area and situation.

They may be able to capture and relocate the hawk.

Remember that it is illegal to kill hawks, according to the Migratory Bird Treaty Act. 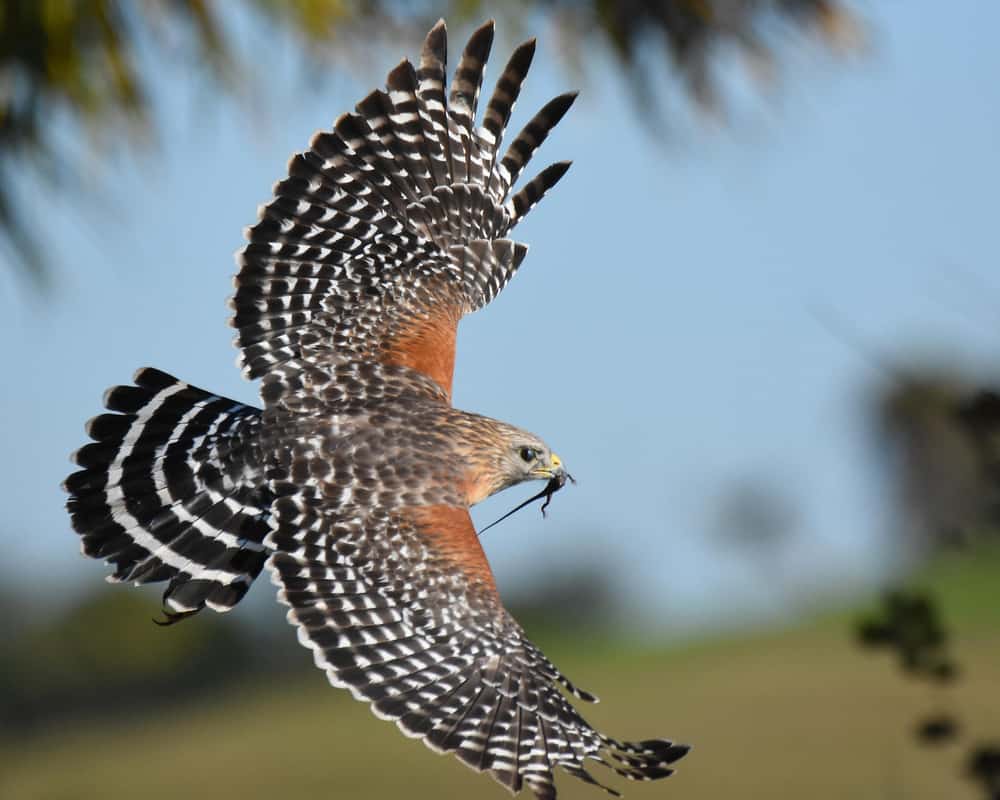 Out of the 200 different species of hawks, more than 20 of them are considered endangered.

There are a few reasons for the concerning decline in the hawk population.

As is the case for the rest of the endangered and extinct species, humans are the deadliest predator hawks face.

The rapid increase in deforestation followed by urbanization has taken away the homes of hawks and their prey.

With nowhere for their prey to live, the hawks’ food supply has diminished and become harder to get safely.

Not only can hawks not find food, but they can’t even find a place to live.

Hawks are often seen as trophy kills to sport hunters.

The rarer and more majestic the hawk, the more trophy hunters desire to add them to their collection.

Hawks like the Hawaiian hawk and the Red-Shouldered Hawk‘s biggest threats are poachers.

Hawks are also being poisoned at alarmingly high rates by farmers who use harmful pesticides.

Some farmers are even purposely poisoning hawks in order to keep them from taking any of the livestock, like chickens.

Such actions are illegal and the protection of pets or livestock is not considered an acceptable reason to kill a hawk in the eyes of the law.

The Most Endangered Hawk 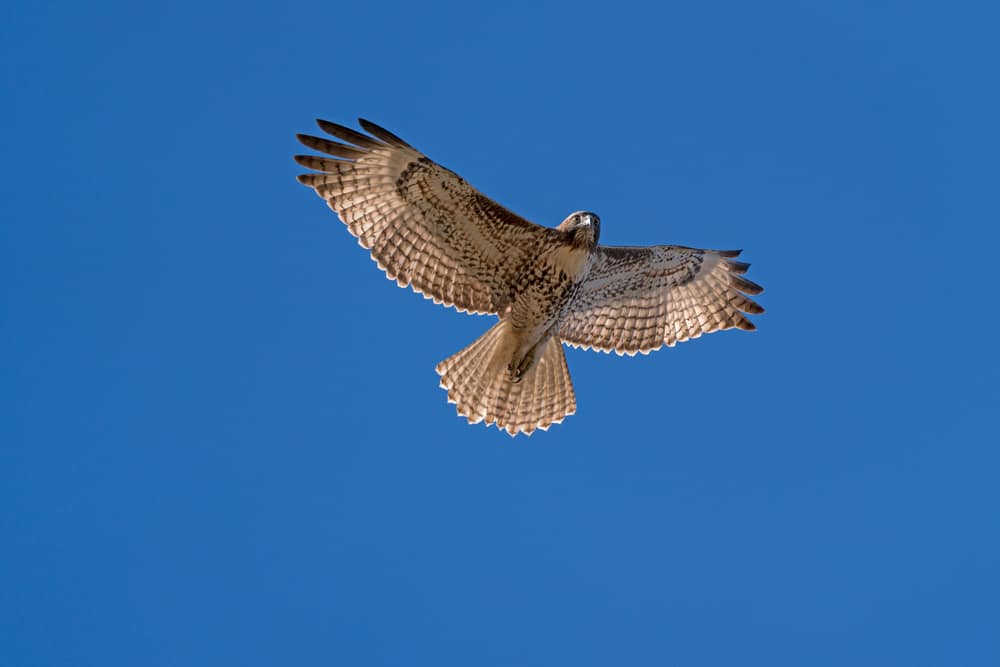 While most species of endangered hawks are considered to be classified between vulnerable and endangered, one species of hawk is about to become extinct in the wild.

This is the Ridgway’s hawk.

Sadly, there are fewer than 500 of them in the wild currently.

You can identify a Ridgway’s hawk by the coloring of its feathers.

Both male and female hawks share brownish-gray feathers with grey feathers across its chest.

Males also tend to have reddish thighs while females tend to be bigger than males.

Deforestation has been the biggest threat to the Ridgway’s hawk, much like many other hawk species that face extinction.

Fewer than ten percent of all the Ridgway’s hawk’s original forests still exist.

The need for farmland and lumber to help process charcoal has left the Ridgway’s hawk homeless.

Luckily, Sierra de Bahoruco National Park and Los Haitises National Park have stepped up to help provide a home and proper ecosystem that is needed to increase the Ridgway’s hawk population.

Their efforts have already begun to show impressive progress.

Natural Predators Of The Hawk 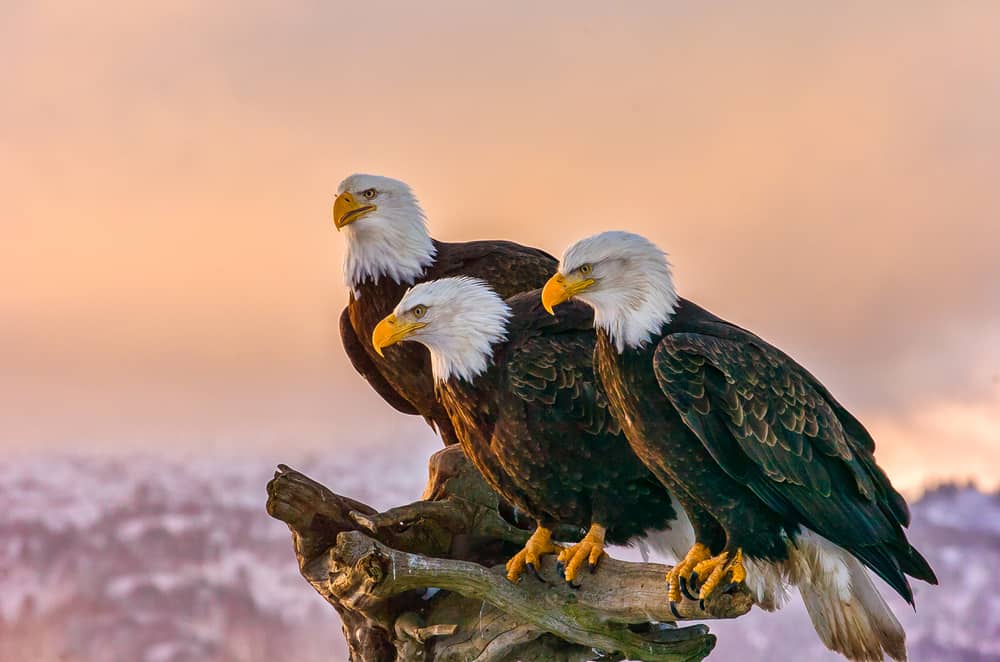 Hawks aren’t the biggest and baddest animals in the ecosystem.

Humans may be the hawk’s biggest and most lethal predator, but we are not their only predator.

In the same way that hawks go after smaller birds, eagles often make hawks their aerial prey as well.

Eagles may be one of the few creatures to eat hawks, but they are not the only threat that hawks face.

In the wild, owls and crows have also been spotted fighting hawks for sport.

Diurnal hawks often have their nests knocked over by nocturnal owls while the hawks are sleeping.

Owls are not the only threat to hawks’ nests.

Hawks often have to fight raccoons and snakes to keep their eggs safe.

Hawks aren’t even safe from their own kind.

Different species of hawks have different levels of territorial behavior.

While some species of hawks may hunt together, others will fight each other to death over territory.

Why Hawks Are Important To Keep Around 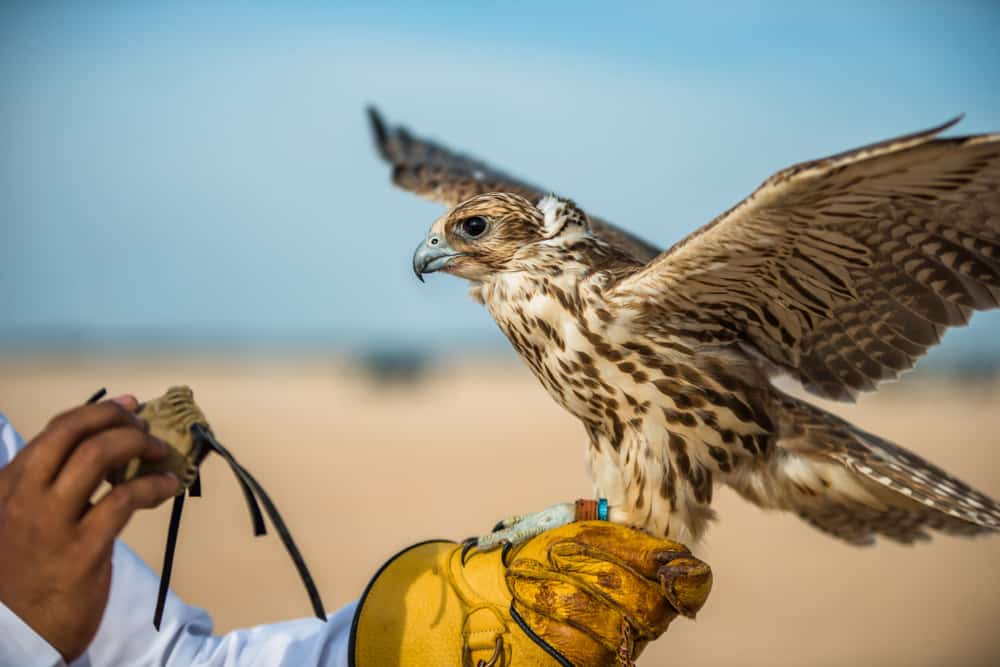 Although hawks may seem like cruel, murderous monsters, the more we begin to understand hawks, the more we see that they are just like any other animal.

Hawks simply do what they do to survive.

The survival of the hawk is crucial to maintaining our ecosystems.

The importance of an ecosystem maintaining its balance is not thought about enough.

Similar to how wolves keep the deer population under control, hawks keep songbirds and rodents from overpopulating your local ecosystem.

If small birds and rodents became overpopulated, that would destroy their food source, eventually killing all of them as well.

Hawks are extremely sensitive to changes in their local ecosystem and can often spot the changes even before humans can.

For this reason, hawks are often used as ecological gauges.

Hawks are often the first ones to notice chemical spills or other types of pollution.

Not only can chemicals seep into the water that the local wildlife is drinking, but they can soak into the prey of the hawks as well, poisoning the hawks when consuming the tainted prey.

Although there are many farmers who look to kill their neighborhood hawk, the hawk is actually helping them more than they know.

Many hawks are too small to go after normal livestock, with the exception of livestock fowl.

Hawks eat the creatures that eat farmers’ crops, such as mice and insects.

Keeping your fowl livestock safe from hawks is actually quite easy.

Just build a coop with a fenced enclosure, and if you take your chickens out of their enclosure, stay with them to deter hawks and other birds of prey. 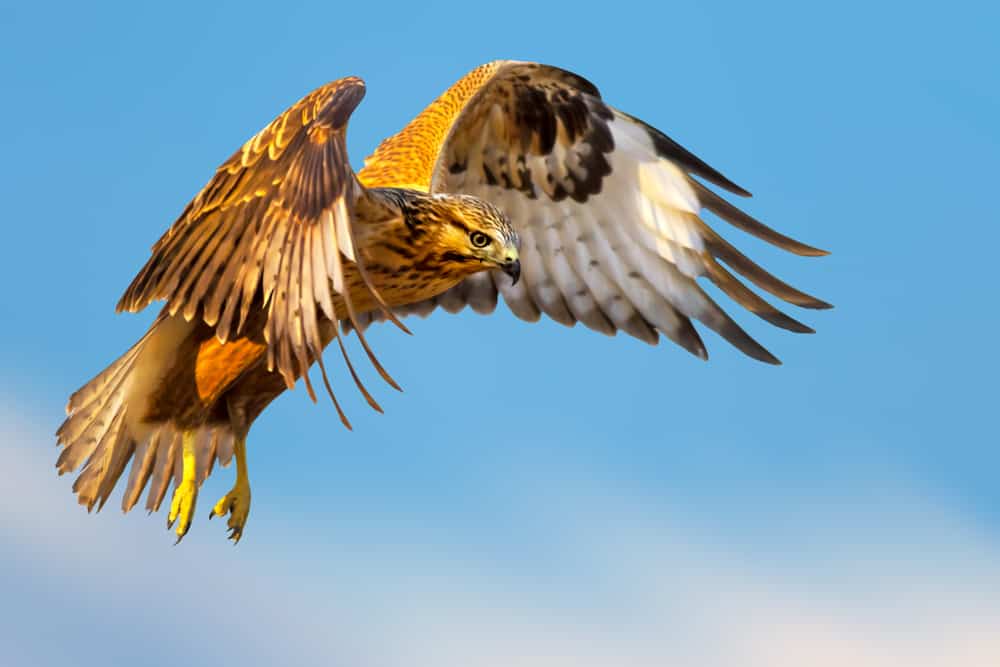 Hawks are a crucial part of our ecosystem and are incredibly interesting to study and learn from.

These daytime hunters ensure that local ecosystems are balanced and can tell when something is going wrong before humans can.

These beautiful birds of prey are misunderstood and underappreciated, which has led them to become endangered.

Hawks are intelligent and tactical predators who use a multitude of methods to capture their prey.

While it is important to be mindful of their presence if you have small pets, hawks are helping you vastly more than they’re hurting you.

These diurnal aerial hunters deserve to have their species live on for future generations to learn from and enjoy.

Do Hawks Hunt At Night? (Everything To Know)