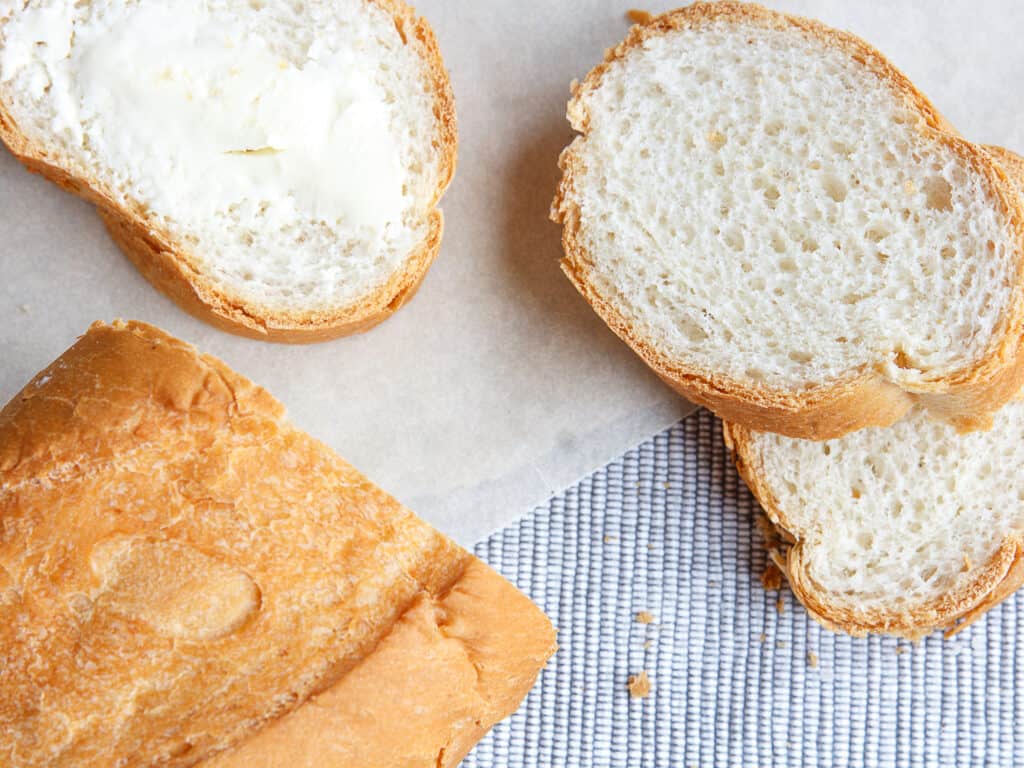 If you are heading to the grocery store and you put “French bread” on your list, it’s like writing “meat.”

There are so many different types of French bread that you really should be able to clarify the kind you are looking for.

Luckily you have us to help you with that.

We put together a list of about 15 different types of French bread.

If you are not hungry by the time you get to the end of this list, we will be incredibly surprised. 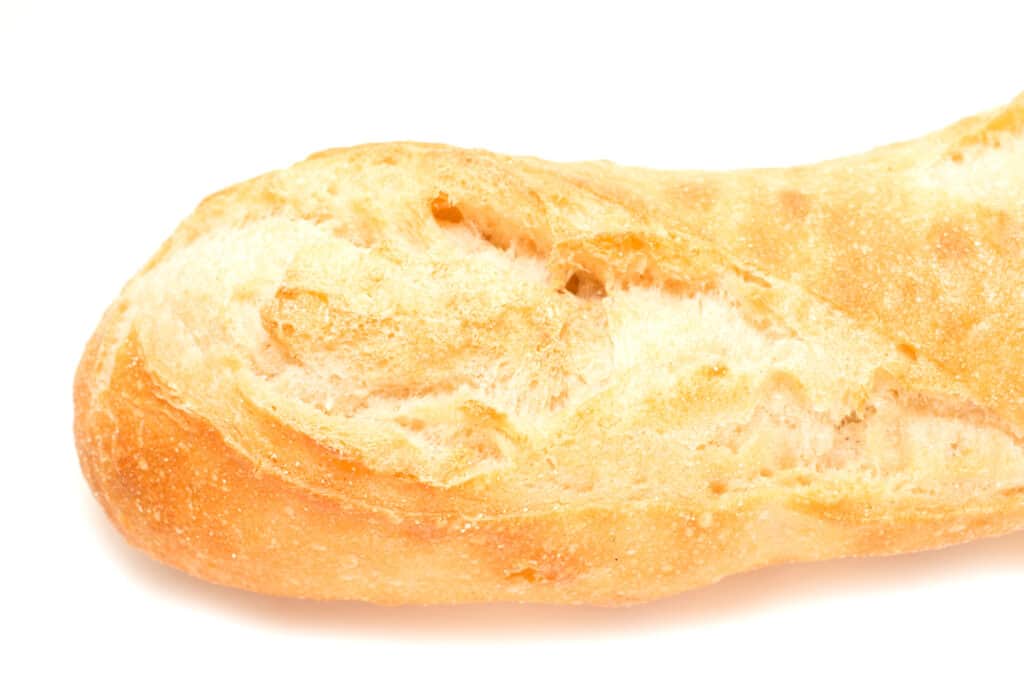 When we told you that you need to clarify your French bread on your shopping list, you most likely had the Baguette in mind.

La Baguette is the most popular type of French bread and what most would consider to be a classic choice in France.

The Baguette is different than other French bread in that it is long and skinny.

Usually, it is about two inches wide but closer to two feet in length.

The Baguette is a crispy type of bread, but if left out for more than a day or so, it gets a bit chewy.

If you want to get started in the world of French bread, the Baguette is the place to start. 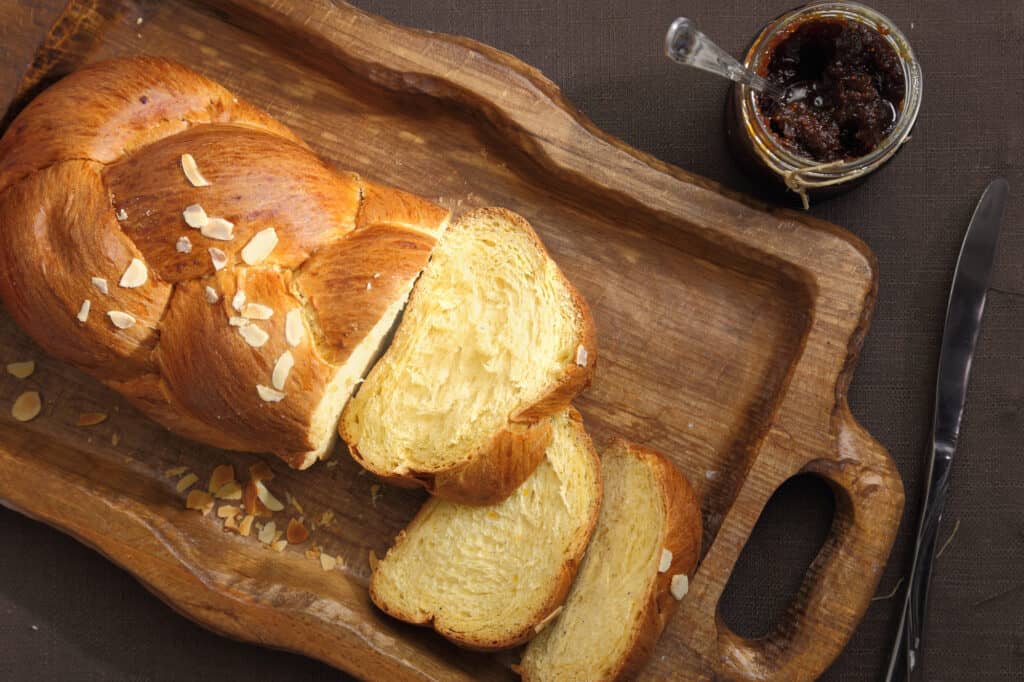 Moving from the crispy and thin Baguette, we have the Brioche.

Brioche is a sweet bread with a much more fluffy and lightweight texture than the Baguette.

Brioche works quite well for both breakfast and lunch; however, there is one dish you may have already had with Brioche.

French Toast made from Brioche is an incredibly tasty treat.

With the sweetness of the Brioche combined with the flavors in the French Toast, this a perfect breakfast.

Brioche is made with lots of butter and eggs, and that is partly why it works so well for making French Toast.

Brioche is a taller and thicker loaf of bread than some of the other types, and it usually has a golden yellow color on the outside.

A Ficelle looks a bit similar to a Baguette, but it is not the same.

The Ficelle is known for its classiness, and having a piece of this bread usually means you are going to be following it up with a high-end meal.

Even though the Baguette itself is thin, this will be about half the size.

The outer crust is very crunchy, and the small interior is soft.

Some Ficelles are made with sourdough, but that is not always the case.

Again, just like the Baguette, you will not want to let the Ficelle sit for more than a few days before you consume it.

If you ask us, that won’t be a problem at all! 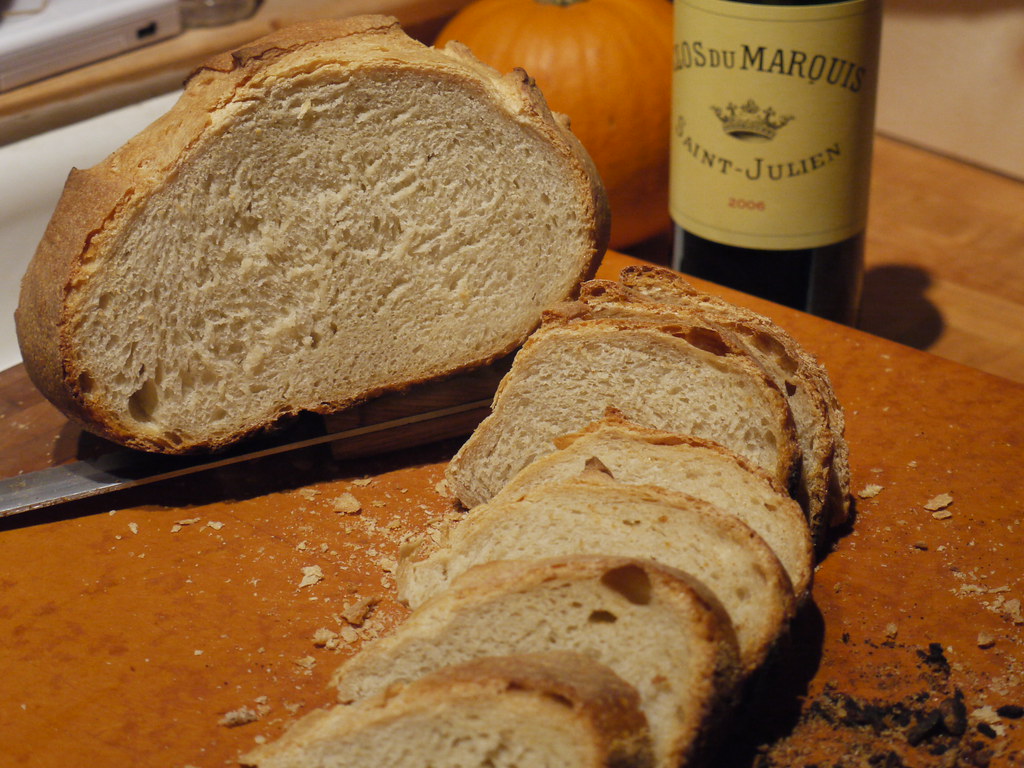 This is typically seen as a circular loaf like most sourdough.

Since this bread does have a bit of a sour flavor, you will have to decide carefully which meals to plan with it.

There will be better French bread options out there to eat for breakfast, but the Pain de Campagne works well for lunch and dinner.

Many people will use the Pain de Campagne to make delicious bread crumbs for salads.

It also can be sliced to use for a sandwich.

This is not a very lightweight and fluffy bread.

In fact, the center is quite dense and a bit heavy.

The outside of the Pain de Campagne is crusty and hard, and you will notice it is scored several times to allow it to expand.

The beautiful thing about Pain de Campagne is that the large size can help when feeding larger crowds. 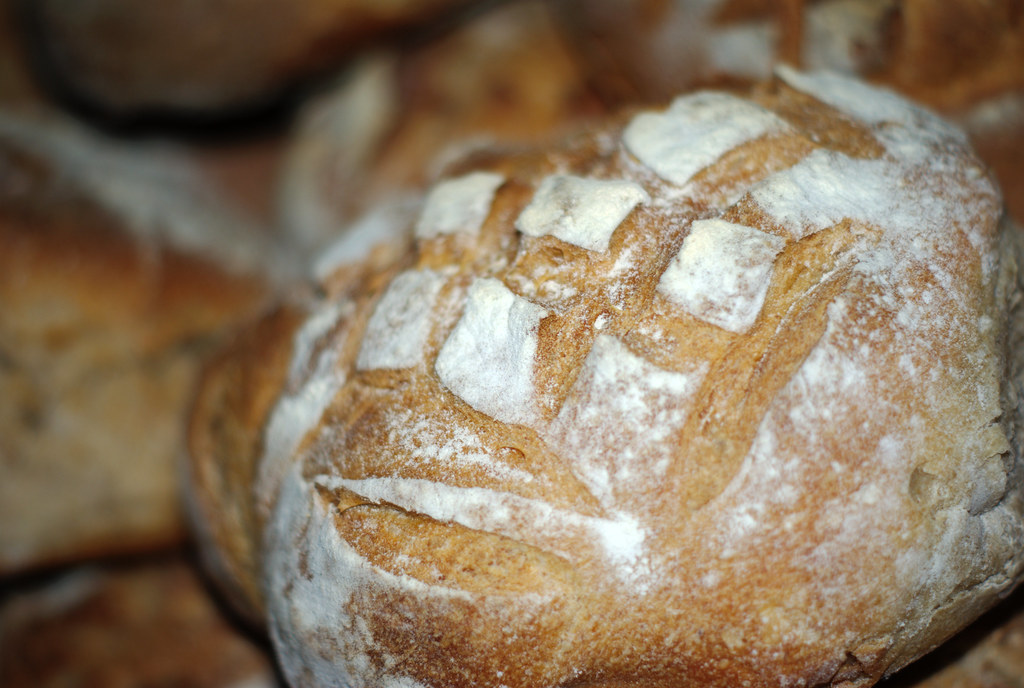 You can think of the Boule de Pain as the mother of the Baguette.

This bread is not as thin as a Baguette, but it will be longer, usually longer than a foot or more.

The Boule de Pain has a very similar taste profile and texture to the Baguette.

The outside will be crunchy with a soft and spongy interior.

Since the Boule de Pain is larger than the Baguette, it will not get chewy quite as fast.

The Boule de Pain can sit out for about three days and still have some excellent texture to it.

You can serve this type of French bread with breakfast, lunch, or dinner.

The Pain au Son is a whole grain bread.

You will notice that this bread is going to be a darker brown than many of the other varieties on our list.

This bread is considered to have a high bran content.

The bran gives it the flavor but also a much higher fiber content as well.

If you could call any French bread healthy, this would be the best choice.

As you may already know, the darker loaves of bread tend to be better for overall digestive health.

Indeed, you are going to be better off eating some vegetables over bread, but this is not a terrible option.

We love the Pain au Son for adding to a brothy vegetable soup.

At least the fact that you are eating a bread with a higher fiber content makes the entire meal an excellent choice.

Usually, the Pain Au Son is going to be sold in smaller loaves that are about the width of typical sandwich bread. 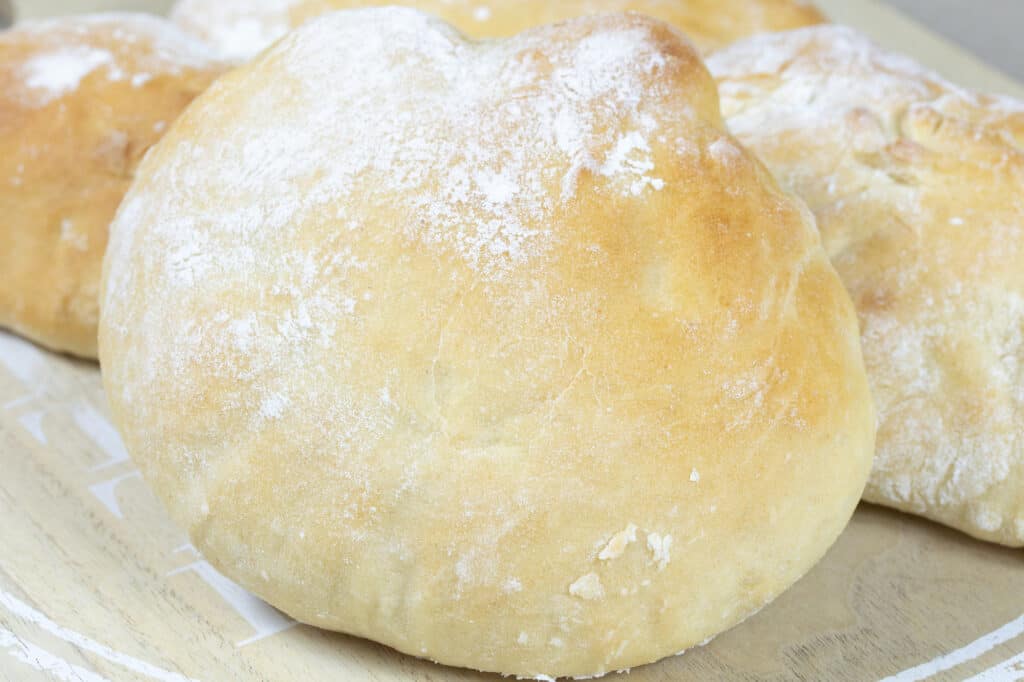 Where the Pain au Son was our healthy dark color bread option, the Faluche is a loaf of white bread.

Faluche is made with all white ingredients, and the fiber content will not be very high.

Faluche is well known as a breakfast meal in France.

It pairs quite well with some butter and jelly for a morning treat.

The Faluche looks a bit different than other French loaves of bread.

It is served in a circular shape and about ¾ of an inch thick.

The Faluche is a great tasting bread that will make you consider all the possibilities for tasty toppings and additions. 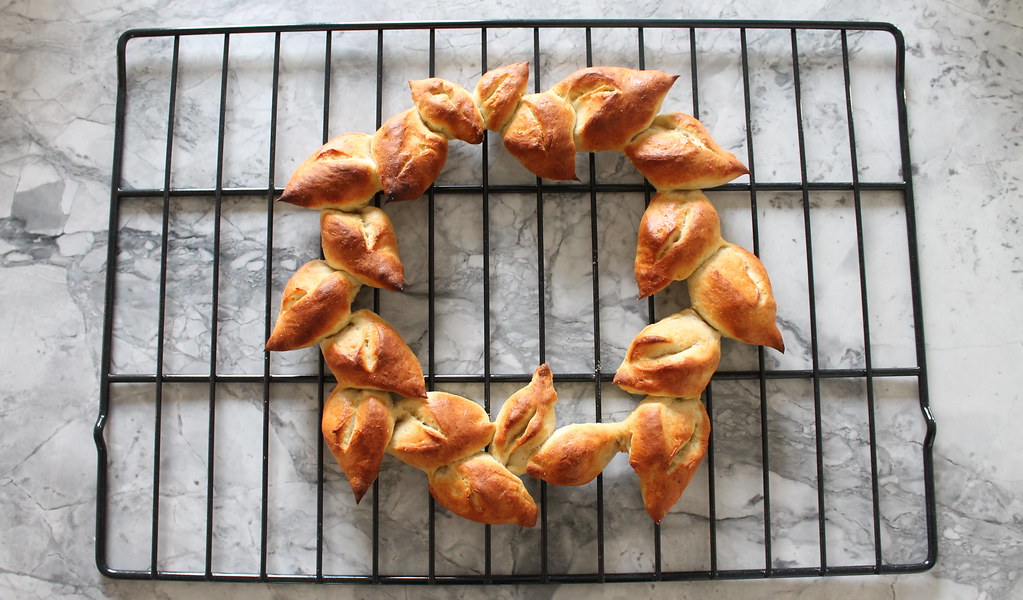 The Pain Couronne is a circular bread.

The Pain Couronne will look a bit like a large ring or even a tire with a large opening in the middle.

This is usually a breakfast bread because of the addition of sugar in its ingredients.

The Pain Couronne can be served as a smaller loaf designed for one person to eat with a morning coffee, or a large loaf to be shared among many people.

The Gibassier is a French Bread, but some may also consider it a pastry.

This is an orange-flavored bread that is served around Christmas time.

Orange is used in preparing this bread.

This is considered to be more of a breakfast type of bread because of its sweetness.

However, you will also see it served at Christmas dinner as more of a tradition.

The orange flavor in the Gibassier is quite strong, and it gives the bread a very distinct and clean taste.

If you feel as though many French loaves of bread taste similar, you will notice a significant difference with the Gibassier.

French Medieval bread fouée, no hand kneading, no proofing, no peel, no nothing. Delicious! https://t.co/r10I7paB8a pic.twitter.com/6QiwKBBD5t

The Fouee is a deviation from the traditional flour and water ingredients in many of the French breads.

Fouee is going to vary from one baker to another, but the main thing to remember is that it will be stuffed with some different ingredients.

Some choose to put mushrooms or butter inside.

Depending on where you are in France, the recipes are going to change significantly.

Where many of the French Breads are a bit hard on the outside, the Fouee is flakier.

This is an easier bread to bite through, and the inside of the bread is quite light.

Although the Pain Brie is made with the traditional water, salt, yeast, and wheat flour ingredients, you will notice it has a much different texture.

The reason behind the different texture is the work that goes into making a loaf of Pain Brie.

This bread is kneaded for an extended period before it is ready to be baked.

The kneading process makes sure the bread stays very dense inside.

The result is a bread that is perfect for dipping into a sauce or soup.

The Pain Brie will last for quite some time because of its texture.

Le Cramique is a French bread that is going to be similar in taste and texture to the Brioche.

It is made with lots of eggs and sugar and butter to give it that fluffy interior texture.

Le Cramique has an extra ingredient which sets it apart from other French loaves of bread.

The ingredient is raisins.

The raisins are baked within the interior of the bread, and that is partly what makes Le Cramique more of a breakfast choice.

Many people will serve the Le Cramique with jam and butter.

The Pain a l’ail is the French version of garlic bread.

The term garlic bread means that garlic is used in the preparation of this bread.

Exactly how the garlic is used, how much is used, or the process in which it is used is left up to the chef.

The one constant you can count on is that if you are eating Pain a l’ail, you are going to need a mint afterward.

The garlic gives this type of bread some fantastic flavor.

Even though we are talking about different types of French bread, the Pain a l’ail pairs very well with an Italian pasta dish.

If you search for some recipes for Pain a l’ail, you will notice the wide variety of uses and applications of the garlic.

Fougasse is unusual in that it has some ties to a modern pizza.

There are many ingredients in the Fougasse, and it will have a robust herb flavor.

Most of the time, it is made with thyme, sage, sundried tomatoes, olive, and even rosemary.

The Fougasse is sometimes served with cheese on top, and many people say this is essentially a French calzone.

The Fougasse stands out from other French loaves of bread in its complexity of ingredients.

Where many loaves of bread are simple, three or four ingredients, the Fougasse can get quite involved.

Some recipes will call for anchovies and even bacon.

When you eat a Fougasse, you are going to want to consume it immediately after baking.

Many of the other French breeds on our list can be served at various temperatures, but this is best served warm.

The bread is good plain, too.

The Miche is very similar to the sourdough except that it uses a combination of flours to get a unique taste.

Some bakers will use whole wheat, and others will even use rye to make this Miche stand out among other French loaves.

The Miche is a large loaf, and similar to a sourdough, it will be round.

If you are feeding a large family, you will like the number of servings the Miche loaf can provide.

Another great thing about the Miche is that it has a bit more fiber than some other white bread options.

You may also like that this loaf will be able to sit out for a few days without going bad.

It is recommended to let it sit for a full 24 hours before you even slice it open.

Hopefully, our list of the different types of French Bread has at least helped you make your grocery list a little more accurate.

Next time you think of French bread, hopefully, it is a bit more in-depth than it was before our guide. 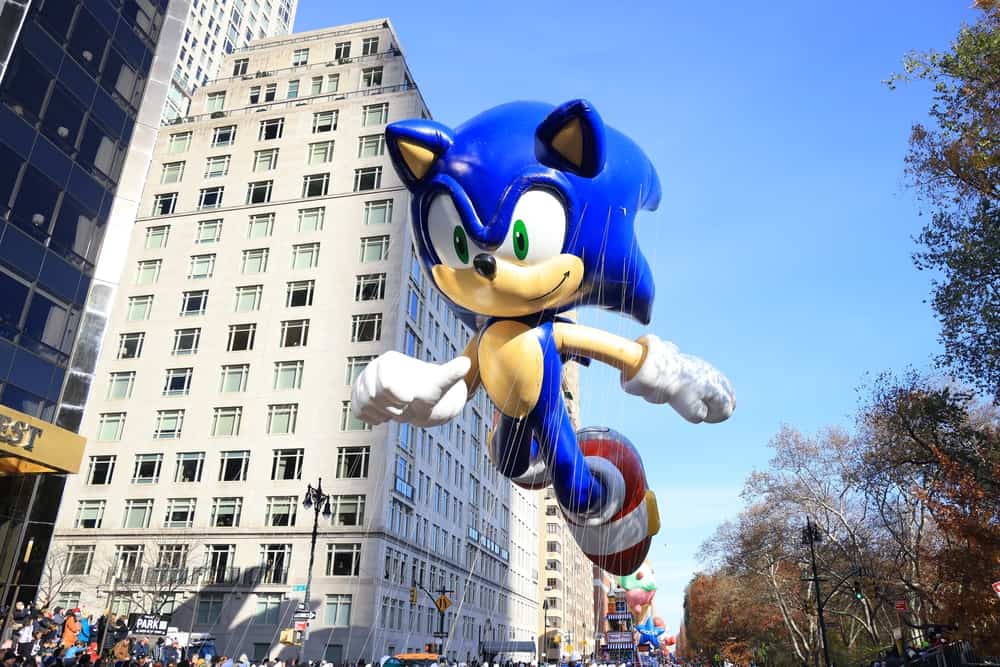 Why Can’t I See Who Liked My Comment On TikTok? (Explained)