You are here: Home / Sports / NFL / Could Aaron Rodgers Be The Next Host Of Jeopardy? 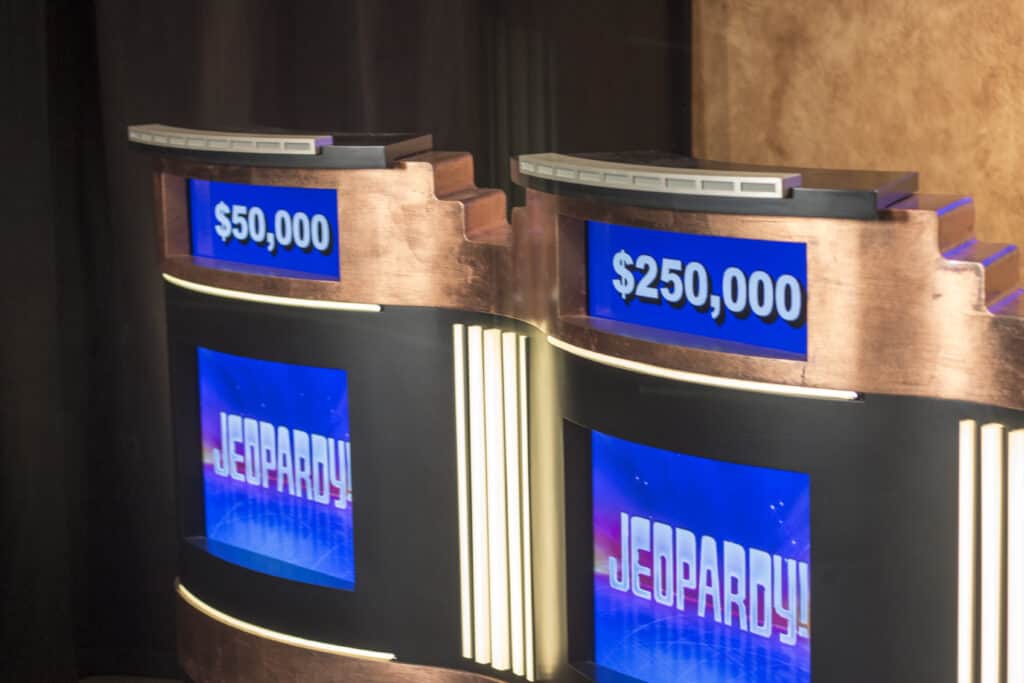 Green Bay Packers quarterback Aaron Rodgers is back on television.

We are used to seeing him on Sunday afternoons in the fall and winter slinging his legendary arm every which way to make magical plays for the Packers.

Now we are treated to seeing him every weeknight for two weeks as the guest host of Jeopardy!.

He is one of several celebrities tapped to guest host the show following the death of legendary host Alex Trebek last November after a long and brave battle with pancreatic cancer.

Rodgers takes the hosting gig seriously and has hinted that he hopes this audition leads to getting the job full-time in the future.

He believes it would not interfere with his football career.

Rodgers explained how it would work.

“No, I’m not going to [quit football]. I just won MVP. I still have a lot left in the tank. I’m still gonna play and I’d love to host Jeopardy! at the same time Jeopardy! films five shows a day, 46 days a year. That’s 230 episodes. And I work for six months out of the year so the other six months I would probably have time to film 46 days I think.”

Could Aaron Rodgers be the next host of Jeopardy!?

Yes, he could, and here’s why.

Everyone knows who Aaron Rodgers is.

Naturally, football fans recognize the future Hall of Famer even if they are not Packers fans.

Rodgers’ celebrity could attract a different demographic and perhaps a newer and younger fanbase to Jeopardy!.

The contestants certainly know who he is.

On the first day of his guest hosting stint, a contestant who did not know the answer to the Final Jeopardy! question decided to make a reference to Rodgers’ Packers and the still controversial decision to kick a field goal in the NFC Championship against the Tampa Bay Packers down by 8 points with 2 minutes left in the game.

Early look: a contestant’s answer during Final Jeopardy: “Who decided to kick that field goal?”

Aaron Rodgers takes it in stride: “That is a great question.”

Rodgers Is A Huge Jeopardy! Fan

It is not news that Rodgers is a big fan of the show.

Rodgers admits to watching the show in his childhood years.

He also admired the late Alex Trebek and has paid homage to Trebek during his guest hosting stint.

“Other than the Super Bowl, this is the honor of a lifetime…Following in the footsteps of a legend is something I know a little bit about.”

Of course, he is referring to following Brett Favre in Green Bay.

Rodgers prepared as an athlete would for a big game, by watching film.

Aaron Rodgers knows what it is like to be a contestant on the show.

He is a former champion, winning the show in 2015.

Back then, it was obvious how much he loved the show and respected Trebek.

Rodgers said he has wanted to return to the show ever since winning it.

“I just saw how special this environment was, and I remembered thinking this would be like a dream job — if Alex ever retired at like 90 — to come back and be a part of this.”

Stephen A. Smith Is Ready To See More Of Jordan Love

Packers Insider Declares It Is Time For A Major Change

Aaron Rodgers Has Fallen Behind A Career Journeyman

Is Aaron Rodgers To Blame For Packers' 4-7 Start?

The Packers Are Getting A Key Veteran Back Thursday

Do The Packers Still Have A Chance At The Playoffs?

Is Aaron Rodgers Officially Washed Up?

OBJ Makes The Most Sense For Packers Now

2 Moves The Packers Should Have Made At The Deadline

3 Moves That Could Save The Packers Season

Should The Packers Have Interest In Elijah Moore?

3 Trades That Could Help Aaron Rodgers

Could Aaron Rodgers Be The Next Host Of Jeopardy?