You are here: Home / Sports / NFL / 3 2021 NFL Draft Prospects Teams Should Stay Away From 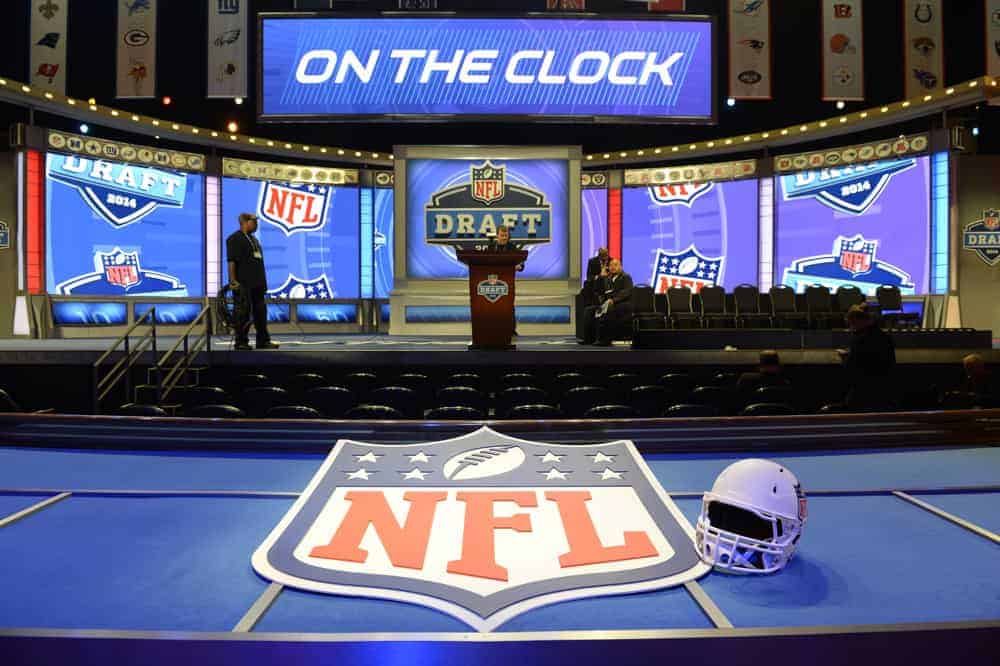 The NFL draft is one of the most exciting times of the year for bad franchises.

It gives them a glimmer of hope for the future.

Maybe the guy they take this year will be a franchise-changing caliber player, but there is always the risk of the pick being a complete bust as well and there is a handful of them every year.

Busts cause fans to lose faith in the organization and especially the front office.

If a team does not have fans they are going to lose out on a lot of profit from ticket sales, merchandise, and viewership.

The draft is the best way to build a team and keep fans happy which is why it is so important and why there is so much media coverage surrounding it every year.

I am going to help out some NFL clubs by examining three prospects who I think NFL teams should stay away from.

Surprisingly, I am probably a bigger Mac Jones fan than most, but I would still steer clear of him in the first round.

I do not think he will be a bust or even a bad quarterback in the NFL, but I think his ceiling is just too low to use a first-rounder on him.

If you find your franchise quarterback and his name is not Tom Brady then you will probably end up overpaying for their services.

Take Dak Prescott for example, he is a fantastic guy to have under center but he is not worth $40 million per year.

Unfortunately, the Cowboys were stuck with that contract because without Dak their team would be abysmal, but now they may not have the money to surround him with enough talent to win a super bowl.

If you draft Mac Jones and he turns out to be a solid quarterback, you will be stuck in limbo until he retires because you will not win a super bowl, but you will not have a high enough pick to draft his replacement with a higher ceiling.

All of the top-tier young quarterbacks are either phenomenal athletes or have a phenomenal arm… or they have both.

Mac Jones is an accurate passer but does not have tools that you cannot teach which really limits his growth in the NFL.

While I am rooting for his success and I expect him to be a serviceable quarterback, I just do not believe drafting a quarterback with that low of a ceiling is a smart move.

Is Mac Jones being underrated?🤔 pic.twitter.com/2ENDKhWonZ

Collins is a massive linebacker coming in at over 260 pounds, but his problem is that I am not exactly sure he has a position, and most prospects that come with that problem have trouble finding early success.

Last year Isaiah Simmons and Zac Baun were praised as being versatile linebackers that could fit in anywhere, but at the NFL level it just means that they are good in a lot of areas, but not great at one position or in one area, so they were not properly utilized.

If a team does not have a plan for Zaven or if they do not execute their plan well, then I would expect him to have a disappointing rookie campaign like the two I previously mentioned.

Horn has been climbing boards and I understand why, he has a great build standing at 6’1″ and 205 pounds with nice athleticism.

He played decently well against good competition but he is just too grabby against good opponents and he will be called for penalties all day long on Sundays.

Some say they like his physicality, but I think that he will not find success in the NFL if he does not lessen his physicality against his assignment down the field.

If he can clean that up I think he will be a good player, but for now it seems to be too big of a part of his game at this point in time.

A Super Bowl Ticket Will Cost Fans A Fortune

1 Stat Proves Why Justin Herbert Has To Be Excited

The Chiefs Overcame A Long List Of Injuries To Win

Joe Burrow Will Look To Continue A Rapid Rise In 2023

The Eagles Blew Past A Top Narrative Sunday

NFL Analyst Declares Who Led The Chiefs To Victory

Tee Higgins Got Love From A Bengals Legend

The Chargers Move Quick And Fill The OC Role

3 2021 NFL Draft Prospects Teams Should Stay Away From